A sweeping story of loyalty and love; as a small group of foreigners are trapped inside the Forbidden City of Peking, under siege by thousands of Chinese fanatics. The courage and leadership of a US Marine [Charlton Heston] and the British Ambassador [David Niven] are the only hope against unsurmountable odds, while a beautiful Russian Countess [Ava Gardner] must choose between freedom and commitment.

Samuel Bronston's ‘55 DAYS AT PEKING’ is an unforgettable tale of un-parallel fury, brought to life with passion, romance, and violence of a historic time.

Andrew's Blu-ray Review: Hollywood filmmaking took a turn in 1953, when Twentieth Century-Fox released ‘The Robe,’ its first CinemaScope picture. Historical epics had been popular since silent-movie days, but the enormous size and scale offered by innovative Super Technirama 70 widescreen technology seemed made to order for an industry now in hot competition with television. Before long everyone from Douglas Sirk’s ‘Sign of the Pagan’ [1954] to Stanley Kubrick’s ‘Spartacus’ [1960] was working on an eye-filling spectacle with a historical theme, and producer Samuel Bronston made them his personal mission, building a studio complex in Spain that was sprawling enough to accommodate the gazillions of stars, extras, and technicians the genre required. Samuel Bronston produced five historical epics during the early 1960s, starting with ‘King of Kings’ and ‘El Cid’ in 1961 and ending with ‘The Fall of the Roman Empire’ and ‘Circus World’ three years later. None brought more problems to its makers than the 1963 production ‘55 Days at Peking’ and directed by Nicholas Ray in Super Technirama 70 with Charlton Heston, Ava Gardner, and David Niven in the leads.

The story takes place during the Boxer Rebellion, or Yihetuan Movement was an anti-imperialist, anti-colonial, and anti-Christian uprising that took place in China between 1899 and 1901, toward the end of the Qing dynasty, which shook China at the turn of the twentieth century. Angry about foreign powers, imperialist land grabs, and Christian evangelists posing threats to traditional Chinese culture, the ultraconservative Boxers persuaded the ruling Qing Dynasty to drive out the countries responsible for these influences. In the year 1900 a multitude of Boxers swarmed into Peking, as Beijing was then known by Westerners, and drove the foreigners and Chinese Christians living there into a single small area, aided by an influx of government troops. The besieged diplomats, soldiers, and citizens held off their attackers for fifty-five days, until fighters sent by an alliance of eight nations came to the rescue arriving in the nick of time like cavalries in an old-fashioned western, according to the film's version of these harrowing events.

‘55 DAYS AT PEKING’ focuses on three main characters. Charlton Heston plays Matt Lewis, the tough-as-nails American major who takes command of a 500-man defence unit inside the diplomatic compound. David Niven plays Sir Arthur Robertson, the good-natured British ambassador who votes to stay in Peking when all the other diplomats are eager to pack their things and go. Ava Gardner plays Natalie Ivanoff, a fading Russian baroness with a checked past her infidelity drove her husband to kill himself and a newfound capacity for sacrifice. The most compelling secondary characters are Dowager Empress Tzu-Hsi [Flora Robson], the reigning monarch whose support is crucial to the Boxers' campaign, and Prince Tuan [Robert Helpmann], a schemer who's more interested in power than in the dynasty's long-term wellbeing. Also on hand are Sargent Harry [John Ireland], who serves Lewis as a sort of conscience, Dr. Steinfeldt [Paul Lukas], a seasoned physician trying to keep the wounded Westerners alive, and Teresa [Lynne Sue Moon], a Chinese-American child orphaned by the conflict.

Producer Samuel Bronston had grand ambitions for ‘55 DAYS AT PEKING,’ and the film represents the epic moviemaking that characterised the golden age of Hollywood. The battle sequences are stunning in their scope, and Beijing was re-created in elaborate and enormous sets. Although these features drew much praise, they drove up production costs and contributed to the film's losing money despite its success at the box office. Other production troubles included director Nicholas Ray's walking off the set near the end of filming. Andrew Morton and Guy Green completed the movie, though they were uncredited. A first-rate cast is marred only by the use of Western actors as Asian characters. Also to note, is Dimitri Tiomkin's brilliant and stunning film score.

But the film remains in memory for its flashing movement and fireworks. The producers were sensible enough to keep the dialogue, which is often banal, to a minimum. Although it was all done in and around Madrid, the sound and fury and beauty of these momentous ‘55 DAYS AT PEKING’ are brought vividly to life, but was partly directed by Nicholas Ray who suffered a heart attack and whose work was completed by second unit director Andrew Marton and an uncredited Guy Green. The film became notorious for closing down Chinese restaurants all over Europe since all their staff were in Spain as extras for the huge action scenes.

Blu-ray Image Quality – Anchor Bay Blu-ray of ‘55 DAYS AT PEKING’ is a very good 1080p encoded image sourced from a 2013 restoration and exceedingly brilliant 2.35:1 [Super Technirama 70] aspect ratio. It comes complete with long overture, intermission and exit music. The clean image has vivid colours, even if some scenes appear to look on the weak side, and sometimes the density can perhaps to look a bit light. So all in all, the Anchor Bay Blu-ray disc of ‘55 DAYS AT PEKING’ have brought us something really special. Please Note: Playback Region B/2: This will not play on most Blu-ray players sold in North America, Central America, South America, Japan, North Korea, South Korea, Taiwan, Hong Kong and Southeast Asia. Learn more about Blu-ray region specifications.

Blu-ray Audio Quality – ‘55 DAYS AT PEKING’ blasts onto Blu-ray with a steady dynamic 5.1 DTS-HD Master Audio soundtrack. The audio experience is really superb with this Anchor Bay release, with a deep, rich sound that helps submerge viewers into the dramatic action and drama scenes. The dialogue is always very crisp and clear, and especially remaining intelligible in even the most packed action-laden portions of the film. Essentially, the audio track makes full use of all of the speakers via your Home Cinema set-up and works really well to create a rich and fulfilling audio experience, especially for your guest audience’s ears!

Special Feature: Restoration Extra: Here you get to see the difference in image quality via 3 Chapters. With this brilliant demonstration, you first get to see the 8 perforation Original Camera Negative and then you get compare the 35mm Reduction Negative. With the 8 perforation Original Camera Negative you get to see a crisp stunning sharp image, which is really enhanced on this Blu-ray disc. Whereas the 35mm Reduction Negative the image is very soft warm colours and not very sharp and of course seeing it in 1080p makes the image it look even worse. The whole demonstration is totally silent, which is a crying shame, as I would have liked to compare to see if there was any difference in the audio clarity. The Image Restoration was done by Pinewood Studios in the UK and was restored in 2013 from the 8 perforation Original Camera Negative, which is the aspect ratio 2.35:1 [Super Technirama 70].

Special Feature: Playout Music: The Peking Theme "So Little Time" and was recorded by Andy Williams. The words were composed by Paul Francis Webster. Paul Francis Webster [20th December, 1907 – 18th March, 1984] and was an American lyricist who won three Academy Awards® for Best Song and was nominated sixteen times for the award. Music was composed by Dimitri Tiomkin. The name Dimitri Tiomkin calls forth the image of one of Hollywood’s most distinguished and best-loved composers. Whether the genre was Westerns, drama, comedy, film noir, adventure, or war documentary, Dimitri Tiomkin’s visceral, dramatic underscores helped bring more than 100 feature films to vivid life. The list of respected directors who continuously called on his services is impressive: Frank Capra, Howard Hawks, and Alfred Hitchcock among them.

Bonus Information: The Title Background Paintings were produced by Dong Kingman. Dong Kingman was a Chinese American artist and one of America's leading watercolour masters. As a painter on the forefront of the California Style School of painting, he was known for his urban and landscape paintings, as well as his graphic design work in the Hollywood film industry. He has won widespread critical acclaim and his works are included in over 50 public and private collections worldwide, including Metropolitan Museum of Art, Museum of Fine Arts, Boston; Brooklyn Museum; DeYoung Museum and Art Institute, Chicago.

Finally, it is hard to deny that ‘55 DAYS AT PEKING’ is short on psychological depth and historical accuracy, and the dialogue contains the kind of insensitive racial comments that have become mercifully rare today. Still, the visuals are as arresting as ever and it's no wonder that reviewer after reviewer has praised the spectacular fireworks, especially at the climax and the film vividly represents a bygone age of international spectaculars that made up in extravagance what they sometimes lacked in coherence and common sense. Highly Recommended! 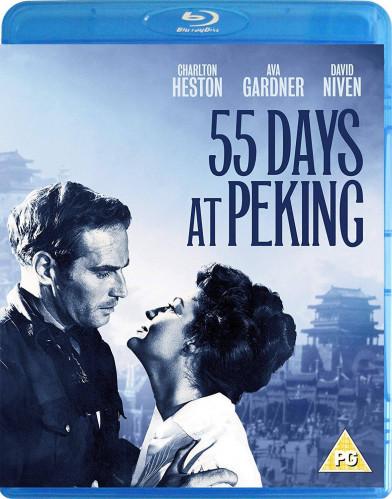 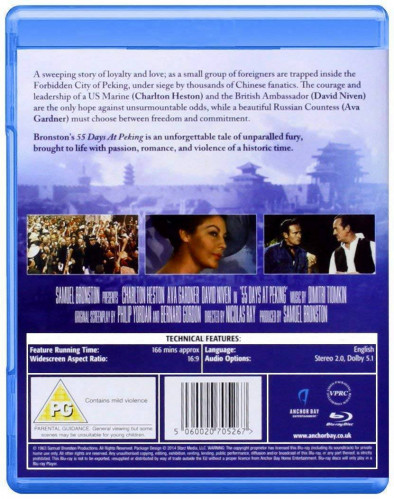