Something appealing; something appalling; something for everyone a comedy tonight! "One of the hottest burlesque shows that ever hit Broadway" [Time Magazine] comes to the screen showcasing the enormous talents of Tony Awards winner Zero Mostel, Phil Silvers, Jack Gilford, Buster Keaton and Michael Crawford.

This screen adaptation of the stage musical of the same name finds the Roman slave Pseudolus [Zero Mostel] scheming his way to freedom by playing matchmaker for his master's son, Hero, who is smitten with the blonde and beautiful Philia. However, things don't go at all according to plan. The complications that ensue involve blackmail, funny disguises and long-lost children, while Pseudolus desperately tries to keep up with his end of the bargain.

FILM FACT No.2: Veteran film comedian Buster Keaton was terminally ill with cancer at the time of filming. Nevertheless, the 70-year-old actor was able to do many of his own stunts in the film, to the amazement of the cast and crew. ‘A FUNNY THING HAPPENED ON THE WAY TO THE FORUM’ would be his final film appearance. Future “Doctor Who” star Jon Pertwee, brother of screenwriter Michael Pertwee, appears briefly as Crassus, who reports that there is no plague in Crete. Jon Pertwee had originally played the part of Lycus in the 1963 West End stage production. Roy Kinnear appeared in eight other films directed by Richard Lester. The song "Love Is in the Air" was originally intended as the opening number. The song was cut from the show and replaced with "Comedy Tonight".[19] The song was later featured in the film ‘The Birdcage’ (1996) and performed by Robin Williams and Christine Baranski. Another draft of the opening number, "Invocation and Instructions to the Audience," has been used in subsequent revues of Sondheim songs and was sung by Nathan Lane in the musical The Frogs. "Pretty Little Picture" is frequently dropped from productions of the show, and one verse of "I'm Calm" is also frequently trimmed. Other cut songs include "Love Story (Your Eyes Are Blue)" and "The Echo Song".[20] The song "Farewell" was added to the 1972 Broadway revival.

Andrew's Blu-ray Review: Madrid, Spain stands in for Italian locations in ‘A FUNNY THING HAPPENED ON THE WAY TO THE FORUM’ [1966], directed by Richard Lester ‘A Hard Day's Night’ [1964] and ‘The Three Musketeers’ [1974]. Gleefully zany wordplay peppers the action, with Stephen Sondheim's libretto rhyming "eunuchs" with "tunics," and Zero Mostel, starring as scheming slave Pseudolos, examining a bottle of wine; "was One a good year?" Crammed with stellar comedic talent of its era, the film stars Zero Mostel, Jack Gilford, Phil Silvers and Buster Keaton which was one of his last performances. Larry Gelbart [‘Tootsie’] and Bert Shevelove wrote the Broadway hit on which the film was based, adapting it from a trilogy of comedies by 3rd century BC Roman playwright Plautus.

Set in "a less fashionable suburb of Rome" and swirling with swinging sixties treatments of soothsayers, public baths, and ancient Roman go-go girls, the glory or chaos that was Rome is handled with Richard Lester's signature frenetic directorial style. The film's elaborate sets were strewn with actual fruits and vegetables, which were often left to rot in the Castillian sun at the end of the shooting day. The flies that plagued the production became a motif in the film and are a memorable feature of the animated end credits designed by Richard Williams, who was later recognised for his 1971 television special ‘A Christmas Carol.’ Richard Lester was selected by star Zero Mostel to direct the motion picture although other names originally under consideration for director included Charlie Chaplin, Orson Welles and Mike Nichols. Cinematographer Nicholas Roeg would later graduate to director and reap acclaim for such films as ‘Walkabout’ [1971], ‘Don't Look Now’ [1973] and ‘The Man Who Fell To Earth’ [1976].

Often at times, a film's title alone can set up certain expectations. For instance, if I'm sitting down to watch a comedy called ‘A FUNNY THING HAPPENED ON THE WAY TO THE FORUM,’ then I'm probably going to expect, you know, something funny to happen on the way to the forum. Thankfully, something funny does indeed happen. In fact, lots of funny things happen... along with singing and dancing! A high-energy musical farce from director Richard Lester ['A Hard Day's Night'], the film offers an amusing blend of slapstick charm and goofy satire and all at the hands of a legendary comedic ensemble dressed in brightly coloured togas!

Based on the Steven Sondheim's stage musical of the same name, the story focuses on a scheming but sluggish ancient Roman slave named Pseudolus [Zero Mostel]. When his master's son, Hero [Michael Crawford], begs for help in order to win the heart of a courtesan [Annette Andre], Pseudolus accepts the challenge in return for his freedom. But as the situation grows increasingly complex and dangerous, the clever slave soon finds himself in over his head.

Led by the great Zero Mostel, the cast is absolutely brimming with delightful personality, and the ensemble plays off of one another brilliantly. Zero Mostel is particularly hilarious as the cheating, crafty Pseudolus, playing up every new devious plan with wily glee. Likewise, Phil Silvers, Jack Gilford, and Michael Hordern are equally entertaining, and together they all bring a sharp contemporary comedic sensibility to the ancient Rome setting. Special note must also go to Buster Keaton who delivers a very memorable final screen role. Despite battling cancer at the time of shooting, the celebrated comedian still pulls off many of his own stunts, offering a few inspired bits of slapstick.

In addition to the film's physical sense of humour, much of the comedy also comes from farcical observations, light social satire, witty wordplay, and a few gags that involve silly reversals of expectation. For instance, one scene involves a character tossing a bird with a message to a nearby window... only for the bird to abruptly fall down toward the ground instead. Director Richard Lester does a fantastic job of building up all of these numerous aspects, and as the plot becomes more and more intricate, the various moving pieces collide in a rather inspired explosion of comical chaos.

To this end, Richard Lester brings his usual penchant for playful cinematic style to the screen, enhancing the runtime with some fun visual touches. Quick edits, zooms, and jump cuts are used occasionally to ramp up the energy and pace, including one particularly effective rapid-fire montage that sums up the film's many intersecting plotlines. The spectacular chariot race that marks the story's climax proves to be very exciting as well, and even features some classic fast motion antics that hark back to the silent era.

Of course, the real stylistic highlights of this comic caper film comes during the periodic music and dance numbers, and these scenes are all gloriously goofy. The choreography is especially silly, resulting in some hilarious dance moves from the cast that poke fun at the type of overly dramatic romance one usually associates with the genre. And these visual bits are all bolstered by clever and spirited lyrics. Also, it certainly doesn't hurt that the melodies are pretty damn catchy as well, making it all the more fun to hum along to the absurd sight of Zero Mostel frolicking around with Jack Gilford in drag.

The opening number ‘A FUNNY THING HAPPENED ON THE WAY TO THE FORUM’ promises a "Comedy Tonight" and the filmmakers successfully live up to that pledge, providing a healthy helping of farcical entertainment. The musical might not be a true classic, but it holds up very well and features a delightful ensemble. Lester manages the script's gradually building sense of hilarious disarray perfectly, leading to an entertaining, mad-cap climax that can only be described as "lovely, absolutely lovely."

But the most significant aspect of ‘A FUNNY THING HAPPENED ON THE WAY TO THE FORUM’ is the musical score by Stephen Sondheim which was adapted for the screen by Ken Thorne. The latter would snatch the only Oscar for the film for Best Adapted Music Score in the 1966 Academy Award® race against such competitors as Harry Sukman [‘The Singing Nun’], Elmer Bernstein [‘Return of the Seven’] and Al Ham [‘Stop the World I Want to Get Off’]. Ken Thorne [Musical Director] who had previously worked with The Beatles on their score for ‘Help!’ [1965] would go on to compose music for such films as ‘Head’ [1968], the Monkees film debut, ‘The Magic Christian’ [1969] and ‘Superman II’ [1980].

EVERYBODY SHOULD HAVE A MAID (Written by Stephen Sondheim) [Performed by Zero Mostel, Michael Hordern, Jack Gilford and Phil Silvers]

BRING ME MY BRIDE (Written by Stephen Sondheim) [Performed by Leon Greene, Zero Mostel and the ensemble]

Blu-ray Image Quality – Using what appears to be an older transfer that was provided by M-G-M, but now via 101 Films ‘A FUNNY THING HAPPENED ON THE WAY TO THE FORUM’ it has greatly been improved much more over the M-G-M's earlier inferior DVD release, but only just slightly. The film is provided with a 1080p transfer in the 1.85:1 aspect ratio. Though a little uneven at times, this is a seemingly authentic and most pleasing image throughout the film. A moderate to heavy layer of grain is also apparent throughout, giving the picture some natural filmic texture. With that said, some shots do look a tad rougher than others, especially the climax and the transfer does have a predominately flat quality. Overall clarity is good, highlighting every line of devious personality in Zero Mostel's expressive face. While a little faded, the colour palette is also pleasing, offering decent pop in some of the costumes and sets with punchy reds, oranges, purples and yellows. Contrast is well balanced, but blacks are just a hair elevated. Digital artefacts are mostly absent, but some faint halos are present in a few shots. Despite some minor inconsistencies, this is a very respectful and relatively sharp transfer that I really enjoyed over the inferior Kino Lorber Region A/1 Blu-ray release awhile back. The only slightly disappointing aspect of this film is that I wish they could release it in the right aspect ratio, which you see with the end credits and hopefully sometime in the near future, someone like The Criterion Collection will bring out a Special Edition Blu-ray in the right aspect ratio?

Blu-ray Audio Quality – The film is presented with a 2.0 DTS-HD Master Audio Stereo track along with English subtitles. Free from any age-related hiccups, this is a surprisingly engaging mix that does a good job of bringing the film's musical numbers to life. Dialogue is clean and clear throughout, though speech is a little on the flat side. Vocals, on the other hand, feature a nice, full quality. The musical numbers all come through with pleasing fidelity and separation, offering strong range. Likewise, there is some decent directionality with voices and effects in the two channel presentation as well. With that said, the transition to the songs can be a little jarring, as the sound quality jumps up a bit during the musical scenes. Thankfully, there are no pops, crackles, or hisses to report. Considering its age, the mix is quite effective and the songs sound great, giving every playful lyric with ample amounts of presence.

Blu-ray Special Features and Extras: Sadly 101 Films has not even been able to include a Theatrical Trailer.

Finally, ‘A FUNNY THING HAPPENED ON THE WAY TO THE FORUM’ is a playful and entertaining musical comedy from director Richard Lester. The cast is totally brilliant and at the same time fantastic, pulling off a funny mix of slapstick farce and silly wordplay. On the technical front, the video transfer is very solid and the audio mix is strong. While not exactly a comedy classic, this is a very hilarious enjoyable film that has aged surprisingly well and well worth a look. Highly Recommended! 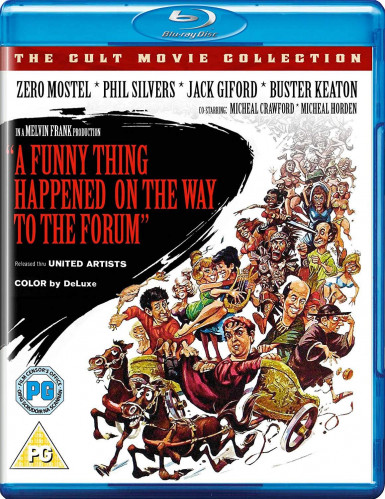 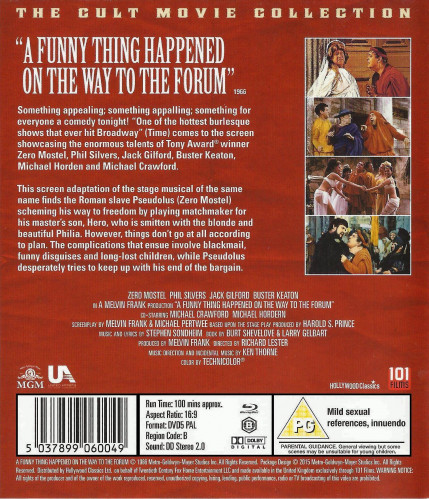