Capra-esque in every way, ‘A HOLE IN THE HEAD’ comes to Blu-ray in all its rollicking, fun-filled, song-filled glory. With his master touch, legendary director Frank Capra (‘It’s A Wonderful Life’ and ‘Pocket Full Of Miracles’) once again catches lightning in bottle when he teams with Frank Sinatra (‘On The Town,’ ‘The Manchurian Candidate and ‘Pal Joey’), Edward G. Robinson (‘Little Caesar,’ ‘Key Largo’ and ‘The Ten Commandments’), and Eleanor Parker (‘The Sound of Music,’ ‘Pride of the Marines and ‘Of Human Bondage’) in the sentimental comedy ‘A HOLE IN THE HEAD.’

In the tradition of ‘It’s A Wonderful Life,’ ‘Mr. Deeds Goes To Washington’ and ‘Pocket Full of Miracles,’ director Frank Capra weaves a comic tale filled with heart, laughs and love … and introduced the classic standard “High Hopes” to the world.

Featured in supporting roles are Thelma Ritter (‘All About Eve,’ ‘Miracle on 34th Street’ and ‘Rear Window’), Keenan Wynn (‘Annie Get Your Gun,’ ‘The Great Race’ and ‘Nashville’and Carolyn Jones (‘The Seven Year Itch’ and TV’s The Addams Family).

FILM FACT No.2: The screenplay was adapted by playwright Arnold Schulman, whose father was the operator of a Miami Florida hotel. Aided by William Daniels, Capra completed the film a full 80 days ahead of schedule, its final production cost of $1.89 million well under the allotted budget. The film opened on the 17th June, 1959. Although having some positive reviews, the film was a modest box-office success, grossing $4 million in America.

Andrew's Blu-ray Review: In the 1950s, Frank Sinatra had bounced back from personal and professional setbacks won an Academy Award® Oscar and released some of the best music of his career. By the end of the decade, he was bigger and busier than ever, turning out two films a year and hit record after hit record. With ‘A HOLE IN THE HEAD’  and Frank Sinatra would close the decade on a high note. The film was a box-office success, and its theme song, “High Hopes” and won an Academy Award® Oscar and was one of the most popular songs of that year.

The film was directed by Frank Capra, and was advertised as a warm family comedy, audiences may have expected a light-hearted romp. The comedy is there, and the warmth, but there is a darker, desperate undercurrent in the film, which suits Frank Sinatra's edgy personality, especially when he plays Tony Manetta, a small-time promoter running a shabby hotel in Miami's South Beach neighbourhood, a run-down area at the time. The widowed Tony Manetta is raising a young son Alvin "Ally" Manetta [Eddie Hodges] and dreaming of creating a Disneyland-type resort. But he's about to lose his hotel because of his irresponsible ways, and his stodgy businessman brother [Edward G. Robinson] is after him to give up his freewheeling life and settle down with a respectable widow Eloise Rogers [Eleanor Parker].

The superb cast featured veterans Thelma Ritter as Robinson's warm-hearted wife, and Keenan Wynn as Sinatra's old friend, now a successful businessman. Carolyn Jones, who had been nominated for an Oscar® for playing a kooky girl in ‘The Bachelor Party' [1957], played a comic variation of that role, Frank Sinatra's free-spirited girlfriend. Making his film debut in ‘A HOLE IN THE HEAD' was 12-year old Eddie Hodges, who played Frank Sinatra's son. Eddie Hodges had appeared in the Broadway show “The Music Man” [1957], and had also been a contestant on a quiz show, ‘Name that Tune' (His partner on the quiz show was future astronaut and future Senator John Glenn.) Eddie Hodges later appeared in several other films, most notably ‘The Adventures of ‘Huckleberry Finn' [1960], and had several hit records in the early 1960s.

The setting presented in this one is particularly suitable to Mr. Frank Capra's bent for social observation. It is Miami Beach. And the principal character in it is a most appropriate and attractive type for his kind of frank examination. He is a dreamer, a promoter, a rolling stone. He is also the widowed father of a loving 11-year-old son and the brother of a baleful Bronx Babbitt who candidly considers him a bum. And it is in his elaborate manoeuvrings to scrape together enough money to hold on to a hotel he runs in Miami, to retain possession of his son and perhaps this, of course, is his big deal to build a $5,000,000 amusement park that Mr. Schulman, Mr. Frank Capra and Mr. Frank Sinatra reveal him magnificently.

Director Frank Capra might well have done a simple takeout on a lovable fumbler and a cornball sentimentalist. But that isn't his disposition, and it certainly would not be in the line of Arnold Schulman's aggressively incisive and brilliantly dialogued script. But, for the rest, the tone is harmonious with middle-class perplexities and the battles that go with trying to settle a difficult family affair. For the crux of the trouble and the humour is in the struggle of the brother and his wife to force the rolling-stone, to be a conformist and to give them possession of his son. But the prize goes to Frank Sinatra, who makes the hero of this vibrant colour film as a soft-hearted, hardboiled, white-souled black sheep whom we will cherish, along with Mr. Deeds and Mr. Smith, as one of the great guys that Frank Capra has escorted to the American screen.

Some of the Miami scenes were filmed on location, and part of the fun of watching ’A HOLE IN THE HEAD’ is seeing a Miami Beach very different from today's high-glitzy version. The Fontainebleau Hotel, then the epitome of Miami glamour and luxury, was the setting for a few of the scenes. The Cardozo Hotel, now refurbished and owned by singer Gloria Estefan, was the location for the Garden of Eden, Tony Manetta's shabby hotel.

Frank Capra went on to make one more film, ‘Pocketful of Miracles' [1961], a big budget colour remake of his hit ‘Lady for a Day' [1933] In spite of wonderful performances by Bette Davis and an Oscar® nominated Peter Falk, it was not a success. Frank Capra spent years trying to get financing for various projects, but sadly he never directed another film.

ALL MY TOMORROWS (1959) (Written by Sammy Cahn and Jimmy Van Heusen) [Sung by Frank Sinatra (uncredited) behind credits, instrumental version played on radio in Tony's suite and heard in the score]

Blu-ray Image Quality – When it comes to Blu-ray titles, you simply cannot be choosers. This is a rough looking film unfortunately and has far too many negative scratches and other imperfections master problems, especially with an even big hair in the film gate in one scene. It's quite obvious that Olive Films has done the best possible work they could with the print they had, but this is far from a clean restoration, as you get now and again loads of speckles appearing. While the colour image is splendid, that is nice and even, and especially natural-looking flesh tones and fairly solid blacks, and again, sadly the condition of the print leaves much to be desired. This print was clearly put together from several different elements. It's not the worst HD master I've ever seen, but it's far from the best. Even for this title where demand is limited, it leaves something to be desired when you have such amazing Miami scenery to take in. Sadly, I suspect there will never be a reissue upgrade.

Blu-ray Audio Quality – Featuring a 2.0 DTS-HD Master Audio  track, ‘A HOLE IN THE HEAD' comes through with fine clarity, especially for a film of this vintage, there aren't any audio anomalies, especially with any hisses and pops disrupting the audio track. Voices are given plenty of good vocal audio range. The minimalist Nelson Riddle composed music score never has to compete with the dialogue and the street sounds feel very clean and very natural.

Blu-ray Special Features and Extras: Sadly there are no extras included, which is a crying shame, because surely there must have been some publicity images available in the United Artist vaults or maybe a behind-the-scene filming, and interviews with the cast and crew, very strange.

Finally, ‘A HOLE IN THE HEAD' is one of those films that given the talents involved, especially from the likes of director Frank Capra and actors like Frank Sinatra, Edward G. Robinson, Thelma Ritter, Carolyn Jones and Eleanor Parker,  should of gone that extra mile, especially with those names it should have been a great film, even a classic, but sadly it is just a very family warm hearted film. Sadly sporting a rough transfer, but with a solid 2.0 DTS Master Audio track, and this Olive Films Blu-ray release is definitely one for fans of this film, especially like me, and especially die-hard fans of the brilliant director Frank Capra, which I am so glad it has now gone into my Blu-ray Collection. Highly Recommended! 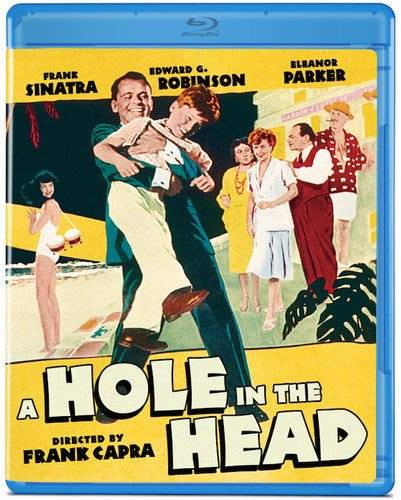 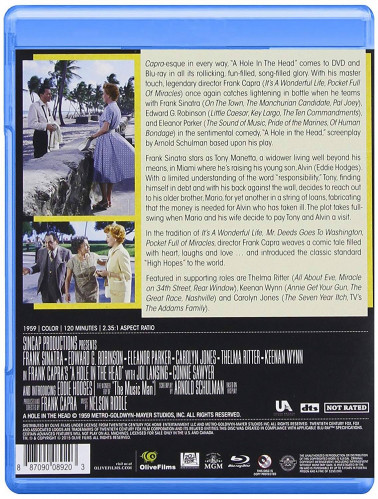