Its night over Europe, the night of the 2nd May, 1945, a crippled Lancaster Bomber struggles home across the English Channel. All the crew are dead, save for the young pilot desperately scanning the radio waves for signs of life. His prayers are answered. June [Kim Hunter], a young radio operator, picks up his signal, and in the final moments of the young flyer’s life, a special bond is formed. The next morning, washed up on an English beach, Squadron Leader RAF pilot Peter Carter [David Niven] is still alive! He finds June, and the two fall instantly in love. Somehow he has survived. It’s a miracle . . . or is it? Peter Carter should have died that night, but a heavenly escort missed him in the fog over the English Channel, and now he must face the celestial court of appeal for his right to live or die. Painted by production designer Alfred Junge and cinematographer Jack Cardiff as a rich Technicolor Eden while climbing a wide staircase to stand trial in a starkly beautiful, black-and-white modernist afterlife. Michael Powell and Emeric Pressburger are at their most imaginative and controversial with this film. Narrated by John Longden.

FILM FACT No.2: The film was originally released in the United States under the title ‘Stairway to Heaven,’ which derived from the film's most prominent special effect: a broad escalator linking Earth to the afterlife. The decision to film the scenes of the Other World in black and white added to the complications. They were filmed in Three-strip Technicolor, but the colour was not fully developed, giving a pearly hue to the black and white shots, a process cited in the screen credits as "Colour and Dye-Monochrome Processed in Technicolor." This reversed the effect in ‘The Wizard of Oz.' Photographic dissolves between "Technicolor Dye-Monochrome" and Three-Strip Technicolor are used several times during the film.

Andrew’s Blu-ray Review: Michael Powell and Emeric Pressburger’s films defined British cinema in the 1940s and 1950s, which were both artistically and commercially successful. In 1946 and at the height of their powers, Michael Powell and Emeric Pressburger wrote and directed ‘A MATTER OF LIFE AND DEATH’ is one of the finest British films ever made.

‘A MATTER OF LIFE AND DEATH’ is the utterly unique, enduringly rich and strange romantic fantasia from Michael Powell and Emeric Pressburger. It was released in 1946, the same year that Winston Churchill coined the term “special relationship” and an idea that the film finds itself debating. 2018 was a brilliant stroke of genius for this classic to be released in UK on this awesome Blu-ray disc.

‘A MATTER OF LIFE AND DEATH’ from the legendary writing and directing team of Michael Powell and Emeric Pressburger, is one of the most beloved British films ever made. And it’s easy to see why: It’s a deliciously preposterous romance between two gorgeous people whom you cannot help but root for as their love is threatened. It’s a profoundly humanist fantasy about our place in the universe and the importance of living a full life. And it’s a dazzling visual Technicolor spectacle that is deeply viscerally satisfying even as it deals with big ideas and big emotions with this amazing and iconic British film.

For those who are not familiar with the Michael Powell and Emeric Pressburger film ‘A MATTER OF LIFE AND DEATH,’ you get to experience beautifully vivid colour segments are the ones that take place in the real world, where, in England at the tail end of World War II, RAF pilot Peter Carter [David Niven] and American radio operator June [Kim Hunter] quickly fall in love, so quickly that they somehow magically sweep you up in the headiness of it and sure, romances can get forged fast in wartime, and sure, their previous “meeting” over the radio the night before was pretty intense because he was about to bail out of his damaged plane over the English Channel without a parachute, and they both obviously presumed he was about to die. Also, David Niven was a decade too old, and looked it, especially to be playing a 27-years-young wannabe poet, but never mind, because if you might die tomorrow, why not fall in love instantly?

The theatrical stylisation of Michael Powell and Emeric Pressburger sometimes deflected their thematic purpose, but in this dazzling fantasy they succeed in marrying the two elements to perfection. David Niven stars as an RAF pilot who has a conversation with American servicewoman Kim Hunter as his plane is going down. After his miraculous survival, the two meet and fall in love but he is then told he was meant to die and must defend himself in heaven. Although the film was intended to celebrate the Anglo-American alliance that had prevailed in the Second World War, the Archers production company instead delivered a barbed allegory that called into question not only the strength of the ties between the Allies, but also Britain's continued status as a world power. Few in officialdom rejoiced when it was selected for the first Royal Command Performance, but its political outspokenness, visual audacity and mannered playing now make it one of the most fondly recalled of all British film.

‘A MATTER OF LIFE AND DEATH’ numerous special effects, too, are a total marvel, from the stunning shot of angelic observers peering at earth, to the dissolves from our world to theirs. And when Peter Carter awakens, miraculously unharmed on the beaches of Blighty, his expectation that he is in heaven transforms the sand flats into a surreal, otherworldly landscape.

As rich as the visuals are, however, it is the film’s emotive power that has endured with audiences. Peter Carter survives his crash only because of a heavenly clerical error and a conceit that continues to influence contemporary depictions of the afterlife. It simply doesn’t get more compelling than Peter Carter’s fight to remain alive, arguing that after falling in love with June he deserves more time on earth. That Heaven would make a clerical error or even have need of clerks, represents the ineffably dry English humour of the era, but ‘A MATTER OF LIFE AND DEATH’ film is true power is that it taps into the delicious love of life, made all the sweeter by its transience. And the film’s sense of fairness and reason, embodied by Peter Carter’s unflappably speaking truth to Almighty power, is a moral that we would do well to remember today. ‘A MATTER OF LIFE AND DEATH’ becomes an even more profound message.

Although the film was intended to celebrate the Anglo-American alliance that had prevailed in the Second World War, the Archers production company instead delivered a barbed allegory that called into question not only the strength of the ties between the Allies, but also Britain's continued status as a world power. Few in officialdom rejoiced when it was selected for the first Royal Command Performance, but its political outspokenness, visual audacity and mannered playing now make it one of the most fondly recalled of all the iconic British films. ‘A MATTER OF LIFE AND DEATH’ film is a true power is that it taps into the delicious love of life, made all the sweeter by its transience.

Films of Michael Powell and Emeric Pressburger, are among the most mischievous and inventive of all cinema poets, is to accept that there’s more to life than you’d previously imagined: more colour, more humour, more ardour, and more blissful confusion and in those terms ‘A MATTER OF LIFE AND DEATH’ is the quintessential Michael Powell and Emeric Pressburger film. It’s a fantasy love story, imaginative to the point of being hallucinatory, one of the most out-there pictures of the last century. ‘A MATTER OF LIFE AND DEATH’ was Michael Powell and Emeric Pressburger’s first use of colour stock since 1943's and they were determined to use it creatively. They came up with the idea of mixing colour and black-and-white to differentiate the two worlds. But the Michael Powell and Emeric Pressburger’s ploy was to reverse  the logic of that film, in which the fantasy sequences appeared in colour, while prosaic reality is rendered in shades of grey, so making the earthbound scenes in Technicolor, with the “heavenly” sequences in black-and-white or, more properly, monochrome. In this way the film contrasts the energy and vitality of life and love with the slightly musty sterility of the “next world” as the gloriously camp Conductor 71 [Marius Goring] puts it on his first arrival on Earth, "One is starved for Technicolor up there."

A MATTER OF LIFE AND DEATH MUSIC TRACK LIST

SCHERZO (1842) (uncredited) (from "A Midsummer Night's Dream, Op.61") (Written by Felix Mendelssohn-Bartholdy) [Played on a record at the Shakespeare rehearsal]

Blu-ray Image Quality – ITV Studios Home Entertainment brings us a stunning 1080p Technicolor image presentation and is enhanced with a 1.37:1 aspect ratio. The amazing sensory lushness of the film is on grand display in the brand-new 4K restoration now on British screens. The glorious Technicolor is so rich and so amazing that the British film looks more real than reality. The black-and-white segments are a triumph of beautiful clarity and are sometimes quite striking, given the use of colour and black-and- white when thinking of the different methods to capture both aspects of this decade’s old film approaches this aspect of the transfer with no issue. The detail level seen of the actual characters in the film is very impressive. The actors all look great with this image presentation, whether in colour or black-and-white. So all in all, this is a fantastic brilliant 4K restoration by Sony Pictures Entertainment. Please Note: Playback Region B/2: This will not play on most Blu-ray players sold in North America, Central America, South America, Japan, North Korea, South Korea, Taiwan, Hong Kong and Southeast Asia. Learn more about Blu-ray region specifications.

Blu-ray Audio Quality – ITV Studios Home Entertainment presents us with a wonderful 2.0 LPCM Stereo Audio experience that really enhances the sound quality of this 1946 classic British film, especially the opening plane sequence dramatic force, while Allan Gray’s film music score boosts the romantic mood of the film. On top of all that, this is a clean and clear track with no real audible issues to speak of and there is no audio distortion, that has an appropriate level, and the work done has everything kept stable and is quite impressive, so throughout the film everything is clean and clear.

Special Feature: BIOGRAPHIES: Here you get view five individual in-depth worded biographies of the following: Michael Powell; Emeric Pressburger; David Niven; Raymond Massey and Kim Hunter. While reading the in-depth Biographies, you get to hear in the background the brilliant composed music of Allan Gray for the film ‘A MATTER OF LIFE AND DEATH.’

Finally, ‘A MATTER OF LIFE AND DEATH’ is a visually extraordinary film: a gorgeous artificiality that was created by Alfred Junge’s production design and Jack Cardiff’s vivid Technicolor cinematography. Counterintuitively, the heavenly scenes are in black-and-white and Earth is in colour. ‘A MATTER OF LIFE AND DEATH’ is a dazzling visual spectacle that is deeply visually satisfying, even as it deals with big ideas and big emotions. One of the most beloved classic British films ever is now even lusher, more gorgeous, more humanist in a glorious new restored edition. Michael Powell and Emeric Pressburger’s films defined British cinema in the 1940s and 1950s, which were both artistically and commercially successful. In 1946 and at the height of their powers, Powell and Pressburger wrote and directed ‘A MATTER OF LIFE AND DEATH,’ and is definitely one of the finest classic British films ever made. Very Highly Recommended! 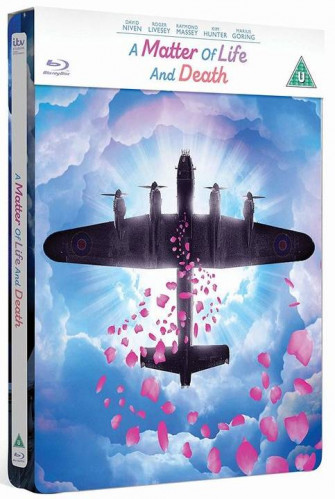 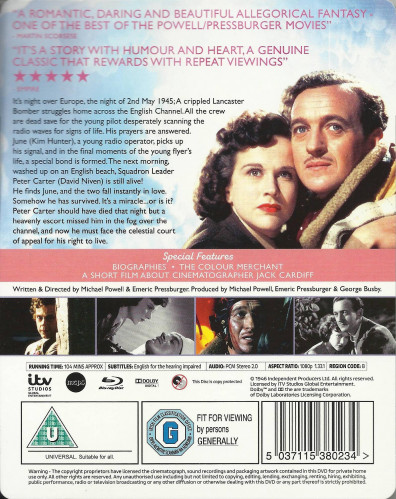