An ambitious couple and a V.I.P. [Very Important Pig] collide in his outrageous comedy of manners! During a time of extreme food rationing in England following World War II, one town’s upper class bends the rules by illegally fattening a prize pig for a feast to celebrate the upcoming royal wedding. When a timid foot doctor Michael Palin and his bossy wife, the 2 time Academy Award® winner Dame Maggie Smith get wind of the plan, they seize the chance to climb the social ladder by kidnapping the pig...that has a few unpleasant surprises of its own in store. One of the most hilarious and critically-acclaimed British cult comedy film of all time, this star-packed satire proves some people will truly do anything to get ahead!

FILM FACT No.2: A musical based on the film opened in the West End in April 2011, under the new title ‘Betty Blue Eyes.’ It was produced by Cameron Mackintosh and ran for several months at the Novello Theatre, London and it starred Reece Shearsmith [‘The League of Gentlemen’] as Gilbert, and actress Sarah Lancashire as Joyce. The film was predominantly filmed in Ilkley, Ben Rhydding, and Barnoldswick West Yorkshire in England.

Andrew’s Blu-ray Review: ‘A PRIVATE FUNCTION’ [1984] is a typically British 1980s absurdly comedy turning a spotlight on class distinctions and social climbing in the UK. Set right after World War II, when there is still strict food rationing, a group of the upper class gentility plan a private feast in honour of HRH Queen Elizabeth II upcoming marriage, all in order to impress the local government. The feast is supposed to consist of pork from an illegally raised pig they have all been contributing their scraps to raise the pig up for fattening for the up and coming Private Function, but when a local podiatrist [Michael Palin] and his wife [Dame Maggie Smith) decide they want in and want a chance to rise up the social ladder, they steal the pig and get way more than they’d bargained for.

‘A PRIVATE FUNCTION’ is a cheerfully rip roaring caustic comedy skewering British class resentments and social climbing in a small Yorkshire town brimming with conspiracy in 1947. Rationing is still taking a toll on domestic kitchens, but the burg's leading professionals, led by misanthropic Dr. Swaby [Denholm Elliott] are planning an elite banquet to commemorate the impending wedding of Princess Elizabeth. A few rungs down society's ladder, chiropodist Gilbert Chilvers [Michael Palin] bicycles dutifully to his patients' homes, their flying toenail clippings going ping off the ceramics on the mantelpiece, but despite a new office on the main high street, his small-potatoes status in the local pecking order irks his zealously ambitious wife Joyce Chilvers, a deliciously highly-strung Dame Maggie Smith, who squashes his mealtime shoptalk (Don't bring feet to the table, please) and leaps at Gilbert Chilvers's desperate suggestion that they, after being continually turned away at an overrun, understocked butcher shop, steal a pig to upgrade their larder and their profile. It's not just pork, its power! Salivates Joyce Chilvers.

Unknown to the Chilverses family, their porky quarry is the unlicensed entrecote for the royal wedding fete, and the sly lampoons of the film's first half kick into robust slapstick gear as the couple wrestles the oinking beast into their home, lacking the will or expertise to slay it, and the town leaders panic over losing their ill-gotten meat or having their black-market crime discovered. At the offer of a mere two turkeys to replace the kidnapped swine, one bourgeois rage. We have 150 people coming, and Jesus isn't one of them!

The original screenplay by Alan Bennett, a droll jewel of TV and stage since the 1960s and in recent decades a playwright of West End/Broadway hits, is pitch perfect in leavening the generally base townsfolk and bleak milieu with jokes that deepen character; the municipal meat inspector [Bill Paterson], whose raids are met with cries of Gestapo and lacks the senses of taste and smell, and as Liz Smith witnesses the contraband pig defecating all over her kitchen floor, she cringes, and shouts to Dame Maggie Smith, I was quite right not to want children if this is what it's like.

Veteran BBC director Malcolm Mowbray, who conceived the story with Alan Bennett, staged the action with just the right undertow of nastiness, and drew consistently neat performances from the ensemble, including Liz Smith as Joyce Chilverses's perpetually dotty live-in mother, and Pete Postlethwaite as a Machiavellian butcher who ruthlessly has his competitors shut down, and Richard Griffiths as a candy-munching accountant who, like Palin's Gilbert, gets sweet on the pig. ‘A Private Function’ amply demonstrated by a Dame Maggie Smith crawling after the porker, butcher knife in hand, or earnestly wailing for upper-class respect (&#34;My father owned a chain of dry cleaners!&#34;), punctures respectability with lowdown buffoonery and high style.

Blu-ray Image Quality – There have been better transfers of catalogue titles released onto Blu-ray, even of films older than A Private Function‘s 1984 vintage, but the 1080p encoding still looks acceptably film-like. Despite the appearance of slight source damage throughout and soft details, the transfer is pleasing enough and absent major amounts of compression artefacts and video noise. Despite this, the colours are bright and sharp, the blacks are rich, and there are no artefacts to be seen.

Blu-ray Audio Quality – The audio is a very basic 2.0 LPCM Stereo Audio mix. There is not much to say about it other than it provides clear enough dialogue, although it sometimes sounds a bit too compressed. The balance of sound effects and dialogue has a decent amount of ambience and especially the midrange audio experience.

Blu-ray Special Features and Extras: None, except for the theatrical trailers for ‘A PRIVATE FUNCTION’ and close to a dozen other film features by HandMade Films, the company co- founded by ex-Beatle George Harrison, including ‘Time Bandits,’ ‘Mona Lisa’ and ‘Withnail & I.’

Finally, ‘A PRIVATE FUNCTION’ is the kind of film that pays homage to the very funny Ealing comedies of the 1950s and yet another example of the disparities among the myriad types of funny characters of the period. If you're a right fan of this particular brand of British wit, dive in. If your tastes run more toward the raucous, though, politely decline the invite to this Private Function and it is one of the wittiest films of the 1980s, and on top of all that it is in my mind a true Alan Bennett classic comedy caper, that we the British can only pull off and has always been a big favourite of mine, but I find it very strange that this was never released in the United Kingdom, despite this anomaly, I am glad it has been released on the Blu-ray format and has been added to a pride of place in my Blu-ray Collection. Highly Recommended! 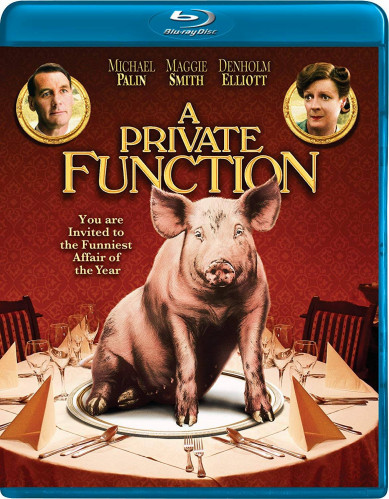 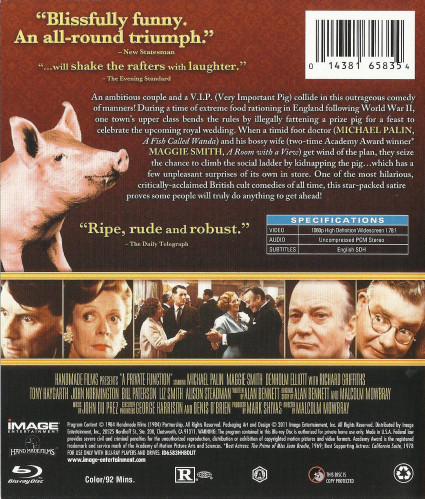