Woody Allen’s romantic comedy ‘A RAINY DAY IN NEW YORK’ tells the story of college sweethearts, Gatsby Welles [Timothée Chalamet] and Ashleigh Enright [Elle Fanning],  whose plans for a romantic weekend together in New York City are dashed as quickly as the sunlight turns into showers. The two are soon parted, and through a series of chance meetings and comical adventures, they will discover that while you only live once, once is enough if you find the right person.

FILM FACT: Principal photography began on September 11, 2017 in New York City and concluded on the October 23rd 2017. In August 2017, Timothée Chalamet, Selena Gomez, and Elle Fanning joined the cast of Woody Allen's newest film, with Allen directing from a screenplay he wrote. Letty Aronson produced, while Amazon Studios was to distribute it. In October 2017, Allen confirmed the film was titled ‘A RAINY DAY IN NEW YORK.’ In September 2017, Jude Law, Diego Luna, Liev Schreiber, Annaleigh Ashford, Rebecca Hall, Cherry Jones, Will Rogers, and Kelly Rohrbach joined the cast of the film. In October 2017, Suki Waterhouse also joined the cast.

Andrew’s Blu-ray Review: With the film ‘A RAINY DAY IN NEW YORK’ [2019] is exactly where Woody Allen finds himself in this whimsical tale of young love. The jazzy old tunes, the autumnal colours, the long takes of unbroken dialogue, and a rogue’s gallery of artists, misfits and the elite of the Upper East Side. Woody Allen is squarely back on home turf, with a vision of Manhattan so nostalgic it has been idolised, no, make that romanticised out of all proportion.

Timothée Chalamet is Gatsby Welles, the ne’er-do-well son of a wealthy New York family, currently studying at an upstate liberal arts college. Gatsby Welles’s not really interested in his education, and prefers to spend most of his time gambling in high-stakes poker games. The only reason he hasn’t dropped out of college is because of his girlfriend Ashleigh Enright [Elle Fanning] and gets the opportunity to interview the acclaimed filmmaker Roland Pollard [Liev  Schreiber] in New York for the college paper, Gatsby Welles tags along and plans a romantic few days for them both in the city that never sleeps.

Unfortunately for Gatsby Welles, with Ashleigh Enright’s encounter with the eccentric, alcoholic filmmaker sends their plans awry. As the rain pours down, the plot splits in two as Ashleigh finds herself caught up in a series of misadventures with older men, including beleaguered writer Ted Davidoff [Jude Law] and movie heart-throb Francisco Vega [Diego Luna], whilst Gatsby Welles, disgruntled that his romantic plans have been thwarted, reconnects with Chan Tyrell [Selena Gomez], the younger sister of his ex-girlfriend.

Gatsby Welles describes New York as a hostile city full of paranoia and anxiety, claiming “you’re here or nowhere,” clearly believing it’s the centre of the universe… and it just might be the centre of his. Gatsby Welles grew up in a refined and well-educated family, but he was seemingly sheltered from every aspect of life that emerged since the 1950s! Everything he says sounds like a carefully crafted sentence from an F. Scott Fitzgerald or J.D. Salinger novel. I don’t care how classy, nobody speaks this way today.

For someone like Gatsby Welles who doesn’t have an  identified passion or career path, Gatsby Welles has a lot to  say about the old pals he encounters making student films and his mom’s vast network of successful acquaintances and friends, for whom she’s throwing a gala he’s trying to avoid. Gatsby Welles also expresses a sense of paranoia toward Ashleigh Enright. When Ashleigh Enright postpones lunch with him, Gatsby Welles believes something bad must have happened to her.

To some critics they felt that ‘A RAINY DAY IN NEW YORK’ lacked a structured plot, but the journey of these two characters through the city is totally captivating and so beautiful. Ashleigh Enright gets to wander around Kaufman Studios. Gatsby Welles ventures over to his ex-girlfriend’s apartment with her younger sister, Shannon. If there’s a highlight to this film, it’s the moment Gatsby Wells shares with his mother Mrs. Welles [Cherry Jones] in a moving monologue that gave me goose bumps. Cherry Jones may not have a lot of screen time here, but she’s so memorable and his mother scolds Gatsby Wells for bringing a prostitute to her party, who is pretending to be Ashleigh Enright. Cherry Jones describes it as an act of hostility toward her, reminiscent of the way Gatsby Welles describes New York at the beginning of the film.

The characters are lots of fun and very engaging, and the cast are also very charming, delivering Woody Allen’s dialogue and snappy one-liners come at you with real zest. But the success rate of the dialogue is somewhere in the 50/50 range, as for some of the lines, as you might expect when written by an 80-year old and spoken by a 20-year old and land with an almighty thud. The game cast, which also includes Rebecca Hall as Connie Davidoff and Cherry Jones as Mrs. Welles, have just enough breezy charm and charisma.

The film looks totally beautiful however, with cinematographer Vittorio Storaro and Wood Allen’s long-time production designer Santo Loquasto giving the film a golden, dream-like aesthetic look that perfectly fits with Gatsby Welles’s and Woody Allen’s fantastical nostalgia for this city. It won’t change your life in any way, but ‘A RAINY DAY IN NEW YORK’ is totally a perfect way to spend 92 minutes.

Thematically, ‘A RAINY DAY IN NEW YORK’ covers much of the same ground that Woody Allen has explored in the past, but that is hardly a criticism. Most of the Woody Allen output from the late-1970s onwards has been variations on the same themes and subjects. The question that always hangs over his late-period films is whether they fall into the “classic Woody Allen” category like ‘Midnight in Paris,’ ‘Blue Jasmine,’ ‘Vicky Cristina Barcelona’ or the “creatively bereft” ‘Scoop’ or ‘Cassandra’s Dream,’ and ‘A RAINY DAY IN NEW YORK’ is somewhere in the middle, but still a very enjoyable and engaging film of total joy.

POST SCRIPT: ‘A RAINY DAY IN NEW YORK’ is unquestionably beautiful. The number of long single takes, especially between Gatsby Wells and the friends he visits, offer a great opportunity to capitalize on the architecture of New York’s luxurious homes. The camera work is impressive and the set design is wonderful. The film makes you want have your very own adventures in New York on this scale like Gatsby Wells experienced, while it also reminds you that you’ll probably never be so lucky… which would be a crying shame.

THE BEST THINGS IN LIFE ARE FREE (Composed by Lew Brown, B.G. DeSylva and Ray Henderson) [Performed by Erroll Garner]

WILL YOU STILL BE MINE? (Composed by Tom Adair and Matt Dennis) [Performed by Erroll Garner]

SING A SONG OF SIXPENCE (Traditional [Performed by Michael Scales]

Blu-ray Image Quality – Signature Entertainment presents us the film ‘A RAINY DAY IN NEW YORK’ and a wonderful and very evocative and stunning impressive and glorious 1080p Technicolor image, especially showing off the best of New York City and once again is presented in the very unusual framed film in the 2.00:1 aspect ratio, that really brings out the very best with a city that never sleeps in a really spectacular way. While most of the time director Woody Allen has preferred a classical style for the look of his films, and has slowly evolved as evidenced by the look of this very stylish film of his. And for the first time Woody Allen has shot this film in the digital format and looks absolutely fantastic and is the word for this transfer as the sharpness is totally exceptional with so much sharp clarity and colours are totally luscious and especially often totally breath-taking. Skin tones take on a beautiful burnished aura in some of the lower lit Hollywood scenes, but overall the flesh tones are totally believable and very appealing, and colour values overall are rather scrumptious. Black levels are really excellent, and the contrast has been applied with great panache in making for a most consistent picture quality image and the bright vibrant colours of parts of New York City come through wonderfully stunning, with a sharp vibrant use of colour, flare, and pizzazz. This is cinematically at its best in showing off a wonderful spectacular ambience of New York City that really creates the mood of the city that again never sleeps. Visually, ‘‘A RAINY DAY IN NEW YORK’ was everything you could ask for in another stunning Woody Allen film, and again especially the work of the total genius that is Vittorio Storaro, A.S.C., A.I.C. the Director of Photography. So all in all, the spectacular and sharp vibrant use of colour gets a top rated five star rating from me. Please Note: Playback Region B/2: This will not play on most Blu-ray players sold in North America, Central America, South America, Japan, North Korea, South Korea, Taiwan, Hong Kong and Southeast Asia. Learn more about Blu-ray region specifications.

Blu-ray Audio Quality – Signature Entertainment brings us the film ‘A RAINY DAY IN NEW YORK’ with two alternative sound experiences and they are 5.1 DTS-HD Master Audio and 2.0 Dolby Digital Stereo Audio. The 5.1 mix only uses the rear channels for slight ambiance effects. This is a very dialogue oriented style of this film, with the emphasis of the ambient noises of city life and especially the party scenes that rely much more heavily on the crowd scenes that has been masterfully recorded and has been placed in the centre channel, giving the audio a high quality ambient sound that gets a great use of voice, music, and narration, especially from Woody Allen himself no less. The amazing music selection is amazingly spot on, with a good jazzy feel to it overall and very evocative of modern day New York City. So all in all, the audio experience gets again a massive five star rating and really shows off the Woody Allen film at its best audio experience.

Blu-ray Special Features and Extras: This Blu-ray disc of ‘A RAINY DAY IN NEW YORK’ is typical with Woody Allen’s films and has no extras of any kind because Woody Allen doesn’t approve of them.

Finally, this romcom ‘A RAINY DAY IN NEW YORK’ is, above anything else, incredibly true to its creator Woody Allen, enriched with his familiar use of witty, self-deprecating language and romantic flair. Woody Allen's somehow even makes New York seem quite bleak and uninviting. That said there are the occasional magical, charming moments. This is an excellent film, and all of the actors are completely brilliant. It’s exactly what you want to experience from this Woody Allen film. The film has no qualms about demonstrating that older men can find younger women refreshing and a young woman can find certain older men, well, interesting. But what might qualify as sleaze factor here is actually practiced more by women than by men. A cheating wife, an elder woman of means, a young woman with flexible morals. Only one male is an outright smooth operator textbook Lothario. ‘A RAINY DAY IN NEW YORK’ has struggled to find a USA distributor due to controversy surrounding Woody Allen, although it is available in some countries, and now luckily including the United Kingdom. Very Highly Recommended! 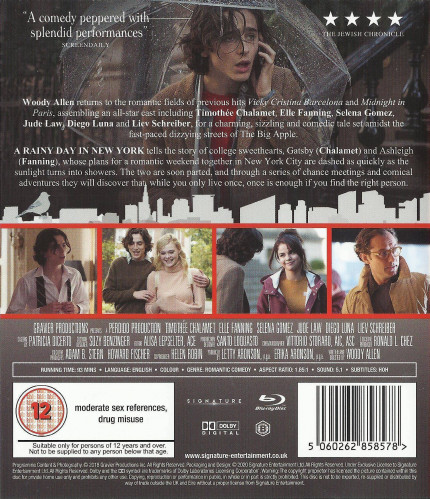