Based on the true life story and international best-selling book, “A Street Cat Named Bob” and is a moving and uplifting film that will touch the heart of everyone. When London busker and recovering drug addict James Bowen finds injured ginger street cat Bob in his sheltered accommodation, he has no idea just how much his life is about to change.

FILM FACT No.2: On 24th August, 2015 it was announced that Roger Spottiswoode would direct a film based on the book A Street Cat Named Bob by James Bowen, while Tim John scripted the film. Adam Rolston would produce the film through his Shooting Script Films. The Exchange sold the film's international rights. Maria Nation also wrote the script. Principal photography on the film began on 25th October, 2015 in London, at Twickenham Film Studios and on location in Covent Garden. Filming wrapped up on 6th December, 2015. The world premiere of ‘A STREET CAT NAMED BOB’ took place at the Curzon Mayfair Cinema, London on 3rd November, 2016 and was attended by HRH The Duchess of Cambridge.[9] The film opened to the public in the UK on 4th November, 2016 and in the USA on 18th November, 2016.

Andrew’s Blu-ray Review: ‘A STREET CAT NAMED BOB’ [2016] is based on the international best-selling book. This very magical film definitely gives you the true feeling of a good story of how James Bowen, a busker and recovering drug addict, who had his life transformed when he met a stray ginger cat named Bob.

It was actually based on a real true story set in London about a man, James Bowen, who while trying to change his homeless life around, and one day encounters a ginger cat in his flat and the two become very up close and personal buddies. But thanks to some great direction from Roger Spottiswoode, the cast, and feline, are in good hands.

James Bowen [Luke Treadaway] is homeless and living on the streets of London. All he has with him is his guitar and the clothes on his back and he busks wherever and whenever he can. He is also a recovering drug addict, trying to stay clean while working on improving his life. With a little help from his support worker Val [Joanne Froggatt], she manages to secure a small bedsit for him, enough to keep him warm and dry, provided that he stays clean. Val informs him that if any of his random drug tests come back positive for narcotics, he’ll be out on the street again.

In the earlier part of the film, we witness James Bowen living, sleeping and foraging for food on the streets of London, but when he finally gets his own place, you feel a great sense of relief for him especially, and when he settles into a hot bath, for the first time in years, only then do you realize that you are truly invested in the character of James Bowen.

James Bowen makes friends with his neighbour Betty [Ruta Gedmintas], who just happens to work for the RSPCA and one night, awoken from sleep, James discovers a ginger cat in his living room. Thinking the feline probably belongs to a neighbour, he spends the next day trying to return the animal but with little success. Noticing injuries on the cat, he asks Belle to help him out and once back home, the two become inseparable.

James Bowen names the cat Bob and accompanies James whenever he busks and crowds begin to form, wanting to get a glimpse of the musical duo. With a little cash coming in, James is tempted to go back on the drugs but not wanting to throw away what little he has built up, he tells Val he is ready to come off the Methadone, the drug which has replaced his heroin use and when she warns him that the withdrawal symptoms will be pure hell, he insists on moving forward anyway. Watching James Bowen undergo this process is both harrowing and heart-breaking but with Bob his cat by his side, he eventually makes it out of the dark.

For a supposed family-friendly film, it certainly does not shy away from depicting life on the streets and drug use. The film walks a fine line between oversentimentality and unrelenting grimness every now and again, but for a film of this scenario, that is to be expected. It all ends with James Bowen getting a book deal and rekindling his relationship with his estranged father Nigel Bowen [Anthony Head] and if it weren’t for the fact that this all happened in real life, this feel good film would most certainly not be receiving the glowing reviews it has so earned. I might also point out that the cat used in the film, is the real-life Bob that still lives today with James Bowen in his new house.

Through both the close-ups of Bob the street savvy cat, and the perspective through Bob’s eyes shots, you can’t help but begin to fall in love with this wonderful loveable cat, and as much as you root for James Bowen, you cheer Bob for his dedication and love for James Bowen. But all in all, that cat is too darn cute for words, and almost makes you want to get have a cat to own.

Luke Treadaway plays the conflicted but determined James with great conviction and it is his sole performance that literally carries the film. Joanne Froggatt and Ruta Gedmintasare are both admirable in their respective roles but it is Luke Treadaway that shines here. If you’re curious about the real life James Bowen and Bob the Street Cat, you can look them up on YouTube.

‘A STREET CAT NAMED BOB’ is a wonderful joyous and very emotional film, even if you are not a lover of cats. You certainly root for the characters in the film, especially you wanting James Bowen to get clean, and you feel grateful that Bob the cat came into someone’s life and made so much of a difference. It is easy to see why ‘A STREET CAT NAMED BOB,’ and James Bowen’s real life account on how a ginger moggy turned his life away from drugs and desperation, has made it to the screen and it offers a huge and potentially emotional characterisation and a social-media-friendly cat story, all wrapped up in a really upbeat tale of hope, unlikely friendships and redemption.  The story explores James Bowen’s relationship with an animal activist neighbour Bettie, frosty encounters with his posh dad and his new-found friendship with an injured cat that does wonders for his busking. Here we have a very loveable joyous film with a heart in the right place, hope for the future and made you feel you have viewed something truly magical. As the credits appear on the screen, we get to view photos of the real busker James Bowen with his cat Bob in different locations in London, which I thought was a nice thing to view.

Blu-ray Image Quality – Sony Pictures Home Entertainment brings you once again something that offers you a steady, fairly sharp 1080p image presentation and an equally impressive 2.40:1 aspect ratio viewing experience. The overcast skies of London set the jungle environment atmosphere for much of the film’s 102 minutes. Close-ups have a very nice definition and also have very clean detail in strong clarity. The visuals are not flashy but certainly deliver a crisp impression of James Bowen’s world and especially close ups of Bob the cat.

Blu-ray Audio Quality – Sony Pictures Home Entertainment brings you this Blu-ray with a 5.1 DTS-HD Master Audio soundtrack. The film is built around James Bowen’s frequent street singing, incorporated into a fairly discrete audio experience with ambient depth. This is a very strong sound design, capturing all aspects of the bustling sounds of London. The dialogue aspect of the film is very cleanly heard in a very good balanced sound mix and there is a decent amount of music spread across the front soundstage speakers to good effect.

Special Feature: A Street Cat Named Bob: Behind-the-Scenes Featurette [2016] [1080p] [1.78:1] [33:13] Director Roger Spottiswoode, cast, crew and James Bowen talk about their experience of bringing the heart-warming tale to the big screen and how tried to show how they wanted to make the actor be as realistic as possible and all problems the real James Bowen survived on the streets of London. We get to see lots of behind-the-scene filming at different locations in London where the real James Bowen performed and also filming on the set at Twickenham Studios. We also see James Bowen interacting with Bob the cat and the actor Luke Treadway. Despite running just over 33 minutes, it sure packs in a lot of interesting features and well woth a view. Contributors include: Adam Rolston [Producer], Luke Treadway [James Bowen], Ruta Gedmintas [Betty], Roger Spottiswoode [Director], Joanne Froggatt [Val], Mark Ameg [Animal Trainer], Darren Evans [Baz], James Bowen [Busker], Ruth Sheen [Elsie], George Turner [Graham], Dawn and Mark Dumas [Principal Animal Trainers], Anthony Head [Nigel Bowen]. Sasha and Cleo Dickens [Faith and Pris].

Finally, ‘A STREET CAT NAMED BOB’ [2016] is film that is simply about a cat and his man does not have enough conflict or drama to sustain a narrative, and so we get some other characters and subplots thrown in for good measure. There is a budding romance with James Bowen's hippy vegetarian neighbour Betty, and the strained relationship with James Bowen's dad Nigel. But it is the relationship between James Bowen and his streetwise Bob that mostly sustains the film, and it is totally heart-warming to watch the bond that develops between the two of them. Luke Treadaway puts in a really solid performance, but of course he is often outshone by Bob the cat, who does play himself here, although he does have one or two doubles, and probably at times was busy taking a cat-nap. There are also a few scenes shot where director Roger Spottiswoode shoots from Bob the cat's point of view, especially when Bob is being chased by dogs, or Bob is chasing after a mouse in the house. Still, it is a really reflective and charming tale or even a very charming tail so, of hope and redemption that has its heart in the right place and gives hope to other people that might be in the same situation as James Bowen. Highly Recommended! 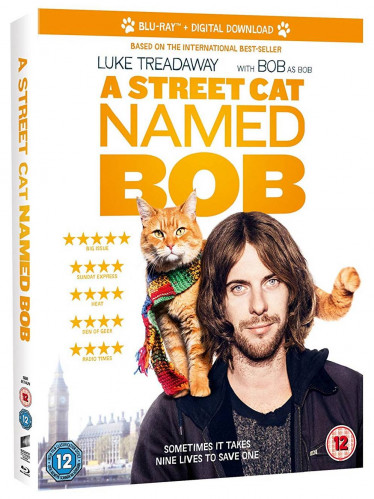 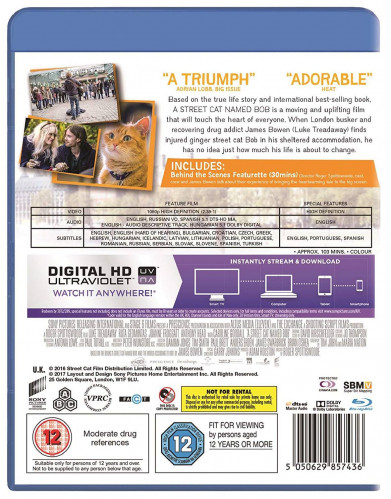