Errol Flynn brings considerable machismo to the role of the Captain Michael Fabian in ‘Adventures of Captain Fabian,’ a romantic, swashbuckling adventure filled with intrigue. Set in 1860 New Orleans, ‘ADVENTURES OF CAPTAIN FABIAN,’ tells the story Lea Mariotte [Micheline Presle] a French Creole maid who seeks revenge against the Brissac family, monied bluebloods who have wrongly framed her for murder. Coming to her aid is the handsome Captain Michael Fabian [Errol Flynn], whose personal animus propels the plot toward a spectacular finale. Vincent Price is cast as George Brissac, the weak willed Brissac nephew, with Agnes Moorehead, playing against type, and providing comic relief as Lea Mariotte’s confident, Aunt Jezebel.

Andrew’s Blu-ray Review: The film was originally known as ‘The Bargain’ and was based on a script by Errol Flynn himself. ‘ADVENTURES OF CAPTAIN FABIAN’ offers Erroll Flynn and Micheline Prelle in a romance, intrigue and swashbuckling capers. Possibly to give authentic Gallic backgrounds and flavouring to this heavy-handed tale of Old New Orleans. Producer William Marshall packed the stars off to France, along with Agnes Moorehead, Vincent Price and Victor Francen, and succeeded at the location shoot. Errol Flynn, again wrote the screenplay himself, keeping his role down to a few suave walk-ons and pencilling in a fat one for his co-star, who happens to be the producer's spouse.

The story is about young maid Lea Mariotte [Micheline Presle], who is dissatisfied with her social position, or lack thereof, yet resentful of the upper class whom she has chosen to serve. When the family goes away on holiday, she invites all her Cajun friends and scruffy Aunt Jezebel [Agnes Moorehead]. Lea Mariotte dons the lady's clothes and beds the lady's fianc&eacute;e George Brissac [Vincent Price], and she wants to marry him, and his ill-begotten money, but George Brissac is obligated to his father's wishes and the family's society reputation to pursue the family business and marry according to his station.

As the vengeful Lea Mariotte [Micheline Presle] the French Creole who is framed on a murder charge by some local bluebloods, she is saved by the roving Captain Michael Fabian [Errol Flynn], who decides to help her strike back. Not that Ms. Micheline Presle needs much aid, although she is constantly moaning about the fate of her poor mother. That lady, it seems, was hanged but, it develops, not soon enough. For Ms. Micheline Presle ruins the whole situation. She tricks a weak nephew, George Brissac [Vincent Price], into marriage and the murder of his uncle, authoritatively played by Victor Francen.

When Captain Michael Fabian sails back into town, the inhabitants are abuzz; he has his eye on Henri Brissac, and suspects him responsible for his father's death and the disappearance of merchant earnings. When he sees Lea Mariotte putting on airs in the tavern, he buys the establishment for her on a whim, and then suddenly disappears again without warning, but this we never find out why.

On the night before George Brissac's wedding, he and his fellow drunken pals enter the tavern during their rounds. Lea Mariotte lures him to his mansion, where they spend the night. Henri Brissac [Victor Francen] is furious, and threatens to strip his no-good son of the family inheritance. For the first time, George Brissac asserts himself, but to murder. Lea Mariotte conditionally helps him bury his father's body, and sees to it that his jacket is mixed in with the dirt. The enigmatic Captain Michael Fabian re-joined the picture at this point. When he starts to demand a little affectionate payback for Lea Mariotte’s success, especially find something is found with the body of Henri Brissac when it is discovered.

This is a slightly bizarre storyline, with slightly flat exaggerated characters, especially Aunt Jezebel [Agnes Moorehead] to the point of being too cartoony, and there are plenty of plot holes. For example, Captain Michael Fabian's intense desire for Lea Mariotte later in the film, is sudden and unexpected. Earlier in the film, he appeared to regard her with passing amusement. Could it be that this was one of Errol Flynn's walk in the park type picture that is mentioned in several autobiographies, about that time in his life, on the other hand maybe it is possible that Republic Pictures meagre budget, would neither allow for a bigger budget or afford to stand up to the main star, still we will never know.

Anyway to sum up ‘ADVENTURES OF CAPTAIN FABIAN,’ we  have the oh so wonderful thespian Vincent Price gives a wonderful over the top performance, one that we eventually see in other camp villainous roles he appears in future films, and the mainstay of his subsequent fantastic film career. Meanwhile Ms. Micheline Presle is surprisingly convincing and calculating vixen in a Joan Crawford mould of acting, and a typical role for this particular actress, who I personally have never heard of before, but have been told that it is a typical role for this actress, who is better known for playing straight romantic leads. But sadly Errol Flynn did not show his full potential in this film, which is a shame, especially if you compare his vast acting talent in other worthy films for this actor. Finally, it is the contributions from these talented performers, which makes the film tolerable, if not strangely compelling at times, but you can’t help cringing at the ludicrously contrived camp ending, especially Ms. Micheline Presle moaning and groaning when the ships mast falls on her, sadly Ms. Micheline Presle failed to get her OSCAR® that year.

Blu-ray Image Quality – ‘ADVENTURES OF CAPTAIN FABIAN’ is presented on Blu-ray courtesy of Olive Films and Republican Pictures with a very nice encoded 1080p image transfer, with a respectable aspect ratio of 1.37:1. And it is great to finally see a Republic Pictures brought out by Olive Films, and I hope there will be more releases will be coming out in the future from the fabulous Republic Pictures vast catalogue of films. Contrast is occasionally variable, but is mostly solid, delivering very good black levels and decently modulated grey scale. Grain is fairly heavy throughout the presentation. While the entire transfer is on a slightly soft side, close-ups can provide decent to very good levels of fine detail.

Blu-ray Audio Quality – ‘ADVENTURES OF CAPTAIN FABIAN’ features only a 2.0 DTS-HD Master Audio experience. In this case it's higher than average amounts of hiss, which I suppose is related to some of its age related issues of the soundtrack. If you turn your AV receiver up a bit too much, the soundtrack problem of course increases slightly and so there is a fine balance needed to be maintained at a good level, but despite this, once you get into the film, this problem does not make me want to look out for the hiss problem. Within that context, fidelity is very reasonable, especially for the age of the film, because it offers good reproduction across all frequency ranges, but sounding typically ambience of its period, as per many of the lower fidelity soundtracks of that era.

Blu-ray Special Features and Extras: Sadly, Olive Films decided it did not need to add any special features, which is a shame, as I am sure in the Republic Pictures archives they must have some rare hidden gems, if not they should of supplied an Original Theatrical Trailer.

Finally, if you are curious to see ‘ADVENTURES OF CAPTAIN FABIAN’ I am hoping it may offer you some kind of pleasures, if you like dashing swashbuckling heroes. The film is at times slightly hit and misses most of the time, but despite a rather over the top spirited performance by Ms. Michelin Prelle and a very good supporting turn by Agnes Moorehead, as well as a very sinister Vincent Price. As for Errol Flynn, his role is slightly and sadly diminished at times, to the point of only being in a cameo role, especially in this his own conceived film, hovering around the edges and trying not to intrude too much, for some unknown reason, perhaps in the hope that his absence will make the film’s heart grow much fonder. But despite lots of critics hating the film, I really enjoyed it very much and has some really good moments that I really enjoyed and I am glad I purchased this Blu-ray disc, as I personally had never heard of this film before or ever seen it in the cinema or on the television, but again I am so pleased it is now my Blu-ray Collection, as I love any film that has the swashbuckling hero of Errol Flynn. Highly Recommended! 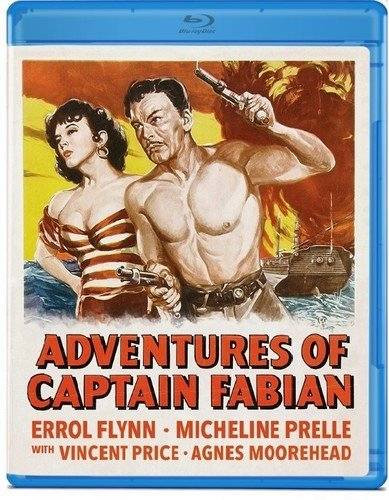 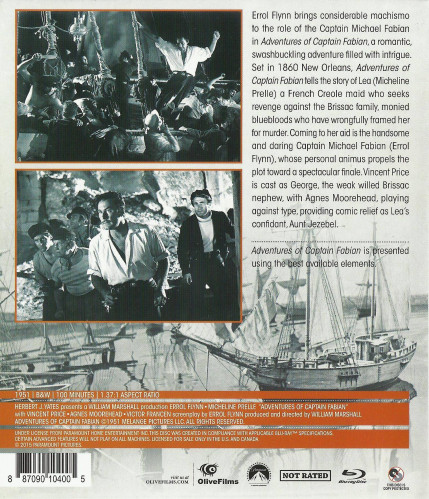