A story about life, love and loss, Steven Spielberg directs ‘ALWAYS,’ a heart-warming romantic adventure. After sacrificing himself to save a friend Al Yackey [John Goodman], a daredevil firefighting pilot Pete Sandich [Richard Dreyfuss] returns to earth to help his surviving girlfriend Dorinda Durston [Holly Hunter] move on with her life. Breath-taking cinematography and exhilarating aerial choreography highlight this compelling adventure that features a special appearance by Audrey Hepburn.

FILM FACT No.2: Principal photography took place in Kootenai National Forest, Montana, with some scenes filmed in and around Libby, Montana. Some 500 people from nearby Libby, Montana were recruited for the film as extras to act as wildland firefighters. Those scenes set in "Flat Rock, Colorado" were filmed at and around the Ephrata airport in eastern Washington. Two Douglas A-26 Invader fire bombers (Douglas B-26C Invader No. 57][12] and Douglas TB-26C Invader No. 59 were prominently featured in Always.[14] The flying for the film was performed by well-known film pilot Steve Hinton and Dennis Lynch, the owner of the A-26s. A number of other aircraft also appeared in Always: Aeronca 7AC Champion, Bellanca 8KCAB Super Decathlon, Beechcraft Model 18, Cessna 337 Super Skymaster, Cessna 340, Consolidated PBY-5A Catalina, de Havilland Canada DHC-6-300 Twin Otter, Douglas C-54 Skymaster, Fairchild C-119C Flying Boxcar, McDonnell Douglas DC-10 and North American B-25J Mitchell. Two helicopters were also seen: Bell 206 JetRanger and Bell UH-1B Iroquois. ‘ALWAYS’ was the last ever film in which Audrey Hepburn appeared.

The real revelation for me is that ‘ALWAYS’ is a film that will definitely not be of any interest to younger viewers and I can understand why younger viewers are more interested in the likes of the Indiana Jones franchise and especially a more mature story of grieving adults and trying to move on with their lives. ‘ALWAYS’ [1989] is a remake of the 1943 romantic drama of the film ‘A Guy Named Joe,’ that is about a sentimental, patriotic Hollywood fantasy about a dead World War II bomber pilot, Major Pete Sandidge who becomes a guardian angel to another pilot, Capt. Ted Randall, guiding Randall through battle and helping him to romance his old girlfriend, despite her excessive devotion to Major Pete Sandidge's memory. Whereas with the ‘ALWAYS’ [1989] film, here Steven Spielberg did not treat the film as a direct scene-by-scene repeat of the earlier World War II melodrama. The film, however, follows the same basic plot line: the spirit of a recently dead expert pilot mentors a newer pilot, while watching him fall in love with his surviving girlfriend. The names of the four principal characters of the earlier film are all the same, with the exception of the Ted Randall character, which is called Ted Baker and in the remake Pete's last name is "Sandich,” instead of "Sandidge."

With this Steven Spielberg ‘ALWAYS’ [1989] film, here we find Pete Sandich [Richard Dreyfuss] is a daredevil pilot who’s just about to settle down with his gal Dorinda Durston [Holly Hunter] when his plane explodes rescuing his wingman Al Yackey [John Goodman]. In the afterlife, Hap [Audrey Hepburn] sends Pete Sandich back to say goodbye and help his friends move on. He can influence their thoughts but they can’t see him or hear him directly.

This is a lovely story about dealing with a great loss of a loved one. It is a delicate balance between honouring Pete Sandich’s memory and being locked in mourning, and Pete Sandich can be a little selfish at first. But scenes like that were usually very boring for youngsters viewing this film when Al Yackey and Dorinda Durston are at a stagnant stage in the film, especially reflecting on their loss, and those are the most powerful scenes to me now. John Goodman is a national treasure, bringing his power to Al Yackey’s repressed grief and explosion.

Richard Dreyfuss really was the leading man, who carries this whole film, from Pete Sandich’s living bravado to the humour and conflict of the abstract concept of a spirit watching his friends move on. There is quite a bit of humour in Pete Sandich’s messing with the living, which I also wouldn’t have appreciated as a kid, but also the relevance of Pete Sandich feeling bad about it when he sees the consequences. Holly Hunter is saddled with a bit of a reactive part with a tomboy mechanic in an emotional fatal position for most of the film, but she’s still Academy Award® Winner Holly Hunter for a reason. You never doubt she’s going through the greatest loss of her life.

‘ALWAYS’ is a really beautiful looking film, and no wonder. It was shot by Mikael Salomon, the director of the film ‘Hard Rain.’ It’s not Steven Spielberg’s usual Vilmos Zsigmond or Janusz Kaminski, and I wonder why it’s the only time Steven Spielberg worked with Mikael Salomon, because the aerial action is absolutely totally brilliant, as well as awesome, and the shots of the afterlife are epic in their haunting stillness. Those scenes look totally brilliant with this exclusive Universal Pictures UK Blu-ray release.

For additional forest fire footage, Steven Spielberg re-created fires by re-burning areas of Yellowstone that had already been destroyed. In order to control the new fires safely, the special effects team, under the supervision of coordinator Mike Wood, rigged the pre-burned trees to ignite on cue. Cinematographer Mikael Salomon's beautiful photography throughout ‘ALWAYS’ provides one of the film's greatest strengths. His crisp images capture the dramatic visuals of the raging forest fires and the exciting flying sequences, expertly choreographed by veteran aerial coordinator and pilot James Gavin. Long-time Steven Spielberg composer John Williams created the musical score for ‘ALWAYS.’ For Pete Sandich and Dorinda Durston's special song, Steven Spielberg had wanted to use the obvious choice of Irving Berlin's romantic tune "Always." However, when approached about getting the rights, Irvin Berlin refused. The 94-year-old composer said he was saving the song for himself to use in the future. Instead, Steven Spielberg used the equally appropriate Jerome Kern ballad "Smoke Gets in Your Eyes."

SMOKE GETS IN YOUR EYES (Written by Jerome Kern) (Lyrics by Otto A. Harbach) [Performed by JD Souther]

SMOKE GETS IN YOUR EYES (Written by Jerome Kern) (Lyrics by Otto A. Harbach) [Performed by The Platters]

Blu-ray Image Quality – Universal Pictures UK has made a great leap forward with this new 2015 remastered release, compared to the more inferior 1999 DVD release, as what you view is a stunning 1080p encoded image and an equally stunning 1.85:1 aspect ratio that shows off the film in a spectacular way, especially with lovely greens of the forest, yellows and orange of the flames and reds of the fire retardant are all strong. The white of Dorinda's dress during the party scene pops out of the frame, against the smokey brown and yellow background of the firefighter crew surrounding her. Hap's outfit, which came from Audrey Hepburn's personal wardrobe, has an even brighter white glow. Detail is plentiful throughout; although there's somewhat less of it in darker shots where the lighting has been deliberately manipulated to differentiate areas of the frame, especially with a long scene in the cockpit of a plane near the film's end is a noteworthy example. This phenomenon has always been part of the film and is not a fault of this 1080p transfer.

Blu-ray Audio Quality – Universal Pictures UK has released this Blu-ray with an excellent 5.1 DTS-HD Master Audio that is very solid, but slightly held back slightly by the film’s dated acoustics. Still, as it is a mostly dialogue-driven drama, it sounds fabulous with unexpected aggressiveness during the aerial bombing missions, as well as the Fire Eaters dive past and into burning trees, scraping their wings (and more) against branches and hearing flames lick at them from all sides. The sound mix puts the viewer into the pilot's seat, which, depending on one's taste for such things, can be either exciting or unnerving. The scenes with the ground crews are equally powerful, with the sound of uncontrolled blazes all over. Scenes near the film's end involving a water escape are equally enveloping. John Williams supplied the carefully calibrated score, which traverses the film's complex emotional territory with the composer's characteristic delicacy. So, if you do love this particular Steven Spielberg film that you will finally get a viewing experience that replicates its opening night splendour, especially with this stunning 2015 release upgrade, then this 2015 Blu-ray release is the one for you.

Theatrical Trailer [1989] [480i] [1.37:1] [2:18] This is the Original Theatrical Trailer for ‘ALWAYS,’ which is exactly the same as the Universal Pictures 1999 inferior DVD release. Which of course means that it is sadly very grainy, but despite this, it is still a great presentation of this Steven Spielberg film.

Finally, this 1989 ‘ALWAYS’ film that has now been given a brand new lease of life with this 2015 Blu-ray remastered release, and is of course a film that is drenched in nostalgia for things in the past, meaning it has the genre of the old style film that was released for an older style of film-making, with that ideal of romantic love, even by the standards of 1989 when it was originally released, which some might say that is considered very corny; especially for the excitement of a new relationship before it gets complicated by marriage, family and the practical details of building a life together. Steven Spielberg himself has often said that he could not have made certain films except when it happened at particular times in his life, ‘ALWAYS’ was released in the same period when he was going through a divorce with his first wife, especially dealing with such a sensitive subject and dealing with themes of letting go and moving on. This new 2015 Blu-ray presentation by Universal Pictures UK is by far the best the film has ever looked and is a fine presentation of the film. Highly Recommended! 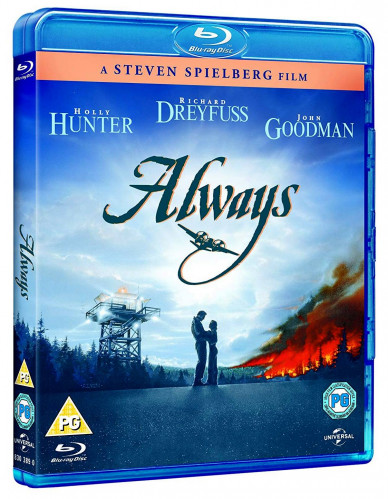 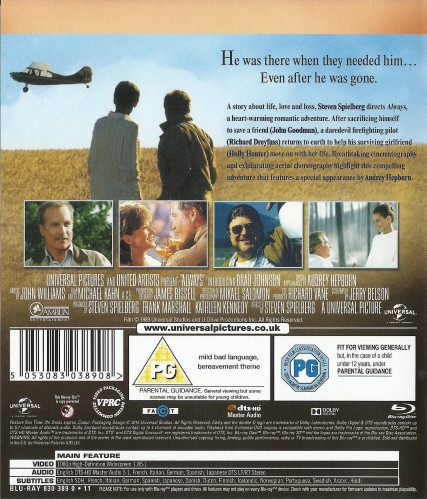