AN AMERICAN TAIL [1986 / 2014] [Blu-ray + Digital HD ULTRAVIOLET] [USA Release]
Steven Spielberg and Don Bluth Bring You A Story That Will Live in Your Hearts Forever!

From Steven Spielberg's Amblin Entertainment comes the story of a courageous little mouse named Fievel Mousekewitz [Phillip Glasser], one of the most endearing animated characters ever created. Journeying by ship from Russia at the turn-of-the-century to America in 1885, Fievel Mousekewitz is lost at sea during a ferocious storm. Washed ashore in New York Harbor, Fievel Mousekewitz braves the perils and wonders of a strange new world in a thrilling quest to find his family. Filled with humour, adventure and action, this heart-warming tale is fun for the entire family!

FILM FACT No.2: Production began in December 1984 as a collaboration between Spielberg, Bluth, and Universal, based on a concept by David Kirschner. Spielberg had asked Bluth to "make me something pretty like you did in ‘The Secret of NIMH’...make it beautiful." Originally, the concept consisted of an all-animal world, like Disney's ‘Robin Hood,’ but Don Bluth suggested featuring an animal world existing as a hidden society from the human world, like Disney's ‘The Rescuers.’ After viewing ‘The Rescuers,’ Steven Spielberg agreed. Emmy-award-winning writers Judy Freudberg and Tony Geiss were brought in to expand the script. Don Bluth described the process of voice casting as "sometimes you can select a 'name' voice [i.e., a well-known actor] because it fits the essence of the character so well. Other times, you need to seek an obscure voice, close your eyes, and just listen to it. If it has the highs and lows in the deliverance of lines and it captures the focus of the character, it allows the animators to get a true fix on the action." In designing the look of the film and its characters, Don Bluth worked with Amblin Entertainment and the Sears marketing department (Sears had a major marketing push on the main character). He decided to make a stylistic shift from the more angular "modern style" of animation of the time to a style similar to Disney animation from the 1940s, where the characters have a more soft and cuddly feel. Don Bluth preferred to storyboard an entire picture, but it soon proved to be an enormous task. Larry Leker was brought in to assist, turning Don Bluth's rough sketches into final storyboard panels. The film was also plagued by union difficulties. Don Bluth had agreed to accept $6.5 million to get it produced (which later grew to $9 million), at a time when Disney was spending around $12 million per film. Don Bluth knew it would be difficult, but felt it was worth the sacrifice to work with Steven Spielberg on a major project. With the agreement of his employees, salaries were frozen for a year and half. Unlike the former Don Bluth studios, the new Sullivan Bluth studios were non-union, and when many workers attempted to withdraw from the union, it sparked a battle between Bluth and the union that continued through most of production. It was mostly this struggle that later compelled Don Bluth to relocate to Ireland, which he felt offered a more supportive atmosphere. While all of the animal characters were animated from scratch, the human characters were animated using the rotoscoping technique, in which sequences were shot in live action and then traced onto animation cells. This provides a realistic look for human characters, and distinguishes the cartoonish animal characters from the more realistically animated humans. Rotoscoping is frequently employed in Don Bluth films, including ‘The Secret of NIMH’ and ‘Anastasia.’ In the visual effects industry, the term Rotoscoping refers to the technique of manually creating a matte for an element on a live-action plate so it may be composited over another background.

Andrew’s Blu-ray Review: ‘AN AMERICAN TAIL’ is an 1986 American animated adventure film directed by Don Bluth, produced by Don Bluth, John Pomeroy, and Gary Oldman, and filmed by Universal Studios, Sullivan Bluth Studios and Amblin Entertainment. The animated film tells the story of Fievel Mouskewitz [Phillip Glasser] and his family as they emigrate from Russia to America for freedom. However, Fievel Mouskewitz gets lost and must find a way to find his family in the vast city of New York.

In 1885 Shostka, Russia, the Mousekewitzes a Russian-Jewish family of mice and decide to immigrate to America after an army of cruel cats that belong to the Cossacks, and actual reference to historical facts occurring in Russia at the time, destroy their village. During the trip overseas, the family's young son, Fievel Mouskewitz gets separated from the others while and washes overboard in a storm, after he decided to see the fish during the terrible weather by throwing his hat on the deck. The Mousekewitz Family arrives in America, sadly believing they have lost their son Fievel Mouskewitz.

Fievel Mousekewitz, however, floats to America in a bottle, and after a pep talk from a French pigeon named Henri [Christopher Plummer], embarks on a quest to find his family. He is waylaid by conman Warren T. Rat [John Finnegan], who gains his trust and then sells him to a sweatshop. Fievel Mousekewitz escapes with Tony Toponi [Pat Musick], a street-smart Italian mouse, and they join up with Bridget [Cathianne Blore], an Irish mouse trying to rouse her fellow mice to stand up to cats. When a gang of some called the Mott Street Maulers attacks a mouse marketplace, the immigrant mice learn that the tales of a no-cat country is not true.

Bridget takes Fievel Mousekewitz and Tony Toponi to see Honest John [Neil Ross], a drunk, but reliable politician who knows all the voting mice in New York City. But as the Mousekewitze Family have not yet registered to vote, he can't help Fievel Mousekewitz find them. Meanwhile, his sister, Tanya Mousekewitz [Betsy Cathcart], tells her gloomy parents she has a feeling that he is still alive, but they urged her that the feeling would soon go away. Led by the rich and powerful Gussie Mausheimer [Madeline Kahn], the mice hold a rally to decide what to do about the cats. Warren T. Rat is extorting them all for protection that he never provides. No one has any idea what to do about it, until Fievel Mousekewitz whispers a plan to Gussie Mausheimer.

The mice take over an abandoned building on Chelsea Pier and begin constructing their plan. On the day of launch, Fievel Mousekewitz gets lost and stumbles upon Warren T. Rat's lair. He discovers that he is actually a cat in disguise and the leader of the Maulers who later capture Fievel Mousekewitz. A goofy, soft-hearted orange cat named Tiger [Dom DeLuise] takes a liking to a crying Fievel Mousekewitz and sets him free.

Fievel Mousekewitz races back to the pier on the 4th of July with the cats in hot pursuit when Gussie Mausheimer orders the mice to release the secret weapon. A huge mechanical mouse, inspired by the bedtime tales Papa Mousekewitz [Nehemiah Persoff] told to Fievel Mousekewitz of the "Giant Mouse of Minsk," chases the cats down the pier and into the water. A tramp steamer bound for Hong Kong picks them up and carries them away.

THERE ARE NO CATS IN AMERICA (Music by James Horner and Barry Mann) (Lyrics by Cynthia Weil) [Performed by Nehemiah Persoff, Johnny Guarnieri, and Warren Hays]

POOR WAND’RING ONE from "The Pirates of Penzance" (Lyrics by W.S. Gilbert) (Music by Arthur Sullivan)

Blu-ray Image Quality – Once again Universal Pictures and Amblin Entertainment brings you this beautiful delightful Blu-ray with a nice quality 1080p encoded image and an equally impressive 1.85:1 aspect ratio. Sharpness comes across as concise and distinctive. No signs of jagged edges or moiré effects appeared, and I also saw no problems with edge enhancement. For the most part, colours came across as really lovely and precise. Most of the hues were acceptably vibrant and dynamic. However, some tones appeared bland and murky, so inconsistency occurred; the grain was a factor, as it tended to add murk to the colours. Black levels were nicely deep and rich, but shadows seemed somewhat less so. ‘AN AMERICAN TAIL’ is a softer film, but not in a bad way, which I suppose relates with problems inherent to its age and the original animation cells. What a shame Universal Picture could not re-commissioned a ground-up restoration and remaster using the film's original negatives and animation elements, this Blu-ray release might be really something special. Hopefully, some sort of Anniversary edition will get a new re-master, but I'm not holding my breath, but despite this, I really enjoyed the visual experience.

Blu-ray Audio Quality – Once again Universal Pictures and Amblin Entertainment brings you this beautiful delightful Blu-ray with an equally nice 5.1 DTS-HD Master Audio experience. Voices are reasonably clean and clear, that is decidedly decent, and effects and music are only held back by age. Output is mildly engaging and rear speaker activity is sparse, leading to a rather flat, front-heavy experience, but it's all in keeping with the animated film's original sound design. James Horner’s composed music demonstrates the greatest expansion, as the score offered general spread to the sides and the rear and the imaging was pretty nice, as the music spread across the channels exceptionally well. Effects add some pep and showed decent localisation and movement. Audio quality was pretty good. Speech appeared natural and concise; only a little edginess ever marred the lines, as they usually remained distinctive. Effects appeared reasonably vivid, and they boasted nice bass during louder scenes. Music was also warm and lively. Nothing here dazzled, but the audio was more than adequate for its age. To my surprise, the 5.1 DTS-HD track offered a good step up over its predecessor inferior DVD 2.0 sound mix, that was a total mess, but the DTS-HD edition is a lot clearer, better placed and more involving, so making the Blu-ray’s audio was a definite improvement over its predecessor.

Special Feature: "Somewhere Out There" Sing-Along [1986] [480i] [1.37:1] [2:12] Here you get to sing along karaoke style, meaning you get the words appearing in the video and Fievel Mousekewitz hat bounces over each word, which is sung by Fievel Mousekewitz [Phillip Glasser] and Tanya Mousekewitz [Betsy Cathcart]. It was composed by James Horner and Barry Mann with lyrics by Cynthia Weil. I just cannot understand why it was not in the 1.85:1 aspect ratio and sadly is of very poor quality.

Finally, ‘AN AMERICAN TAIL’ holds a special place in many an animation fan's heart, especially mine, while Disney Animation owes the film almost everything. It might not be classed as a classic animation film in every sense of the word, but it does stand the test of time. It stands tall among 1980s animated features, though, even if critics past and present seem unimpressed with all that Don Bluth brings to the screen. ‘AN AMERICAN TAIL’ feels like a mini masterpiece that never quite got its due attention or given the publicity it deserved and was unfortunately quickly rushed out for a cinema release. Given its ties to Steven Spielberg, it’s easy to also see the film as being an animation experiment that was meant to help him figure out how to execute his next film, ‘Empire of the Sun,’ which is basically a very similar genre film that also follows a child who is separated from his family, and goes through immense hardship and betrayals, and is then reunited. ‘AN AMERICAN TAIL’ holds a special place in many an animation fan's heart, that is a classic in its own right and I feel it stands the test of time and I for one love it, despite all the nasty stupid ignorant critics who do not know a good animation film if it starred them in the face. Highly Recommended! 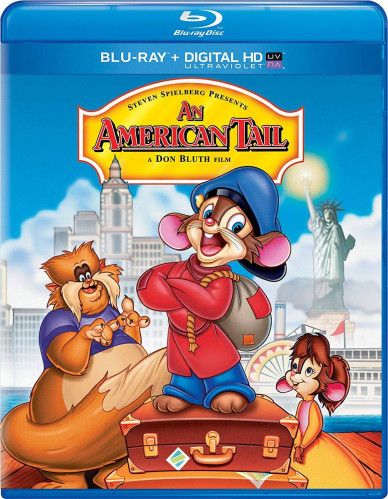 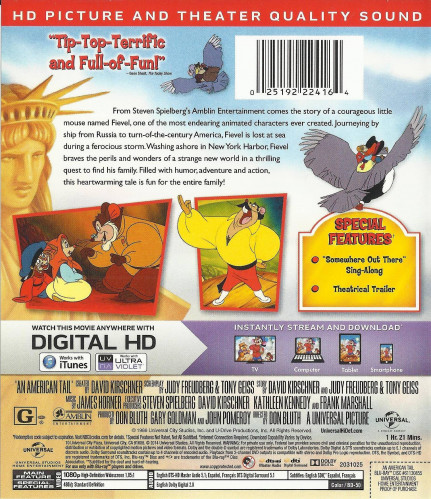