From filmmaker Steven Spielberg, ‘AN AMERICAN TAIL: FIEVEL GOES WEST’ is a delightful full-length animated feature that continues the adventures of the brave young mouse who captured audiences hearts everywhere. Lured out west by the crafty Cat R. Waul, and Fievel joins forces with famed lawdog Wylie Blurp to thwart a sinister plot to transform unsuspecting settlers into...mouseburgers! This heart-warming family film features the voices of James Stewart, Dom DeLuise, John Lovitz, Amy Irving and many more along with an original music score including "Dreams to Dream" sung by Linda Ronstadt.

FILM FACT No.1: Awards and Nominations: 1992 Golden Globes: Nominated: Best Original Song in a Motion Picture for James Horner (music) and Will Jennings (lyrics) for the song "Dreams to Dream."

FILM FACT No.2: The film was the first production for Steven Spielberg's Amblin Entertainment animation studio, and collaboration with the Universal Pictures and Amblin Entertainment, whose offices were located in London. The Frankie Laine song "Rawhide" is played in the tumbleweed scene in the animated film, although the version used is from ‘The Blues Brothers’ film. This sequence was designed and laid-out by an uncredited Alan Friswell, a special effects expert and stop-motion animator who was employed by the Amblin Entertainment studio at the time. James Horner returned to write the music score for the film, reusing old themes and introducing new ones. Amy Irving, who voiced Miss Kitty in the film, was Steven Spielberg's ex-wife. During production, he married Kate Capshaw who had worked with him on the film ‘Indiana Jones and the Temple of Doom’ in 1984. Don Bluth, the original film's director, had no involvement with this animated film, but instead, it was directed by Phil Nibbelink and Simon Wells that got involved with the animated film.

‘AN AMERICAN TAIL: FIEVEL GOES WEST’ is the second film following the animated film ‘An American Tail.’ It is set chronologically fourth in the in-series timeline. The film was not directed by Don Bluth, but was instead directed by Phil Nibbelink and Simon Wells. It is the first animated film for Universal Studios and Amblin Entertainment. Because of having different directors and a different animation team working on it, it differs considerably from the first film, in both look and tone.

‘AN AMERICAN TAIL: FIEVEL GOES WEST’ continues the saga of the Mousekewitzes, a plucky family of immigrant mice who, in the animated 1986 hit "An American Tail," made their way from Czarist Russia to America, naively believing they would find the streets paved with cheese. The sequel finds the family living a miserable hand-to-mouth existence in a New York City tenement and longing for a better life. Young Fievel Mousekewitz, whose voice is again supplied by Phillip Glasser in a piping boyish voice, dreams of becoming a Wild West lawman like his idol, the legendary canine Wylie Burp. His sister, Tanya, yearns to be a singer also. When we see all the mice get on the train and it sets off to the West Coast of America, and when you see it travelling right across America, the train is very much in the Disney cartoon style, especially like the one in the animated film ‘DUMBO’ and I am just wondering if it was a deliberate use of animation.

In the West, Wylie Burp is surrounded by the Cactus Cat Gang, hopelessly outnumbered, but refuses to back down. Calling himself "Philly the Kid," and Fievel Mousekewitz rushes to his aid. Wylie insists that it is too tough and that Fievel try to get out while he still can. However, Fievel refuses to let Wylie go down alone. He whips out his pistols and starts shooting at the cats, quickly disarming them and causing them to flee. Grateful for being rescued, Wylie thanks Fievel and hands him a badge. Suddenly, Cat R. Waul appears on a store behind Fievel. Wylie warns Fievel, who promptly turns around and fires a shot.

Mama Mousekewitz is heard calling Fievel for his supper. Fievel's bullet turns into a cork tied to his gun, which changes to a toy gun. The rest of the scenery changes from the West to New York and Fievel's adventure are shown to have just been his imagination. At their home, Tanya Mousekewitz is singing "Somewhere Out There" out the window. However, their human neighbours throw fruit and vegetables in her direction, much to her dismay. However, Papa urges her to keep singing, hoping that they'll throw something for desert.

Fievel, still acting like a cowboy, bursts in saying his come to "rustle [himself] up some grub". Mama is displeased by his lateness, but Fievel claims that he had to save Wylie Burp, who was surrounded by the Cactus Cat Gang. Mama calls that a tall tale and sends him to wash his hands, despite Fievel's objection that he washed yesterday. Among a rich, eccentric cast, James Stewart provides the voice of lazy sheriff Wylie Burp and Dom DeLuise steps in as Tiger, Fievel's companion. Directors Phil Nibbelink and Simon Wells recapture the flavour of classic Westerns through vivid camerawork and a painstaking attention to detail. From the gloomy streets of the East to the bright skies of the West, this provides young viewers with a lively and engaging portrait of American immigrant life.

The animated film features two original songs with music by James Horner and lyrics by Will Jennings. "The Girl I Left Behind," a peppy bluegrass number, is performed by Tanya in the Green River saloon, where she makes a sensational debut under the aegis of Miss Kitty. Cathy Cavadini, the voice of Tanya, also sings "Dreams to Dream," a saccharine ballad that is this film's answer to the original movie's hit song, "Somewhere Out There." It is reprised over the final credits by Linda Ronstadt.

‘AN AMERICAN TAIL: FIEVEL GOES WEST’ cleverly draws on the oft-expressed thought that the mythic West was largely an immigrant’s wide-eyed dream of what America should be, in opposition to hellish big-city reality and the old country left behind. Phillip Glasser’s sweet rendition of the mouse’s voice is a major asset, as are the voice parts of Dom DeLuise, as Fievel’s scene-stealing companion, a scaredy-cat who turns brave; John Cleese, as the unctuously villainous Cat R. Waul; and Amy Irving, as the brassy saloon entertainer Miss Kitty. Sadly, there is not much of a plot to speak of, but I still enjoyed the further adventures of Fievel and his Mousekewitzes family.

Regardless of how many may dislike ‘AN AMERICAN TAIL: FIEVEL GOES WEST,’ there is still a general consensus that this animated film is far superior to the later direct-to-video sequels. It also tends to be seen as the best ever sequel to a Don Bluth film, since most others are not highly regarded and although he has not been specific about why he was not being able to follow the story, Don Bluth himself has expressed disliking the film. There are excellent set-pieces, and the lovably-drawling James Stewart is value for money as the mentor character. There are witty ditties from the pen of the late James Horner that kids will enjoy singing along to. It’s a title that’s likely to be loved by younger viewers, though it has less universal appeal than the original, because the themes aren’t as rooted in human experience so it packs less of an emotional punch. The animation is beautiful and refreshing stark in places; the muted colours are a treat for the mature eye.

WAY OUT WEST (Written by James Horner and Will Jennings)

Blu-ray Image Quality – Amblin Entertainment and Universal Pictures presents you this Blu-ray disc release with a very nice 1080p encoded Technicolor image presentation. When you see certain scenes in New York the images can seem soft, but with the start of the animated film the quality is quite stunning and very colourful. There has been a lot of criticism that there are too many little white speckles appearing throughout the animated film, but they only appear now and again to the point you forget they are there at all, and a vast improvement over the inferior DVD release. The animated film looks decent throughout the animated film and was pleasantly surprised how good it looked compared to people who have been too critical about its image performance. But overall the Technicolor image quality is top notch, and is also adequately lively, particularly early on as bright oranges, reds, and blues contrast against the dreary big city blacks, blues, and greys. Image clarity holds up very firm and detailing is solid, generally and again I was quite surprised how well the image quality held up really well.

Blu-ray Audio Quality – Amblin Entertainment and Universal Pictures only offers us a 5.1 DTS-HD Master Audio, but despite this, the presentation frequently takes advantage of all the channels at its disposal, especially with the soaring musical score by the brilliant James Horner. Again the audio presentation is top notch, which I found a pleasant experience. We also get a great deal of an ambient depth with all aspects of very easy sound experience, especially when all the animals speak. We also get a lot of sound enhancing with various scenes, especially when it comes to certain elements, whether it is the music, and the awesome action scenes. There is also a lot of brilliant fun when you get the whiplash sound effects across the stage as the film's titles appear on the screen at the start of the animated film. Another great audio effect is when the dialogue reverberation happen the "sales pitch" in the sewer early on in the animated film. Also another good audio experience was with the scene with the fireworks exploding. So all in all a good effort all round and you will not be disappointed.

Finally, with a lot of sequels this particular Amblin Entertainment animated film sadly succumbs to the law of diminishing returns, for the animated film ‘AN AMERICAN TAIL: FIEVEL GOES WEST’ which is such a shame. The story uses all the familiar ideas that one is used to in a western scenario, without breaking new ground. The final act also feels slightly rushed, where Wylie Burp agrees to help Feivel by training Feivel's feline friend Tiger for the final showdown, there's a short montage scene of the training and then it's straight into the showdown. There's surprisingly little action too, although there are plenty of comedic moments that will keep a younger audience entertained and I have heard through the grapevine, that it certainly captivates young children, as they always say and their assessment of this animated film, by saying, "I like cowboys and I like the funny talking dog." The only slight disappointment is the lack of special features or even the Theatrical Trailer, so a bit of a let down on the part of Universal Pictures, but despite this particular grip, I am pleased to add this Amblin Entertainment animated film sequel to my Blu-ray Collection and cannot understand why it has taken all this time to be released. Highly Recommended! 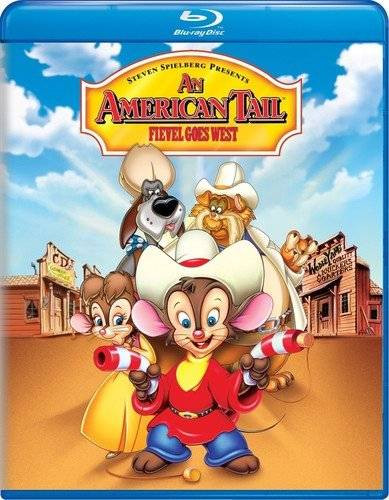 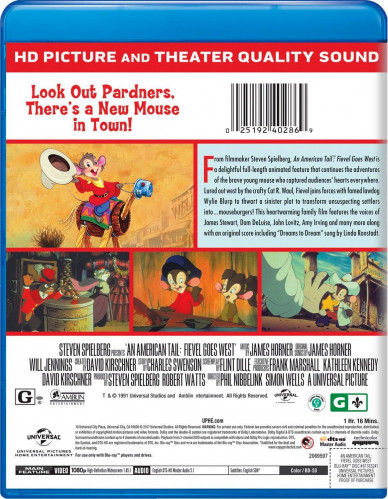