The Birling family are rich, pampered and complacent. It is 1912, and the shadow of the impending war has yet to fall across their lives. As they sit down to dinner one night, celebrating the engagement of the eldest child, Sheila Birling [Eileen Moore], to prosperous business man Gerald Croft [Brian Worth], a knock at the door announces the arrival of a visitor, who will change their lives forever.

Based on the play by J.B. Priestley, ‘AN INSPECTOR CALLS’ stars the incomparable Alastair Sim. And with this special 60th Anniversary Edition has been fully digitally restored and features a brand new extra content.

FILM FACT: ‘AN INSPECTOR CALLS’ was filmed at Shepperton Studios, Shepperton, Surrey, England, under the auspices of the Watergate Productions Ltd. In the original play, the Inspector's name was Inspector Goole.

Andrew’s Blu-ray Review: J.B. Priestley’s superb blend of morality play and thriller transfers well from the stage to the screen, gaining much from Alastair Sim’s masterly performance as the angel of vengeance in the title role. This is a brilliantly successful adaptation of the play which, while remaining faithful to the text, intersperses the dialogue with flashbacks to alter the location somewhat. It's a trade-off and you sacrifice watching the reactions of the characters for a little variety in setting, but it works. It assists what is otherwise a very static piece of writing to become a very good piece of cinema. 60 years old but still tight, riveting and vocal even now, Guy Hamilton's take on J.B. Priestley's stage play “An Inspector Calls” is worthy of a revisit, especially with this stunning CANALSTUDIO Blu-ray release, that has a lovely and even surprisingly crisp print, it's the perfect time to relive this mystery.

Set in a Yorkshire household during the early 1900s, Inspector Poole [Alastair Sim] calls at the home of a wealthy industrialist Mr. Arthur Birling [Arthur Young] to investigate the mysterious circumstances behind the death of a young woman named Eva Smith [Jane Wenham]. Each one of the family has a secret and a series of flashbacks reveals each one of the smug, well-to-do family is partly responsible for driving her to suicide; the father had fired her from his factory, his daughter had got her the sack from a shop, the son had made Eva Smith pregnant, and Mrs. Sybil Birling [Olga Lindo] had refused her charitable aid.

It is strange to think that in the Swinging Sixties, the film ‘AN INSPECTOR CALLS’ [1954] was thought of as a stodgy drawing room drama that had no relevance. It’s true that the action does indeed revolve around a drawing room, but only in the way the eye is at the centre of a hurricane. The drama starts at a dinner party to celebrate the engagement of Ms. Sheila Birling [Eileen Moore] to Gerald Croft [Brian Worth]. Her “hard-headed businessman” father Mr. Arthur Birling [Arthur Young], mother Mrs. Sybil Birling [Olga Lindo] and feckless younger brother Eric Birling [Bryan Forbes] are also in attendance. However, when a policeman, Inspector Poole, is shown in, these evening pleasantries are exposed as sitting on a raft of lies and exploitation. The inspector is played by Alastair Sim in what is one of his most memorable roles and the determined Inspector slowly proves their collective guilt before a final supernatural twist in the tail.

Alastair Sim was a character actor best known for his role as Ebenezer Scrooge in the film ‘A Christmas Carol’ that he had played three years earlier, before this film. He was a very versatile actor who was happy in comedy roles too; also in 1954 he played both the role of the headmistress as well as her dodgy brother in the first of the St Trinians films. Here he is an august, inscrutable presence, keeping numerous secrets hidden beneath his hooded eyes, before making revelations at key moments.

Without giving too much away, the secrets that the Inspector Poole reveals and all that revolve around the way the family treats a young woman, Eva Smith, who has recently committed suicide. All of the party, man and woman, have treated her either thoughtlessly or even abominably. Each small story shines a light on a different aspect of the Edwardian British class system. This includes industrial relations, and remarkably for a play that was written in the prudish 1940s, sexual hypocrisy.

‘AN INSPECTOR CALLS’ is a socialist wolf in frock coated sheep’s clothing and a great bit of storytelling too. The various encounters with Eva Smith are shown in flashback, while they are merely narrated in the play, which broadens the action. The script is also very quotable, “It isn’t only Eva Smith, and it is all the other Eva Smiths.” Quite! Directed by Guy Hamilton who went onto make four James Bond films, this is a first class drama that is unlikely to be bettered in its latest incarnation.

Ultimately it is a great snapshot of a changing period in time in British history when many rich old people still believed that war wasn’t coming, as shown in the first scene and that worker’s didn’t deserve any rights; while the younger generation were breaking free from the older generation and demanding change. It is also a great example of British film making even if it is slight at 77 minutes and does have a slightly confusing ending which keeps you guessing the outcome?

However, whereas this air of restrictiveness could prove a distraction in other films, here it focuses the attention on the unfolding drama. The arrogance of the Birling family, with their acute awareness of their standing in the local community and constant fear of how any hint of scandal may destroy it, is vividly brought to life by Young as Arthur, the pompous head of the family and Olga Lindo as his aloof wife, Sybil. Equally sharp are Forbes and Eileen Moore as their children Eric and Sheila who, unlike their parents, show remorse when the error of their ways are made clear to them. It's Alastair Sim, however, who steals the show. His depiction of Inspector Poole – who may not be all he seems, and has a sinister otherworldliness which haunts the viewer as much as it does the characters, leading ‘AN INSPECTOR CALLS’ to linger long in the mind long after the film has finished.

Blu-ray Image Quality – The 1080p image quality  for ‘AN INSPECTOR CALLS’ is really excellent and the film is full of deeply monochrome blacks which stand up remarkable well, making this a real visual treat. Ted Scaife’s superb cinematography is not wasted one ounce here. Presented in its original aspect ratio of 1.37:1 and you get a brilliant 1080p encoded image. Generally speaking, depth and clarity are very pleasing. The majority of the close-ups, in particular, look very good. During the outdoor footage, shadow definition is also convincing. Contrast levels are stable, but there are areas of the film where minor inherited fluctuations are visible. Light grain is present throughout the entire film, but it is slightly toned down. There are no traces of problematic sharpening corrections and serious transition or stability issues to report. To sum it all up, STUDIOCANAL have done a stunning restoration of ‘An Inspector Calls’ that will please fans of the film and especially of the brilliant actor Alastair Sim. STUDIOCANAL have provided optional English SDH subtitles for the main feature. Playback Region B/2: This will not play on most Blu-ray players sold in North America, Central America, South America, Japan, North Korea, South Korea, Taiwan, Hong Kong and Southeast Asia. Learn more about Blu-ray region specifications

Blu-ray Audio Quality – There is only one standard audio track for this Blu-ray release and that is in the form of a 2.0 LPCM Mono Audio track. For the record, the sound is very crisp and clear, plus there are no sudden spikes or drops in dynamic activity. Rather predictably, however, dynamic intensity is quite limited. All the clicks, pops, crackle, and background hiss have been removed as best as possible and the dialogue is stable and exceptionally easy to follow.

Special Feature: Interview with Actress Jane Wenham [2014] [1080p] [1.78:1] [7:00] With this special feature it features a nice interview with the actress Jane Wenham who played the character Eva Smith in the film ‘AN INSPECTOR CALLS.’ In this new video interview, actress Jane Wenham (26 November 1927 – 15  November 2018), recalls her collaboration with director Guy Hamilton on ‘AN INSPECTOR CALLS’ and her interactions with the rest of the cast during the shooting of the film. Ms. Jane Wenham who passed away at the age of 90 years of age, brought a delightful stage presence to her work that ranged from Shakespeare to the musical “Salad Days” and even to pantomime.

Finally, I have to say that director Guy Hamilton's ‘AN INSPECTOR CALLS’ is one of the best entries in STUIOCANAL's Vintage Classics series. I was very pleasantly surprised. I have seen other adaptations of J.B. Priestley's play, but somehow missed this film. An Inspector Calls has been recently restored by STUIOCANAL and looks lovely on Blu-ray. Do not hesitate to add this release to your collections, as you will not regret it folks. Highly Recommended! 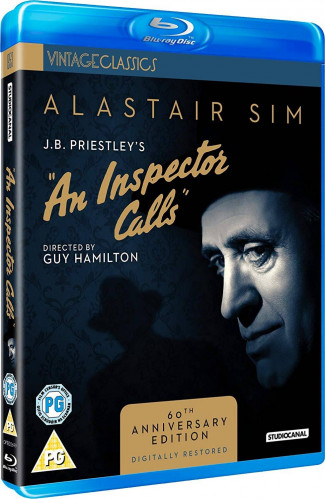 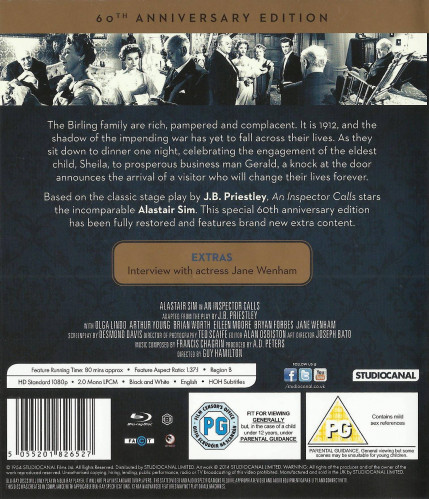