Given free rein in choreographing ‘ANCHORS AWEIGH,’ Gene Kelly was eager to do the unexpected. But what? "How about doing a dance with a cartoon?" collaborator and friend Stanley Donen asked. How about it indeed. Gene Kelly's live-action fancy footwork with animated Jerry (of Tom and Jerry cartoon) remains a milestone with this movie fantasy. Frank Sinatra and Kathryn Grayson also head line this wartime tale of two sailors on leave in Hollywood. Frank Sinatra's "I Fall in Love Too Easily," the exuberant Gene Kelly and Frank Sinatra "We Hate to Leave" and other highlights helped ‘ANCHORS AWEIGH’ weigh in with an Academy Award® for Best Scoring  of a Musical Picture, plus four more Oscar® nominations, including Best Picture and Actor for Gene Kelly.

FILM FACT No.2: The film ‘ANCHORS AWEIGH’ is remembered for the musical number in which Gene Kelly dances seamlessly with the animated Jerry Mouse (voiced by Sara Berner). Tom Cat appears briefly as a butler in the sequence supervised by William Hanna and Joseph Barbera. The animation was entirely undertaken by Kenneth Muse, Ray Patterson and Ed Barge. Originally, the producers wanted to use Mickey Mouse for this segment. Some sources claim Walt Disney initially agreed to loan out Mickey Mouse, but Roy Disney rejected the deal. According to Bob Thomas's book on Roy Disney, the studio was in debt after World War II and they were focusing on trying to release their own films out on time. According to Roy, they had no business making cartoons for other people. After Disney turned the offer down, Kelly went to Fred Quimby, the head of M-G-M's cartoon studio. Fred Quimby was also not interested, but Kelly persisted, reportedly showing up at Hanna and Barbera's office to press the case. The dance sequence required meticulous storyboarding; after Kelly's dance was filmed, the animators used rotoscoping to painstakingly match the animated character's movement to Gene Kelly. The film offers rare colour glimpses of the wartime M-G-M studio, including the Thalberg Building, the front gate, the backlot, the commissary, and one of the scoring stages, as well as an on-screen performance by real members of the M-G-M studio orchestra.

Andrew’s Blu-ray Review: ‘ANCHORS AWEIGH’ [1945], is quintessential a Forties song and dance extravaganza about two sailors on leave in Hollywood, remains the penultimate example of the M-G-M confectionery machine at its peak. The seamless team chemistry of Gene Kelly and Frank Sinatra proved so sensational that the duo would be paired in two subsequent and legendary Metro-Goldwyn-Mayer releases, ‘Take Me Out to the Ballgame’ [1949] and, most notably, ‘On the Town’ [1949]. Their reel camaraderie paralleled their real lifetime friendship, an enthusiasm evident in every frame they share together. For Frank Sinatra, a devout movie buff, co-starring at M-G-M was a dream come true and this picture, showing him as a girl-shy gob in love, firmly cemented him as a member of the studio's more-stars-than-there-are-in-Heaven club. Importantly, it was the singer's first appearance in Technicolor. Aside from the spectacular Technicolor, whose radiant bright hues turned Southern California into a kaleidoscopic paradise, ‘ANCHORS AWEIGH’ was expertly helmed by George Sidney, beginning his feature film tenure after apprenticing in the studios shorts department. Sinatra, never one to forget a key player in his career, heartily approved when George Sidney directed ‘Pal Joey’ in 1957.

This mammoth brilliant Hollywood musical is about the story of two sailors on leave in Hollywood. Brash Joseph Brady [Gene Kelly] has promised his shy pal Clarence Doolittle [Frank Sinatra] that he will introduce Clarence to all the glamorous movie starlets whom he allegedly knows so well. Also involved in the plot machinations is runaway orphan Donald Martin [Dean Stockwell]. Of course Gene Kelly was no slouch either nor was female lead Kathryn Grayson or the cute little urchin playing her kid brother, Dean Stockwell. Gene Kelly's imaginative dances, resulting in the masterful live action/animation set piece, wherein the star cuts a veritable rug with M-G-M's cartoon luminary Jerry the Mouse, is probably the most famous sequence in the picture, which is everyone’s favourite part of the film.

Indeed, Jerry the Mouse and Gene Kelly dance is totally unique novelty but it is probably the magnificent Jule Styne and Sammy Cahn songs including "What Makes the Sunset" and "I Begged Her" that the film's legions of fans take closest to heart. A top favourite is "I Fall in Love Too Easily," as sung by a lonely Frank Sinatra in the empty Hollywood Bowl, the ballad, in its elegant simplicity, remains one of the films musical's greatest moments.

Miss Kathryn Grayson sings several numbers really beautifully, be it said from the semi-classic "Jalousie" to "All Of a Sudden My Heart Sings." And Frank Sinatra does rather nicely and we'd be the first to say so if he did not by such slightly sticky numbers as "I Fall in Love Too Easily" and "What Makes the Sunset?"

ANCHORS AWEIGH (1906) (uncredited) (Music by Charles A. Zimmerman) [Played off-screen during the opening credits] [Played by a Navy Band conducted by José Iturbi]

Hungarian Rhapsody No. 2 (1847) (uncredited) (Music by Franz Liszt) [Played on pianos by José Iturbi and a group of piano students]

Blu-ray Image Quality – Warner Home Video has gone back to the drawing board for a brand new 1080p image harvest on this much beloved catalogue title. The results are mostly pleasing. ‘ANCHORS AWEIGH’ appears in the aspect ratio of 1.37:1 on this Blu-ray Disc. For its age, I think Warner Bros. have done a sterling work in producing this 1080p encoded image. Sharpness usually came across well. A little softness entered into some shots, mainly during interiors, but those instances didn’t create notable distractions and the majority of the film displayed very positively in my opinion. The Technicolor elements offered nice vibrate colours throughout the film. Blacks seemed dark and tight, and low-light shots offered good clarity and I felt very pleased with the image.

Blu-ray Audio Quality – The film's original mono track has been encoded as 1.0 DTS-HD Master Audio Mono. The source from Warner Home Video is in great shape for the era, and the musical numbers and vocal performances have remarkably good presence, even the big numbers featuring a huge military band or a dozen pianos. The dynamic range is somewhat limited, but the highs aren't harsh and the lows aren't too harsh. Both dialogue and lyrics are clearly rendered, including the cartoon voices. The only slightly negative aspect of this audio is at certain times you get a lot of hiss background noise, mainly when some of the songs are sung, but despite this, Warner Bros. have done a really excellant job.

Special Feature: Hanna & Barbera on the Making of “The Worry Song” [from M-G-M: ‘When the Lion Roars’] [1992] [480i] [1.37:1] [2:09] This very short feature tells us about the famous musical number where Gene Kelly dances seamlessly with the animated Jerry Mouse (voiced by Sara Berner) which the sequence was supervised by Joseph Barbera and William Hanna. The animation was entirely done by veterans Kenneth Muse, Ray Patterson and Ed Barge. We also hear that originally, the Producer Joe Pasternak with Gene Kelly wanted to use Mickey Mouse for this segment, but Walt Disney said, “Let me get this straight, you want Mickey Mouse to be in an M-G-M picture” and Joe Pasternak and Gene Kelly said “yes,” and Walt Disney said, “Mickey Mouse will never be used in an M-G-M picture” and that is how Jerry the mouse appears with Gene Kelly. But we also how the concept of the dance routine comes about as we get to hear Joseph Barbera and William Hanna explain in great detail how it was all planned and eventually filmed, I tell you it all sounded a very complicated intricate process for the time, whereas today it would all be done with CGI and computers. Contributors include: Joe Pasternak [Producer], Joseph Barbera [Directors of M-G-M Cartoons] and William Hanna [Directors of M-G-M Cartoons].

Special Feature: Football Thrills of 1944 [1945] [1080i] [1.37:1] [8:30] Metro-Goldwyn-Mayer presents A “Pete Smith Speciality” that is narrated and produced by Pete Smith. What you get to view is highlights of American Football in  1944. The teams competing we get to view are Tulsa vs. Georgia Tech; Ohio State vs. Indiana; Dartmouth vs. Penn; Notre Dame vs. Pitt; Notre Dame vs. Army; Ohio State vs. Great Lakes Training Station; Navy vs. Duke; Notre Dame vs. Illinois; Navy vs. Georgia State; Army vs. Duke; Navy vs. North Carolina Pre-Flight and Army vs. Navy. This has got to be the most boring extra I have ever seen in a very long time and if you are not at all a sports fan like me, then give this a wide berth, as you will not be at a loss not viewing it.

Special Feature: Vintage M-G-M Cartoon: Jerky Turkey [1945] [1080p] [1.37:1] [7:32] The Pilgrims land at Plymouth Rock and found a colony. A very large number of Pilgrims (some of them caricatures of Avery's animation crew) can be seen standing in line... for their cigarette rations. A Pilgrim goes hunting for a turkey for Thanksgiving dinner. The turkey outsmarts the pilgrim many times and eventually the two make up and decide to eat at "Joe's restaurant" which is being advertised by a bear, at the end the bear has eaten the two and reveals that he is Joe and the two complain inside the bear's stomach. Many of the gags revolve around life on the home front in the United States during WWII, rationing and the black market. The turkey is a caricature of the comedian Jimmy Durante. PLEASE NOTE: Before you get to view this Tex Avery Cartoon, you get a notice from Warner Bros. informing us that the cartoon you get to view is a product of its time. It depicts some ethnic and racial prejudices that were common place in American society. These depictions were wrong then and are wrong today. While the following does not represent Warner Bros.’ view of today’s society, this cartoon is being presented as it was originally created, because to do otherwise would be the same as claiming these prejudices never existed. Voice Cast: Tex Avery [Turkey Call] (uncredited), Wally Maher [Turkey] (uncredited) and Bill Thompson [Hunting Pilgrim] (uncredited). Director: Tex Avery. Producers: Fred Quimby and William Hanna (uncredited). Screenplay: Heck Allen (story). Composer: Scott Bradley.

Finally, ‘ANCHORS AWEIGH’ is a very solid M-G-M musical fare. The production numbers are very zingy; the songs are extremely listenable; and the glorious Technicolor treatment is totally outstanding. ‘ANCHORS AWEIGH’ is by far for me personally one of the best examples of the Hollywood musical genre that I really love and especially with its significant innovative use of spectacular animation and live action footage for 1945. If you are a fan of this film then I can assure you that you will not be disappointed and if you have never seen this film before, then you are in for a real treat. Very Highly Recommended! 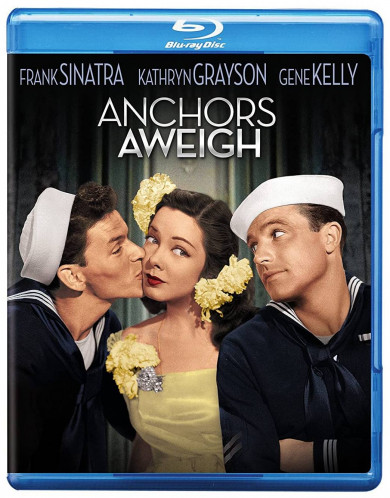 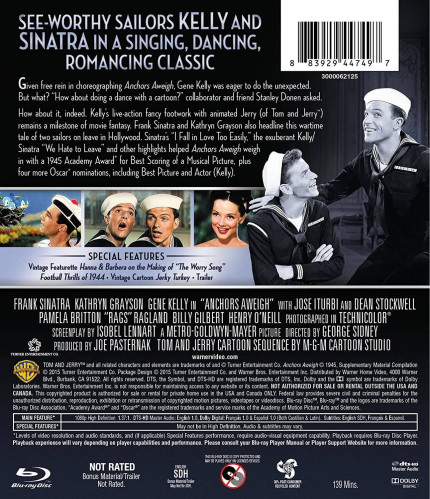