Ten people, strangers to each other, are invited to a lavish estate on an island. Through a recording, their mysterious host accuses each of his guests of murder and proceeds to exact justice. The tension mounts as, one by one; the number of people is reduced through the ingenious plotting of the unseen killer. Finally only two are left and each is uncertain as to whether or not the other is the murderer. A top cast of veteran performers, bring the intricate twist of the plot to life. One of the most thrilling novels and best adaptations of Agatha Christie's best-selling mystery novel “And Then There Were None,” climaxes at the spine tingling conclusion. Though its subject matter is dark, the screenplay injects considerable wit and humour into the proceedings, especially as you watch a thriller that has carved its own special niche in the realm of tales of suspense and mystery. Previously released by Twentieth Century Fox Film Corporation.

FILM FACT No.2: ‘AND THEN THERE WERE NONE’ was released in the United Kingdom as ‘Ten Little Indians,’ in keeping with a later United Kingdom title of Agatha Christie's novel. Film Location: Samuel Goldwyn Studios at 7200 Santa Monica Boulevard, West Hollywood, California, USA.

Andrew's Blu-ray Review: This Agatha Christie's murder story film ‘AND THEN THERE WERE NONE’ [aka 'Ten Little Indians'] [1945] is by this point so well-known and has been adapted, referenced and spoofed so many times on stage, screen, television, radio and even a video game, that its return to this Blu-ray disc in its best and most famous film version ever, and to have this 1945 edition directed by René Clair is very welcome indeed.

If Alfred Hitchcock is considered to be the Master of Suspense, then by all means should Agatha Christie be declared Mistress of the same arena? Her works of mystery have sparked countless stage and screen adaptations, one of the best-known being the 1945's 'AND THERE WERE NONE’ film. Boasting an impressive cast that includes the likes of Walter Huston and Barry Fitzgerald, this film, based on the Agatha Christie novel “Ten Little Indians,” has long since proven itself to be the veritable template for a big chunk of the murder mysteries to follow in the years after its release. At first it was considered cliché by genre standards, but by no means does that deter from the suspenseful magic that the picture manages to weave over the course of the running time.

The set-up is very simple. Ten seemingly random individuals have been brought together under rather unusual circumstances. The group, which ranges from a wise Judge Francis J. Quinncannon [Barry Fitzgerald] and an alcoholic doctor Dr. Edward G. Armstrong [Walter Huston] to a shy secretary Vera Claythorne [June Duprez] and a dashing explorer Philip Lombard [Louis Hayward], has been invited to a sprawling island mansion as the guests of host of “U. N. Owen.” It turns out that none of the ten knows or has even seen the elusive “U. N. Owen,” but he is certainly familiar with them, as a gramophone record he leaves is to be played condemning each of the ten for their past crimes of misdemeanours they may or may not have committed, as “U. N. Owen” signed his instructions to the obligatory butler Thomas Rogers [Richard Haydn]; they suddenly realise it stands for “unknown.” The guests decide to leave, but Thomas Rogers the obligatory butler informs them that the boat will not return until Monday, and it is only Friday.

The situation turns grimmer when one of the guests mysteriously dies, with another strange death following the next day. The survivors quickly determine that these deaths were no coincidences. They surmise that their homicidal host has taken it upon himself to punish them for their misdeeds, picking them off one by one in the style of the “Ten Little Indians” nursery rhyme. But as the guests start attempting to weed out “U. N. Mr. Owen,” they come to another shocking conclusion: the killer they're searching for may just be one of their own.

‘AND THEN THERE WERE NONE’ isn't an especially complex or convoluted mystery, but it doesn't need to be. It's just a simple “whodunit” that coasts along rather well on the effective, bare-bones nature of its story. You just have to know what happens next, and for the most part, director René Clair does a nifty job of always keeping the story moving in an intriguing direction. He does this by making the wise decision to cast suspicion on each and every one of the characters.

In retrospect, the one who turns out to be the mysterious Mr. Owen is a no-brainer, but watching the film for the first time, the viewer is in a true state of suspense, as little hints and red herrings are scattered throughout, endowing all of the characters with the potential to commit murder. With an island setting that proves to be as expansive as it is claustrophobic, 'AND THEN THERE WERE NONE' really knows how to keep one on your toes, cooking up an atmosphere that goes along perfectly with the story.

The few speed bumps encountered along the way aren't crippling, but the distractions they provide are definitely noticeable. As there tends to be with a lot of murder mysteries, there's quite a bit of down time in between killings. This leaves portions of the film in which the characters just wander around until the next addition to the body count furthers the plot.

There's some investigation involved, but a lot of the time, we get Judge Francis J. Quinncannon [Barry Fitzgerald] character serving as a one-man army, coming up with explanations left and right while the others sit around waiting to be knocked off. The pacing tends to get a little wobbly and repetitive as a result, but as I mentioned before, it's not enough to completely ruin the film as a whole. The varied selection of actors and characters make sure that the viewers are involved one way or another. The film's finest performances belongs to Dr. Edward G. Armstrong [Walter Huston] as the disgraced doctor and Thomas Rogers [Richard Haydn] as the obligatory butler, who, in one of the script's more darkly comedic moments, refuses to serve dinner after being accused of being the killer.

One problem with screen versions of the murder mystery genre is that it is too easy for characters to have their intentions uncovered prematurely due to the directing of the actors and their expressions. Unlike some of the many later adaptations, this version does a good job of maintaining suspense up until the final scene when the truth is revealed. René Clair keeps us guessing what will happen next, while offering limited foreshadowing. Suspicion is cast on all parties as the characters grapple with their predicament, and the cast does a fine job relaying their fear and anxiety without exposing the answer to the enigma. The cinematography utilises the location effectively, with constant reminders of their desolation adding to the atmosphere, and odd, deliberate camera angles heighten the tension. Like all Agatha Christie mysteries, the finale puts all the pieces together, and the ending here, while predictable to a point, is satisfying, if liberally adapted for the screen. While not exactly faithful to the novel, it is a good translation in tone. For an excellent, old fashioned whodunit, you cannot go wrong with this very fine Blu-ray release of the film 'AND THEN THERE WERE NONE.'

Blu-ray Image Quality – 'AND THEN THERE WERE NONE’ is presented on Blu-ray courtesy of VCI Entertainment with a 1080p transfer and the usual 1.37:1 aspect ratio of that period. In the years after its release, 'AND THEN THERE WERE NONE’ fell into the public domain, and it has been released onto DVD by various distributors. It hasn't looked pristine in a very long time, and this new release on Blu-ray from VCI Entertainment, is no exception. The sad news, since VCI Entertainment is touting this on its artwork as “Newly Restored.” It may be newly restored, but it certainly hasn't been restored to anything resembling immaculate condition. There is graininess, unsteadiness, and most of all a general softness to the image, which looks like it may have been sourced from a 16mm print. While not a terrible transfer, the hope created by the “newly restored” promise on the Blu-ray cover makes this a disappointing one. VCI Entertainment is generally a reliable company that puts out good versions of hard-to-see classics and public domain titles, so this is an anomaly for them. But all that being said, this version is still watchable, so this release is still recommended.

Blu-ray Audio Quality – 'AND THEN THERE WERE NONE’ is presented with a 2.0 LPCM Mono Audio track and sounds reasonably problem free, given realistic expectations with the age of the film. There is some very slight distortion evident in the music, but dialogue comes through nicely, albeit with a fair amount of hiss. There are a few pops that have not been completely eliminated, but overall everything is easy to hear, and is sadly not empowered with much dynamic range, which I suppose is all down the master negative.

Blu-ray Special Features and Extras: Sadly VCI Entertainment felt there was no need for any extras for this Blu-ray disc, which is a crying shame, as I am sure Twentieth Century Fox Film Corporation must have in their vault all manner of extras, like there must be loads of black-and-white photographs from scenes from the film and especially all the actors.

Finally, 'AND THEN THERE WERE NONE’ is a perfect gem of a classic Black-and-White film of its genre, but VCI Entertainment probably did their best, whatever elements it was able to scrape together, but their efforts are hampered by some odd decisions, notably making this release so very dark. Things aren't horrible here, but there is still is an abundance of grain, so whatever clean-up was done, was done with a naturally filmic look in mind, but my sense is someone is going to need to find a much better elements and then really meticulously restore them frame by frame in order for ‘AND THEN THERE WERE NONE’ to really pop out in high definition. Despite this being the only high definition Blu-ray copy available at this moment in time, I am really pleased to add this to my extensive Blu-ray Collection and if you are into good Murder Mystery type genre, then this is a definite must view this classic black-and-white film. Highly Recommended! 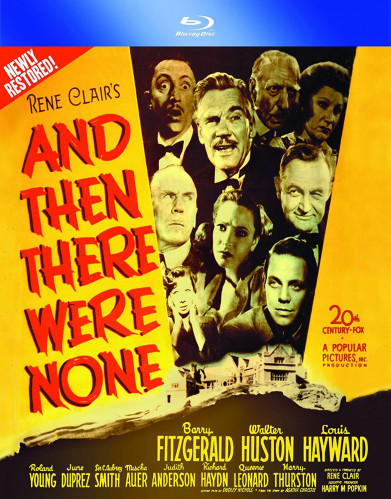 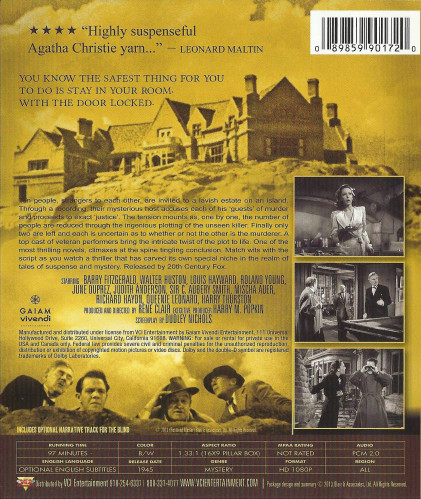