ANGELS & DEMONS [2009] [Theatrical and Extended Cut] [Blu-ray] [UK Release] Must See Film of the Year! A Devilish Delight! From The Author of The Da Vinci Code!

In Ron Howard's thrilling follow-up to ‘The Da Vinci Code,’ expert symbolist Robert Langdon [Tom Hanks] follows ancient clues on a heart-racing hunt through Rome to find the four Cardinals kidnapped by the deadly secret society, the Illuminati. With the Cardinals' lives on the line, and the Camerlengo Patrick McKenna [Ewan McGregor] desperate for help, Robert Langdon embarks on a nonstop, action-packed race through sealed crypts, dangerous catacombs, and the most secretive vault on Earth!

Andrew’s Blu-ray Review: ‘ANGELS & DEMONS’ [2009] takes place mainly in the Vatican, and is festooned with the rites and ornaments of Roman Catholicism, I might as well begin with a confession. I have not read the novel by Dan Brown on which this film and directed, like its predecessor, ‘The Da Vinci Code’ by Ron Howard is based. I have come to believe that to do so would be a sin against my faith, not in the Church of Rome but in the English language, a noble and beleaguered institution against which Mr. Dan Brown practices vile and unspeakable blasphemy.

And it was partly, perhaps, because I chose to remain innocent of the book that I was able to enjoy ‘ANGELS & DEMONS’ more than ‘The Da Vinci Code’ which opened almost exactly three years ago to an international critical hissy fit and global box office rapture. The novel “Angels & Demons” was published three years before “The Da Vinci Code.”

The only people likely to be offended by ‘ANGELS & DEMONS’ are those who persist in their adherence to the fading dogma that popular entertainment should earn its acclaim through excellence and originality. It is therefore not surprising that the public reaction so far has been notably calm. Theological hyperventilation has been minimal, and Columbia Pictures has not been accused of falsifying the history or corrupting the morals of Western civilisation.

Played by Tom Hanks in his high minimalist mode. Once again Tom Hanks is accompanied by a ravishing international film star, in this case the Israeli actress Ayelet Zurer that appeared in ‘Munich’ and ‘Vantage Point.’ She plays Vittoria Vetra, an Italian scientist, specialising in “bio entanglement physics,” whose role is to serve not as a romantic foil, but rather as his sidekick sleuth and fellow panellist in a high-velocity interdisciplinary seminar.

And as an exercise in extreme mass-market tourism ‘ANGELS & DEMONS’ gives pretty good value. Unable to shoot in the Vatican itself, so Ron Howard and his team have deftly blended actual Roman locations with Hollywood stage sets and CGI images to make a dreamy, ephemeral Eternal City.

The costume and production design, all those red cardinals’ robes swirling dervish like in the incense-tinted light, those sensuous Bernini sculptures and soundless library stacks, nearly steal the movie from the bland, dogged heroes. Luckily an international squad of potential villains and victims, you’ll figure out who is which soon enough, since Dan Brown tends to let the wiring show when he rigs his surprise twists, has already carried out the larceny.

The interesting thing about this film is its treatment of the Catholic Church. Many have criticised the film and labelled it as “anti-Catholic” but I feel that’s not a fair criticism. While the film is critical of many of the Catholic Church’s failures over the course of centuries, it does have a reverence for Catholicism’s place in the world and as a source of hope and comfort for hundreds of millions of people across the world. The struggle between faith and science is not something that is easily reconciled and it’s something that is still a source of conflict today.

Ron Howard is a skilled and talented director and is one of the few actors that have made the transition from actor to full-time director with commercial and critical success. Ron Howard took the criticisms of ‘The Da Vinci Code’ and made improvements in the pre-sequel to quicken the pace. Rumour has it that Ron Howard and Tom Hanks aren’t done with Robert Langdon and will be getting back together to adapt Dan Brown’s latest book Inferno in the coming years.

‘ANGELS & DEMONS’ is a great mix of tense action, religious intrigue, history, and conspiracy theories. It’s smartly written, even if it does have some inaccuracies. It’s also mostly independent of ‘The Da Vinci Code’ with only brief allusions to the other story so if you haven’t seen the first film you won’t feel lost watching the second. If you enjoy history it’s worth a watch.

Blu-ray Image Quality – ‘ANGELS & DEMONS’ is presented in a wonderful 1080p image and aspect ratio of 2.40:1 transfer that shows more detail and deeper colour with this Blu-ray. There is a much greater variety of colours, textures, people and environments on display with this film, and the HD transfer appropriately reveals a satisfying depth of detail in everything from a CGI representation of a super collider at work to a depiction of a Vatican Conclave of Cardinals trying to elect a new pope. The marriage of CGI to real locations is fairly seamless, except in the very few situations when it’s clear that nothing but CGI could depict the visual. Please Note: Playback Region B/2: This will not play on most Blu-ray players sold in North America, Central America, South America, Japan, North Korea, South Korea, Taiwan, Hong Kong and Southeast Asia. Learn more about Blu-ray region specifications.

Blu-ray Audio Quality – ‘ANGELS & DEMONS’ brings you a 5.1 DTS-HD Master Audio mix in English and French. The mix provides clear dialogue from the front channels and no mean feat given the wildly varying accents on aural display here from the cast, along with effective use of the surround channels for atmosphere and music. There is some satisfying use of directional effects in the surround channels, particularly one search sequence within a construction area. As with the first film, the subwoofer gets a pretty intense workout, particularly during the big action sequences, the big music moments, and during the obvious opportunities like the aforementioned super collider event, and the film’s climax.

Brand New Extended Version [2009] [1080p] [2.40:1] [140:00] The extended edition adds a mere eight minutes to the film's running time, and while much of the material is brief snippets of useless filler, there's substantially more gore during the violent encounters. To get a PG rating for the theatrical cut, many of the graphic shots had to be altered or eliminated, and they have been reinserted into the film here. The extended version definitely earns a 15 rating in the UK, and parents should be cautioned about potentially objectionable content.

Special Feature: Rome Was Not Built In A Day Part One [2009] [1080p] [1.78:1] [17:00] This feature addresses some basic areas, from production and an interview with the producer and the 2nd Unit director, through to costume design, production design, visual effects, editorial, music, and the conversion of a Hollywood Park lot to a large exterior square.

Special Feature: Rome Was Not Built In A Day Part Two [2009] [1080p] [1.78:1] [17:00] This is another brief collection of interview snippets and behind the scenes footage. Here, we see materials about shooting on location in Rome, building the film’s sets, making costumes for hundreds of people in the depiction of Vatican City, the work of DP Salvatore Totino, and a look at the filming of a fire stunt sequence. I suppose you could put this together with the earlier Rome Was Not Built in a Day featurette and have a more complete view of the film. It’s puzzling why the two features were split apart in this fashion.

Special Feature: Angels & Demons: The Full Story [2009] [1080p] [1.78:1] [10:00] This feature that discusses the casting of the film, and includes interviews with almost every major player in the film. “THERE ARE MAJOR SPOILERS IN THIS FEATURE.” There’s not a great depth of material here but mostly it’s just Ron Howard describing what a great actor is playing the part, and then the actor talking about what a great experience they had on the film.

Special Feature: CineChat: Send on-screen instant messages to your friends across the world while you watch the film together! An internet connection is required.

Special Feature: Movie IQ: While watching the film, this Blu-ray function allows you to bring up an on-screen trivia box, with information about each scene, from the cast to the musical score cue to the relevant part of Dan Brown’s book. There’s some interesting trivia here, but for the most part, I found this function to be limited in entertainment or informational value.

Finally, ‘ANGELS & DEMONS’ is an equally successful adventure romp to the earlier film ‘The Da Vinci Code.’ It doesn’t have a lot of substance to it, and the mystery does not hold up to much scrutiny, but it’s very well crafted and it’s beautiful to watch. Fans of Ron Howard and Tom Hanks will have a great time here. I expect that fans of Dan Brown’s book may or may not completely embrace this adaptation and there’s always an argument, but I had a great time with the film. I didn’t find a lot of depth to the special features here either, but there’s certainly enough material to keep fans occupied for an additional couple of hours past the viewing of the film, and some interesting material along the way. I would recommend a rental before purchasing, but this is still a fine HD transfer and a fun film to watch. Highly Recommended! 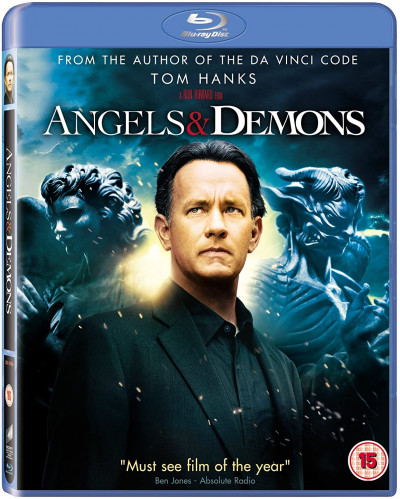 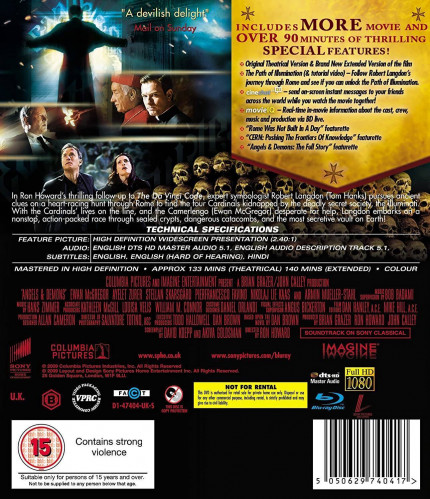