In the summer of 1940, young volunteer reservist John Gregson is forced to crash his Hurricane on the RAF fighter station runway in order to avoid a collision with another plane. Injured in the accident, he incurs the wrath of Squadron leader Group Captain 'Tiger' Small [Jack Hawkins], who grounds Pilot Officer T.B. Baird [John Gregson], transferring him to the operations centre until he recovers. Baird is desperate to get airborne, but Group Captain 'Tiger' Small refuses his protests. However, when risk of a bombing attack threatens the airfield, Pilot Officer T.B. Baird takes his chance to be reinstated and returns to the skies.

Painstaking restored to its former glory, ‘ANGELS ON FIVE’ is amongst the very best Battle of Britain war epics. Based on director George More O'Ferrall's own WWII experience at Fighter Command HQ, it offers a slice-of-life depiction of aerial combat.

FILM FACT No.2: "Angels One Five" refers to RAF radio procedure words, from the Second World War, indicating the altitude of a radar contact is 15,000 feet. The film was the first British post-war production to deal with the Battle of Britain. ‘ANGELS ON FIVE’ featured three Hawker Hurricane fighter aircraft: Hurricane Mk. Is (p2617 and L1592) on loan from the RAF and Hurricane Mk. IIc (LF363) loaned by Hawker Aircraft. An additional five Hurricane Mk. IIc aircraft (N ° 544, 554, 600, 601, 624) came from the Portuguese Air Force. The aircraft were all painted in the colours of No. 56 Squadron RAF and were based at RAF Kenley during the filming. Ronald Adam who plays the part of a Group Controller was the Fighter Group Controller at RAF Hornchurch during the Battle of Britain. Squadron Leader Adam was a veteran of both the First and Second World War. The opening titles feature the Royal Air Force March Past.

Andrew’s Blu-ray Review: The 1952 film ‘ANGELS ONE FIVE’ was one of the first great classic war films that emerged from Britain. This wartime drama tells the story of the Battle of Britain during the Second World War from the viewpoint of the men and women stationed at a Royal Air Force base and set in the summer of 1940, it focuses on a young Scots volunteer reservist Pilot Officer T.B. Baird, played by John Gregson. British films of the Second World War at the time were the only films that dealt with war in Britain in the years immediately after the war and largely dealt with the social problems or about servicemen adjusting to civvies life. During the Second World War itself there had been some truly classic and great war films such as ‘In Which We Serve’ [1942], ‘The Way Ahead’ [1944] and ‘The Way to the Stars’ [1945] and all of which dealt with each of the armed services which included the navy, army and Royal Air Force respectively. Praised for its documentary style, ‘ANGELS ONE FIVE’ captures the bravery of the Battle of Britain pilots and its documentary-style aesthetic and its depiction of people on the frontline of the Second World War in and below England's skies.

The film begins with Pilot Officer T.B. Baird [John Gregson] landing his Hawker Hurricane on its nose in a squadron leader's garden at the end of the base runway. Pilot Officer TB Baird is initially grounded for the damage caused and sent to work in the operations centre while recovering from neck strain picked up in the incident. Jack Hawkins was a massive big British box office draw in the early 1950s, and stars as Group Captain "Tiger" Small who grounds Pilot Officer T.B. Baird until his neck recovers.

Days later the airfield faces a German bombing attack and all planes are scrambled to avoid being destroyed, giving Pilot Officer T.B. Baird his chance to get airborne again. While flying, he shoots down an enemy bomber but the triumph is short-lived as he lands himself in hot water by setting his radio to transmit non-stop and does not allow the returning Hurricane fighter planes from being diverted to an undamaged airfield. Grounded again, Pilot Officer T.B. Baird sits out various missions, itching to fly again. But he finally gets reinstated and airborne for what turns out to be his final mission. Michael Denison as squadron leader Peter Moon and Dulcie Gray as wife Nadine Clinton co-star in the film. Michael Denison and Dulcie Gray were married to each other off screen.

Shot largely on location at RAF Kenley and at the real Battle of Britain nerve centre at RAF Uxbridge, and ‘ANGELS ONE FIVE’ celebrates British wartime values of understated heroism and pragmatism. Indeed, and it is a film in which the famous stiff-upper-lip in the face of violence, despair and fear is written large on the big screen. Former RAF officers John Gossage and Derek Twist produced the film, which was made by Glasgow-based Templar Film Studios and the Associated British Picture Corporation at Elstree Studios in Hertfordshire. Made with full cooperation from the Royal Air Force, ‘ANGELS ONE FIVE’ is an action-packed human drama that stands as a reminder of one of Britain's greatest feats of defiance and bravery during the Second World War. ‘ANGELS ONE FIVE’ manages to find beauty and dignity in conflict with the squadron ducking and diving like a series of synchronised swimmers; who are heroes amidst the clouds and while we are never forgetting the debt we gave to these Royal Airforce pilots that “owed by so many to so few.”

Director George More O'Ferrall was a pioneer of television programme making. His burgeoning theatre and TV career was interrupted by military service in the Second World War. After the war and with a second stint at the BBC, the Royal Television Society awarded George More O'Ferrall its first Gold Medal and eventually turned to feature films and his debut feature film was ‘ANGELS ONE FIVE.’ The title of the film, which draws heavily on George More O'Ferrall’s own war experience, refers to the Royal Air Force code used by pilots and ground controllers, with one five meaning 15,000 feet.

SO DEEP IS THE NIGHT (uncredited) (Music by Frédéric Chopin)

Blu-ray Image Quality – STUDIOCANAL once again brings you this stunning and brilliant Blu-ray disc that has a very crisp sharp 1080p encoded black-and-white image, with an equally impressive 1.37:1 aspect ratio that is spot on. With a combination of stock footage, location shoots and the more conventional on set elements where ‘ANGELS ONE FIVE’ has a fair mix of shooting techniques to contend with and the 1080p HD presentation really nails it. There's a minimal sense of grain, the odd flicker and a vague sense of damage but generally speaking this is a fantastic restoration that had had an in-depth clean-up has provided the film with a fresh new home. The well-lit interior shots hold up the best with exterior shots looking a little more washed out under bright sunlight and this presentation provides a strong black-and-white experience that the celebrates the film and indeed the real world events it's based on very well. Please Note: Playback Region B/2: This will not play on most Blu-ray players sold in North America, Central America, South America, Japan, North Korea, South Korea, Taiwan, Hong Kong and Southeast Asia. Learn more about Blu-ray region specifications.

Blu-ray Audio Quality – STUDIOCANAL once again brings you this stunning and brilliant Blu-ray disc that has a stand-alone 2.0 LPCM Mono Audio, but the special feature is presented in 2.0 LPCM Stereo Audio and the mono audio experience is of course small and central but it's clean and clear and free of hiss. Fighter plane engines rumble nicely, exterior scenes hold a little bit of natural ambience and bigger moments feel impactful even if they don't hammer home like a modern production. Of course this is the original older and much simpler track for 1952, where recording techniques were not so sophisticated as with more modern film, but despite this, the limitations are the only thing holding this track back because technically it is fantastic given the 1952 film's age.

Special Feature: Max Arthur on the Battle of Britain [2015] [1080p] [1.78:1] [12:26] Max Arthur is the author of “Last of the Few” and gives a brief overview of the lead into The Battle of Britain and its various elements. With the German advances through Northern Europe, which lead to the British and French advances onto the beaches of Dunkirk, where they had over a third of a million men and 50,000 French Men together on the Dunkirk beaches, who were totally exhausted, and somehow had the logistic know how to get the men off the beaches of Dunkirk, while the German forces were getting ever closer to them. So Winston Churchill put out a message on the radio asking for all small crafts to go over to Dunkirk and rescue all the stranded soldiers on the beaches, and with the British Bulldog Spirit, hundreds of small crafts were able to rescue everyone from the Dunkirk beaches. Another great success was the Dutch Royal Airforce who helped to shorten the war even more with even greater success in defeating well over 200 enemy aircraft. As time went by the British Royal Airforce were gaining more ground and especially with more raids over certain parts of Europe which eventually helped to win over adversity and the boost the morale of the British people and the also the whole of the United Kingdom. But what finally clinched in helping the British keep up their spirits in their hour of need, was the very prophetic words from Winston Churchill to the whole nation with his famous speech on the radio, where he says, “Never in the field of human conflict was so much owed by so many to so few.”

Special Feature: Restoration Comparison [2015] [1080p] [1.37:1] [1:48] Here you get to see a Restoration Preview of highlights of the 1952 film ‘ANGELS ONE FIVE’ with plenty of scenes showing you how the visuals have been restored. From damage to general sharpness a great deal has been enhanced to give a brilliant great image results. The different restoration scenes you get to view are Stabilisation of the print; the deletion of the Changeover Dot on the print; the Tape Join Removal and the Optical Fade Repair. This was all carried out by the Pinewood Studios organisation.

Theatrical Trailer [1952] [408i] [1.37:1] [2:47] This is the Original Theatrical Trailer for the film ‘ANGELS ONE FIVE.’ Despite the slightly poor quality of the print, it is still a great presentation of the film.

Finally, ‘ANGELS ONE FIVE’ follows those in control of the fighter pilots and the events around their missions. This approach gives the film a chance to play with characters rather than spectacle and that presents a strong human view of these world changing events. The beautifully shot images of the fighter planes are again quite laid back and certainly only hint at the intensity these aerial battles must have held bit there's quite a strong sense of realism to that and even with the aged effects it works. The Blu-ray disc itself looks and sounds great but sadly with minimal extras, but despite this, this is still a great classic Second World War film and again the images are stunning, which will help you to enjoy this 1952 film. Highly Recommended! 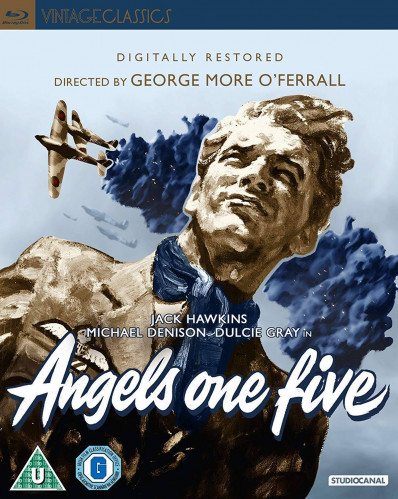 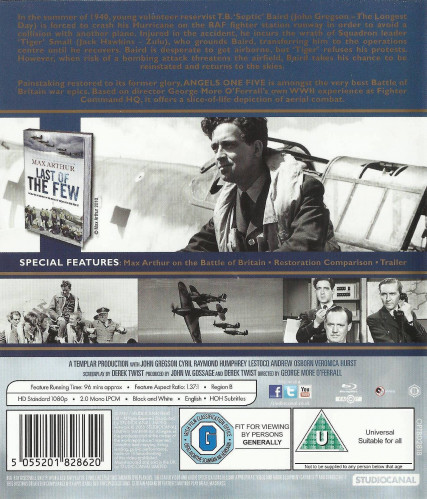