The film is set in Africa's Okavango Delta, and the main characters are a meerkat named Billy [James Corden] and a lion named Socrates [Stephen Fry]. The annual flood has failed to arrive in the Delta, water has become scarce and the native animals fiercely fight over it. Billy and Socrates set out to find more water, and during their quest they meet a rag-tag group of animals from across the world: a polar bear named Sushi [Bella Hudson], a kangaroo named Toby [Jason Donovan], a Tasmanian devil named Smiley [Pete Zarustica[, two Galápagos tortoises named Winifred [Vanessa Redgrave] and Winston [Jim Broadbent], and a chimpanzee named Toto [Jason Griffith], all of whom have had their lives ruined by humans in some way and have travelled to Africa. A German Constantin Film made CGI animated children's feature. It is based on the 1949 book of the same name by Erich Kästner.

Andrew’s Blu-ray Review: In the animated film ‘ANIMALS UNITED’ [2010] there are two protagonists in this animated film are a glib meerkat named Billy [James Corden] and a disenchanted lion named Socrates [Stephen Fry], who decides to go on a quest to discover why the river in their habitat has unexpectedly dried up. Along the way, they meet other animals whose homes have been destroyed by man’s inconsiderate ways. Their journey brings them to a dam which has been constructed to supply energy for a luxury resort. They must then come up with a plan to break the dam to get water flowing back into the delta again.

You aren’t the only one who noticed something strange with the characters’ mouth movements. The lip synching seems slightly out of place, only because this is an original German production with an original German cast of unfamiliar names. Here, we have most of brilliant British actors that include James Corden as the talkative meerkat, Stephen Fry channelling a tender and gentle touch to the disillusioned lion, as well as veterans Jim Broadbent and Vanessa Redgrave lending weight to the film as a pair of loving Galápagos tortoises.

It is inevitable that people will compare this animation film with more well-known animations like the Disney ‘The Lion King’ [1994] where Timon the meerkat and Simba the lion in that production were best friends too? Also in the ‘Madagascar’ [2005] weren’t the motley crew of animals in that DreamWorks hit from Africa as well? This imaginative animation film directed by Reinhard Klooss and Holger Tappe has done a very inventive job so far seen. Its 3D effects are totally brilliant at best, and the animal characters leave a warm lasting impression, while the computer generated effects in scenes involving massive numbers of rhinoceroses and buffalos are awesome. And But the animation film still deserves some brilliant credit and especially if you’ve got any heart for saving this planet we call home.

Based on a children’s storybook “The Animals’ Conference” [1945], this animation film was first visualised in 1969 by Curt Linda. Some 40 years later, the satire in which the world’s animals unite to successfully force humans to disarm and make peace with each other may be slightly diluted, no thanks to today’s need to produce movies which are simple and digestible, but the 93 minute animation film is so upfront with its modern environmental message that you can’t help but recommend, especially young children to watch it regular, especially in schools, to hit home the message of the danger if humans are allowed to pollute and ravage this planet of ours.

It may seem ridiculously unbelievable at first, but the animation film’s highlight has to be the rather surrealistic finale where animals from all over the world march onto the streets of New York to sound out that the animal kingdom is under threat from mankind and sends a serious message that us humans cannot ignore. Yes, despite the fact that it is not an animated feature film from Hollywood’s honchos like PIXAR or DreamWorks, it still looks stunning. Call this reviewer soft hearted, but how can people criticise an animation film that promotes environmental issues and sends a strong message about man’s destruction of animal habitats and the elimination of wildlife in general, for short financial gain?

3D Blu-ray Image Quality – Although ‘ANIMALS UNITED’ had a relatively modest budget, but reportedly somewhere between $40 and $50 million. Computer animation has progressed to the point where a lot of value can be created for that amount, if the talent is there. Each film's frames may not be as jam-packed with detail, like the best of PIXAR's creations, but the creatures are sophisticated in their conception and detailed in their realisation, and the 1080p encoded Blu-ray image reproduces all the fine renderings of texture in such demanding areas as fur, moisture, gravel and dirt. Colours are appropriately saturated, blacks are black and the panther in the Valley of Death is especially well-done, and there is no video or other noise to interfere with your viewing pleasure. As with all such digital animation, the Blu-ray was presumably sourced from digital files, thereby ensuring that the end product matches what the animators created. In Europe, ‘ANIMALS UNITED’ was released in cinemas in 3D, and many sequences would obviously benefit from the 3D image rendering. However, ARC Entertainment in North America has not announced any plans to release a 3D version. As you know you have two Blu-ray discs, with different 3D versions and the second Blu-ray disc has to be viewed with those ghastly Anaglyph 3D Glasses that has one red filter and one blue filter, and is supposed to “trick” the brain into seeing a 3D image, well do not consider or even contemplate viewing the second Blu-ray disc, as the 3D image experience is a total disaster and is also a totally ghastly viewing experience and I have no idea why Constantin Film and Entertainment in Video thought this was a good idea, as the Anaglyph 3D Glasses viewing experience went the way of the dinosaurs, thank goodness. Please Note: Playback Region B/2: This will not play on most Blu-ray players sold in North America, Central America, South America, Japan, North Korea, South Korea, Taiwan, Hong Kong and Southeast Asia. Learn more about Blu-ray region specifications.

3D Blu-ray Audio Quality – The 5.1 DTS-HD Master Audio surround track fully utilises all of the five channels to immerse the viewer in the film's experience. Discrete effects are plentiful e.g., beer cans tossed over your shoulder, as are pans and airplane flying, and all-around activities, like stampedes and showdowns between the rhinos and the water buffalos. Bass extension is significant and substantial, because the ground trembles for several reasons, at a number of points in the film. The numerous voice performances, with their wide variety of accents and intonations, are well-reproduced and generally confined to the front centre. The underscoring by the prolific David Newman is spread across the soundstage spectrum and blended unobtrusively into the background. This may not be the subtlest of soundtracks, but it's effective and a totally professional audio experience.

Finally, is ‘ANIMALS UNITED’ a great animated film? I think PIXAR and DreamWorks Animation do not need to start worrying just yet. But there is undeniable craftsmanship behind it, the kind that only improves with subsequent ventures, and next time the subject matter may not be as difficult to sell in the North American market. That the film's pro-animal slant would set off ideological trip wires and can be seen with user comments via either Amazon or IMDb. I personally enjoyed it precisely because it played like something that would never have survived a journey through the U.S.A. studio marketing, which almost always aims for blandness and constantly informing us all the time what you a viewing. Children, of course, do not care either way. But most importantly, I thought it was a totally brilliant 3D animated film and I just do not know why there have been so much negative comments about this animated film, these people should get a life and not be so up their own pompous petard? Highly Recommended! 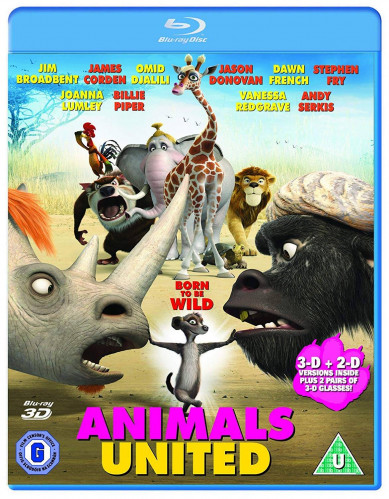 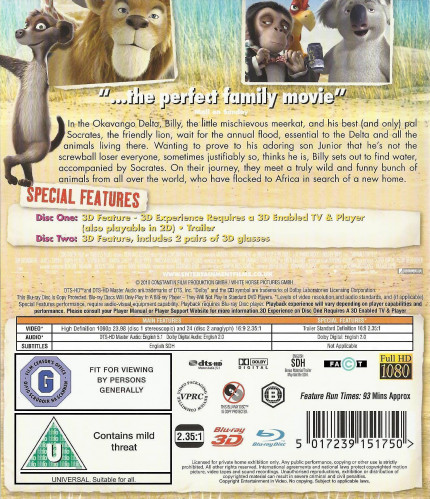