Richard Dreyfuss, Emilio Estevez and Rosie O'Donnell light up the screen in the action-packed hit, 'ANOTHER STAKEOUT.'  Once again, Seattle detectives Detective Chris Lecce [Richard Dreyfuss] and and Detective Bill Reimers [Emilio Estevez] are teaming up on a stakeout, but this time they're bringing along a headstrong female partner, Gina Garrett [Rosie O'Donnell], and her mischievous dog, Archie. Together, they're posing as the perfect family and it looks like these unlikely housemates might just catch their suspect...if they don't kill each other first. Twice the fun of the original 'Stakeout' and this star-studded action comedy will have you howling with laughter.

Andrew's Blu-ray Review: Older but not especially wiser, Detective Chris Lecce [Richard Dreyfuss] and Detective Bill Reimers [Emilio Estevez] are back to do it again in this amiably undemanding sequel to the 1987 hit, 'Stakeout.' Working as an undercover police detail in Seattle, Detective Chris Lecce and Detective Bill Reimers are abruptly pressed back into stakeout service when the prime government witness in a mob case disappears after a fiery attempt on her life in a Las Vegas safe house. The witness, Lu Delano [Cathy Moriarty] is thought to be hiding out with the O'Hara’s [Marcia Strassman and Dennis Farina] on scenic Bainbridge Island, and the assignment to watch the O'Hara’s house for signs of Lu Delano is straightforward enough until the duo learn they are to be supervised by federal prosecutor Gina Garrett [Rosie O'Donnell].

John Badham may never make another film as big as 'Saturday Night Fever' or his earlier telemovies. But when it comes to putting a talented cast together and through their paces, he has few peers in mainstream film making. 'Another Stakeout' requisite action sequences are exciting and help compensate for the less than tight plotting of scenarios Jim Kouf's script. The climax, in particular, depends upon Lu Delano's inability to recognise either Lecce or Reimer’s as cops despite having had to wrestle with both of them the night before. It also depends upon Lu Delano's insistence on bringing her entire federal entourage to the O'Hara’s front door after earlier taking pains to conceal their role in helping her elude the mob and the feds. After all that, the O'Hara’s inexplicably aren't even home, presumably because their presence would only complicate the climax.

Richard Dreyfuss and Emilio Estevez tackle their roles like the seasoned pros they are, and while neither Jim Kouf nor John Badham gives them much room to breathe, their buddy bonding never becomes grating. Madeleine Stowe spends most of the film standing around and talking on the phone to Richard Dreyfuss, perhaps because her jeans are so tight that to sit down would be to risk catastrophe. Richard Dreyfuss scores laughs with a spoof on his famed pantyhose rant from 'The Goodbye Girl' and Rosie O'Donnell is consistently the funniest of the trio (thanks to her own flawless comic timing and to her good luck in having some of the film's choicest bits), but Dennis Farina gets the film's single biggest laugh as he shovels down an ice cream sandwich in record time so he and his wife can escape dinner-from-hell with the cops, whose farcical efforts to maintain their cover make them appear an offshoot of the Manson family. Exhausted though the action-cop-buddy-comedy genre is, 'Another Stakeout' manages to be fairly entertaining.

COME ON GET HAPPY (Written by Wes Farrell and Danny Janssen)

Blu-ray Image Quality – ‘ANOTHER STAKEOUT' features a decent 1080p high definition transfer. Though some inconsistencies include regular edge enhancement; occasional background noise; and what is sometimes a scrubbed, flat appearance; the image is otherwise fairly strong, albeit hampered by its two primary problems. Detailing is quite strong and the image is rather sharp, though a few scenes do go a little soft and several shots showcase downright smeary details, particularly around the edges of the frame. Colours are nicely revealed, maybe a bit on the dim side in a few places but brighter hues and particularly the red Mercedes convertible that plays prominently in the film are handled without a hitch. The image is practically free of pops, scratches, and other unwanted debris. This isn't the best-looking image out there, but the Mill Creek Entertainment transfer is very watchable.

Blu-ray Audio Quality – ' ANOTHER STAKEOUT’ arrives on Blu-ray with a stout 2.0 DTS-HD Master Audio soundtrack. Though it's without much in the way of flair, the track delivers smooth, spacious music and a surprisingly honest low end. It's not abundantly rich, clear, or satisfying, but it is heads and shoulders above some of the other recent Mill Creek Entertainment two-channel releases. The soundtrack could use a bit more energy in places; dialogue is sometimes a bit shallow and explosions could stand a touch more heft, but most action-oriented sound effects, especially a chair crashing down a flight of steps, a barrage of gunfire that dots the final minutes of the film are pleasantly handled, featuring a fair bit of strength and halfway decent clarity. Overall, the track manages to impress with the greater spacing, power, and clarity than previous Mill Creek Entertainment Blu-ray releases.

Finally, ‘ANOTHER STAKEOUT' is a really good film. The critics have said that the film is nothing exceptional or memorable, but I personally found it incredibly watchable and infinitely entertaining, and it's a perfect representation of the kind of films John Badham tends to makes. A great cast and even better interplay elevates the film another couple of notches. ‘ANOTHER STAKEOUT' is a tough act to beat for a breezy and fun Saturday afternoon sort of Action/Comedy film. Mill Creek Entertainment's Blu-ray is technically, not at all bad. Relatively strong image and audio don't cancel out the complete absence of extras, but the low price and quality of this Blu-ray is worth purchasing. But sadly I do not understand why the previous film 'Stakeout' is not going to be released onto the Blu-ray format, as it was a totally brilliant and very funny film and definitely a good companion to this Blu-ray disc. Highly Recommended! 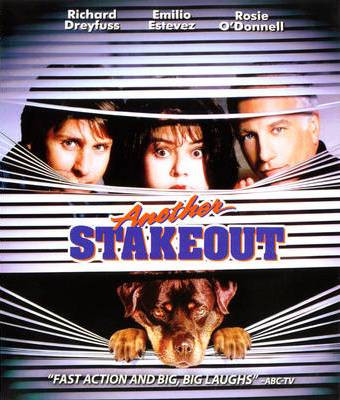 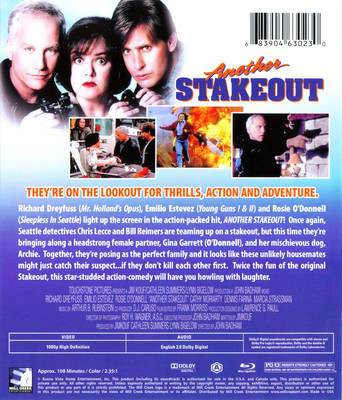