Get swept away on a magical carpet ride! Prepare for every wish to be answered in the dazzling film spectacular ‘ARABIAN NIGHTS.’ See the passionate romance, lavish riches and exotic splendour of this classic fable that was “beautifully mounted in Technicolor” [quote by Leonard Maltin] and is now magically brought to life in High Definition. Jon Hall [‘Ali Baba and the Forty Thieves’], Maria Montez [‘Cobra Woman’] and Sabu [‘The Jungle Book’] star in this lush, epic story of two half-brothers who battle each other for the power of the throne and the love of a sensual, gorgeous dancing girl. Directed by John Rawlins [‘Sudan’] and co-starring Leif Erickson [‘The Lady Gambles’], Billy Gilbert [‘The Great Dictator’], Shemp Howard [‘Pittsburgh’] and Thomas Gomez [‘Force of Evil’]. This thrilling adventure, the first of six films starring Maria Montez and Jon Hall, was nominated for four Academy Awards: Best Cinematography [Technicolor], Best Art Direction-Interior Decoration [Technicolor], Best Sound and Best Music Score.

FILM FACT No.2: Walter Wanger had just joined Universal Pictures for whom he had made ‘Eagle Squadron.’ Looking for a follow up he noted the box office success of ‘The Thief of Bagdad’ which starred Sabu, who was under contract to Universal Pictures. The studio announced they would make the film on 24th March, 1942. Maria Montez, Jon Hall and Sabu were always meant to star. John Rawlins was assigned to direct and filming started in June 1942. Even before filming began Universal Pictures announced the trio of leads would appear in a follow up ‘Cobra Woman.’ Shortly after that the studio said they would appear in another film ‘White Savage.’ The film was the first shot in Technicolor on the Universal Pictures lot in 12 years. Parts of the film were shot in the Coral Pink Sand Dunes State Park in Utah.

Andrew’s Blu-ray Review: ‘ARABIAN NIGHTS’ [1942] is a glorious adventure film featuring Sabu, Jon Hall and María Montez who would later star together again in the film ‘Cobra Woman.’ ‘ARABIAN NIGHTS’ is the first of six similar films which paired Jon Hall and Maria Montez. This picture is noted for being the first film Universal Pictures used the three-strip Technicolor film process.

‘ARABIAN NIGHTS’ was the first screen teaming of Jon Hall and Maria Montez as she plays the enchanting Scheherazade and the Haroun Al-Raschid the legendary medieval Caliph of Bagdad. Jon Hall is in a bind, he's the victim of a palace coup involving half-brother Leif Erickson and the Wazir Edgar Barrier.

In ‘ARABIAN NIGHTS’ we find Haroun-Al-Raschid [Jon Hall], and his half-brother Kamar [Leif Erickson], battle each other for the power of the throne in Baghdad and the love of a sensual, gorgeous dancing girl, Sherazade [Maria Montez], who is part of a circus act owned by Ahmad [Billy Gilbert]. At first Sherazade does admit that she would rather have power than love but as the film progresses, she has a change of heart.  In addition to Sherazade, the circus includes Sinbad the Sailor [Shemp Howard] and Aladdin [John Qualan]. Because Haroun-Al-Raschid was attacked by Kamar and his followers for which he was outnumbered, forcing him to run and hide. While hiding away from Kamar’s forces he is discovered by a free-spirited acrobat Ali Ben Ali [Sabu]. Haroun-Al-Raschid, Ali Ben Ali, and Ahmad join forces to stop Kamar from his reign of terror over Baghdad and also to win the heart of Sherzade.

‘ARABIAN NIGHTS’ is also noteworthy in the career of co-star, Jon Hall – the broad-shouldered hunk du jour who had dazzled audiences with his raw and muscular sex appeal. Like Sabu, Jon Hall’s presence in the films squarely rested on his physical appeal – in Jon Hall’s case, that of the hunky slab of beefcake whose barrel-chest and rippling arms could barely be contained in his costumes.

John Hall was born in Fresno, California, but raised by a Swiss father in Tahiti; and John Hall received a formal education in preparation for a career in diplomatic service. Alas, it was not to be; John Hall, bitten by the acting bug, trying his hand at the movies, first, using his real name – Charles Locher – for Monogram Pictures, then, as a contract player at 20th Century-Fox. Unsuccessful, John Hall became a freelancer, changing his professional name to Lloyd Crane, and finally, to his film star name Jon Hall.

‘ARABIAN NIGHTS’ is a wonderful fantasy film that has a lot of action throughout. I decided to watch it a couple of times in the past week because it was that entertaining. I was amazed how much I enjoyed this fantasy film; it is a really fun adventure ride from start to finish.  The film has a great cast, in addition to the three leads Jon Hall, Sabu and Montez, the film also has several name actors including Turhan Bey and Shemp Howard. We also have Thomas Gomez and William ‘Wee Willie’ Davis is also part of the superb veteran cast, and the legendary comedic actor Billy Gilbert.

For those not familiar with Billy Gilbert, he was an actor and comedian who appeared in over 200 films including several Laurel and Hardy classic short films. Among them are ‘The Music Box,’ ‘The Chimp,’ ‘Block-Heads’ and ‘County Hospital.’ Other choice films under his resume include ‘Snow White and the Seven Dwarfs,’ ‘One Hundred Men and A Girl,’ ‘Destry Rides Again’ and ‘His Girl Friday.’

Howard Greene, Milton R. Krasne and William V. Skall were the men responsible for the wonderful cinematography in the film, capturing some gorgeous scenery. Frank Skinner provided the outstanding triumphant soundtrack for this classic which will keep you on the edge of your seat.

‘ARABIAN NIGHTS’ is one of the best early Technicolor efforts out of Hollywood and it really shows. It is great fun with a little something for everyone. The Blu-ray is an excellent transfer and it is a simple action film with good caliphs and bad caliphs. There's the gorgeous Maria Montez and the costuming will simply amaze you. This film can be watched by everyone except small children as it has a couple of killings – non graphic and 1 torture scene – also non graphic, but despite this it is a really good film fantasy to enjoy. It is still a sumptuous looking film for the eye and the action keeps moving. If your taste runs to fantasy of this kind ‘ARABIAN NIGHTS’ is your type of film fantasy!

Blu-ray Image Quality – Universal Pictures and Kino Lorber Studio Classics presents us the film ‘ARABIAN NIGHTS’ in the original 1.37:1 full frame aspect ratio. This is an altogether outstanding 1080p presentation with little in the way of print damage, scratches, and other imperfections. The Technicolor imagery looks totally impressive and this is an engaging, beautiful film. The scan looks naturally filmic and is keeping with the intended aesthetic of the film. The fine layer of film grain is well preserved and is quite impressive.

Blu-ray Audio Quality – Universal Pictures and Kino Lorber Studio Classics brings us the film ‘ARABIAN NIGHTS’ with just one standard 2.0 DTS-HD Master Audio experience. This is a surprisingly robust and pleasurable listen. The audio track has excellent clarity and detail given the age of the source elements. There were no distracting instances of egregious hiss, crackle, pops, warps, and other unwelcome audio elements which can result from a poor quality master. Instead, the track on the release is crisp, clear, and easy to understand. Dialogue is well reproduced and the track never sounds overly tight or muffled.

Finally, ‘ARABIAN NIGHTS’ is a thrilling adventure that has enough charm and spectacle to keep things engaging for audiences who have become accustomed to CGI-laden blockbusters. ‘ARABIAN NIGHTS’ is every bit as entertaining as ‘The Thief of Bagdad’ also with Sabu and is great escapism which we all sorely need right now! Though some might feel the film is too dated in some respects, the action and spectacle remains a really worthwhile experience. The Blu-ray release is top-notch and features a superb presentation. Highly Recommended! 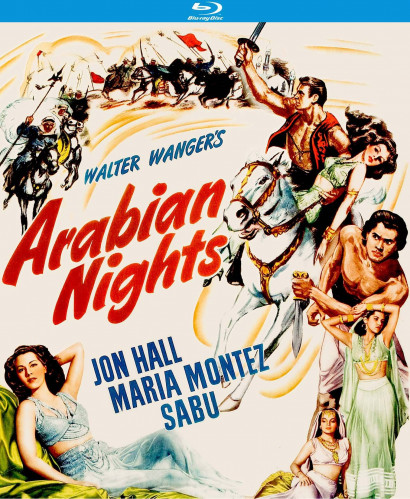 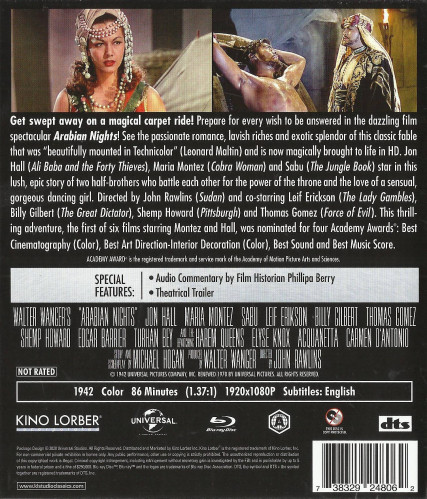