‘ARIA’ is a completely unique film. Ten of the world's most creative and celebrated directors were each given the same brief: to choose a piece of opera music and then present a visual interpretation of that music with complete artistic freedom. Music was sourced from the massive RCA Red Seal catalogue; the score features some of the world’s best opera singers.

‘ARIA’ was produced by British filmmaker Don Boyd for Lightyear Entertainment in 1987. Going back to the original 35mm Internegative, the film has now been painstakingly   restored and transferred to a 1080p HD master.

Andrew’s Blu-ray Review: ‘ARIA’ is a 1987 British anthology film produced by Don Boyd that consists of ten short films by ten of the world's most creative directors were given the same brief; choose a piece of opera music and present a visual interpretation of it, each showing the director's choice of visual accompaniment to one or more operatic arias.

The film ‘ARIA’ is dedicated to the composers, singers, conductors and orchestras whose work has thrilled audiences in theatres, opera houses and concert halls for over 300 years.

‘ARIA’ is a completely unique film and goes from the sublime to the absolute ridiculous, and the producers of ‘ARIA’ decided to take cutting  edge directors and have them create short music video type films inspired by music from grand opera. The diversity of film-making styles resulted in an exhilarating operatic anthology, includes erotic, violent, funny and poignant. The results can sometimes feel wildly uneven, but nevertheless they are very enjoyable in this one of a kind ensemble film. There is little or no dialogue from the actors, with most words coming from the libretto of the operas in Italian, English, French, or German.

Attempts to translate opera into film date back to the birth of cinema. ‘ARIA,’ should rank as one of the most flamboyantly original and provocative. Nine directors, with a 10th, Bill Bryden, providing a linking trail between them all with actor John Hurt and were given a budget of £50,000 and commissioned by producer Don Boyd to choose an extract from an opera and let their visual imaginations run wild and Don Boyd describes the result as “an operatic Fantasia.” Quality wise, it tends to varies with some of the videos, but that is all part of the fun of this very unique and quirky film.

The formality of French court opera inspires two of the best sequences: Jean-Luc Godard counterpoints Lully’s “Armide” with the erotic bodybuilders, and Robert Altman points the camera at an orgiastic 18th-century audience driven crazy by “Les Boréades.” Ken Russell does something like he always does, going well over the top with his interpretation of “Nessun dorma.” Derek Jarman is his usual off the wall left field genre with “Depuis le jour.” But what a pity that neither Orson Welles nor Frederica Fellini lived so they could have taken part and direct their own unique videos, as Don Boyd had originally planned. Anyway, here is what you get to view:

Un Ballo in Maschera: This is a fictionalised account of the visit by King Zog I of Albania to Vienna in 1931, to see a lover, when opponents tried to assassinate him on the steps of the opera house, but by shooting back he survived. Music composed by Giuseppe Verdi Extracts: Prelude, "Re dell' abisso," "Di che fulgor che musiche," "La rivedra nell'estasi," "Ebben si t'amo," "Mezza note" and "O giustizia del fato." Filmed on location in Vienna and London.
Starring: Theresa Russell and Stephanie Lane.
Written and Directed by Nicolas Roeg.
Music: Un Ballo in Maschera (extracts) by Giuseppe Verdi.
Sung by Leontyne Price, Carlo Bergonzi, Robert Merrill, Shirley Verrett and Reri Grist.
RCA Italiana Orchestra and Chorus.
Conducted by Erich Leinsdorf.

Rigoletto: Here we have a bedroom farce set in the Madonna Inn at San Luis Obispo, in which a film producer cheats on his  wife with a pneumatic German starlet while unaware that his spouse is also there in the inn with a clandestine hunk of her own. The finale is a dance routine to La donna è mobile sung by an Elvis impersonator. Filmed on location at the Madonna Inn, San Luis Obispo, California.
Starring: Buck Henry, Beverly D'Angelo Garry Kasper, Anita Morris, John Hostetler (Elvis), Albie Selznick, Stan Mazin, Dominic Salinero and Jeff Calhoun.
Written and Directed by Julien Temple.
Music:  Rigoletto (extracts) by Giuseppe Verdi.
Sung by Robert Merrill, Anna Moffo and Alfredo Krause.
RCA Italiana Orchestra and Chorus.
Conducted by George Solti.

Die tote Stadt: In the seemingly dead city of Bruges in winter, footage of empty buildings in deserted streets is intercut with a duet of two lovers in an ornate bed chamber. Filmed on location in Bruges and in Windsor, England.
Starring: Elizabeth Hurley and Peter Birch.
Written and Directed by Bruce Beresford.
Music: The Lute Song from Die tote Stadt by Erich Wolfgang Korngold.
Sung by Carol Neblett and René Kollo.
Vocal Consultant: Janet Edwards.
Munich Radio Orchestra.
Conducted by Erich Leinsdorf.

Les Boréades: In the Théâtre du Ranelagh set in Paris in 1734, a preview of the opera is given to an audience of inmates from a mental asylum. Filmed on location in the Théâtre du Ranelagh in Paris, France.
Written and Directed by Robert Altman.
Music: Suite Des Vents, Un Lieu Desole and Jouissons, Jouissons from Les Boréades by Jean-Philippe Rameau.
Sung by Jennifer Smith, Anne-Marie Rodde, Philip Langridge, Monteverdi Choir and English Baroque.
Conducted by John Eliot Gardiner.

Liebestod: Here we find two young lovers drive down Fremont Street in Las Vegas at night and in a cheap hotel, after making love, slash their wrists in the bath. To me this video, out of all the videos I viewed, was the most uncomfortable to watch and I personally felt people who are vulnerable and feeling very depressed when viewing this video, might contemplate and encourage them to do what this young coupe did. Filmed on Location in Las Vegas and in Cameron, Coconino County, Arizona.
Starring: Bridget Fonda, James Mathers, Angie Telamontie, Esther Buchanan, Lorraine Cote, Renee Korn, Bertha Weiss, Diane Thorne, Howie Maurer, Derick Coleman and Quentin Brown.
Written and Directed by Franc Roddam.
Music: Liebestod from Tristan und Isolde by Richard Wagner.
Sung by Leontyne Price.
London Philharmonia Orchestra.
Conducted by Henry Lewis.

Nessun dorma: Unconscious after a car crash, a lovely young girl imagines her body is being adorned with diamonds and rubies in a tribal ritual, when in fact it is the preparations for surgery. After nearly dying on the operating table, she comes back to life. Filmed at Unit 5 Studios, Battersea, London.
Starring: Linzi Drew, Andreas Wisniewski, Kwabena Manso, Bella Enahoro, Bunty Mathias and Angela Walker.
Written and Directed by Ken Russell.
Music: Nessun dorma from Turandot by Giacomo Puccini.
Sung by Jussi Björling.
Rome Opera House Orchestra.
Conducted by Erich Leinsdorf.

Depuis le jour: A veteran opera singer gives her final performance, intercut by home movies of her on holiday when young and in love. Filmed on location in Scotland, Cornwall and in studios in London.
Starring: Amy Johnson, Tilda Swinton and Spencer Leigh.
Written and Directed by Derek Jarman.
Music: Depuis le jour from Louise by Gustave Charpentier.
Sung by Leontyne Price.
RCA Italiana Orchestra and Chorus.
Conducted by Francesco Molinari-Pradelli.

Pagliacci: In an ornate opera house, empty except for a possibly imaginary young woman, an aging virtuoso mimes his aria to an old cylinder recording and dies. Filmed on location at The Teatro Comunale Ponchielli in Cremona, Italy.
Starring: John Hurt and Sophie Ward.
Directed by Bill Bryden.
Written by Bill Bryden and Don Boyd.
Music: Vesti La Giubba from Pagliacci by Ruggero Leoncavallo.
Sung by Enrico Caruso.

Blu-ray Image Quality – Lightyear Entertainment presents this Blu-ray ‘ARIA’ with a stunning remastered 1080p image and enhanced with a 1.78:1 aspect ratio and with some of the films, they are now looking noticeably even better and cleaner than when the film was released in the cinema. Additionally there is some variability in the light and dark scenes. Some grain is visible with just two of the videos, which were La Vergine Degli Angeli and it was because the director Charles Sturridge wanted to film it in Black-and- White to make it look very gritty, because of the subject matter and “Louise” by Derek Jarman and I suspect he wanted the video to look this way and perhaps partially the result of two of the directors were using different film stock. This 30th Anniversary Edition is amazing and Lightyear Entertainment and Virgin Films have done a sterling work in upgrading this film.

Blu-ray Audio Quality – Lightyear Entertainment brings us this Blu-ray ‘ARIA’ with a 2.0 LPCM Stereo Audio experience and despite them using the older RCA recordings technology, sometimes the sound quality is variable throughout the film, and though it features some audio recordings that are very rare, unfortunately the sound quality can seem not very even throughout the film. The stereo separation is quite lively at times, and fidelity is generally very good and the quality seemed fairly solid. Dialogue and effects appeared infrequently and provided a small part overall of the audio track experience. The music aspect of all the different videos was generally overall very good. Nonetheless, the soundtrack for ‘ARIA’ remained adequate for a 1987 film. The 2.0 LPCM Stereo audio showed a little more range and clarity compared to the old Dolby Digital version for the inferior DVD release.

Special Feature: Photo Galleries: Here you get to view 10 Photo Galleries, featuring the work of world-class Colour and Black-and-White photographers for each segment of the film, which includes the following:

Finally, imagine that ten of the world’s most well-known highly regarded filmmakers were given complete artistic freedom to make their vision and interpretations of classical opera music. ‘ARIA’ is that unique history-making film, that contained sex, thought-provoking and funny images, which some film critics raved about, where audiences flocked to see, and no one could stop talking about the film. ‘ARIA’ is filled with esoteric themes (meaning that it is intended for or likely to be understood by only a small number of people with a specialised knowledge or interest) and at times we get to view some “shocking” imagery. With theese 10 short films, many feature interesting and stunning cinematography. Additionally many of the short films feature gratuitous nudity or erotic nuances. One would have hoped, however, that there would also be included some special features into the insight into the films and its assorted participants. Fortunately, as a whole, and with regards to its separate parts, there are more plusses than minuses. And with the longest chapter lasting just 14 minutes, and the shortest just five, at least the worst of the ten avoid wearing out their welcome, while the best conclude as concise, perfectly satisfying components. So all in all, ‘ARIA’ is a totally unique experience and well worth purchasing, especially if you love quirky thought provoking imagery. Highly Recommended! 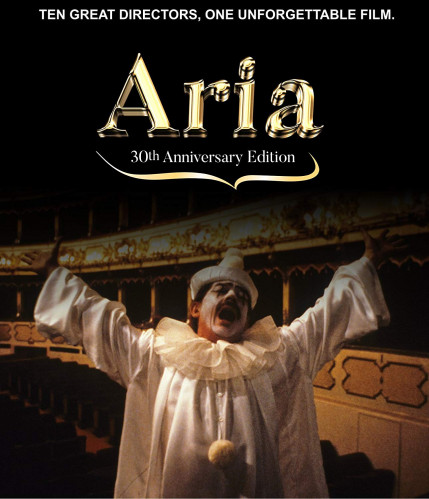 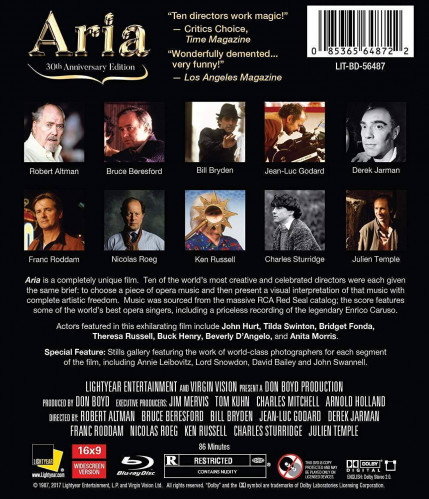