When Arthur uncovers a distress call sent from Minimoys, the invisible people who live in his own back yard, he knows that once again, he must embark on a great adventure to battle against the evil Maltazard and save Princess Selenia. Little does he know that this is an evil trick by his arch nemesis to reverse the magic of transformation to become a giant when Arthur passes into the Minimoy's world. Now at less than half an inch tall, Arthur must save his own world from a giant evil Maltazard. Will this little hero have what it takes? Acclaimed and visionary director Luc Besson, in the follow up to ‘Arthur and The Invisibles,’ brings us this brilliant, live action, computer animated, family adventure, starring Freddie Highmore, Mia Farrow and Selena Gomez with Jimmy Fallon, Snoop Dogg, Will.i.am, Fergie [Black Eyed Peas], Iggy Pop and Lou Reed.

Andrew’s Blu-ray Review: ‘ARTHUR AND THE GREAT ADVENTURE’ [2009] is a very nicely acted out animated film and Luc Besson deserves some sort of award for casting Lou Reed and Iggy Pop as its villains. Co-written and directed by Luc Besson, and ‘ARTHUR AND THE GREAT ADVENTURE’ is the sequel to the 2006's part animation, part live action ‘Arthur and the Invisibles,’ though it actually combines both the 2nd and 3rd films in the series ‘Arthur and the Revenge of Maltazard’ and ‘Arthur 3: The War of the Two Worlds.’ Arthur [Freddie Highmore], who doesn't seem to have aged at all, is excited to return to the animated land of the Minimoys, but horrified when his father Armand [Robert  Stanton] announces that they will shortly be leaving Granny  [Mia Farrow] house.

With the animated film ‘Arthur and The Invisibles’ [2007] which at that time, was the most expensive French production in history, the third entry in this children’s animated series (co-created and directed by Luc Besson) comes to Blu-ray. The animated film is a mixture of live-action and computer animation, this is the tale of a young boy called Arthur who yet again finds himself teaming up with his mystical friends, The Minimoys. They are little elf-like creatures who live in the woods, and this time around, the two worlds collide as villain Maltazard [Gérard Darmon] escapes from his miniature surroundings with a potion which enables him to grow to human size. Arthur calls on the help of his friends Snow [Omar Sy] and Replay [Fergie] and they too, venture to the outside world in an attempt to stop Maltazard.

With elements of ‘The Borrowers’ and ‘A Bug’s Life,’ but with ‘ARTHUR AND THE GREAT ADVENTURE’ is also, rather confusingly, billed as ‘Arthur 3: the War of the Two Worlds,’ state-side, will certainly appeal to many children out there, but unlike the recent critical and commercial hits to stem from both DreamWorks Animation and Disney/PIXAR, there is little here to engage an adult audience. Everything is pitched at a child-like level, and many of the flesh and blood grown-up cast give extremely broad and irritatingly OTT performances, even for a children’s film. Once again, it’s left to the computer artists to do their best to create a world of wonder, and for the most part, they do an admirable job.

The CGI characters integration into the real world is surprisingly impressive and definitely has that wow factor, particularly the now-huge and imposing Maltazard, which is voiced by a less-than-enthusiastic Lou Reed of all people, whose interaction with both Arthur’s family and the broader human world is as flawless and believable as the crustacean-like aliens in District 9. Freddie Highmore once again plays both the live-action and Minimoy-ied Arthur, a transformation achieved by a magic telescope, and gives a pretty likable performance in each world.

There’s little here to suggest Luc Besson’s directorial imprint on the material, although Maltazard visage resembles a slimmed-down version of Zorg’s canine-looking henchmen in the director’s intergalactic yard, ‘The Fifth Element,’ but many of the action scenes, both in the digital and real world, have an exciting, cinematic flair to them and the live-action sequences, set in a nondescript, small-town 1960’s America, are imbued with a crisp, nostalgic gleam and a vision palette that appears to be a precursor to Luc Besson’s recent big-screen release, ‘The Extraordinary Adventures of Adèle Blanc-Sec.’

Although ‘ARTHUR AND THE GREAT ADVENTURE’ is extremely unlikely to give PIXAR, John Lasseter and Company any sleepless nights, there’s enough imagination on display here to keep kids entertained, although with a running time of over 100 minutes, it may test the patience of a very young audience, but still these films are not always mainly aimed at youngsters, the whole family can indulge and enjoy this film very much. The biggest fascination thereafter is in trying to guess how Luc Besson was able to lure actors of the quality of Freddie Highmore, who I thought was totally out of his depth and a totally useless actor and Mia Farrow added to the project, as well as a voice cast packed full of music pop icons.

PAST THE POINT (Written by Darrell Wayne Perry and Tommy Smith)

TIME TO GET MOVING (Written by Lionel Wendling)

Blu-ray Image Quality – The animated film ‘ARTHUR AND THE GREAT ADVENTURE’ is presented in the theatrical aspect ratio of 2.35:1 and the stunning 1080p encoded anamorphic image that is enhanced for widescreen televisions is awesome. With only a couple of exceptions, sharpness is stunning in these films, and the colour saturation is gorgeous. The live action sequences are also wonderfully realised in terms of sharpness, colour and flesh tone accuracy, and black levels. The animated sequences reveal no banding, and overall, the results are simply splendid. The film looked like a 3D presentation, but sadly the image transfers is only 2D. Please Note: Playback Region B/2: This will not play on most Blu-ray players sold in North America, Central America, South America, Japan, North Korea, South Korea, Taiwan, Hong Kong and Southeast Asia.

Blu-ray Audio Quality – This animated film is as good as the soundtracks on any PIXAR or DreamWorks CGI film on Blu-ray, the 5.1 DTS-HD Master Audio surround track is reference quality all the way. There are wonderful pans, swoops, and zooms across and through the sound field, and the music has a terrific resonance throughout the film. Bass levels are quite deep and most impressive. Dialogue shows up clearly in the centre channel. So all in all, this is top notch quality surround sound that at times will make you duck, thinking the animals and insects have invaded your lounge.

Finally, 'ARTHUR AND THE GREAT ADVENTURE’ animated film is a very colourful and highly imaginative milieu, with plenty of amusing touches, which grow into witty-in-jokes, like Arthur’s untamed hair in his micro-form being such a turn-on for Minimoy girls, while Luc Besson’s decidedly cine-literate approach to such obvious children’s entertainment boasts a surplus of both content and style likely to appeal to parents and film buffs in general. It’s a cliché to claim that a “family film” has “something for everyone” but, in this case, that’s very probably true. Honest! If you enjoyed the fantasy and adventure of those otherworldly micro-verse realms, as depicted in digital-animation films like ‘Honey, I Shrunk The Kids’ and ‘A Bugs Life,’ then Luc Besson’s magical ARTHUR AND THE GREAT ADVENTURE’ animated film should appeal, especially as its humour skilfully avoids the sentimentally of a typical Disney product and a PIXAR free mentality. Highly Recommended! 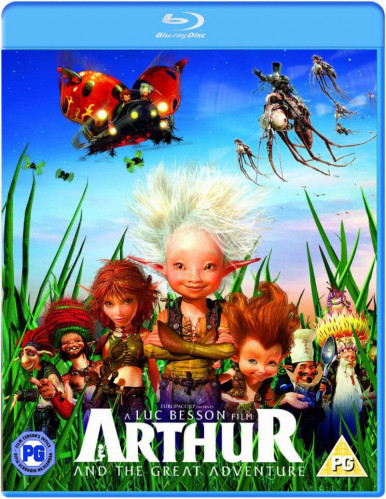 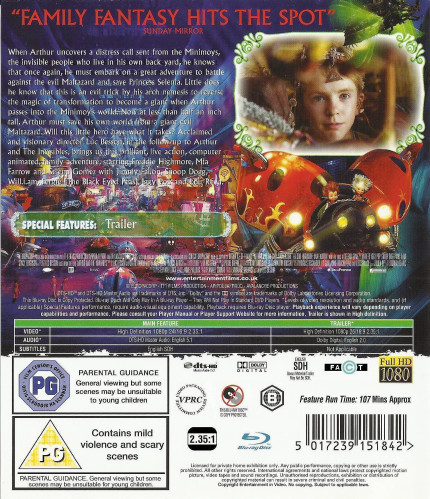