Atlantic City is revitalized as a resort when gambling is legalized. But the new industry also brings unsettling changes. For Lou Pascal [Burt Lancaster], a 40 years old small-time mobster come bodyguard and boyfriend to aging beauty queen Grace [Kate Reid], and his number-running side-line escalates to mob involvement. Lou Pascal begins becoming involved with Sally Matthews [Susan Sarandon], Lou Pascal finds a way to achieve the success he has dreamed of, but his plan may endanger both their lives.

FILM FACT No.2: The film ‘ATLANTIC CITY’ features a cameo by Wallace Shawn as a waiter in a restaurant; Louis Malle's next film was ‘My Dinner with Andre,’ where Wallace Shawn is waited on as a customer. ‘ATLANTIC CITY’ was filmed on location in and around Atlantic City and South Jersey, Philadelphia, and New York. Although filmed in the United States, the film was a co-production between companies based in France and Canada. Aside from Burt Lancaster, Susan Sarandon, and local extras, most of the cast originated from Canada or France. The film allowed Canadian actors such as Kate Reid and Al Waxman to successfully transition into American film and television roles.

Andrew’s Blu-ray Review: In the film ‘ATLANTIC CITY’ [1980] New York playwright John Guare made his screenwriting debut with ‘ATLANTIC CITY,’ which is a lyrical tale full of offbeat characters, richly textured, and this fable of a film offers half a dozen portraits of wasted American lives, filtered through the European sensibility of French director Louis Malle, revels in accumulating telling detail to conjure up a special time and place that he captures the old Atlantic City before the destruction of the old hotels and the construction of the new casinos. And he encourages Oscar-nominated Burt Lancaster to give the best performance of his old age, a subtle masterwork of miniaturist nuance.

Burt Lancaster, who is in top form, plays Lou Pascal, an aging small-time hood, who hangs around Atlantic City doing odd jobs and supports himself by running numbers and tending to the needs of a bedridden widow, Grace [Kate Reed] in an over the top theatrical performance, who was the broken-down moll of the deceased gangster for whom Lou Pascal was a gofer.

Sally Matthews [Susan Sarandon] is in Atlantic City to learn to be a blackjack dealer with the hope of graduating into the ranks of the Monte Carlo casinos and represents the youthful hopes and dreams of a small town girl trying to make it big. Living in an invented past, Lou Pascal identifies with notorious gangsters, and gets involved with the would-be croupier Sally Matthews who is also his neighbour.

Lou Pascal on the other hand, is an aging gangster whose star has faded, much like Atlantic City, which at that point is in pretty decrepit condition. The grand old hotels are being demolished to make way for the fancy casinos. Lou Pascal represents what’s left of the old Atlantic City back in its glory days. “You should have seen the Atlantic Ocean back then,” he says, in one of the film’s sentimental and inadvertently funny lines in the film. So, lots of metaphors going on here.

But Sally Matthews’s ex-husband follows her with a load of stolen cocaine that he wants to sell, and of all things, he drags along Sally’s sister, whom he gets pregnant. However, that’s not all! Along with making a paltry living by running numbers, Lou Pascal serves as grudging caretaker for Grace, an elderly invalid who lives downstairs and periodically summons him by ringing a bell, a bit like a live-in Butler.

‘ATLANTIC CITY’ itself is a character in the film and a story of hopes and dreams, a glorious past, and an uncertain future. You could say it gives a Franco-Canadian perspective on the American Dream. But of course we cannot forget the scene in the film when Lou Pascal and the lemon-fresh Sally Matthews end up in a very intimate relationship.

For a Franco- Canadian film, that has the plot device that smacks strongly of Hollywood. But, hey it helps having Burt Lancaster, as the leading actor. Also in the cast are Michel Piccoli, Hollis McLaren, Robert Joy, Al Waxman, Robert Goulet and Wallace Shawn. Director Louis Malle hired composer Michel Legrand to write a score, but decided against using it and opted for all the music in the film to be ambient. The only music is what exists in the film’s world, such as radios or musical instruments.

‘ATLANTIC CITY’ is a superb cinematic manifesto on the passage of time, it clearly believes old souls are meant to be together long after their perceived expiration dates, and young ones must free themselves from outside burdens and find a specific sense of place. Director Louis Malle revels in such surprising reversals of fortune and new beginnings, but counter-balances the romanticized elements with a real sense of the deteriorating environment. As the credits roll, Louis Malle frames an old hotel getting pummelled by a wrecking ball, an object of destruction dancing to a hybrid mix-tape of all the classic songs representing the history of Atlantic City. It is certain all things must go through cycles, and the key to lasting happiness and fulfilment is surviving long enough to see what comes next. So all in all the film ‘ATLANTIC CITY’ is a great and brilliant film, and if you have never seen it, then this Blu-ray disc is a must purchase to add to your film collection.

SONG OF INDIA (Music by Nikolai Rimsky-Korsakov) (uncredited) [used with the permission of LEO FEIST INC.]

Blu-ray Image Quality – Gaumont brings us this brilliant Blu-ray release in a fantastic and beautiful 1080p image presentation and an equally brilliant 1.66:1 aspect ratio that really shows off this film as it should be seen in very natural colours, especially as it is a sort of “film noir” interpretation from the brilliant director Louis Malle and gives a very filmic look. The presentation manages to hold up here surprisingly well on this Blu-ray disc, and skin tones look very natural. The picture image is very clean and polished, and especially for the age of the film. Overall, Gaumont has done an absolutely fantastic job delivering this older catalogue title and especially fans of this film will be more than pleased with the result.

Blu-ray Audio Quality – Gaumont gives us a choice of French: 2.0 DTS-HD Master Stereo Audio and English: 2.0 DTS-HD Master Stereo Audio experience. ‘ATLANTIC CITY’ is accompanied by the brilliant film composer Michel Legrand’s dynamic and at the same time, very melodic film score. The sound once again is very crisp and clear, plus there are no sudden drop outs in the dynamic activity of the film and predictably, the audio presentation is very good, with some subtle orchestral nuances to add to the atmosphere of this brilliant film. Clicks, pops, crackle, and background hiss you had with these old films, especially with the inferior DVD release, have been totally removed and the dialogue is stable and exceptionally easy to follow. So well done Gaumont for presenting us with a really professional job with this brilliant Blu-ray disc.

Finally, ‘ATLANTIC CITY’ [1980] lets us experience director Louis Malle’s personal ode to Atlantic City, a city in transition and little people with littler dreams served not only as a showcase for Burt Lancaster as a sad and lonely numbers runner in the rundown township, but also provided Susan Sarandon with her first Oscar nomination and of course not to mention the incredibly memorable opening sequence and I doubt anyone who sees it will be able to slice another lemon the same way again. Director Louis Malle offers up lowlife characters, but never seems to be judging them, allowing viewers to connect with them on our own individual terms. This definitely has a European cinema feel to it, despite its American setting, and carefully avoids a multitude of could have-been clichés within its storyline, drugs, casinos, mob bosses, running from hired killers. Even the “action” sequences feel somehow dreamlike and otherworldly, with the chase of scruffy dealer Robert Joy in the rotating car park is definitely a distinct highlight in the film. Kate Reid’s performance, as Burt Lancaster’s brassy and sassy downstairs neighbour and sometimes paramour, is another outstanding moments in this totally brilliant director’s Louis Malle film. Very Highly Recommended! 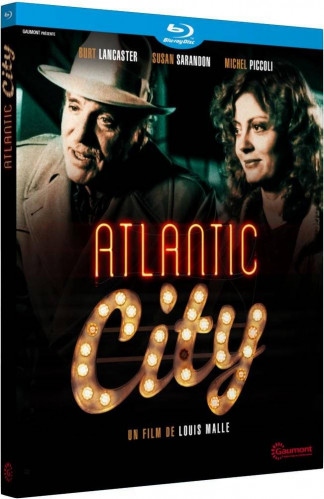 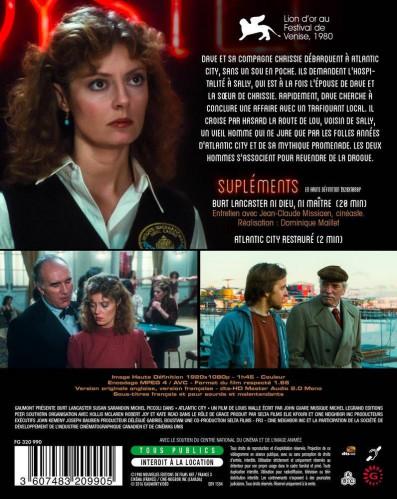