BARBARELLA: QUEEN OF THE GALAXY [1968 / 2012] [Blu-ray] [USA Release]
The Space Age Adventuress Where Sexploits are Among the Most Bizarre Ever Seen!

The year is 40,000 on Planet Lythion where Barbarella [Jane Fonda] makes a forced landing during a secret mission to find the lost evil scientist Durand Durand [Milo O'Shea]. Once there, she must use her skills, style, beauty and eroticism to vanquish evil in the form of robots and monsters. See Barbarella do her thing in the wild excessive machine, in the biting bird cage, in the chamber of dreams, in the labyrinth of love, in the deadly doll house, in the palace of pleasure. You'll find adventure beyond your imagination, when you get lost in space with Barbarella! It has since become a brilliant cult film.

FILM FACT No.2: The film was particularly popular in the United Kingdom, where it was the year's second-highest-grossing film. Contemporary film critics praised BARBARELLA's visuals and cinematography, but found its storyline weak after the first few scenes. Although several attempts at sequels, remakes, and other adaptations have been planned, none has entered production. ‘BARBARELLA: QUEEN OF THE GALAXY’ has influenced popular music, with Duran Duran taking its name from the film's antagonist.[64] The group later released a concert film, ‘Arena’ (An Absurd Notion), with Milo O'Shea reprising his role from ‘BARBARELLA: QUEEN OF THE GALAXY.’ Ariana Grande's 2014 music video for "Break Free" was also influenced by ‘BARBARELLA: QUEEN OF THE GALAXY.’ A sequel to ‘BARBARELLA: QUEEN OF THE GALAXY’ was planned in November 1968. Producer Robert Evans said that its working title would be ‘Barbarella Goes Down,’ with the character having undersea adventures. Terry Southern said that he was contacted by Dino De Laurentiis in 1990 to write a sequel "on the cheap ... but with plenty of action and plenty of sex," and possibly starring Jane Fonda's daughter.

Andrew’s Blu-ray Review: My goodness, this is pulp science-fiction at its finest. Roger Vadim's cult 1960s sci-fi fantasy, starring Jane Fonda. A beautiful young astronaut uses the power of love to fight the forces of evil in the 41st century. ‘BARBARELLA: QUEEN OF THE GALAXY’ is best known as the famed French comic strip comes to glorious psychedelic life in this 41st-century space opera from director Roger Vadim. Once you get past Jane Fonda's infamous antigravity striptease however, the script turns rather dull and the imaginative sets steal the whole show as Jane Fonda's nubile intergalactic bimbo experiences close encounters of the sexually bizarre kind. A pleasure machine, cannibalistic dolls and Anita Pallenberg's Black Queen help ease the verbal vacuum in Vadim's relentless visual assault, which is sure to delight some and prove tiresome to others.

The film starts out with Barbarella dressed in a spacesuit floating around in a zero gravity room with furry carpet on the walls and ceiling. She then proceeds to strip out of the spacesuit until she is naked, all still while floating in zero gravity and while a 1960s pop song plays. That 5 or so minute opening really sums up the film perfectly. After an in-flight anti-gravity striptease (masked by the film’s opening titles), Barbarella, a 41st century astronaut, lands on the Planet Lythion and sets out to find the evil Durand Durand in the city of Sogo, where a new sin is invented every hour. There, she encounters such objects as the Excessive Machine, a genuine sex organ on which an accomplished artist of the keyboard, in this case, Durand Durand himself, can drive a victim to death by pleasure, a lesbian queen who, in her dream chamber, can make her fantasies take form, and a group of ladies smoking a giant hookah which, via a poor victim struggling in its glass globe, dispenses Essence of Man. You can’t help but be impressed by the special effects crew and the various ways that were found to tear off what few clothes our heroine seemed to possess.

The film never takes itself serious and it even makes fun of itself a few times through. I can only imagine this must have been fun as hell for the actors to film. It's pure light-hearted pulp B-movie goodness. Everything from the film to the poster art and misleading subtitle “Queen of the Galaxy” where this film breathes pulp sci-fi. The entire film, from the effects to the plot and also to the visuals, is totally light-hearted nature and experience.

Aside from great set and costume design this film, believe it or not, actually has some genuine artistic merit. The cinematography I found to be fairly good, especially for a film of this kind of nature, that is. There were some cool shots and overall the film is pretty visually appealing and I'm not just talking about Jane Fonda. The soundtrack has some great 1960s pop tunes.

It is sexy, it is camp, it is cheesy, it is funny, it is totally retro, and it is 1960s, oh so French-y, and of course it is of totally awesome fun.  And ultimately it achieves its goal by translating the erotic pulp fiction “Barbarella” comic strip it is based on to film. Though I personally have not read the comics, it seems that this is one of the best and most truthful adaptions I've seen. Of course the plot is very silly and ridiculous, but that's what makes it a great escapism film. Would you really watch this film for its plot? And sure Barbarella is not a particularly kick-ass heroine. She is very easily knocked unconscious and her best defence is screaming for help. But none of that matters, and it seems that all of it was intentional. And to those who think ‘BARBARELLA: QUEEN OF THE GALAXY’ is sexist, well sure Barbarella is kind of a helpless young woman, who uses sex to her advantage, but also for pleasure, but the original “Barbarella” comic strip and of course the film as well, I suppose did help start and fuel the Sexual Revolution in the 1960s.

Filled with bizarre scenery and over the top characters, the filmmakers introduced us to things like the Excessive Machine, an organ, if played with enough skill, will cause death from sexual pleasure. Bad guy, Durand Durand, has those skills. Sogo, the space port Barbarella is trying to make it to, invents a new sin every hour. Factor in the lesbian queen that can make fantasies become reality, giant hookah pipes, and every manner of cheesy special effects that 1968 had to offer and you will be glad you will spend 98 minutes watching this film. The score is brilliant of course, and dripping with 1960’s psychedelic and sexuality.

Even with its flaws ‘BARBARELLA: QUEEN OF THE GALAXY’ is a joy to watch. Its special effects are kitsch by today’s standards, but are filled with charm and often very well done. The music is suitably “swinging,” “jive” and “cool.” The music is brilliantly composed by Maurice Jarre and this is one of those warts and all experiences that I would like to believe that no-one could truly hate. Surely everyone gets some level of enjoyment from this film, even if it is this joyously silly and daft? I cannot, in good conscience, call ‘Barbarella’ a poor film. This is a work of some kind of pop art type experience and that is what matters. Its influence is spread everywhere from sci-fi, to music to even Avant Garde fashion designs. ‘BARBARELLA: QUEEN OF THE GALAXY’ is also the first science fiction comic book character to have a feature length film adaptation produced. Prior to sci-fi comics that had only been adapted as serials. When watching this film, I am always reminded at how boundary pushing this must have been in 1968. Regardless of the actual technical quality, ‘BARBARELLA: QUEEN OF THE GALAXY’ is a bona fide (he he… bona) cult classic of a film!

LOVE, LOVE, LOVE DRAGS ME DOWN (Written by Bob Crewe and Charles Fox) [Performed by The Glitterhouse]

Blu-ray Image Quality – Paramount Pictures Blu-ray release of ‘BARBARELLA: QUEEN OF THE GALAXY’ is a totally marvellous 1080p image presentation. Film grain is abundant, but in a good way. Every image is finely detailed and you can clearly see the unavoidable generation loss in shots that were subjected to an optical effect, mainly the opening titles. The rest looks pretty much like it was scanned from the original negative, which is the best of all possible worlds. The 1999 inferior DVD was bad by the standards of today, and it never resolved any of the grain problems or the fine detail, and this 1080p encoded image upgrade makes the colour-grading a total benchmark. It does, however, add a significant amount of information to the bottom and right-hand edges of the 2.35:1 frame, noticeably improving the composition of the image proportion shots. The DVD transfer was totally dirty, too, with lots of dust and even thick bits of hair clearly visible on screen in the opening moments and the source material was probably an inter-negative, and none of that nonsense is visible on the Blu-ray Disc. There is some slight damage, but it is only light, that you really have to be looking closely for you to notice. Thanks, Paramount Pictures!

Blu-ray Audio Quality – There's not much to grouse about when it comes to audio, either. Although the 1.0 TrueHD Mono Dolby Audio soundtrack, is spread out across the two front channels, it sounds great at full volume, certainly obviating any need to buy a Compact Disc Soundtrack in hearing “Barbarella Psychedella” theme song, which you will be stuck humming for a week after watching this film. If dialogue can occasionally sound a little bit muffled, I'm sure that's a limitation of the original recordings, not the Blu-ray itself. 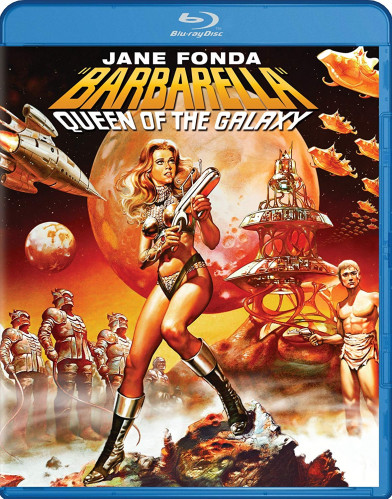 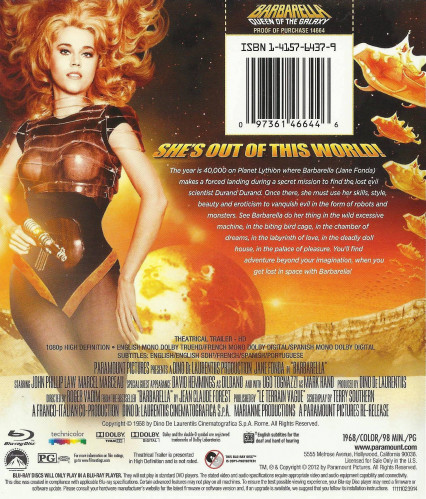