*batteries not included is a delightful fantasy for the whole family presented by Academy Award® winner Steven Spielberg. When an unscrupulous real estate developer sends thugs to get rid of the last five tenants of a deteriorating apartment building, they need a miracle to save their building from demolition. One night, when all hope seems lost, tiny visitors from outer space mysteriously glide through their windows and begin to turn the tide with their magical powers. Filled with dazzling special effects, this amazing story of intergalactic warmth stars the acclaimed husband-and-wife team of Hume Cronyn and Jessica Tandy as a pair of feisty long-term tenants whose faith is rewarded in ways they never expected.

FILM FACT No.2: The story was originally intended to be featured in the television series “Amazing Stories,” but executive producer Steven Spielberg liked the idea so much that he decided to adapt it into a film. It is also notable for being the feature film screenwriting debut of Brad Bird. Principal photography started in New York in August 1986, but location scouting began almost a year before. “Since the story called for a solitary building amidst rubble,” explained producer Ronald Schwary, “We had to find a vacant lot with burned-out buildings all around it. We finally settled on an actual building on 8th Street between Avenues C and D on New York's Lower East Side, which the building no longer stands, and was probably located on the site of the current Housing Bureau substation, or the building to the east, approx. 40°43'27.33'N 73°58'40.49'W. Production designer Ted Haworth designed a three-sided, four-story tenement facade and oversaw its construction on a location that covered most of a city block. In the name of authenticity, he brought 50 to 60 truckloads of rubble to cover the once vacant lot. It was so remarkably realistic that the Sanitation Department came by and took away prop garbage one morning, potential customers stopped by to eat in the diner, and the business agent for the Plumber's Local of New York visited, demanding to know why there wasn't a permit down at City Hall for the construction.”

Steven Spielberg produced sci-fi fantasy starring Hollywood veterans Hume Cronyn and Jessica Tandy. Here we find a run-down Manhattan building where the neighbourhood is being bulldozed and thwarted by unscrupulous property developers, but where one block of tenants would rather stay put. When the developers bring in some heavy persuading tactics, the tenants led by the ageing couple Frank Riley [Hume Cronyn] and Faye Riley [Jessica Tandy] who will not vacate the building and are thrown a lifeline by tiny extra-terrestrial visitors. Neither will several of their neighbours, which include Harry [Frank McRae], a former boxer who watches TV all day; Mason [Dennis Boutsikaris] a young failed painter; and Marisa [Elizabeth Peña] a pregnant Hispanic woman. The developer's henchman has hired a local gang headed by Carlos [Michael Carmine] to terrorize the tenants into moving out, but of course one day after Frank Riley prayed for a miracle, two beautiful tiny spaceships show up to even the odds against nasty people wanting to drive them all out. As to the extra-terrestrial visitors, they are not only very friendly, they are also very sly, and very powerful, but they also reproduce something special and a joy! This unlikely 1987 fairy tale-comedy has its really wonderful beautiful emotional moments; mostly, in seeing the great old pros Hume Cronyn and Jessica Tandy do their grouchy and light-headed shtick, respectively.

Add equal parts of the film ‘COCOON’ and the octogenarian revamp and E.T.’s genial alien therapy, the merest sprinkling of trite robot-as-human prattling ‘SHORT CIRCUIT,’ undercook on a low creative heat and serve mentioning the fact Steven Spielberg is, unfathomably, involved at some blueprint stage. Make way for the brilliant director Matthew Robbins, who is running with an idea from Steven Spielberg, is working on the basis that making things smaller will always make them far more endearing. These flying electric tin-lids with blue headlamps for eyes are supposedly alive in some respect. At one point, they even multiply producing even more tiny hovering flying saucers, on which to lavish our aw-struck reactions from the residents of the run down building.

They are, to be fair, assisted by some talented human beings, in the form of actors Hume Cronyn and Jessica Tandy as the elderly couple who need saving by these hard-wired pie-dishes, give it a strange sense of plausibility, or at least, a sense of purpose. After all, it is just a harmless tale set in a bullying modern New York of nasty scowling real-estate developers, where the magic of these winking micro-bots is enough to send them packing.

‘*batteries not included’ is very cute and totally charming in a way that will probably go down easy for those that like heart-warming family fare. The spaceships have personalities all of their own, and are fun to watch in their own way, and they will no doubt captivate young children as well.  If there is a downside, it comes in the form of some fairly intense violent scenes that occur as the story reaches its climax and young children might be susceptible to be easily frightened and may not be ready to handle the sometimes brutal turns of events, despite the film picking up with a predictable and wonderful happy ending. Decent special effects and solid performances from Hume Cronyn and Jessica Tandy help bolster this worthwhile experience and definitely stands up well enough on its own due to it being very good-natured and totally amusing for a modern day fairy tale for the sci-fi generation of today.

This very utterly cute and unusual film is totally compelling and definitely an all-round entertainment with a haunting bitter-sweet tone, sometimes with an air of sadness and wisdom, as well as hopeful positive spirit and a touch of cute friendly little aliens. It carves its own little niche and takes its place as an out of ordinary experience in a beautiful film that should appeal to all age groups. Director Matthew Robbins [‘Dragonslayer’] shows that he is up there with the top class group of screenplay/director. With this film Matthew Robbins is in total control and is also in command with the material at hand and on top of all that Matthew Robbins fully capitalises on the set-up and with his actors, whom he uses and respects perfectly. The Industrial & Light Magic trick effects work on the film is impressive for a film released in 1987.

As to the composed film music score for ‘*batteries not included’ that might seem another of James Horner's slapdash, everything-but-the-kitchen-sink scores, but while it does embrace an eclectic array of styles and approaches, this slight but charming musical offering effort helps with the off-the-wall plot, where sentient UFOs are stranded on Earth and affords James Horner the opportunity to explore considerable ground, and he responds with themes that span  from effervescent big-band tributes “Café Swing” to the dark, dissonant soundscapes, with the six-minute “Arson” music score. What keeps it all together is the pure Hollywood classicism of James Horner's vision. ‘*batteries not included’ beautifully captures the sense of imagination and wonder so central to the cinematic  experience, with none of the emotional bludgeoning that hampers so much of James Horner the composer's music which is brilliant brought to life throughout the film to enhance the film magical performance.

Blu-ray Image Quality – Universal Pictures presents you at last this fantastic magical film in glorious 1080p image and the equally 1.85:1 aspect ratio is very impressive. The film has plenty of rich textures abound, and frequently presents each one with very impressive clarity and also nice definition. Urban rubble is particularly well textured and tangible, but so too are the more fatigued accents around the apartments, worn down surfaces in the diner, and fine bits of scrap and random trash and treasure alike. The clothing textures capture a great deal of detail, and finer skin tone details on the younger and older characters alike, reveal every intimate essence that look really nice and natural. The grain of the film remains intact at times and especially with the darker scenes. Colours are very nice looking and the dreary brown colours dominates, but splashes of colours on the clothing is good, as well as all the colour paints stand out with considerable nuance, as well as natural vibrancy. All in all it is a very attractive film-quality presentation so full marks to Universal Pictures.

Blu-ray Audio Quality – Universal Pictures brings to you at  last this fantastic beautiful film in a wonderful rich technical 5.1 DTS-HD Master Audio presentation. The composed music by James Horner gives us great definition of sound that is really nice and enjoyable, but mainly staying with the front speakers, but also enjoying a wide-breadth presence across the three main speakers. With the more up-tempo musical presentation, we find a little more positive energy, lots of instrumental clarity and depth. Heavier sound effects are minimal, except the building demolition at the start of the film, for example with lots of tossing of the debris into the back speakers, but fizzes out rather than offer some sort of prolonged present of weight one might expect with such a moment. Smaller little details, various crashes and clanks on a much smaller in scale, and sometimes offers some definition, but don't often stray very far from the centre speaker. Dialogue is very well defined, clear, with the centre-grounded speaker, and expertly prioritised for a film made in 1987.

Theatrical Trailer [1987] [408i] [1.37:1] [1:24] This is the Original Theatrical Trailer for the film ‘*batteries not included.’ This is such a shame that the trailer is not shown in the 1.85:1 aspect ratio, despite this it still presents to the audience the magic of the film they were going to see when it was released in the cinema in 1987.

Finally, ‘*batteries not included’ has left us a legacy that embodies good-spirited of totally movie magic. This beautiful film is very well thought out, that is built around a simple premise that becomes totally fantastical and serves to only reinforce core human values, with hopes and dreams thrown in for good measure. It is totally and brilliantly very well made, enjoying lots direction, with lots of twist and turn qualities and performances that accentuate its profound humanity. Universal Pictures Blu-ray release is sadly and disappointingly absent of any meaningful extras, which I am sure Universal Studios Home Entertainment must have in their vaults or even Steven Spielberg’s own private collection, but the video and audio presentation is still very nice and nothing short of a revelation for those who grew up watching the film like me, either at the cinema or when broadcast on the television and such a revelation over the inferior DVD presentation and is one of my all-time favourite film, I could watch time after time and still get very emotional each time I watch the film. Very Highly Recommended! 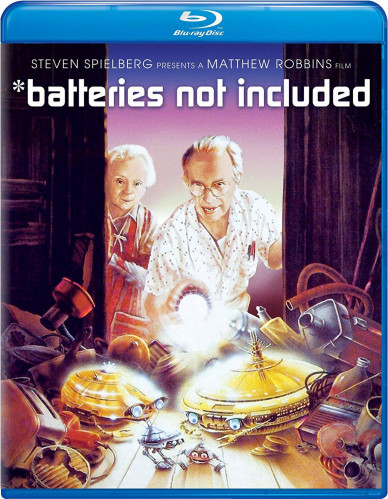 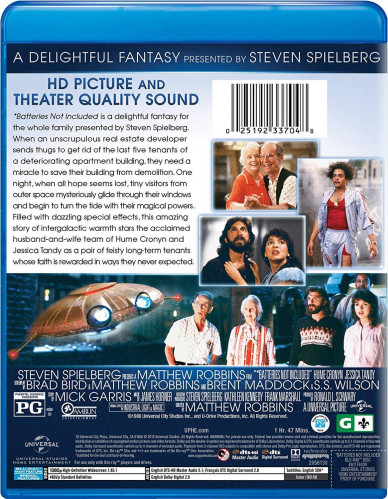