Celebrate the power of everlasting friendship with ‘BEACHES’ available for the first time on Blu-ray, featuring a new digital restoration. Academy Award® nominees Bette Midler for Best Actress 1991: ‘For The Boys’ and Barbara Hershey for Best Supporting Actress 1996: ‘The Portrait Of A Lady’ star in this funny and touching film from legendary director Garry Marshall.

When the irrepressible Cecilia Carol “C.C.” Bloom and the shy and proper Hillary Whitney first meet under the boardwalk, all the 11-year-olds have in common is the need for a best friend. Worlds apart in a lifestyle and location, their friendship ebbs and flows through a lifetime of highs and lows. From the boardwalk in Atlantic City to a beach house on the Pacific, ‘BEACHES’ will remind you what being a true friend really means. Relive every heart-warming moment on Blu-ray High Definition.

FILM FACT No.2: The film's theme song, "Wind Beneath My Wings" hit number one on the Billboard Hot 100 charts and won Grammy Awards for Record of the Year and Song of the Year in 1990. Despite generally negative reviews from critics, the film was a commercial success, grossing $59 million in the box office, and gained a cult following. A sequel, based on the novel “Beaches II: I'll Be There” was planned with Barbara Eden but it never got filmed. A musical stage adaptation has been written, based on the book by Iris Rainer Dart, with lyrics and book by Dart and Thom Thomas (book) and music by David Austin. The musical premiered at the Signature Theatre, Arlington, Virginia in February 2014. The musical was directed by Eric D. Schaeffer, with Alysha Umphress as Cecilia Carol “C.C.” Bloom and Mara Davi as Bertie White. The musical next opened at the Drury Lane Theatre, Oakbrook, Illinois in June 2015. Again directed by Eric D. Schaeffer, Shoshana Bean plays Cecilia Carol “C.C.” Bloom and Whitney Bashor plays Bertie White. The choreographer is Lorin Latarro, with scenic design by Derek McLane, lighting design by Howell Binkley, costume design by Alejo Vietti and sound design by Kai Harada.

Andrew's Blu-ray Review: When I had the Special Edition DVD of ‘BEACHES' back in 2005, my life was considerably different from what it is now. And today as I view this special Blu-ray version of the film, with that same cover art, I wondered if my opinion of this film will be the same, well I was proved wrong and have found it is a vast improvement of the inferior DVD release as it still has the same emotional ambience that only Ms. Bette Midler can deliver and it is still a big tear-jerker type film, which always happens when watch this film for the umpteenth time, but at the same time to me it's still the same beautiful film. I will say, the ending has far more of an impact on me now; however I find I'm far more susceptible to emotional manipulation by the watching this film.

The box office hit ‘BEACHES’ [1988] starring Bette Midler and Barbara Hershey was based on the 1983 novel of the same name by Iris Rainer Dart about the lasting friendship between two very different women. The free spirited but poor Cecilia Carol “C.C.” Bloom [Bette Midler] and the uptight aristocratic Hillary Whitney Essex [Barbara Hershey] meet as children in Atlantic City and form a lifelong bond that endures conflicts, boyfriends, marriages, babies, divorces and even death.

‘BEACHES' starts out by establishing the foundation of the eternal friendship between, Cecilia Carol “C.C.” Bloom [Miyam Bialik] and Hillary Whitney Essex [Marcie Leeds], a street-smart Atlantic City kid and an upper- crust child, respectively. Meeting under the boardwalk, they find they are kindred spirits of sorts, and thus start a relationship that spans the rest of their lives through letter writing, until both Bette Midler and Barbara Hershey become adults. Finally getting together again, and find their friendship is the only constant in their lives. The prologue, with brilliant work by Cecilia Carol “C.C.” Bloom [Miyam Bialik] age 11 years old and Hillary Whitney Essex [Marcie Leeds] age 11 years old, gives the film a smart-aleck attitude that helps overcome the more heartstring-pulling moments...for the most part.

From there on out, the two women find life to be a series of struggles, with them switching places, as Cecilia Carol “C.C.” Bloom [Bette Midler] life explodes into mega-success, and Hillary Whitney [Barbara Hershey] hits roadblock after roadblock. Through it all, they rely on their friendship to carry them through the challenges that love, marriage and family bring. The friendship is tested often, especially by the dreaded presence of men, but it's hard to believe that anyone in the audience has a doubt about what will happen in the end. ‘BEACHES’ often risks drifting into melodrama, but Ms. Bette Middler's irreverent presence keeps the movie on an even keel until the plot becomes too heavy to maintain buoyancy.

Using Cecilia Carol “C.C.” Bloom and Hillary Whitney Essex's flashback correspondence as the main method of progressing the story along, along with an in-the-now framing device, the film spans 30 years in two hours, which by any measure is moving at light speed. There are some problems with moving the story so quickly, in that the plot can seem unnaturally motivated. But within the structure of the plot, there's no other way the film could have advanced the story. By compressing the lives of these two women, the parallels between them are made obvious and meaningful.

While the story of these two women is the core of the film, Ms. Bette Midler's musical moments are some of the most entertaining portions of the film. From her character's start as a jazz singer to her award-winning performances, she gets the opportunity to show off her impressive range as a vocalist. I've always considered Bette Midler to be extremely good, based on her roles in ‘Ruthless People' and ‘Outrageous Fortune’ [which I wish they would release on Blu-ray] but ‘BEACHES' goes to show why she gets the respect she receives. Singing ability like hers and an amazing comic wit has combined to make her a true star.

At approximately the halfway point, the film loses its sense of humour and becomes like a sort of soap opera, but not a bad one, especially with Cecilia Carol “C.C.” Bloom speaks badly about at the time of the change. Life itself is too much for the girls, and the whole film becomes exactly what the first half seemed to strive to avoid. Ironically, it's that turn-around in the second half that has earned the film its fan base and massive reputation. It takes a heap of nurturing to make and keep a friend over the long haul of a lifetime. ‘BEACHES’ illustrates a few of the challenges, disappointments, and rewards of this worthwhile endeavour. With its mix of drama, comedy, and music, the film leaves behind a rainbow of delectable emotions for all ages.

Blu-ray Image Quality – Touchstone Home Entertainment presents ‘BEACHES’ with a very nice 1080p image transfer on this disc and is remarkably better than the mess that existed on the previous Blu-ray release and is enhanced with a wonderful 1.85:1 aspect ratio. That said, it still has some issues, as it's uneven in the handling of grain, with some scenes buzzing and others, mostly darker interior scenes later in the film, looking stunningly clean, to the point where they could have been shot this year. Everything has been given a polish, so the vast majority of the dirt and damage seen on the inferior DVD has gone with the rare exception of a spot or two. Fine detail has been vastly improved, though there's some softness here and there, and the colour has been made far more natural and warmer, even if it all looks a touch darker. At its best, it looks fantastic, while at its worst it's much better than the previous release. It's worth nothing that it appears that the image was opened up on all sides on this release, showing more in all directions. The aspect ratio 1.85:1 seems to be the same between the two, but the framing seems better on the new transfer.

Blu-ray Audio Quality – Touchstone Home Entertainment brings us this Blu-ray disc ‘BEACHES' with a 5.1 DTS-HD Master Audio mix is pretty front heavy, to the point where surround channels only really kick in when Midler sings. There is some occasional noticeable surround activity, especially the boardwalk scene is a good example, but even then, the bulk of the mix is tilted toward the front channels. There is also widely differing reverb and ambient recording effects quite noticeable in some of the post-looped material, with the van scene with Bette Midler and Barbara Hershey, especially when Bette Midler is in the bunny suit, one of the more obvious examples. In scenes like that one, the dialogue sounds overly tinny and boxy compared to the bulk of this track. Fidelity is generally very good, especially in the musical sequences.

Special Feature: Beaches Bloopers [1998] [480i] [1.37:1] [6:59] We get just over a six-minutes reel. Apparently created for use way back in 1988, and this one offers the usual goofs and giggles of what you view, mainly with the actors, though a narrator attempts at some humorous commentary as well. It's typical for its genre.

Special Feature: Mayim Bialik Remembers Beaches [2011] [480i] [1.37:1] [12:06] This is a very sweet reminiscence of her performance in the film ‘BEACHES.’ Mayim Bialik informs us that the film ‘BEACHES’ is so special to so many people and it was this movie that changed my life and catapulted me into working on sitcoms, which determined the course of my career and life. Mayim Bialik was just 12 when she spent four months auditioning to play Cecilia Carol “C.C.” Bloom, and   was pretty positive she wouldn't get the part of Cecilia Carol “C.C.” Bloom. Mayim Bialik says that the film was filmed in Coney Island, and it was hard to spend many hot days shooting in a "very hot and heavy wig." But she got to eat Nathan's hamburgers for lunch, and then take naps in her trailer during lunch. Mayim Bialik also revealed that she and her young co-star Marcie Leeds (who played Hilary, a role Barbara Hershey took over for the adult portion of the movie) are still good friends. Mayim Bialik is the current day star of ‘The Big Bang Theory’ at the time of this review.

Special Feature: Barbara Hershey Screen Test [1988] [480i] [1.37:1] [6:18] This shows us a scene in which Cecilia Carol “C.C.” Bloom and Hillary Whitney make up with each other as well as showing us a couple of subsequent scene sequences. Ms. Bette Midler works with Barbara Hershey in the test, so that makes the reel more interesting than it would otherwise might be.

Theatrical Trailers [2:12] The Blu-ray disc opens with trailers for ‘The Odd Life of Timothy Green’ [2012] and ‘Monsters University’ [2013]. These also pop up under Sneak Peeks along with clips for ABC TV series and Castle. We also get the trailer for ‘BEACHES' as well.

Finally, ‘BEACHES' is a wonderful warm hearted true classic, the kind of weepy film everyone likes to curl up with on a rainy Sunday for the stereotypical “good cry.” It's hardly worth debating the quality of the filmmaking, as it's secondary to the emotions involved for fans of this film. This Blu-Ray is a considerable improvement in terms of the visual quality, and though there are no changes in the contents from the now inferior DVD release, it offers a decent package of extras, thanks largely to Garry Marshall's audio commentary. If you are a fan and you have never owned the film ‘BEACHES’ well there is not likely to be a better upgraded Blu-ray disc version at this point in time and that is why it is a great honour to add this to my ever increasing Ms. Bette Midler Blu-ray Collection. Highly Recommended! 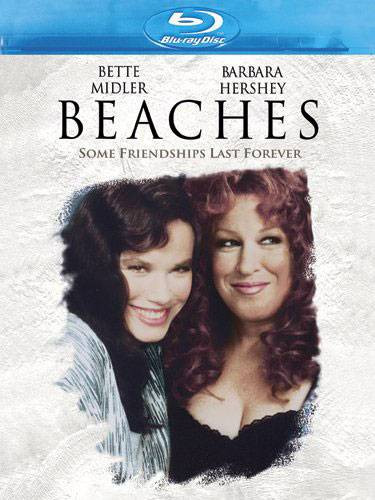 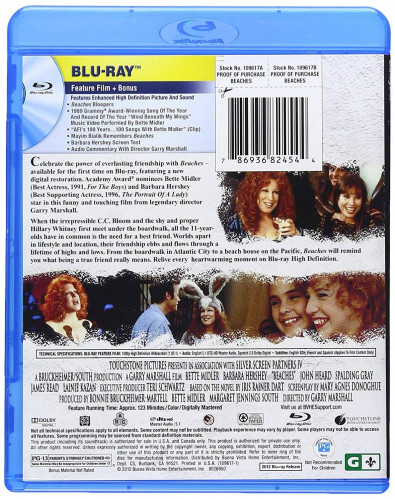