BEDKNOBS AND BROOMSTICKS [1971 / 2015] [Exclusive Limited Edition SteelBook] [Blu-ray] [UK Release] You’ll beWITCHED . . . You’ll beDAZZLED!  A Most Musical Adventure . . . BEYOND ANYTHING BEFORE! A Triumphant Blend of Live Action and Disney Animation!

Hold on tight for a magical, musical, fun-filled journey! When young Charlie, Carrie and Paul move to a small village during World War II, they discover their host, Miss Eglantine Price [Dame Angela Lansbury], is an apprentice witch! Although her early attempts at magic create hilarious results, Miss Eglantine Price successfully casts a travelling spell on an ordinary bed knob, and they fly to the fantastic, animated Isle of Naboombu to find a powerful spell that will save England!

FILM FACT No.2: Filming took place at the Disney studios in Burbank, California from early March to the 10th June, 1970. The coastal scenes featuring Nazi soldiers were shot on location at a nearby California beach. Additional scenes were shot on location in Corfe Castle in Dorset, England. Filming lasted fifty-seven days while the animation and special effects required five months each to complete. For the Naboombu soccer sequence, the sodium vapour process was used, which was developed by Petro Vlahos in the 1960s. Animator and director Ward Kimball served as the animation director over the sequence. Directing animator Milt Kahl had designed the characters, but he was angered over the inconsistencies in the character animation. This prompted Kimball to send a memo dated on the 17th September, 1970 to adhere to animation cohesiveness to the animation staff. Because of the heavy special effects, the entire film had to be storyboarded in advance, shot for shot, in which Lansbury noted her acting was "very by the numbers."

Andrew’s Blu-ray Review: Director Robert Stevenson’s ‘BEDKNOBS AND BROOMSTICKS’ [1971] marked quite an advance in quality and entertainment value on the earlier two Walt Disney musicals produced in the wake of the fabulous success of ‘Mary Poppins,’ ‘The Happiest Millionaire’ and ‘The One and Only,’ which were genuine, original family entertainment. Its score is more memorable, its stars are quite at home with singing and dancing, and the magic in its make-up, while not quite matching ‘Mary Poppins’ in thrills and originality certainly holds the attention and offer lots of giggles and glee.

Based on two novels by Mary Norton, “The Magic Bed-Knob” [1945] and “Bedknobs and Broomsticks” [1957], and is about the adventures of an apprentice witch and the three children she looks after during World War II. ‘BEDKNOBS AND BROOMSTICKS’ [1957] was a project first envisioned by Walt Disney when he first purchased the rights to “The Magic Bed-Knob” the year it was published. It would not become a film until five years after Disney's death.

Dame Angela Lansbury plays Miss Eglantine Price, a witch apprentice during World War II who has ambitions of helping England defeat the Nazis.  Much to her dismay she is forced to take in three orphans from London who is Charlie [Ian Weighill], Paul [Roy Snart] and Carrie [Cindy O'Callaghan]. That night, however, they spy her attempting to ride her first broom, side-saddle and “Technicall” say the instructions, “a witch is always a lady.” Miss Eglantine Price does a couple of barrel rolls, then a nose dive, and crashes, heap like, into a  hedge, whereupon the children decide to blackmail Miss Eglantine Price into serving them sausages and fries and into giving them pocket money as well. But soon the orphaned children immediately come to love and cherish Miss Eglantine Price for being a nice kind apprentice witch dedicated to helping Winston Churchill save England from the Nazi invasion.

Though her first spells create more laughs than magic, Miss Eglantine Price and the children soon find themselves swept away on board the fantastic flying bed. The four of them take off in search of the Professor Emelius Browne who runs the witch apprentice Correspondence school that Miss Eglantine Price is enrolled in.  What they find is a conman, Professor Emelius Browne, the head of the Correspondence College of Witchcraft, who is played by David Tomlinson and Miss Eglantine Price fears all hope is lost.  However, when they find the other half of a magical spell book in London, they fly off on an adventure, courtesy of a bed knob.

The loveliest part of the film and the section that can renew one's appreciation of the special gifts of the Disney people is the live-action-plus-cartoon sequence in Naboombu featuring, among other things, a tumultuous soccer game with David Tomlinson as referee, the rules are more a matter of royal decree, and a scuffling, baffling, riotously fun game ensues between all manner cartoon animals, that includes elephants, lions, bears, hogs, rhinos and cheetahs. We also get a wonderful an underwater ballet sequence in which Dame Angela Lansbury and David Tomlinson dance in slow-motion surrounded by cartoon fish. It recalls the best of Disney, going all the way back to the first Silly Symphonies cartoons. This is essential viewing, not only for nostalgia buffs but also for a whole new generation yet to be introduced to Miss Eglantine Price’s magic.

PORTABELLO STREET DANCE (uncredited) (Instrumental, arranged by Irwin Kostal from a melody by Richard M. Sherman and Robert B. Sherman)

BLOW THE MAN DOWN (uncredited) (Traditional) [Sung by Dal McKennon]

Blu-ray Image Quality – Walt Disney Studios Home Entertainment presents this film with a brilliant aspect ratio of 1.66:1 and is offered to us in stunning 1080p resolution encoded image. It’s a beautiful presentation of this classic film with sharpness excellent and colour wonderfully rich with realistic and appealing skin tones. If contrast occasionally gets extreme in trying to portray fogbound England, it’s not really detrimental to the final look of the film, and black levels blacks are deep and inky, with only a hint of crush in a few of the very darkest scenes, and fine detail being quite apparent. Lines are still intact and there appears to signs of jaggiest or compression artefacts. Even the look is VERY well replicated and rich. With this Walt Disney classic is presented in its original aspect ratio of 1.66:1, you get presented with a very slim black bar left and right of your TV screen. It may not be a 5 star restoration, but they left it alone which is a good thing and let the natural look of the film shine through, for the most part, I am very pleased with the results.

Blu-ray Audio Quality – Walt Disney Studios Home Entertainment equally presents us with a really wonderful 5.1 DTS-HD Master Audio sound mix that does justice to the delightful Oscar-nominated song scores, even if the ambient sound effects don’t get the wide spread or resonance through the soundstage that a modern musical film like ‘ENCHANTED’ would command. Dialogue and song lyrics have been expertly recorded and have been placed in the centre channel has some nice wallop to it, and certainly adds some nice density to the film. Ambient details are replicated nice, especially in the hustle and bustle of street market where they go to find the other half of the spell book. Overall a very pleasing audio track indeed.

Special Feature: Music and Magic: The Sherman Brothers [2001] [480i] [1:37:1] [20:41] A short but informative documentary on the 1971 Disney film ‘BEDKNOBS AND BROOMSTICKS’ [1957] and the contributors extol the virtues of the newly reconstructed version of the film mentioned in the special feature. But the documentary on the 1971 ‘BEDKNOBS AND BROOMSTICKS’ Walt Disney film which they discuss the making of the film, the origins of the songs, including  portions of two that were dropped in pre-production, the pre-release, and the 1996 reinstatement of those cut scenes. But what is mentioned is some the actual deleted songs that had to be deleted from the film and they were “A Step In The Right Direction;” “Nobody’s Problem” sung by Dame Angela Lansbury. We also get to hear several Original Demo Recordings, plus best of all the “Portobello Road Ballet” that was originally over 10 minutes long, but in the actual film, it was actually cut down to 4 minutes. Contributors include: Walt Disney (archive footage), Dame Angela Lansbury (Miss Eglantine Price), Scott McQueen, Richard M. Sherman (Composer), Robert B. Sherman (Composer), Robert Stevenson (Director) (archive footage), David Tomlinson (Mr. Emelius Browne) (archive footage), Ian Weighill (Charlie) (archive footage), Cindy O'Callaghan (Carrie) (uncredited) and Roy Snart (Paul) (uncredited). Director and Screenplay: Les Perkins. Producers: Clare Baren, Ivan Hall, Jeff Kurtti and Michael Pellerin.

Special Feature: Deleted and Extended Scenes [1971] [1080p] [1.66:1] [10:06] Here we get presented eight individual sequences, which includes “Captain Greer;” “Ulterior Motives;” “The First Supper;” “Letter from Professor Browne;” “Extortion;” “Travelling Spell;” “Substitutiary Locomotion” and “Matchmaker.” You can either watch each one individual or Play All.

Special Feature: David Tomlinson Recording Session [1971] [480i] [1:37:1] [1:10] Here we get to view a short rare snippet of David Tomlinson at a recording session for the film ‘BEDKNOBS AND BROOMSTICKS,’ which happened in April 1970. This 70-second clip shows David Tomlinson as he croons the last few bars of “Portobello Road” to a pre-recorded orchestra playback, with the guidance of arranger/conductor Irwin Kostal. For some strange reason, the last five seconds goes all silent.

Special Feature: Disney Song Selection [1971] [1080p] [1.66:1] [20:40] Here we are presented with the film’s six song sequences, which consist of “The Old Home Guard;” “The Age Of Not Believing;” “Eglantine;” “Portobello Road;”  “The Beautiful Briny” and “Substitutiary Locomotion.” Here they may be watched individually or Play All and you can also sing along with the song lyrics provided with subtitles.

Special Feature: The Wizard of Special Effects [2015] [1080p] [1:78:1] [8:06] Hosted by Disney Channel actress Jennifer Stone and looks at the differences between special effects done in the era of ‘BEDKNOBS AND BROOMSTICKS’ and today’s “The Wizards of Waverly Place” by interviewing Disney effects historian Les Perkins, visual effects historian Greg Kimble and visual effects supervisor John  Allison. They inform us about the visual effects for the film ‘BEDKNOBS AND BROOMSTICKS’ where Ub Eert Iwerks who worked for Walt Disney, perfected the Sodium Vapor Screen Process, (occasionally referred to as yellowscreen) and is a photochemical film technique for combining actors and background footage with the cartoon characters. We also get to compare this to more modern “Green Screen” visual effects techniques and all in all it is really good and fascinating information here, but the special feature usually feels more like a promo for Jennifer Stone’s Disney Channel series, who to my mind is a totally ghastly and obnoxious precocious child actress and one I am so glad I was not able to view Jennifer Stone on the Disney Channel every week.

BONUS: This Exclusive Limited Edition SteelBook Blu-ray UK Release  is absolutely stunning, because the SteelBook has a beautifully embossed front and you have inside some nice coloured images, so is well worth purchasing this alone, instead of the ordinary Blu-ray Cover.

Finally, fans of the classic and wonderful fun filled Walt Disney ‘BEDKNOBS AND BROOMSTICKS’ film, are going to be well pleased with this Exclusive Limited Edition SteelBook Blu-ray UK Release. It is so nice to go back and see one of Walt Disney’s live action films get the brilliant Blu-ray treatment, even if the extended cut isn’t included for those who would have wished to have been included in this Blu-ray disc. David Tomlinson is as always very cheery as he even is and the whole experience just brings one back to one’s childhood viewings of this classic Walt Disney film, but an even better bonus is seeing the wonderful Dame Angela Lansbury working her magic spell throughout the film. Now we can only hope that Walt Disney decides to delve into their deep pockets and pull out some more of those old live action classics. With a very nice stunning audio and video experience, and I cannot see why you shouldn’t make this a priority purchase, unless you really want to wait for the extended cut version. Like Dame Angela Lansbury, the film has aged well and retains all of its joyous magic experience. Highly Recommended! 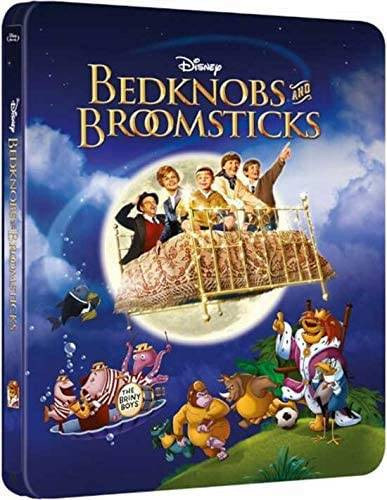 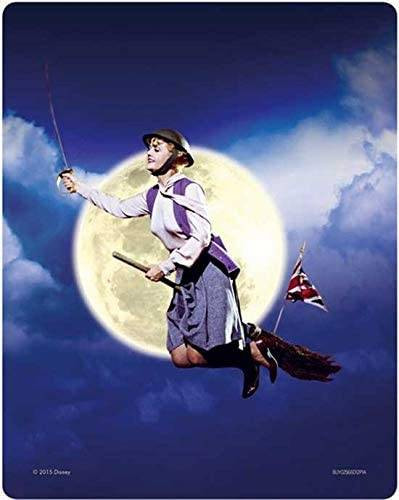