This amazing animated film follows an elderly Frenchwoman Madame Souza as she becomes involved in international intrigue when her Grandson Champion, a professional cyclist, is kidnapped and taken abroad. Madame Souza is accompanied by Champion's loyal and obese hound Bruno and embarks on a journey to find her Grandson Champion, and stumbles across unlikely allies in the form of three sisters who are veterans of the vaudeville stage. Tracking down Grandson Champion’s criminal captors, the quartet of old women use their wits to try and win the day.

FILM FACT No.2: The film ‘BELLEVILLE RENDEZ-VOUS’ was highly praised by audiences and critics for its unique style of animation. It was also screened out of competition (hors concours) at the 2003 Cannes Film Festival.

Andrew’s Blu-ray Review: ‘BELLEVILLE RENDEZ-VOUS’ [The Triplets of Belleville] [2003] is a stunning Sylvain Chomet’s imaginatively surreal animated film, and is also a very French quirky humour and definitely a whole original affair. Combining the Tour de France with the Mafia, and a charming personal journey situated within a glowing fictional megacity; the writer/director’s animated film reminds us of the qualities cinema can conceive.

There is one scene at the start of the film which is in black-and-white and we get the first glimpse of the singing triplets in their prime in the 1920’s/1930’s and includes Ms Josephine Baker, the beautiful African-American chanteuse who charmed Paris in the late 1920’s. True to the French attitude about history, the Josephine Baker character briefly dances onto the stage, animated in a “piccaninny style” which early Disney films were known for. In current copies of Disney's Fantasia and others, these characters have been edited out because of how they reinforce early 20th Century racial caricatures. The French attitude about such things was very different from the American attitude and it is probably right to see this brief scene as a tribute to Baker and a mocking parody of Disney. However, young children may not understand this or even recognize the racial overtones. A gentle explanation will suffice if it becomes an issue.

‘BELLEVILLE RENDEZ-VOUS’ [The Triplets of Belleville] offers the world of animation something obscure and very different to the likes of Disney or PIXAR; and much more in tune with the poetic openness of Studio Ghibli creations. The narrative presents a boy named Champion, who lives with his elderly guardian Madame Souza and her lazily loyal mutt Bruno; as he competes in the gruelling Tour de France. What ensues is the kidnapping of this skeletal rider by cuboid-shouldered mafioso, who take him and two other zombified cyclists to the city of Belleville. Madame Souza is accompanied by Champion's loyal and obese hound Bruno’s unyielding sense of love drives them in chase of the chain-smoking villains, which provides the film with its most entertainingly serene visual sequence and is portrayed as a pseudo-silent movie

‘BELLEVILLE RENDEZ-VOUS’ [The Triplets of Belleville] art direction and visual design are colossal factors of its overall success. Due to the minimal dialogue throughout this adventure, the focus is drawn more towards the occasionally expressionistic character appearances, 1930’s music and beguiling locations. Director Sylvain Chomet fires substantial grotesquery’s into the frame, this includes most pedestrian characters carrying a casual obesity; alongside competition cyclists mirroring starving rage-creatures. These elements are unique and impressively executed by the team of animators, who supposedly spent five years getting this project to the screen. The character of Champion is one of animation’s great inventions, his Herculean-sized lower body and oddly vampiric image promotes certain uneasiness about him; what’s his story? Do we sympathize with him?

Director Sylvain Chomet’s vision could be seen as a slight parody of French national stereotypes; being a Frenchman himself he employs a comical edge to this personal work, with many examples available. Take the Tour de France for instance, the director’s onscreen sportsmen are portrayed with a lethargic, ghoulish energy that appears to destroy any enjoyment from this famous competition. One glorious scene features an elasticated, theatrical waiter serving the Mafia boss and his black-clad henchmen; dressed with a ravenous grin and camp impatience. Madame Souza stumbles across the acclaimed Triplets of Belleville on her desperate travels; whom provide plenty more of the film’s national very eccentric lady trio, and look out for the “frogging” scene and how the demented trio come up with memorable ways to serve this amphibious frog delicacy.

As the bespectacled grandmother Madame Souza continues her search for Champion, her run-in with the Triplets aids her sluggish progress; resulting in a delightfully dark yet underwhelming climax. Director Sylvain Chomet’s  melancholic film emboldens the notion of mortality and even how animated characters are ultimately, just like us. ‘BELLEVILLE RENDEZ-VOUS’ [The Triplets of Belleville] is an incomparable phenomenon, there are moments of cold longing but also  very adult-orientated ingredients chucked in for good measure and it is also a wonderful strangely comforting animated film to experience.

‘BELLEVILLE RENDEZ-VOUS’ [The Triplets of Belleville] is a very beautiful alternative to American animation; with one important scene to be aware of. The quality of animation is great and it is in a style that you won't see coming from an American studio. No need for any knowledge of the French language; or English for that matter, because the majority of the time there is no dialogue, just pantomime. Young children might not be used to a film without dialogue; but they will eventually realize that they can understand just as much of the story by watching the images.

There's so much to relish here: Obese hound Bruno's black-and-white dream sequences, the unconventional use of hand grenades to catch frogs, and particularly the operatic ocean crossing on a pédalo. It is also up to Grandmother Madame Souza and Champion's beloved obese hound Bruno to perform a daring rescue, although they can rely on assistance from the elderly Belleville Sisters, a song-and-dance trio who once performed with Fred Astaire.

Also here we get to relish a very sarcastic image where we see in this animated film a sending up the eating habits of North Americans (whose Statue of Liberty brandishes a hamburger) as well as the French predilection for frog-related dishes, the director manages to pay homage to such cultural icons as the guitarist Django Reinhardt and French comic Jacques Tati. The latter, one feels, would have approved of the resourceful way a vacuum cleaner is used to make music.

The other scene which especially American audiences will react to quite differently from the French would be a scene of quasi-nude dancers. So let us be clear, these are still animated characters and the French just don't share American attitudes about nudity. Honestly, I sincerely doubt that children would even notice. So sit back and enjoy something really special and unique. But please wait until the finish of the end credits, as you will get a short little bonus related to the film.

Blu-ray Image Quality – Curzon Artificial Eye presents us the animated film ‘BELLEVILLE RENDEZ-VOUS’ [The Triplets of Belleville] with an outstanding and flawless 1080p image and shown in the proper 1.66:1 aspect ratio. The print is very clean and pristine. Detail is outstanding and the vibrant colours pop out during the cycling scenes. The film incorporates 3-D animation direction and you will notice a lot of three-dimensional depth to the images. The animated film’s overture contains vintage black-and-white images that recall the early talkies and includes white tramlines to give the scene a nostalgic tone and there are some sepia images to add to the effect of the animated film. The hand-drawn animation gives the primarily dialogue-free ‘BELLEVILLE RENDEZ-VOUS’ [The Triplets of Belleville] a deliberately antiquated visual style, and director Sylvain Chomet relishes caricaturing the body shapes of its characters – whether it's  the overly muscular thighs and protuberant nose of Champion, or the grotesquely obese residents of Belleville. Please Note: Playback Region B/2: This will not play on most Blu-ray players sold in North America, Central America, South America, Japan, North Korea, South Korea, Taiwan, Hong Kong and Southeast Asia. Learn more about Blu-ray region specifications.

Blu-ray Audio Quality – Curzon Artificial Eye brings us the animated film ‘BELLEVILLE RENDEZ-VOUS’ [The Triplets of Belleville] with a 5.1 DTS-HD Master Audio experience that has excellent balance across the sound spectrum. There was also some amplification in the rears when the squeezebox played or a song performed. The animated film doesn't really contain any dialogue save for two lines of intelligible dialogue but you do get some dialogue when the triplets sing.

Finally, ‘BELLEVILLE RENDEZ-VOUS’ [The Triplets of Belleville] may not be for everyone, but I truly love this animated film from France. It is a wonderful example of “silent” film.  If you enjoy animation because it tells different stories in unique ways with distinctive characters and a lots of detail in every scene then it is definitely worth watching. It really is a work of art. With the film might be bordering on the grotesque a lot and at times crossing a line with its imagery it makes it hard to recommend to everyone, but for me, people should watch this amazing animated film and appreciated all the hard work that went into producing this outstanding and very eccentric animated film. Very Highly Recommended! 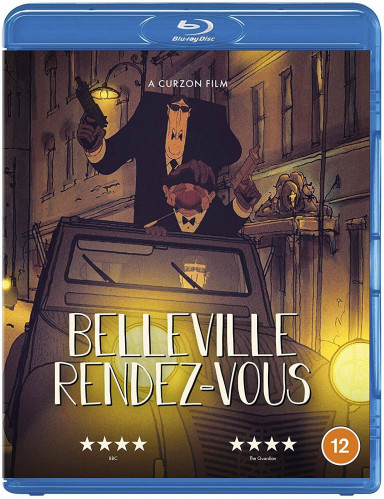 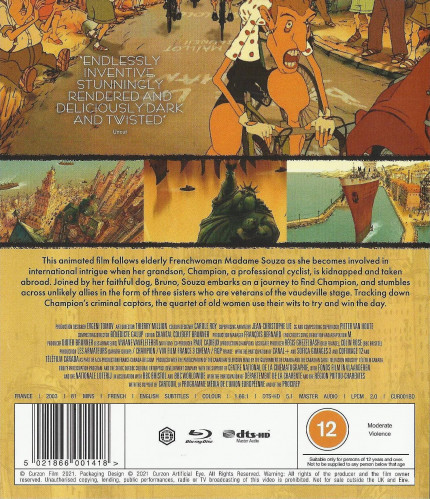