Bette Midler [‘Outrageous Fortune,' ‘Ruthless People' and ‘Down and Out In Beverly Hills'] and Lilly Tomlin [‘All of Me' and ‘9 To 5'] are the first ladies of laughter. Star in this critically acclaimed box office hit about two sets of identical twins that are mismatched at birth. Forty years later, their paths cross amid the hustle and bustle of Manhattan, and the result is unrestrained pandemonium. New York's opulent Plaza Hotel is the setting for a wildly hilarious, classic case of mistaken identities, split personalities, and double trouble! With the unparalleled comedic talents of Bette Midler and Lilly Tomlin, two's company and four's a riot!

FILM FACT: The film was originally written for Ms. Barbra Streisand (Ms. Bette Midler's role) and Ms. Goldie Hawn (Ms. Lily Tomlin's role). The plot is a coincidental and playful combination of three previously recognizable stories: Aesop's Fables like “The Town Mouse” and the “Country Mouse,” Mark Twain's “The Prince and the Pauper” and Shakespeare's “Comedy of Errors.” The production company couldn't get the rights to film at the actual Plaza Hotel in New York City, so it had the hotel recreated on sound stages. To recoup construction costs, Disney produced a sitcom called “The Nutt House” around it and it was a massive expensive flop. Jim Abrahams said he staged one of the boardroom scenes based on an experience he had when a large agency used many employees to get him to sign with them. Ms. Bette Midler received an American Comedy Award in the category Funniest Actress in a Motion Picture for her performance in 1989.

Andrew's Blu-ray Review: ‘BIG BUSINESS’ [1988], directed by Jim Abrahams, is a fine example of the comedy releases that we saw in the late 1980s. The comic timing which was successfully delivered by Bette Midler and Lily Tomlin is later developed in Jim Abrahams’ directorial film series ‘Naked Gun’ and ‘Hot Shots.’ The concept behind Big Business was loosely based on Shakespeare “The Comedy of Errors,” being a farcical comedy about two sets of identical twins and their mistaken identify.

Sometime in the 1940s, wealthy New Yorkers Hunt Shelton [Nicolas Coster] and his pregnant wife Binky Shelton [Deborah Rush] are driving through the country, when Binky goes into labour. She demands to find the nearest hospital, which happens to be in the rural town Jupiter Hollow, West Virginia. The main industry there was Hollowmade Furniture, which also owns many services in town including the hospital. Rather than wait around for a room, the Sheltons buy Hollowmade Furniture so Binky Shelton can give birth. At   the same time, Garth Ratliff [J.C. Quinn] and Iona Ratliff [Patricia Gaul] are expecting a baby; she is taken to the same hospital. After both mothers give birth to identical baby girls, a harried nurse accidentally puts one of each set of twins with the wrong mother; both are given the names Sadie Shelton / Sadie Ratliff and Rose Shelton / Rose Ratliff.

Flash forward to the 1980s, we find Sadie Shelton [Bette Midler] is the tough-as-nails, heartless CEO of Moramax, a large New York-based conglomerate; her flaky sister Rose Shelton [Lily Tomlin] is the vice-president. When Sadie Shelton announces plans to sell Hollowmade Furniture to  Italian investor Fabio Alberici [Michele Placido], the folks in Jupiter Hollow are up in arms. Rose Ratliff [Lily Tomlin], who works at the factory, plans to go to New York to put a stop to it, while her sister Sadie Ratliff [Bette Midler], who wants more than what rural life has to offer, is eager to take a bite out of the Big Apple. When they reach New York, they end up in the Shelton sisters limo, sparking a string of misunderstandings and mishaps, entangling two gay Moramax assistants Graham Sherbourne [Edward Herrmann] and Chuck [Daniel Gerroll] who have to find the Ratliff sisters, and the men in the ladies lives are Roone Dimmick [Fred Ward], Dr. Jay Marshall [Michael Gross] and Michael [Barry Primus].

While the film is well-constructed and often hilarious, the plot of ‘BIG BUSINESS’ is improbable as they come. But when something works, it just does, and this film works well in no small part thanks to the efforts of its two stars and its director. Ms. Bette Midler, in her fourth film for Touchstone Pictures after ‘Down and Out in Beverly Hills,’ ‘Ruthless People’ and ‘Outrageous Fortune’ and Lily Tomlin have exceptional chemistry in both of their respective roles as well as a wonderful way with the snappy one-liners they've been given; while the idea of Ms. Bette Midler as a corn-fed country girl may be a bit of a stretch on paper, she makes Sadie Ratliff's desire for a more lavish urban lifestyle shine through. Director Jim Abrahams, who directed Ms. Bette Midler in ‘Ruthless People' and keeps the pace sprightly and the tone light, and preventing the film's anti-corporate themes from becoming ham-fisted. The supporting cast does a fine job of supporting the stars, especially Fred Ward, who has a very funny scene where his character, professional mini-golfer Roone Dimmick, is clueless to the real nature of the two Moramax assistants personal relationship, as well as a touching one where he explains exactly what makes Jupiter Hollow worth saving, but it's Ms. Bette Midler and Ms. Lily Tomlin's show from beginning to end. What will happen to these twins when they finally meet face to face...? All I have to say is get ready for some BIG laughs from the film ‘BIG BUSINESS.’

Overall, I had a great time revisiting the film. ‘BIG BUSINESS’ is just as funny the first time I saw it. The film will certainly have plenty of critics, but the film was never meant to be taken seriously. The film is harmless fun and makes for a very funny experience even today. Built on a solid script the films hilarious humour performance delivery was spot on, special effects were flawless and the music sets the scenes perfectly, in this must revisited 1980s comedy classic.

PENNIES FROM HEAVEN (Written by Johnny Burke and Arthur Johnston)

Blu-ray Image Quality – Touchstone Pictures and Mill Creek Entertainment present film with a really lovely 1080p image transfer and its original aspect ratio of 1.85:1 is superb. Having reviewed a number of 1980s comedies lately, I have come to accept the fact that they will never offer the visual splendour of Disney animated classics, Technicolor extravaganzas, or widescreen roadshow musicals and epics, and I have adjusted my expectations accordingly. The transfer accurately reflects the way the film has always looked, with average contrast, a subdued colour palette, warm flesh tones, and few bright primaries. There is also a fair bit of grain, which is heavier in some shots than others; thankfully, Mill Creek has left it alone and not subjected it to DNR [Digital Noise Reduction] or Edge Enhancement that could make things worse. I also could not find any banding or compression artefacts. Please note, that on the back cover it informs you that the Blu-ray is Region A/1; well that information is 100% wrong, as it is actually an All Regions Blu-ray disc as stated in the above information.

Blu-ray Audio Quality – The film's Dolby Stereo soundtrack is represented here as a 2.0 DTS-HD Master Audio track. The audio really comes alive thanks to Lee Holdridge's score, with active use of the surrounds and a good balance of low, medium, and high frequencies; strings and horns have a real kick to them, as do the drum machines, which instantly gives away the film's 1980s origins. Dialogue is clear and intelligible, and there are few anomalies save for the inherent use of Benny Goodman's 1938 recording of “Sing Sing Sing (With a Swing).”

Blu-ray Special Features and Extras: Here again we get no inclusion of Special Features or behind-the-scene footage or even interviews with cast and crew, shame on you Touchstone Pictures and Mill Creek Entertainment.

Finally, this is a fine release from Touchstone Pictures and ‘BIG BUSINEES’ is a totally raucous romp that gives Ms. Bette Midler and Ms. Lily Tomlin a chance to show off their comedic talents; they take that chance and get a huge payoff from their efforts. Despite its bare-bones non-existent special features status, Touchstone Pictures has made it available at a nice low price that instead I would of paid a higher price if special features had been included, but despite this it is still a worthwhile purchase and an upgrade would have been really worthwhile, especially for big fans of both female actors. That is why I have loved this film, especially when it originally was released in 1998 and have never stopped loving it. What I also love is the way it was so cleverly done with the trick photography of both Ms. Bette Midler and Ms. Lily Tomlin and I bet both actors got very confused half the time and now having it in the Blu-ray format, has really brought the film to its best level ever, as both main female actors are true comedians of their craft, that is why it is a great honour to add this to my ever increasing Ms. Bette Midler Blu-ray Collection, but very sad there was not any kind of extras or especially the films Theatrical Trailer. Highly Recommended! 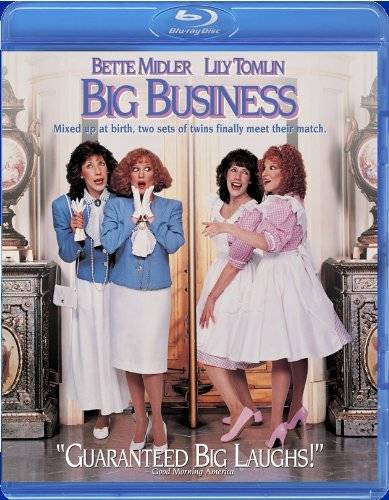 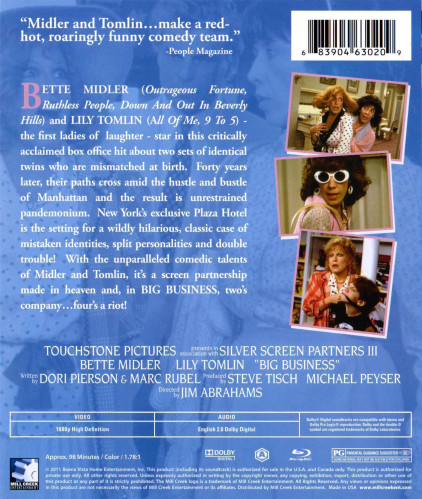