With 13 BAFTA® nominations, ‘BILLY ELLIOT’ is a heart-warming tale of an 11 year old coal miner's son Billy Elliot [Jamie Bell] in the North of England, whose whole life is forever changed when he stumbles upon Mrs. Wilkinson's [Julie Walters] ballet class during his weekly boxing lesson. Before long, he finds himself immersed in ballet, demonstrating a raw talent never seen before and reaching for a dream that changes the lives of everyone Billy touches.

FILM FACT No.2: Lee Hall developed ‘BILLY ELLIOT’ from his play “Dancer,” which premiered as a rehearsed reading in 1998 at the Live Theatre in Newcastle upon Tyne. He was heavily influenced by photographer Sirkka-Liisa Konttinen's book “Step by Step,” about a dancing school in nearby North Shields. Writing in 2009, Lee Hall said that "almost every frame of ‘BILLY ELLIOT’ was influenced by “Step by Step” ... as every member of the design team carried around their own copy." Due to Easington Colliery's pit closure in 1993, the mining scenes were filmed at the Ellington and Lynemouth Colliery in Northumberland, with some filming in Dawdon, Middlesbrough and Newcastle upon Tyne. ‘BILLY ELLIOT’ was originally released at the 2000 Cannes Film Festival under the title Dancer. It was later decided to re-title the film Billy Elliot to avoid confusion with ‘Dancer In The Dark,’ another film at Cannes Film Festival that year. ‘BILLY ELLIOT’ was theatrically released on 29th September, 2000 by Universal Pictures and Focus Features.

Andrew's Blu-ray Review: If we could turn back the clock eleven years, we'd see that there was much talk of ‘BILLY ELLIOT’ and a possible mention nod for Best Picture. That never happened, as much as Universal would have liked it to. The film seemed to follow a certain formula, that's usually a shoo-in for a “hi” in films, and that was the story of one Billy Elliot [Jamie Bell]. The story takes place in Northern England, a blue-collar town that is currently in the midst of a coal workers strike. They are striking against their union and in the meantime have nothing better to do than taunt and throw eggs at the “scabs” meaning, the people who were working at the coal mine while the strike is going on. Billy lives with his father, brother and Grandmother in their house. The Dad, Jackie [Gary Lewis], and Brother, Tony [Jammie Draven] both are both currently unemployed and are part of the mob that is attacking the scabs on a daily basis. On top of all this, the family has just lost their mother (it never says how) and is coping with the death and her loss in their own ways. We see the town in many ways, and by the end we're used to seeing armed guards with Plexiglas shields line the streets. But all that is just the background. You see... ‘BILLY ELLIOT’ is all about the ballet!

Unlike people in America, where the children tend to play Basketball, Baseball or English Football, and not that horrible “American Soccer” statement, and in England, and sports like Boxing, Wrestling and Soccer are also very popular in England. As a daily activity, Billy goes down to the local gym where he boxes, or at least tries to and his mind is clearly elsewhere. Due to the economic status of the town, the girl's ballet class has been moved to the other half of the gym where Billy and the other boys go to box. After class one day, Billy's curiosity gets the best of him and he starts to watch the girls do their ballet. He is enthralled with it and starts to go on his own time, still under the guise of boxing mind you. As he is more and more taken with ballet, his teacher, Mrs. Wilkinson [Julie Walters] sees something special in him and decides that his “gift” might best be expressed at the Royal Academy of Ballet located in London. Up until now, Billy had been doing a good job of keeping his ballet “secret” from his unsupportive brother and father. However, upon Mrs. Wilkinson's visit to Billy's house, they all learn the truth and what Billy has really been doing.

It's at this time when things start to change for Billy Elliot. His father, sometimes abusive, and certainly very unsupportive of most everything anyone does, has a change of heart. He swallows his pride and becomes a scab to get money to pay for a trip for Billy to go to London. It's also at this time when the film really takes off. ‘BILLY ELLIOT’ is a very odd, strange film. Some of the subplots don't seem to make sense to me. Billy and Mrs. Wilkinson's daughter seem to be interested in each other, yet it's never explored. Billy's friend, Michael, is another strange child who Billy walks in on him dressed up in his sister's dresses and wearing makeup. We later find out that he's gay, or as they say...that insulting word a “poofter.” Still, ‘BILLY ELLIOT’ has those certain areas of it that liken it to films like ‘The Karate Kid’ or ‘Rudy.’ The film is set in England and I suspect for the Americans the dialects are so thick that it takes a bit of listening to make out everything that's said, so it is best to put up the Subtitles. Still, the underlying theme is there and that's what makes ‘BILLY ELLIOT’ well worth watching.

CHILDREN OF THE REVOLUTION (Words and Music by Marc Bolan) [Performed by T. Rex]

GET IT ON (Words and Music by Marc Bolan) [Performed by T. Rex]

I LOVE TO BOOGIE (Words and Music by Marc Bolan) [Performed by T. Rex]

Blu-ray Image Quality – I can remember watching the ‘BILLY ELLIOT’ film on a standard inferior DVD and now on this brilliant Blu-Ray package and being thoroughly impressed with the transfer. The opening sequence looks even better on Blu-Ray and the 1.85:1 aspect ratio transfer is certainly a step up (or definitely a leap?) in quality from its inferior PAL DVD counterpart. I'd forgotten how dull some of the scenes look, though it's not a fault of the transfer, rather just the grey skies in Northern Ireland in general. There are still a few specs of dust and grain in a few selected scenes, namely the outdoor shots, but by and large Universal Pictures has given this a definite royal treatment.

Blu-ray Audio Quality – Though the film ‘BILLY ELLIOT’ has received an upgrade in the audio department, it still sounds a bit on the shallow side. This new 5.1 DTS-HD Master Audio sound mix gives a bit more clarity to the vocals, though the thick Irish accents do tend to prevail and take front and centre. The film isn't a total loss, however, Billy's statement of “I like to boogie...” sequence does still resonate throughout and really injects a bit of much needed depth into the film, speaking in terms of audio, of course. Surrounds are used, though not very often.

Special Feature: The Real ‘BILLY ELLIOT’ Diaries [2005] [1080p] [1.76:1] [20:28] Here is a portrait of the three boys playing Billy Elliot on stage and they are George Maguire, James Lomas and Liam Mower. It shows them at home and describes the audition process. Contributors include: Jimmy Carr, Stephen Daldry, David Furnish, Sir Elton John and Ashley Lloyd.

Special Feature: From Screen to Stage [2000] [1080p] [1.76:1] [19:26] Covers the process of converting the story into a musical, including interviews with Stephen Daldry, Lee Hall, who wrote the book and lyrics for the stage show and Sir Elton John, who wrote the music.

Special Feature: ‘BILLY ELLIOT’ Making of Breaking Free [2001] [1080p] [1.76:1] [21:35] Your heart sinks, as it begins with a quote-heavy saccharine narration that begins “Once in a while there comes a movie...” Fortunately it gets better than that, with some worthwhile interview clips from Stephen Daldry and others. For those who weren't around in 1984 Britain, it does give you enough information you need to know about the miners' strike. Ardent Thatcherites will certainly disagree, but I suspect they won't be watching this film anyway. Still less will they be lining up for a musical with a song like “Merry Christmas Maggie Thatcher” in it. This is the only extra carried over from the original DVD release. It betrays its age by the fact that Stephen Daldry's hair seems to have gone completely grey in the last five years. Contributors include: Jamie Bell, Julie Walters O.B.E., Jonathan Finn, Gary Lewis, Greg Brenman and Peter Darling. Narrated by Brent Selzer.

Special Feature: The Music: Shows each musical number in the film, with a commentary from Stephen Daldry on how the music was chosen. T.Rex was in Lee Hall's original script, though songs like “London Calling” and The Jam's “Town Called Malice” were added in editing. Each musical number can be played separately, but there is a “Play All” function. Stephen Daldry gives a very lucid audio commentator, so it's a pity that he hasn't provided one for the feature itself. All the extras are in 1.37:1 aspect ratio, with extracts from the film in non-anamorphic 1.85:1 aspect ratio.

Special Feature: Extended and Deleted Scenes with Director's Audio Commentary [2000] [1080p] [1.76:1] [5:40] There are three subdivided sections and they are as follows: Billy's Story [9:39], Tony's Story [7:17] and Dad's Story [5:35]. The middle section indicates that Jamie Draven's performance as Tony has been hampered to some extent by pre-release cutting, which Stephen Daldry acknowledges in his audio commentary. There are also three extended scenes.

Finally, the ‘BILLY ELLIOT’ film, well what can I say and that is it has danced its way into my heart. I laughed, I cried, and I did all the god-awful things typically associated with generic film-critic quotes. But Stephen Daldry's Adult rated film, Oscar-nominated coming-of-age jig isn't at all what I expected, and I suspect it won't be what most newcomers expect either. Funnier, darker, more sobering and more poignant than your average puppet-strings tear-jerker, its portrayal of a struggling family, an out-of-work widower and a bright-eyed boy who dares to dream a dancer's dream is quite the moving film. The fact that ‘Erin Brockovich’ was nominated for Best Picture over ‘BILLY ELLIOT’ still rubs me up the wrong way and totally insulting. Ah well, that is life. Universal Pictures Blu-ray release is worth the cost of admission, despite a so-so video presentation and a single extra. This is a film that, despite whatever you may think going in, deserves an audition in your home theatre. Give it a shot and see just see how difficult it is to resist its charms, which is why I have loved this film so much ever since I viewed on the British Television, especially when I was actually around at the time when the 1984 – 1985 Miners' Strike was in full swing and seeing this film brings it all back, especially with the struggle between the Prime Mister Margaret Thatcher and the NUM [National Union of Mineworkers] Union Leader Arthur Scargill and the film really shows the hardship the miners went through and Billy Eliot's emotional struggle with his strong willed heterosexual family. The film builds nicely in a pace over the course of the 1 Hour 51 minutes to a rapturous finale at the Royal Ballet auditions, topped off with a rousing emotional rollercoaster that will have audiences fumbling for their tissues and cheering in the aisles at the same time. Stephen Daldry's direction is flawless, energising the dance sequences, choreographed brilliantly by Peter Darling, and catching its breath during the sequences between Billy and his family. This is a total triumph. And that is why it is a great magical honour to add this to my ever expanding Blu-ray Collection. Highly Recommended! 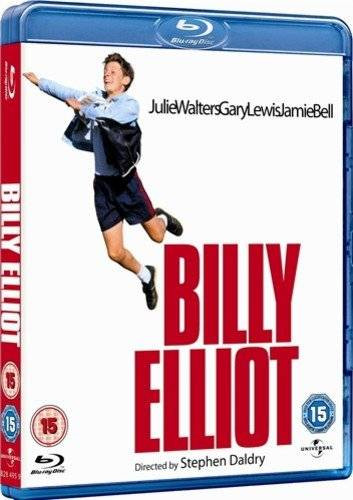 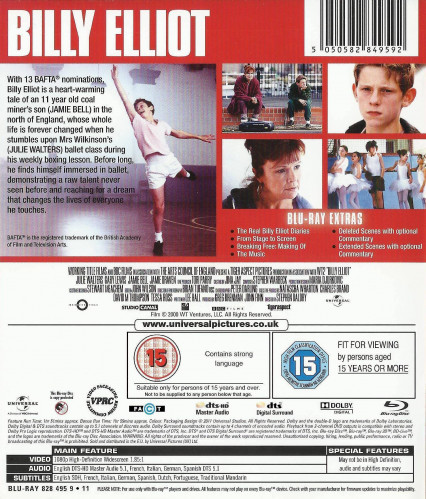