Mel Gibson and Goldie Hawn team up in this non-stop-action comedy directed by John Badham.

Hiding under the FBI Witness Protection Program, Rick Jarmin [Mel Gibson] gets nervous when old flame Marianne Graves [Goldie Hawn] recognises him. But before he can assume a new identity, the man he put in jail by Eugene Sorenson [David Carradine] and is released and comes to pay his respects.

Rick Jarmin and Marianne Graves find themselves thrown together on an exhilarating cross-country scramble, barely evading the gangsters, police and an amorous veterinarian Rachel Varney [Joan Severance]. Their whirlwind travels eventually lead to an unforgettable climax in an elaborate zoo exhibit. A rare rollercoaster of a movie which will keep you on the edge of your seat.

FILM FACT: ‘BIRD ON A WIRE’ was shot mainly in British Columbia, Canada. The title refers to the Leonard Cohen song "Bird on the Wire." The alley motorcycle chase scene was filmed in Victoria's Chinatown, in Fan Tan Alley.

Andrew’s Blu-ray Review: ‘BIRD ON A WIRE’ [1990] Rick Jarmin [Mel Gibson] helped to convict a corrupt drug dealing DEA agent Eugene Sorenson [David Carradine]. In doing so he is forced to go into the witness protection program severing all connections with his love ones.

Jump forward 15 years and Eugene Sorenson is finally released from prison putting Rick Jarmin’s life in danger once more. Rick Jarmin is now working at a garage when his former girlfriend Marianne Graves pulls into the Gas station and recognises him. Marianne Graves had been lead to believe that he had been killed in a plane crash 15 years ago.

Rick Jarmin now faces a problem having been recognised and contacts his handler to arrange another move within the witness protection program. However while waiting for his move his is paid a visit by both Eugene Sorenson and ex-girlfriend Marianne Graves and all hell breaks loose.

The film is directed by John Badham with the cinematography handled by Robert Primes. Fast paced action and comedy means there is never a dull moment. There is plenty of gunfire, explosions and car/bike chases. The music is provided by Hans Zimmer and the score is a good mix of action and comedy and works very well.

The acting is outstanding which is what makes ‘BIRD ON A WIRE’ so entertaining. Mel Gibson and Goldie Hawn provide plenty of laughs along the way; make no mistake this film plays to both of their strengths.

Whatever you think about Mel Gibson you cannot argue with his screen presence and he is very watchable in ‘BIRD ON A WIRE.’ You could argue he plays a toned down version of Martin Riggs but, he also shows off his more comedic side. Without giving it away, one particular scene where he camps it up had us grinning from ear to ear.

I’ve always had a soft spot for Goldie Hawn (I sure I’m not alone) and she does a decent job in the role. She possibly plays the hysterical victim a little bit too much, screaming her way from one scene to another but, there is no denying that her and Gibson have real chemistry and enjoy their time together. In fact both leads look fantastic and have a lot more charisma than some of the modern romantic movies I’ve watched recently. There is also a good supporting cast with David Carradine, Bill Duke, Stephen Tobolowsky and the lovely Joan Severance.

‘BIRD ON A WIRE’ isn’t going to win any kind of awards, but it is a very laugh a minute bonkers type of film, and if you definitely looking for a fun roller coaster film with likeable good looking lead characters then you won’t be disappointed.

BIRD ON A WIRE (Written by Leonard Cohen) (Produced and Arranged by David A. Stewart) [Performed by The Neville Brothers]

Blu-ray Image Quality – Universal Pictures and Fabulous Films presents us the film ‘BIRD ON A WIRE’ with a 1080p encoded image and an equally nice looking 2.35:1 anamorphic aspect ratio. Visually, the image is really good with only the occasional dust mark and speckle. There is a touch of grain visible now and again, but the colour saturation is really good and there are no signs of artefacts or other compression problems. So all in all, this is a brilliant visual presentation. Please Note: Playback Region B/2: This will not play on most Blu-ray players sold in North America, Central America, South America, Japan, North Korea, South Korea, Taiwan, Hong Kong and Southeast Asia. Learn more about Blu-ray region specifications.

Blu-ray Audio Quality – Universal Pictures and Fabulous Films brings us the film ‘BIRD ON A WIRE’ with just a standard 2.0 DTS-HD Master Audio experience. Dialogue is very straightforward and very clear throughout the film. The music soundtrack comes over very well, and especially with the sounds of the vehicles, especially the motorcycles roar of the engine is easily distinguishable.  So all in all, this is a really excellent audio experience.

Special Feature: Production Notes [1990] [1080p] [1.78:1] [4:00] ‘BIRD ON A WIRE’ was filmed on location in Vancouver and Victoria, British Columbia, with arial sequences shot in neighbouring Washington, A massive indoor zoo set was constructed at Vancouver’s Bridge Studios for the movie’s climatic confrontation. As producer Rob Cohen pointed out, “There have been other films with car chases, helicopters, motorcycle rides through impossibly narrow alleys, rooftop escapes, etc. But the picture’s speciality was the zoo climax and the difficulty shooting it.” Production designer Philip Harrison called the zoo set “A once in a lifetime” undertaking. At 83 feet wide, almost six stories high and 350 feet long, it was the largest studio set ever built in Vancouver. Huge over scales of leaves were created for the background, while enough real plants were planted closer to the foreground to keep two full-time watering crews busy throughout the zoo shoot. With a cast of wild animals moving in, every facet of construction had to allow for the needs of the animals and the disruption that they had to endure, that is why they used a fast-moving camera so it would not inflict them on the set. Using plaster meant that a 700-pound tiger could not put a foot through a wall. Concrete floors had to be cushioned with four inches of sand to protect the cat’s paws. Three kinds of sand was used, and had 16 truckloads from Oregon alone, and had to be mixed, then sifted three time to filter out even tiny bits of glass that might damage the animals’ paws. Two bridges spanned the rain forest’s central 60-foot crevasse. Each was more than three stories above ground and the main suspension bridge had to be engineered to withstand 1,200 pounds of crew and equipment. The zoo’s “piece de resistance” was the here-story waterfall and two companion falls – the first ever built on a soundstage in Canada. The filmmakers met their match when they were joined on set by the zoo menagerie. “No animals are easy to direct,” director John Badham joked. “They don’t read the script.” Iy’s kind of like controlled chaos – you have to be really ready to catch something exciting that may happen, and you have to be ready to deal with things that are dangerous because these wild animals and they will hurt you.” The animals at work were six tigers, one lioness, three jaguars, a baboon and the only male baboon in the world that was trained to work in front of the camera, on top of all that, they had six chimpanzees, four alligators and a seven-foot monitor lizard. Rounding out the cast of wild things was an assortment of exotic creatures recruited in a city-wide animal “extras” casting call, like iguanas, a 12-foot python and 25 different kinds of parrots. The veritable jungle was controlled by veteran animal trainer Monty Cox, who brought several of his own animals that included two male adult tigers, and scoured Canada for other big cats. When viewing this particular special feature, it runs automatically.

Special Feature: Cast and Filmmaker’s Notes: Here we get view in-depth information on the following cast and filmmaker:

Goldie Hawn as Marianne Graves [1990] [1080p] [1.78:1] [1:30] Goldie Hawn [Marianne Graves] is one of the screen’s best-loved  actresses in a career that has taken her from instant stardom on the USA classic television comedy series “Rowan and Martin’s Laugh-in,” through memorable performances in feature films, to a successful of-screen role as a producer. Born in Tacoma Park, Maryland, Goldie Hawn studied drama at the American University. Goldie Hawn made her motion picture debut in ‘Cactus Flower’ [1969], winning the 1969 Academy Award® for best Supporting Actress. Goldie Hawn went on to star in ‘There’s A Girl in My Soup’ [1970], ‘Butterflies Are Free’ [1972] and ‘The Sugarland Express’ [1974] which was Steven Spielberg’s first feature film. After appearing in ‘The Girl from Petrovka’ [1974], Goldie Hawn earned an Academy Award® nomination for her performance in the 1980’s film ‘Private Benjamin,’ which she was also executive-producer. In 1996, she teamed up with Diane Keaton and Bette Midler in the film ‘The First Wives Club.’ When viewing this particular special feature, it runs automatically.

David Carradine as Eugene Soreson [1990] [1080p] [1.78:1] [1:00] David Carradine [Eugene Soreson], is the son of the famed character actor of John Carradine, and was born and raised in Hollywood. After two years as a music major at San Francisco State College, he left to concentrate on acting, and eventually appeared on several USA television series. David Carradine starring role was in the USA television series “Kung Fu” as the half-Chinese half-American priest Kwai Chang Caine and earned him worldwide popularity and a following remains faithful today. In addition to his television work, David Carradine has over 50 feature films to his credit, ranging from his 1965 motion picture debut in ‘Bus Riley’s Back in Town’ to his starring roles in ‘Bound for Glory’ [1976] as Woody Guthrie, and ‘The Long Riders’ [1980]. When viewing this particular special feature, it runs automatically.

John Badham as Director [1990] [1080p] [1.78:1] [1:30] John Badham [Director] was born in England and grew up in Birmingham, Alabama. John Badham was a theatre major at Yale School of Drama, where he earned a second degree directing the classics. John Badham moved to Los Angeles and landed a job in the mailroom at Universal Studios, where he subsequently moved up through the ranks as a tour guide, television casting director, associate producer and finally the director of episodic television and movies of the week. John Badham’s first motion picture directorial assignment was ‘Bingo Long Travelling All-Stars & Motor Kings’ [1976]. John Badham next directed ‘Saturday Night Fever’ in 1997 and the film catapulted John Travolta to worldwide fame and ushered in the era of disco music and fashion. When viewing this particular special feature, it runs automatically.

Theatrical Trailer [1990] [1008i] [1.37:1] [2:40] This is the Original Theatrical Trailer for the film ‘BIRD ON A WIRE.’ But what a shame they could not of shown this trailer in the theatrical release 2.35:1 aspect ratio. Despite this, it is a brilliant trailer and certainly gives you a great sample of what you will view in this on the edge of your seat action packed film.

Finally, ‘BIRD ON A WIRE’ is a highly entertaining mix of action, comedy and romance which is incredibly well done. Mel Gibson and Goldie Hawn have a fantastic chemistry making for a rip roaring ride. Not much in the way of extras but I don’t feel a film like this needs too many. That said the main point of any older title making its way on to Blu-ray has great picture quality. In this case the film looks simply fabulous. Highly Recommended! 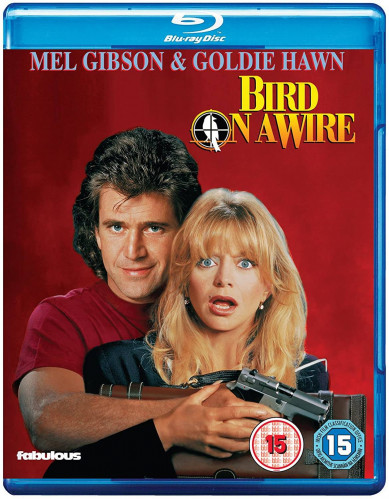 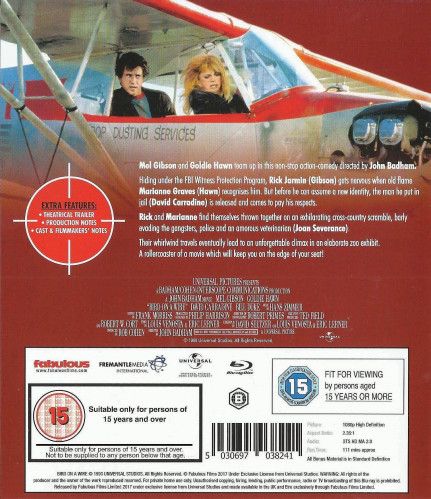