Master jewel thief Miles Logan [Martin Lawrence] of films ‘Life’ and ‘Bad Boys,’ has a big problem, a $20 million dollar problem. Recently released from prison for the botched heist of a huge diamond, he's anxious to retrieve the hot rock which he hid at a construction site two years earlier.

Unfortunately, his hiding place is now at the centre of a recently completed high-security police precinct. Posing as a detective and partnered with straight laced rookie Carlson [Luke Wilson] of `Home Fries' and ‘Bottle Rocket,’ Miles Logan utilises his criminal expertise and inadvertently rises up the ranks, winning the respect of his fellow “boys in blue.”

Powered by a hot soundtrack with music by Jay-Z, Foxy Brown and Tyrese featuring Heavy D. ‘BLUE STREAK’ is a hilarious action-comedy from director Les Mayfield of ‘Flubber’ and ‘Encino Man.’

Andrew's Blu-ray Review: While Martin Lawrence's career has seen a steep decline in the last several years, with such films as ‘Big Momma's House 2’ and ‘Rebound,’ I still make the claim that the actor had a period early on in a very underrated ‘Nothing to Lose,’ where Martin Lawrence's high-energy comedy managed to sell even some of the lesser lines. ‘BLUE STREAK,’ which sees Martin Lawrence at least working with a fun concept, did well enough to result in the similar ‘National Security,’ which came out four years later, but wasn't nearly as funny.

In the film ‘BLUE STREAK’ sees Martin Lawrence playing Miles Logan, a career thief who as the film opens is working with a team in order to try and nab a giant diamond. When fellow crook Deacon [Peter Greene] tries to take the rock for himself, but the police are alerted and Miles Logan is taken into custody, but not before hiding the diamond in one of the ventilation ducts of a half-built construction site.

When he gets out of prison, he heads to the building and finds that...it's now a police station. He manages to scam his way into the police station and, while unlikely, gets the rest of the police force to believe that he's an officer being transferred in. While it wasn't his intent, his experience on the other side of the law actually winds up working to his advantage when it comes to solving cases.

Miles Logan is paired up with a naive cop Detective Carlson [Luke Wilson], and while everything seems to be going along smoother than expected, it's not long before previous partners Tully [Dave Chappelle] and Deacon [Peter Greene] come back into the picture. ‘BLUE STREAK’ holds up very well as I'd remembered it, as there are still some belly laughs, but there is also a fair amount of slapstick gags, and of course the film still manages some good laughs thanks to a funny performance from Martin Lawrence and an amusing little performance from Dave Chappelle. Luke Wilson is as is often the case, pretty nondescript in a supporting effort and it is a shame the script writers could not of involved Luke Wilson more?

Although the gags can be a little uneven at times, director Les Mayfield keeps the film going at a rapid pace, and stages a couple of above-average action moments well, at least for an action/comedy like this. It's above-average at times, and is definitely a reasonably good laugh, but despite this, it has always been a big massive hit for me and if I am feeling a bit down, I put this Blu-ray on and it really cheers me up and chases the blues away.

Blu-ray Image Quality – ‘BLUE STREAK’ is presented by Sony Pictures Home Entertainment in a very nice 1.85:1 aspect ratio with an equally stunning 1080p image. While there was a fair amount to like about this transfer, there were also some flaws that were clearly visible. Sharpness and detail remained mostly above-average, as while some scenes looked pleasingly crisp and clear, other scenes could look mildly softer in comparison. Edge enhancement was seen in moderate amounts in several scenes, causing some irritation. Some light noise was also seen in some sequences, as well. Print flaws remained a relatively minor problem, as they consisted of only the occasional speck, mark and scratch. Colours looked warm and well-saturated, with no smearing or other faults. Flesh tones also remained natural, as well.

Blu-ray Audio Quality – The film ‘BLUE STREAK’ is brought to you with a 5.1 Dolby TrueHD Master Audio presentation isn't terribly out of the ordinary, with surrounds only occasionally fired up in order to deliver a few sound effects and reinforcement of the score, but minimal ambiance or other subtle details. Dialogue remained crisp and clear, while the rap and R&B songs on the soundtrack packs a solid bass.

Special Feature: Setting up the Score [1999] [480i] [1.37:1] [22:00] This is a very uninspired special feature that goes through all the usual motions: film clips, cast and crew interviews, and behind-the-scenes footage. On a positive note, everyone seems to have had a great time on set and their love of the project is infectious. Unfortunately, the documentary runs out of steam pretty fast and will only appeal to the most loyal fans.

Special Feature: HBO First Look: Inside and Undercover [1999] [480i] [1.37:1] [22:00] This is the usual promotional documentary, complete with scenes from the film, and more interviews. Still, although there are some interesting moments, this is one of those documentaries where a lot of the feature seems to be made up of scenes from the film. The rest is interviews with the cast and crew, with a moment or two looking at the set at work. Not the best documentary, but certainly above the average for a HBO documentary. Contributors include: Stephen Carpenter, Dave Chappelle, William Forsythe, Michael Grasso, Toby Jaffe, Francis Lawrence, Martin Lawrence [Ghetto Buck], Les Mayfield, Neal H. Moritz, Nicole Ari Parker, R.A. Rondell, Kristian Sorensen and Luke Wilson. Narrated by Al Chalk.

Theatrical Trailers: ‘Hancock’ and other Sony film are also included on this disc.

Finally, ‘BLUE STREAK’ is a really funny rollicking film that gives me a good laugh every time I view it on this Blu-ray disc, but the film is not for everyone. Martin Lawrence is a clown, and his interactions with the naïve Dave Chappelle are hilarious. I personally bought this Blu-ray disc, only because it features Martin Lawrence at the top of his career, a place we have not seen him in years. It has a great cast, plenty of laughs, and some truly outrageous gags (of the light-hearted persuasion), but it also suffers from some gaping plot holes, idiotic characters, and a predictable story. However, regardless of how you feel about the film itself, the Blu-ray edition is a glorious enjoyment for me especially. Despite all the harsh criticism of ‘BLUE STREAK’ from a few folks out  there and some will argue that ‘Bad Boys,’ ‘Life’ or ‘Nothing to Lose’ are far superior Martin Lawrence comedies. However, I must honestly report that I have not viewed any of the other Martin Lawrence's films, but this one does it for me as really I enjoyed it, so I strongly recommend giving it a look. As for this Blu-ray release itself, I feel the transfer could have been much stronger, but despite this, it is still a good view and some new supplements would have been much appreciated also. Despite this, ever since I had ‘BLUE STREAK’ on the inferior DVD, and it has been a massive favourite of mine and I am now so pleased to have added it to my ever increasing Blu-ray Collection and if you are feeling a bit down in the mouth, then put this Blu-ray on and it will make you grin from ear to ear. Highly Recommended! 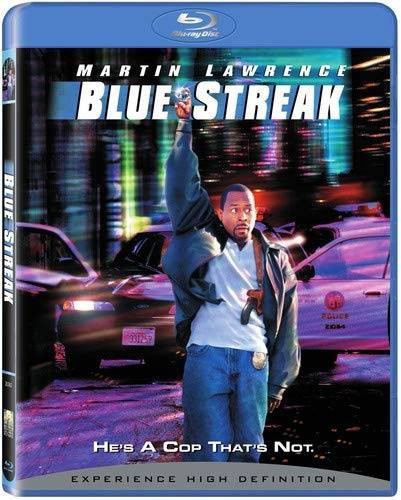 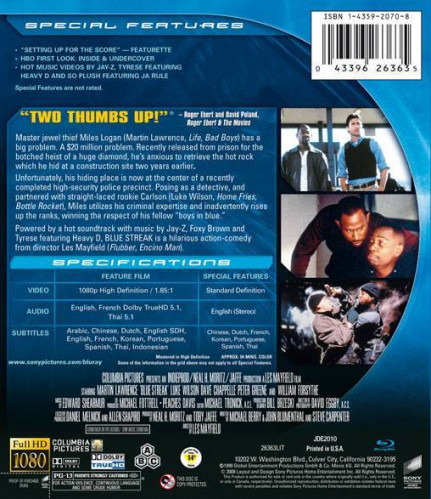