Starring Robin Williams in his remarkable final on-screen performance, ‘BOULEVARD’ follows married but closeted 60 year-old bank employee Nolan Mack [Robin Williams] whose spontaneous turn down an unknown street upends his monotonous life and crumbling marriage. After forming an uncommon friendship with a young, charismatic hustler, Nolan finds himself on a journey of self-discovery and must confront the secrets he has kept hidden from his wife [Kathy Baker] and himself. Nolan Mack’s dramatic decision to rethink his own identity holds with it the promise of happiness and salvation for both he and his wife in this touching and inspiring film. From acclaimed director Dito Montiel, and written by Douglas Soesbe, ‘BOULEVARD’ shines with an ensemble cast that includes Bob Odenkirk and Roberto Aguire in a breakout performance.

FILM FACT: Screenwriter Douglas Soesbe underwent a similar coming out experience, telling Creative Screenwriting, "I came out very late and with a great deal of guilt. This movie is not about me, but I really understand that character." Douglas Soesbe wrote the first draft of the screenplay, which was set in Los Angeles, 10 years earlier, and because of its subject matter did not expect it to ever be produced. When producers showed interest in the project, Douglas Soesbe rewrote the script to set the story in a small town that would be "more constricted than Los Angeles."

Andrew’s Blu-ray Review: ‘BOULEVARD’ is the fifth feature from director Dito Montiel, who has captured not only one of Robin Williams’ last performances, but one of his best, and is an intimate character study and as such, it is but one among many. In the case of Boulevard the elevator pitch is this: Robin Williams is 60, married to a woman, and secretly gay. His name is Nolan Mack and he has a well-payed but dull job in a small bank. As the quiet, inherently sad Nolan Mack, Robin Williams speaks multitudes while uttering very few actual words and there is not one fault in Robin Williams’ performance in ‘BOULEVARD.

In ‘BOULEVARD’ it is billed as Robin Williams’s final swan song on-screen performance, the twinkle in his eye had faded into a dead stare. The mischievous, manic clown, beckoning us to follow him to a comic three-ring circus, has shrivelled to an unreadable automaton with cringing body language. This isn’t the first film in which Robin Williams played a person with a dark secret and shrouded in mixed emotions.

After his box-office hits faded in the late 1990s, Robin Williams conspicuously turned toward low-budget indie film dramas, repeatedly playing isolated and tormented American males in films like ‘One Hour Photo,’ ‘The Night Listener’ and ‘World’s Greatest Dad.’ What strikes you is the similarities to those characters whether in mainstream farce or downbeat realism. The one great thing about Robin Williams’s final film performance is that it shows you how ‘BOULEVARD’ pays a great tribute to this actor's emotional final career's swan song. ‘BOULEVARD,’ which was the late actor's last dramatic role, especially as we are informed in the Theatrical Trailer which deals in suburban malaise and repressed sexuality, especially with those time-honoured indie type films. All of us fans of this brilliant comedian come actor, thought that we would never lose this brilliant genius of Robin Williams; where he made a brilliant career out of humour we have all come to love him for it, especially every time in his tour-de-force live brilliant acts, where Robin Williams unleashed a rip-roaring physicality and especially in the film ‘Good Morning Vietnam,’ where Robin Williams points out with conviction and beams like a very naughty prankster.

In ‘BOULEVARD’ the director wanted Robin Williams to play Nolan Mack as a worker-bee banker, but also stewing in a monotonous marriage, until he meets the male hustler Leo, which starts the long journey of Nolan Mack’s hushed conflicted and eventually obsessive journey towards the young hustler that sadly ends in the eventual demise of their friendship. But when Nolan Mack is supposed to stand in a corner and take sober pleasure in a half-naked man, Robin Williams allows his cautiously smitten character to crack with a smile. Later on, he rejects his wife's offer for bedroom intimacy, but Nolan Mack still loves Joy Mack, which Joy Mack does not believe, it is not really deep love but a deep friendship of love, which we see with Robin William’s giving us a slow sly grin.

The melodrama in ‘BOULEVARD’ pulls him in lots of emotional directions and suddenly has a panicked attack in a race to cover his last night's tryst with the hustler, especially with the cigarette butt, and eventually we get to see a ferocious fight between his Joy and Norman, where he finally informs Joy of his solemn recollection of his closeted childhood in-between, which we see when he also tells the full hidden story of what happened when he was 12 years old, which we also experience without any words when he informs his Father of his dark secret that he has hidden from him all these years and we see his Father’s disapproval without a word ever spoken, but instead turns his head away from Robin Williams. At the centre of this brilliant tour-de-force film is one of course where Robin Williams shows us that he tries to have a spirited outlook with his cacophonous work, which we get a genial outlook throughout the film.

Blu-ray Image Quality – ‘BOULEVARD’ looks absolutely stunning with its 1080p image presentation is a joy to behold. What is also makes this Blu-ray disc look equally stunning is the very respectable 2.40:1 aspect ratio. But when Robin Williams is driving about the city, the black areas are sufficiently dark and very atmospheric, especially the shadows. The palette of muted colours in his working office is off set by the darkened exteriors of the inner city where he lives. But when it comes to the outside shot images in daylight, the film features some nice contrast, some wonderfully rendered shades of green and of course the blue skies is just superb. But when it comes to the close-ups of the actors, you get to see all the pores, tiny facial hairs, and natural wrinkles are all totally visible. So all in all ‘BOULEVARD’ is one of the better looking small budget films available on this Blu-ray disc.

Blu-ray Audio Quality – With ‘BOULEVARD’ has just a one audio track of 5.1 Dolby TrueHD Master Audio track, but even with is audio track, sometimes when the actors speak it is slightly muffled and definitely has no bells and whistles here and The sound mix is dialogue heavy and most of it is anchored to give the impression it was only in Stereo, but now and again we do get some ambient sounds. But the street scenes where Nolan Mack drives around before finding Leo comes alive with street noises, especially with cars honking their horns in the distance, plus we also get faint siren sounds, etc., but sadly there's little in the way of low-end frequencies to be heard. Conversations are sort of nicely positioned as is most of the dialogue is always clear, but when during where they whisper, I had to crank up the volume, but despite this, the overall performance of the audio is very nicely done. But equally what I liked about ‘BOULEVARD’ is the subtle use of the very atmospheric music composed by David Wittman and Jimmy Haun, but the most haunting song that was totally awesome is when you see the credits roll up the screen and I also liked near the end, the two dedications to people who are no longer with us and of course one of those was for Robin Williams.

Blu-ray Special Features and Extras: Sadly, Anchor Bay and Starz Digital decided this Blu-ray disc did not need any special features, in-depth interviews with the actors or even a theatrical trailer, but despite the lack of any kind of extras is a real shame, but the film definitely makes up for it.

Finally, it was very hard and at the same time very sad watching Robin Williams portray such a sad and lonely character in his final performance, especially when we all know how much he was actually suffering at the time of the filming. But despite this ‘BOULEVARD’ was again Robin Williams’s final swan song with a really great film in terms of revealing untold truths or trying to piece one’s life back together and of course features some memorable acting performances from one of our greatest actors and comic genius of our times. For that alone it is well worth purchasing this brilliant and thought provoking Blu-ray disc. But one very big disappointment to this Blu-ray disc is that Anchor Bay / Starz Digital has decided to not supply any special features extras, especially as I would have thought that they could have done a special dedication to the late and great Robin Williams, especially from all the cast and crew involved with the film ‘BOULEVARD.’ Very Highly Recommended! 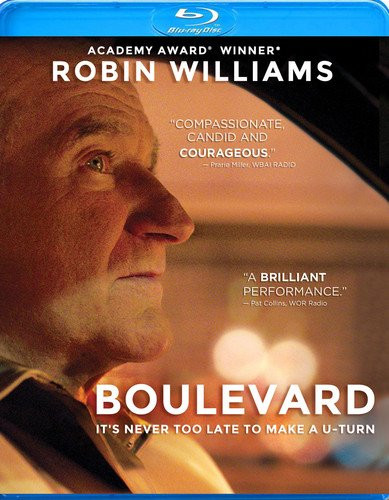 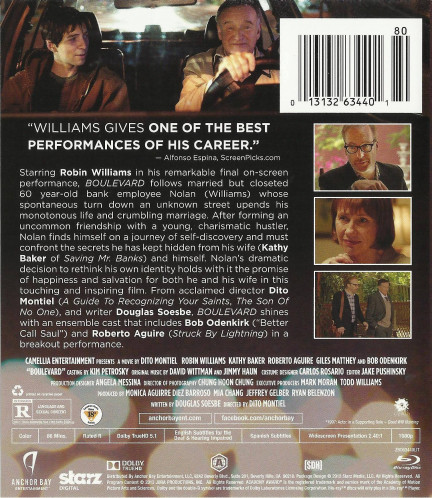