Imagine a machine that downloads one person’s thoughts and sensations to another individual. Any person. Any experience. Now imagine how the breakthrough technology might be corrupted in the wrong hands.

Christopher Walkern, Natalie Wood (in her final film) and Louise Fletcher play virtual reality researchers determined to keep their high-tech invention from lowdown tampering in ‘BRAINSTORM.’ Bruce Joel Rubin [‘GHOST’ and ‘Jacobs Ladder’] provides the tantalising “what if?” story, and Douglas Trumball (inventor of the first simulation theatre and a special-effects trailblazer on ‘2001: A Space Odyssey’) produces and directs this dazzling adventure. Wire up.

FILM FACT No.2: To prepare for the film, Douglas Trumbull took most of the key cast and crew up to the Esalen Institute, an experimental research facility in Northern California known for its new-age classes and workshops. In September 1981 the cast and crew travelled to North Carolina to begin six weeks of location shooting, before moving back to M-G-M Studios in California in November to film interior scenes. The film was conceived as an introduction to Douglas Trumbull's “Showscan” which is his innovative new High Frame Rate Format with a 60 frames-per-second 70mm film process. The film was nearly scuttled by Natalie Wood's death during a production break in November 1981. Douglas Trumbull proceeded to complete the film by rewriting the script and using a body double for Natalie Wood's remaining scenes. At the end of the film it carries the dedication credit "To Natalie."

Andrew’s Blu-ray Review: ‘BRAINSTORM’ [1983] is your modern day button-pusher's paradise, replete with the dazzling array of hardware that ‘BRAINSTORM’ so effectively utilises. Here we find a group of scientists that is poised on the brink of an astonishing amazing scientific discovery where invents a brain/computer interface that allows sensations to be recorded from a person's brain and converted and have created a device that allows one person to experience the sensations of other people. If Person “A” is wearing a specially designed helmet, eats a piece of steak with nuts, chocolate sauce and marshmallow on top with a cherry, which see the food used in the experiment, then Person “B” is able to actually taste the same food that Person “A” is eating.

Douglas Trumbull is a technologist at heart, and maybe a bit of a dreamer, but he's also a realist. ‘BRAINSTORM’ allows itself some totally indulgent thrill-ride moments, but there's an ominous undercurrent to its futurism from square one. The film's opening scenes depicts an early technology test, with Dr. Michael Brace [Christopher Walken] donning a prototype version of the ‘BRAINSTORM’ helmet in a lab environment to experience a live feed from another person who is a really nasty stupid prankster who then puts the helmet on a lab monkey, and next we see Christopher Walken starts to shake and tremble in his chair as though experiencing a kind of mental seizure. It's not played like a scene in a horror film exactly and there's a bit of comic relief as Christopher Walken scolds the idiot technician, by saying, "There is something wrong with you," he declares, in perfectly deadpan Christopher Walken his usual performance. It is clear that something's amiss, because eventually we feel for all the good the ‘BRAINSTORM’ device might bring into the world; it has the potential to channel deeply disturbing experiences as well and some of the rainbow metal tapes are even labelled as "toxic."

When the scientists discover that their invention actually works, they excitedly drink a toast to its seemingly endless possibilities. And so with the film ‘BRAINSTORM’ follows the scientists as they then discovers that their endeavour is not purely for research-minded individuals, because the nasty secretive military personnel can imagine more sinister uses for the device. Here we follow Dr. Michael Brace, one of the inventors, and his wife, Karen Brace [Natalie Wood], as their marriage falters, but Karen Brace helps to enhance the helmet itself to more manageable size, since this is indeed the films real star. Lillian Reynolds [Louise Fletcher] is pressured by backers to admit a former colleague, Landon Marks [Donald Hotton], whom she sees as part of the military-industrial complex. Lillian Reynolds disagrees with their plan to have the invention developed for military use.

The brilliant director/producer Douglas Trumbull, who is the special-effects wizard for this film, has devised an unusually varied high-tech look for the film ‘BRAINSTORM,’ because were we see the laboratory where the scientists work looks amazingly sophisticated, but also very lived in; the amazing helmet itself is refined with a collection of lights and wires and lenses to something streamlined and sleek. Later on, when an automated assembly line is established to mass produce these amazing helmet’s, and Douglas Trumbull makes it seem very matter of fact as well as giving us a sense of a very sinister outlook and of course we eventually finally get revealed a very wicked outcome of the film, where the baddies seem to get the upper hand, but of course they all get their comeuppance in the end.

With most of the special effects scenes are of course, reserved for those images provided by the helmet and we see the helmet device captures the ultimate sensation, but when some of the experiments go seriously wrong, but lucky for us Douglas Trumbull can't convey the real dangers while we are actually watching the film for real via your Home Cinema set-up, thank goodness. But Douglas Trumbull can certainly makes you feel it is totally real and totally believable, as well as very frightening when you see the euphoric fireworks explode on the screen. In the film's downward-spiralling second act, the machine is put to one of its most obvious uses, as the joker creates a sex tape with it that a colleague edits the rainbow metal tape into an infinite loop, with physically debilitating results.

Christopher Walken is in my mind slightly misplaced, and he never seemed very convincingly that of a brilliant scientific inventor. However, Christopher Walken is much better in the later action sequences of the film with the early laboratory scenes. Christopher Walken and Natalie Wood do seem to work well together near the end of the film in the way they thwart the efforts of the nasty people trying to stop Christopher Walken gets to experience what happens when Lillian Reynolds suffers a heart attack while working alone and realising that she will eventually die, Lillian Reynolds records her experience and turns on the machine by hitting the “record” button and starts recording her fatal heart attack and we finally experience her final demise and contents of that recording, depicting the first part of the decedent's passage into the afterlife, becomes the engine that drives the film’s final climax.

However adversely it must have affected the morale of those involved in making ‘BRAINSTORM,’ the death of Natalie Wood hasn't damaged the film. Her performance feels complete. Playing a more mature character than she had done before, Miss Natalie Wood brought hints of a greater sturdiness and depth to this role, which is pivotal but relatively small.

While ‘BRAINSTORM,’ didn't end up as a showcase for “Showscan,” that Douglas Trumbull nonetheless captured the aura of a cinematic technology start-up in the film's first act, showing the creation of a ‘This Is Cinerama’ style demo reel that puts images of a water slide, sweeping vistas, and girls in bikini-tops to clever, calculated use and I really loved the quick cuts that juxtapose the wild, fish-eye popping footage with the backs of the heads of venture capitalists assembled at a boardroom table, and it is totally hilarious when you see them all moving to the effects of the rollercoaster ride. The device is designed to resemble a flatbed film-editing machine loaded up with thick reels of rainbow-striped metal recording tape, making it a perfect nostalgia trigger for anyone who lived through the early days of videotape and remembers how it seemed to make everyone's film memories more accessible than ever before.

With the film’s ending where Michael Brace replays Lillian Reynold’s death tape, at the Wright Brothers monument at Kitty Hawk, no less, sees a vision of heaven; which was often criticised upon the film’s release as being too “on the nose.” As Douglas Trumbull said at the time, “We wanted to have this sort of euphoric release at the end, like the birth process.” The sequence is open to whatever you bring to it and if you are at all religious, maybe those are ‘angels’ that Christopher Walken sees, it is up to you to decide whether Christopher Walken is actually experiencing the sensation. I don’t see it so narrowly; I see it as getting in touch with a more expanded consciousness or awareness of life, or that matter, the universe, and energy itself and I felt the “angels” going towards the light a most awesome spectacular visual presentation. A lot of people have speculated about this, especially the people who are really into quantum mechanics and particle physics are starting to meet up with the philosophers in discussing what the hell is the nature of the universe.

Blu-ray Image Quality – ‘BRAINSTORM’ arrives on Blu-ray from Warner Home Video in a no-frills package. The 1080p encoded image is totally stunning and black levels and contrast between the two formats show similar differences. Plus you get the image presented in the 2.40:1 aspect ratio from a 35mm theatrical print. Throughout the film you experience a ‘BRAINSTORM’ footage that is in the "windowboxed" aspect ratio of 1.66:1 that sits in the middle of the widescreen frame, with black bars on all four sides, to make you experience the awesome full presentation of the 2.40:1 aspect ratio in the Douglas Trumbull’s “Showscan” 60 frames-per-second 70mm film process. This accurately reflects the theatrical experience. I hope in time Warner Home Video will hopefully bring out an Anniversary Special Edition in a new 4K master print.

Blu-ray Audio Quality – ‘BRAINSTORM’ is brought to us in the  5.1 DTS-HD Master Audio but in the 1.66:1 aspect ratio seems to be only presented in the stereo audio presentation, but in the 5.1 DTS-HD Master Audio you experience something spectacular ambient surround effects, with the use of all the speakers, with a broad directionality, even dialogue is spread across multiple channels, and the musical depth is also rich ambient presentation, especially with the brilliant James Horner composition score, but to complete the fantastic sound effects is when you experience the very heavy rumble bass effects. But overall the audio soundtracks have a very satisfying depth throughout the film.

Finally, the technical effects in ‘BRAINSTORM’ are totally awesome and intriguing, because Douglas Trumbull, the director, is Hollywood's legendary special effects ace, especially with films like ‘2001: A Space Odyssey,’ ‘Silent Running,’ ‘Close Encounters of the Third Kind,’ and Douglas Trumbull does a most beautiful wonderful job of making the telepathic experiences visually exciting. But of course Douglas Trumbull makes you experience the 1.66:1 standard lenses and the awesome astonishing visual effects via the 2.40:1 aspect ratio lenses that regularly happens back and forth throughout the film formats, and is helped along with you experiencing standard Stereo audio and the awesome 5.1 DTS-HD Master Audio sound, which is a great experience you only get with this film. All in all, this film uses science fiction to its fullest. The middle section is the best, where the characters are struggling like businessmen with their discovery and trying to figure out what it’s capable of. The metaphoric message isn’t really all that metaphoric by the end, as the film telegraphs a hopeful tune. Christopher Walken is not as over-the-top as in other films he has appeared in. But the film is largely a great weakness of mine because I like to see how science fiction can explore almost anything. I guess that’s why the characters end up at the Wright Brother’s Museum at the end, because they too are explorers of the human existence. Highly Recommended! 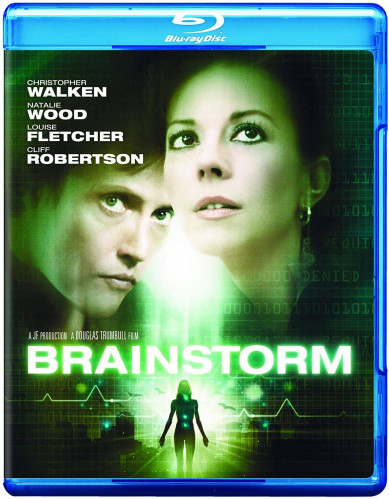 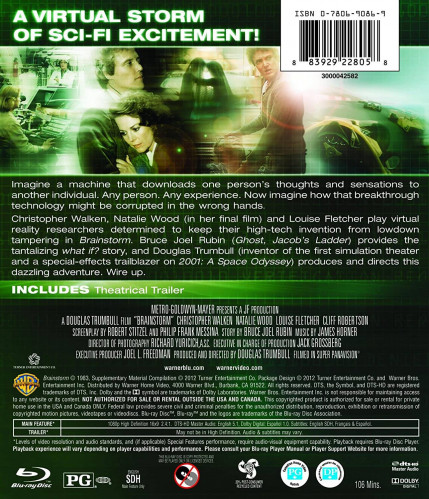