It's only a state of mind. Jonathan Pryce stars as Sam Lowry in this surrealistic spectacle about a daydreaming bureaucrat trapped in a future dystopia where love is forbidden from interfering with efficiency. But with the help of an underground superhero Harry Tuttle [Robert De Niro] and a   beautiful mystery woman Jill Layton [Kim Greist], and Sam Lowry learns to soar to freedom on the wings of his untamed imagination, or so he thinks. Acclaimed filmmaker Terry Gilliam directs with an acerbic wit and poet's eye that dazzles like never before in glorious high.

FILM FACT No.2: Though a success in Europe, the film ‘BRAZIL’ was unsuccessful in its initial North America release. It has since become a cult film. Terry Gilliam developed the story and wrote the first draft of the screenplay with Charles Alverson, who was paid for his work but was ultimately uncredited in the final film. For nearly 20 years, Terry Gilliam denied that Charles Alverson had made any material contribution to the script. When the first draft was published and original in-progress documents emerged from Charles Alverson's files, however, Terry Gilliam begrudgingly changed his story. Terry Gilliam sometimes refers to this film as the second in his "Trilogy of Imagination" films. The film ‘BRAZIL’ was produced by Arnon Milchan's company Embassy International Pictures. Gilliam's original cut of the film is 142 minutes long and ends on a dark note. This version was released internationally by 20th Century Fox.

Ary Barroso's 1939 song "Aquarela do Brasil" ("Watercolor of Brazil", often simply "Brazil") in a version specifically performed by Geoff Muldaur is the leitmotif of the movie, although other background music is also used. Michael Kamen, who scored the film, originally recorded "Brazil" with vocals by Kate Bush. This recording was not included in the actual film or the original soundtrack release; however, it has been subsequently released on re-pressings of the soundtrack. According to Gilliam in an interview with Clive James in his online programme “Talking in the Library,” to his surprise ‘BRAZIL’ is apparently a favourite film of the far right in America.

Throughout this superb film that satirizes modern technological society; one can glimpse numerous government propaganda signs, billboards, posters and writings that preach conformity and Big Brother wariness – all references to George Orwell's 1984 and the signs are credited to co-scriptwriter Charles McKeown. Police are represented as Nazi-like storm troopers, and the names of two major officials have stereotypical German names: Kurtzmann and Helpmann.

The influential film's enigmatic title refers to the popular Latin song from the late 1930s by Arry Barroso, often used as an escapist theme in the orchestral soundtrack by Michael Kamen. Other titles were considered for the film: ‘The Ministry of Torture,’ ‘1984’ (homage to Fellini's ‘8 ½’), and ‘How I Learned to Live with the System,’ so far. The normal workers in society are docile, powerless, and obedient - to avoid calling attention to themselves and ending up eradicated (literally and figuratively) from the files in the Ministry of Information's flawed computer system.

This popular and compelling film with a large cult following is one of the most visually imaginative, breath-taking, eccentric films ever created, with incredible sets, dazzling inventiveness and production design by Norman Garwood. The film is so visually dense that it takes several viewings to fully comprehend i.e., the billboard slogans, the user-unfriendly technical gadgets, the unforgettable images, etc. The most memorable and outrageous components in the absurdist film include the ugly, violent, nightmarish urban environment, and the miles of inept plumbing, piping and ductwork that continually proliferate and threaten to malfunction. The title is based on the Ary Barroso/S.K. Russell song of the same name, with the lyrics: "Brazil” and includes the words, “Where hearts were entertaining June.” “We stood beneath an amber moon.” “And softly murmured someday soon,” “We kissed and clung together,” “Then, tomorrow was another day,” “The morning found me miles away” and “With still a million things to say."

The morose and complex plot, set in a decaying, terrorist-threatened London type metropolis with a Fascist government, revolves around a meek, unambitious, and humble urban worker/computer expert named Sam Lowry [Jonathan Pryce] in the red tape-plagued, bureaucratic Ministry of Information. As a lone hero, he combats the real technological threat of “The Machine Age” to his life by his fantasies of defiance as a winged saviour during his nightly dreams. To escape reality and his grinding down by oppressive, official forces, both in the real world and in his imaginative dreams, in the form of evil creatures, he dreamily wings his way into the sky with lofty but doomed flights and away from technology toward a blonde fantasy-dream girl Jill Layton [Kim Greist]. The film's chain of events is set in motion by a clerical error, which condemns an innocent man, and causes Sam Lowry to meet his dream girl who is a suspected terrorist. His apparent salvation from the nightmarish, chaotic, paper-choked, poorly-functioning society comes in the form of a guerrilla heating-engineer and terrorist enemy of the state Harry Tuttle [Robert De Niro], whose renegade behaviour is opposed by the state's own Central Services representative Spoor [Bob Hoskins] and Sam Lowry's friend-turned-sinister MOI official Jack Lint [Michael Palin]. But in the end, the lowly and self-deluded worker is persecuted and tortured to death while again imagining escape to an illusory idyllic paradise that is free of societal restrictions.

However, it may be argued that the existence of “terrorists” in the film i.e., Jill Layton [Kim Greist], Harry Buttle [Robert De Niro] and Sam Lowry [Jonathan price] are all accused of being terrorists, and various “terrorist” acts, i.e., the restaurant and shop bombing, the blown up car, are deliberately made ambiguous and it is very probable that the central threat of terrorism is the government's way to silence deviation, provoke fear, cover up its multiple errors, and provide a scapegoat enemy. Viewers must interpret this central theme of the film for themselves and recognise the fact that ironically and there may be no terrorists at all.

Former animator Terry Gilliam, is famous for his work in the TV comedy ‘Monty Python's Flying Circus’ and in his two previous films ‘Time Bandits’ [1981] and ‘Monty Python's The Meaning of Life’ [1983], and wrote the screenplay for the bleak, futuristic film with playwright Tom Stoppard and Charles McKeown. Its two Academy Award nominations were for Best Screenplay and Best Art Direction/Set Decoration both unrewarded with Oscars. The film, a merging of fantasy and reality, was considered part of a "dreamer" trilogy, of sorts, an Age of Reason trilogy reflecting the different ages of man's reason and of Terry Gilliam himself, in which reason is the opposite of fantasy and dreaming.

The film fared poorly and disappointingly at the box-office. However, in intervening years, especially after the release of the original, full-length Director's Cut (142 minutes long, combining footage from both the American and European theatrical release versions) which of course is the shorter version with this particular Blu-ray disc, and it has been critically-acclaimed as a social satire on the dehumanising, claustrophobic effects of technology and government, and regarded as one of the greatest cult classics ever made.

AS TIME GOES BY (Written by Herman Hupfeld)

Blu-ray Image Quality – The film ‘BRAZIL’ has been framed at 1.85:1 for this brilliant 1080p image transfer. It’s a stunning-looking encode with superb sharpness which offers tons of detail to the viewer and colour saturation which is rich without ever going overboard. Flesh tones are very realistic and appealing throughout. While black levels may be a shade or two lighter than optimum levels, the wonderfully dialled-in contrast makes the most of the image quality and is by far the best the film has ever looked on home video.

Blu-ray Audio Quality – The 2.0 Dolby Digital Stereo Audio track might not have the rich fidelity of more modern movie fantasies, but it plays quite well for the purposes of this film. If the explosions lack a bit of depth and impact and there are a fair number of them in the film, the other sound effects and the music all come forth very well in this lossless transfer. Dialogue is always discernible, especially as it is always placed in the centre channel with the 2.0 Dolby Digital Stereo Audio track.

Special Feature: What Is Brazil? [1985] [480i] [1.37:1] [29:08] This is on-set documentary directed by Rob Hedden, Terry Gilliam, editor Julian Doyle, co-writer Tom Stoppard, co-writer Charles McKeown, co-producer Patrick Cassavetti, and actors Jonathan Pryce, Katherine Helmond, Kim Greist and Michael Palin, among others, discuss what the film ‘BRAZIL’ is and what is its messages is trying to tell us. Sadly the quality of this documentary is of totally shocking quality and would have been best had it not been included and have had some other extras from The Criterion Collection Blu-ray disc for example.

Theatrical Trailer [1985] [1080i] [1.78:1] [3:30] This is the Original Theatrical Trailer for ‘BRAZIL,’ but for some unknown reason it starts off as black-and-white images, then eventually goes into colour, very strange?

Finally, arguably Terry Gilliam's magnum opus, ‘BRAZIL’ is a bizarrely surreal, highly-imaginative black comedy set in a bleak, mechanical future. The frightful vision of a totalitarian, bureaucratic hell is a visually-arresting film where fantastical dreams merge with dreary nightmares and features terrific performances by Jonathan Pryce, Robert De Niro and Michael Palin. Courtesy of 20th Century Fox Home Entertainment, and this controversial, cult sci-fi classic arrives onto Blu-ray with an excellent audio and video presentation and very badly lacking in any decent supplemental material, but despite this, I am so pleased to add this to my ever increasing Limited Edition SteelBook Blu-ray Collection. Highly Recommended! 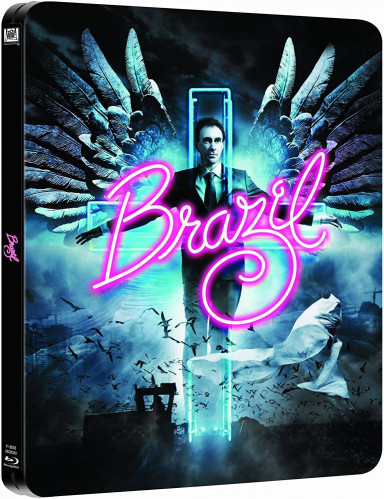 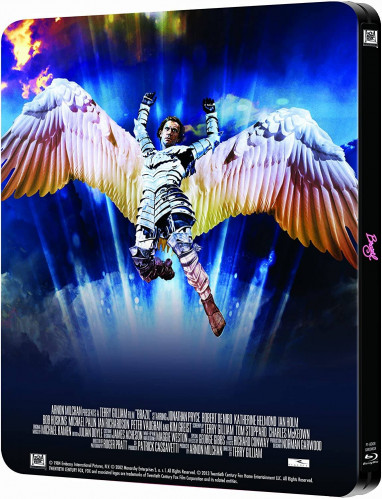