Could you spend $30 million in 30 days and have nothing to show for it? That’s exactly what Richard Pryor has to accomplish in this hilarious contemporary version of the classic big money comedy.

Montgomery ‘Monty’ Brewster [Richard Pryor] is a down and out baseball player who discovers that he’s the only living relative of an eccentric multi-millionaire Rupert Horn [Hume Cronyn]. Montgomery ‘Monty’ Brewster stands to inherit $300 million, but only if he can spend $30 million in a single month without acquiring and assets. If he fails, it’s back to zero again.

On hand to help Richard Pryor to spend his loot are John Candy, Lonette McKee and Stephen Collins. This outrageous spree-for-all is directed by Walker Hill and Produced by Lawrence Gordon and Joel Silver, with a screenplay by the team that wrote ‘Trading Places.’ It’s an American excess story that’s enriching to funny-bones of all ages.

FILM FACT: The Hackensack Bulls' baseball park was a set from the TV series “Bay City Blues,” formerly located at the LADWP Valley Generating Station in Sun Valley, California. Princess Anne visited the set during filming as part of her USA tour. Walter Hill says later he purposefully made the film "to improve his bank account and success quotient." Walter Hill later called the movie "an aberration in the career line" being his only flat out comedy. Walter Hill added that "whatever [the film's] deficiencies, I think the wistful quality was there. I was happy about that. The picture did well and made money."

Andrew’s Blu-ray Review: ‘BREWSTER’S MILLIONS’ [1985] Montgomery ‘Monty’ Brewster [Richard Pryor] is a pitcher and a bit of a screw-up — despite trying for 15 years, Montgomery ‘Monty’ Brewster’s still stuck in the minor leagues, and after getting into a bar brawl, he and best  friend/catcher Spike Nolan [John Candy] gets fired from the Hackensack Bulls. However, Montgomery ‘Monty’ Brewster discovers that he has inherited $30 million from his deceased great uncle Rupert Horn [Hume Cronyn]. But this money comes with some stipulationsâ€the will states that if he spends all of this money within 30 days, and amasses no assets, then he will inherit another $300 million. If he fails to lose all of the money within the 30 days, he will get nothing, and the rest of the inheritance will go to the law firm executing the will.

There are other stipulations that disallow him from just giving or throwing the money away, or telling anyone about the terms of the will. Helping to keep track of his purchases is accountant Angela Drake [Lonette McKee], whom Montgomery ‘Monty’ Brewster falls for almost immediately, but Angela Drake is in the dark about the challenge.

Montgomery ‘Monty’ Brewster soon quickly discovers that the task of spending $30 million in 30 days is not going to be as easy as he originally thought. Montgomery ‘Monty’ Brewster goes on a spending spree, treating strangers to fancy meals, renting out penthouse apartments, hiring a security team, investing in horrible business and stock opportunities, and larger things like arranging an expedition game between his old minor league team and the Yankees, and running a political campaign. However, His attempts to lose the money often backfire, netting him profits that negate his previous efforts. Montgomery ‘Monty’ Brewster friends also grow increasingly concerned about how he is rapidly going through his inheritance. And his attempts to win over Angela Drake also have the opposite effect and see his wastefulness and flashing around of money as a sign of vapid vacuous arrogance.

‘BREWSTER’S MILLIONS’ still holds up extremely well today. It is a classic, timeless story, filled with heart and humour about a down-on-his luck man who is given the chance to change his circumstances, but must do things that make his family and friends question his motives and sanity in order to get there. Richard Pryor is perfectly cast in this role, and pairs well with John Candy, whose character really feels like long-time friends. The two comedians deliver the humour while also portraying characters you care about and are rooting to succeed. The film also has a great supporting cameo cast list, including Jerry Orbach, Tovah Feldshuh, Stephen Collins, Yakov Smirnoff, Rick Moranis, and many more.

‘BREWSTER’S MILLIONS’ does a nice job of borrowing and modernizing elements from previous adaptations of Timothy Harris’s 1902 novel “Brewster’s Millions,” while also coming up with some clever new ways for Montgomery ‘Monty’ Brewster to dispose of his money, and some fun twists to throw some last minute  wrenches into his plan. The screenplay was written by the same folks who did ‘Trading Places,’ and there are definitely some elements of that film that are also evident here as well.

Walter Hill is one of my favourite directors. Specializing in action he made classics like ‘The Warriors,’ ‘Southern Comfort’ and ‘Streets of Fire.’ Well in 1985 Walter Hill made his one and full-fledged comedy, ‘BREWSTER’S MILLIONS’ starring Richard Pryor and John Candy and of course already mentioned that it is actually based on a book of the same name, and has been adapted into 13 films worldwide.

Richard Pryor and John Candy have great chemistry together, and Richard Pryor actually being more of the straight man of the two. It’s a shame they were not able to work together much more in other films of this genre. The film is also very clever and the ways Montgomery ‘Monty’ Brewster comes up with way to dump money are hilarious. If you haven’t seen it I won’t spoil anything, but the part where Montgomery ‘Monty’ Brewster buys a priceless stamp and gets rid of it is classic in my opinion. It’s also definitely something you can watch with the entire family.

Blu-ray Image Quality – Universal Pictures and Fabulous Films Limited presents us the film ‘BREWSTER’S MILLIONS’ with a pretty standard 1080p image and is enhanced with a 1.85:1 aspect ratio. It seems the print image is certainly not a new transfer from a re-mastered print, and most likely just using the original master again. It looks better than you’ll have seen it before most certainly, and not just for the original aspect ratio. There is a decent amount of detail, it’s pretty solid, stable and very clear throughout the film, although the colour palette rarely perks up, but is fairly stable throughout the film. In some of the darker scenes there tends to be lack of detail; especially anyone wearing black clothing, but it’s certainly better than anything the inferior DVD can manage and overall Universal Pictures and Fabulous Films Limited have done a sterling images presentation. Please Note: Playback Region B/2: This will not play on most Blu-ray players sold in North America, Central America, South America, Japan, North Korea, South Korea, Taiwan, Hong Kong and Southeast Asia. Learn more about Blu-ray region specifications.

Blu-ray Audio Quality – Universal Pictures and Fabulous Films Limited brings us the film ‘BREWSTER’S MILLIONS’ with just one standard 2.0 DTS-HD Master Audio experience, and it’s perfectly fine, the dialogue clear for the most part, a nice level of clarity and solidity to the audio, with no glitches or issues with age, and of course we get music from my favourite decade. There was a time when Patti LaBelle featured on every movie soundtrack!

Special Feature: Cast and Filmmakers: Here we get in-depth information about different people involved with the film ‘BREWSTER’S MILLIONS’ and they are as follows: Richard Pryor, John Candy, Lonette McKee, Stephen Collins and Walter Hill. What you have to do if you want to know the in-depth information the people mentioned, you have to highlight their name and press the enter button on your remote control.

Special Feature: Production Notes: Here you get the in-depth history about the different versions of the film ‘BREWSTER’S MILLIONS’ that have been released and the first version released starred Fatty Arbuckle in 1921, then film was updated as a cinematic vehicle for Jack Buchan in 1935, then Dennis O’Keefe in 1945 and then Jack Watling in 1961.

Finally, ‘BREWSTER’S MILLIONS’ story set during the decade of greed and excess that makes it all the more poignant, the antithesis of Wall Street and the “greed is good” philosophy. Here it’s the lesson that with wealth comes problems, problems that you least expect, and there’s no joy to be had with egregious amounts of money. Of course that’s a pretty puritanical position, but it is how the film presents the message that makes it work. Even now, thirty years on, ‘BREWSTER’S MILLIONS’ is a great comedy, which makes the most of the decade of greed to present its vision, yet it too  has an aspect to it that works even better today than it did in 1985. ‘BREWSTER’S MILLIONS’ is also a star vehicle for the brilliant comedian Richard Pryor, who of course sadly passed away some time ago as did the brilliant John Candy. You simply can’t imagine anyone else in the role, and presented with the mountain of $30 million to get rid of, it’s his constant “on the verge of a nervous breakdown” persona that carries the film. It’s also helped by great comic writing, a perfect pace, and a solid supporting cast, not least of which is John Candy as Spike Nolan, is Montgomery ‘Monty’ Brewster’s best friend. ‘BREWSTER’S MILLIONS’ still works brilliantly as a comedy today, and is well on its way to becoming a timeless classic, a morality tale wrapped up in a whole lot of mirth. The film has been woefully underserved on home video, and while you could expect a whole lot more from a Blu-ray release, this is still better than anything that has been released before. Highly Recommended! 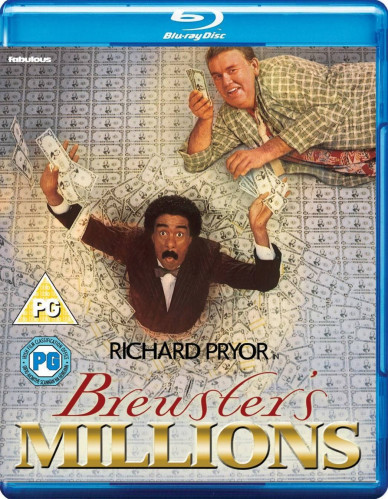 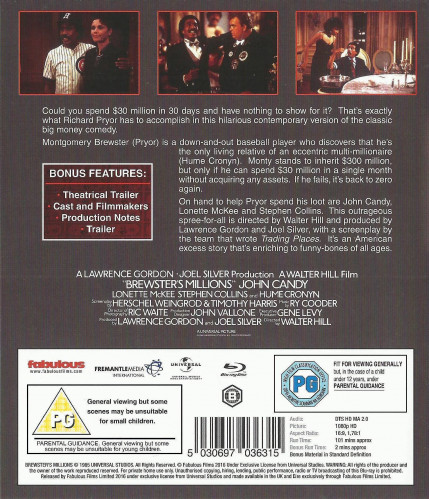