BRIGADOON [1954 / 2017] [Warner Archive Collection] Blu-ray] [USA Release]
When You Love Someone, Everything is Possible, Even a Miracle!

Look on a map and you won’t find it. Look in your heart and there it will be. Enchantment is a place – and a movie – called ‘BRIGADOON’ when Gene Kelly stars in and choreographs a lyrical film adaptation of the 1947 Broadway musical by Alan Jay Lerner and Frederick Loewe [‘My Fair Lady’ and ‘Camelot’].

Vincente Minnelli directs this otherworldly tale of vacationing New Yorkers Tommy Albright [Gene Kelly] and Jeff Douglas [Van Johnson] who discover a Scottish village that comes to life once every 100 years for one day only. There, Tommy Albright and the town lass called Fiona Campbell [Cyd   Charisse] share the love of a lifetime – one seemingly allotted just 24 hours. But fear not, there’s magic and timeless song hereabouts: “Almost Like Being in Love,” “The Heather on the Hill” and more!

FILM FACT No.2: Producer J. Arthur Rank acquired the rights of the official play in February 1951. According to the press, Metro-Goldwyn-Mayer “paid a fortune” for the rights, and Gene Kelly and Kathryn Grayson were named in the leads a month later. By the time they were cast, a script was not written yet, although it was reported that Alan Jay Lerner was expected to start on the script a week later. Furthermore, Alec Guinness was also set for a role, as well as David Wayne, Moira Shearer and Donald O'Connor were under consideration for one. According to the film's director, Vincente Minnelli, Donald O'Connor competed with Steve Allen and Bill Hayes for the role of Jeff Douglas. Cyd Charisse replaced Kathryn Grayson in March 1953. Elaine Stewart was cast in the fourth lead in November 1953, and it was reported that she was more enthusiastic about working with Vincent Minnelli than with Gene Kelly. In addition, rather than being filmed in the expensive original three-strip Technicolor process with the 1.37:1 square-frame aspect ratio, the film was shot in single-strip Metrocolor and utilized CinemaScope, the newly patented 20th Century Fox 2.55:1 anamorphic widescreen process to add clarity and presence to the picture. ‘BRIGADOON’ worldwide gross of $3,275,000 narrowly recovered its hefty $2,352,625 investment.

Andrew’s Blu-ray Review: In the film ‘BRIGADOON’ [1954] we find the Scottish village of Brigadoon that is only magically awakens for one day every 100 years. Two Americans, Tommy Albright [Gene Kelly] and Jeff Douglas [Van Johnson], become lost during a hunting trip in Scotland and stumble across an odd little village, Brigadoon, which isn't on their map. Tommy Albright quickly falls in love with beautiful Fiona Campbell [Cyd Charisse], while the more cynical Jeff Douglas takes in the strange goings-on in the town with a jaundiced eye.

Brigadoon seems strangely lost in an older time, and when Tommy Albright sees some confusing dates in Fiona Campbell’s family Bible, she takes him to the village schoolmaster, Mr. Lundie [Barry Jones] for an explanation. It's a long story which boils down to a miracle: The people of Brigadoon are essentially still living in the 1700s, with the village appearing for just one day every century. An outsider can remain in the village if he loves someone enough...and so Tommy Albright has a big decision to make.

The criticism one hears most often about this film is that it wasn't filmed on location in Scotland or elsewhere, so to me personally, it all looks so beautiful and I really love the great location filming, because the village of Brigadoon’s look has honestly never bothered me. The extensive sets filmed in widescreen make it come across just a bit like a filmed stage play, especially as groups are often emphasized over close-ups; that said, the storybook look creates an otherworldly environment which works for me in the context of this film.

I simply love getting lost in the story, the gorgeous music, and the film's look. The Blu-ray is truly beautiful, bringing out the best in the film's fairly plain Ansco Color; and Cyd Charisse's orange underskirt and yellow shawl, and later her red dress and green shawl, matching Gene Kelly's green shirt are the best they have ever looked.

Jimmy Thompson and Virginia Bosler are nicely cast as Fiona's sister and her fiancé, who are front and centre during the film's extended wedding sequence late in the film. ‘BRIGADOON’ comes most strongly alive during this section of the film, from the "Gathering of the Clans" through the "Wedding Dance." The choreography, Conrad Salinger's orchestrations, Irene Sharaff's Oscar-nominated costuming, and Joseph Ruttenberg's best camera work in the film, fully utilizing the CinemaScope screen, combine for a thrilling experience. The high-stepping Scottish dancers in their colourful tartans never fail to give me goose bumps.

The tone of the film to my mind is High Art, with the accompanying lofty emotions established and maintained through the balletic movements of Cyd Charisse and Gene Kelly, even when they’re not dancing. Most of Frederick Loewe’s songs aim for romantic sentiments of the kind that exalt true romance as a nearly impossible ideal, and a lot of people feel that Almost Like Being In Love” and “The Heather on the Hill” are melodic standouts. Only the “Go Home With Bonnie Jean” dance develops a communal sense of fun.

What really stands out about the film ‘BRIGADOON’ is the lovely relationship between Gene Kelly and Cyd Charisse, unsurprising considering their friendship, and when Tommy Albright walks away from Fiona Campbell in the climax, your heart breaks. Even if you aren’t wrapped up within the plot, their acting forces you to wish they were together. Certain musicals date themselves through their music, but with ‘BRIGADOON’ and its title song and Gene Kelly’s “Almost Like Being in Love” are the best remembered. ‘BRIGADOON’ settles for being a good solid Hollywood musical entry with fantastic dance sequences by Gene Kelly and Cyd Charisse. It should also be applauded for utilizing the studio filmmaking techniques of the day to elevate the story as one both fantastical and tangible.

ONCE IN THE HIGHLANDS/BRIGADOON/DOWN ON MacCONNACHY SQUARE (uncredited) (Lyrics by Alan Jay Lerner) (Music by Frederick Loewe) [Sung by Eddie Quillan, Villagers and Off-screen M-G-M Chorus]

Blu-ray Image Quality – Warner Archive Collection presents us the film ‘BRIGADOON’ and does a completely outstanding 1080p image transfer that makes full use of the eye-popping Ansco Color and the film ‘BRIGADOON’ is also an amazing visual feast-as long as you respond to Vincente Minnelli’s amazing Ansco Color scheme. Despite its shortcomings, the Ansco Color hues are vibrant. Reds, while lacking the true and velvety blood red quality if the film had been shot in Technicolor are still pleasant to look at. Nevertheless it can look intense if slightly leaning towards an orange bias. Flesh tones are very natural looking. The main image we view tends to favour more earthy browns, beige and cornflower yellows. Check out the lemon shawl Cyd Charisse wears, which looks absolutely amazing. Contrast is markedly improved over the inferior DVD release. There is absolutely nothing to complain about this Blu-ray release.

Blu-ray Audio Quality – Warner Archive Collection brings us the film ‘BRIGADOON’ with an amazing 5.1 DTS-HD Master Audio experience and is crystal clear and is gorgeous. Gene Kelly and Cyd Charisse fans can rejoice at their decent singing while admiring their extraordinary dancing. The four-track stereo print master was consulted for reference, with the goal of replicating the original sonic style and audio mixing. The 5.1 audio mix is a beautiful experience with a rich orchestral presence and a clearly articulated immediacy to the singers voices. Stereo separation is distinct and pronounced, with voices routinely following the movement of characters onscreen between left and right sides of the television screen. The dialogue is very lifelike, natural and clearly audible. Frederick Loewe's composed melodies were orchestrated and supplemented by M-G-M's in-house orchestrator, Conrad Salinger. So all in all, Warner Archive Collection has done a really superb job on this totally magical film.

Special Feature: Outtake Musical Numbers Here we get to view four musical numbers that were cut prior to the cinema release and they are as follows:

Theatrical Trailer [1954] [1080p] [2.55:1] [3:45] This is the Original Theatrical Trailer for the film ‘BRIGADOON.’ The Metro-Goldwyn-Mayer studio was the master of hard sell, by playing up the creative connections between the films ‘BRIGADOON’ and ‘An American in Paris.’

Finally, the film ‘BRIGADOON’ to my mind is a true classic Hollywood musical that will charm you throughout the film until the end credits. Modern audiences may find the music slightly quaint and cringe at some of the balletic choreography by its male lead, Gene Kelly, which can feel starkly out of sync with today's popular hip-hop-inspired dance moves. But the film's technical quality cannot be disputed, with the brilliant music and lyrics by Frederick Loewe and Alan Jay Lerner, and direction by veteran Vincente Minelli, and produced by M-G-M musical guru Arthur Freed, to my mind you have a winner. The theatre production of “Brigadoon” opened on Broadway in 1947 and its success spawned this film and a 1966 television version of the same title. The suggestion is that modern life is bad and the old ways are good. Feminists will note that evil is blamed on women: witches threatened the village's tranquillity, and Tommy Albright and Jeff Douglas note that such women are still around plaguing humanity in New York. ‘BRIGADOON’ is a fairy tale that combines ‘Lost Horizon’ with ‘The Sleeping Beauty.’ The plot is very simple and the songs can seem slightly dated, but for me the romantic story and Cyd Charisse are delightful and the final message, “when you love someone, everything is possible, even a miracle” is so very true, profound and beautiful. So it definitely gets my very high praise endorsement and definitely gets a five star rating. Very Highly Recommended! 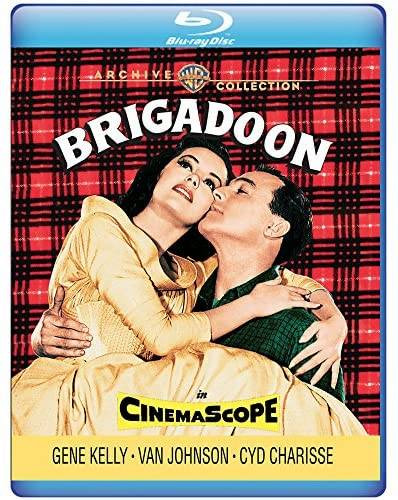 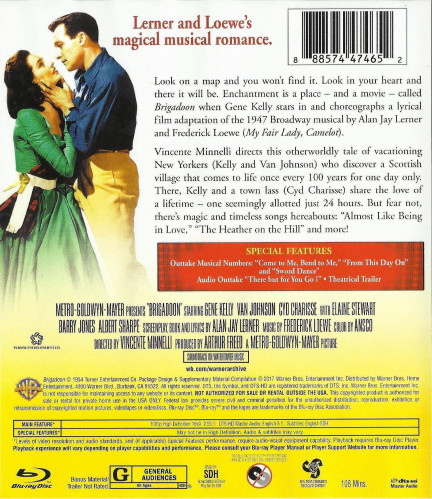