Eilis Lacey [Saoirse Ronan] moves from small town Ireland to Brooklyn, where she has the opportunity for work, for a future and love, in the form of Italian-American Antonio "Tony" Fiorello [Emory Cohen] with whom she becomes romantically involved. When a family tragedy forces her to return to Ireland, she finds herself drawn back into the life she left behind. As a secret threatens to reveal itself, Eilis Lacey has to confront a terrible dilemma and a heart breaking choice between two men and two countries.

FILM FACT No.2: ‘BROOKLYN’ was ranked 48th on BBC's 100 Greatest Films of the 21st Century. Principal photography began on 1 April 2014 in Ireland, and was shot for three weeks at different locations including Enniscorthy, Wexford, and Dublin. On the first day of shooting, Ronan was spotted in period costume on the set in Enniscorthy. After finishing production in Ireland, it then moved to Montreal, Quebec for four weeks further. Two days were spent shooting in New York at Coney Island.

Andrew’s Blu-ray Review: ‘BROOKLYN’ [2015] set in 1950s Ireland, Saoirse Ronan stars as young Irish woman Eilis Lacey, who is given the chance to move away from her tiny countryside village to the bustling streets of Brooklyn in New York. Once on dry land, and after a very bumpy journey across the sea, especially getting seriously seasick, Eilis Lacey settles down in the boarding house owned by Mrs. “Ma” Kehoe [Julie Walters], alongside several other giddy, giggling girls. With the homesickness coming on in huge waves, Eilis Lacey struggles to fit into American life, until she meets handsome Italian boy Antonio "Tony" Fiorello [Emory Cohen]. Swept up in young love, Eilis Lacey’s world is torn in two when Eilis Lacey is forced to return home to Ireland for a month, leaving Antonio "Tony" Fiorello behind and wondering if the love of his life Eilis Lacey will ever return to Brooklyn.

Once back in 1950s Ireland, Eilis Lacey finds that things have moved on since she originally left, with her friends pairing off and getting married. When Eilis Lacey is invited out for the day, and meets Jim Farrell [Domhnall Gleeson], a popular member of the community from a wealthy family. It’s clear they are a perfect match, but where does Eilis Lacey’s heart lie? At home in Ireland, or back across the ocean in Brooklyn?

Director John Crowley has gone above and beyond when shooting Brooklyn, making it sumptuous to watch, as if you’ve really travelled back to 1950s New York. Its crisp, beautiful cinematography is hard to take your eyes off of, leaving you to soak in as much as you can before the next frame. Paired with a stunning soundtrack, it’s an immersive experience, something to be enjoyed and absorbed.

But what really makes the film ‘BROOKLYN’ worth it are the performances from the cast. Saoirse Ronan is pure perfection, with the role of Eilis Lacey letting her really show her worth. Flitting between shyness, enthusiasm, heartbreak and joy, Saoirse Ronan is beautiful inside and out – if anything, watch it just for her performance alone. Emory Cohen as Antonio "Tony" Fiorello is, again, a marvel to watch, with his smooth Brooklyn accent and gorgeous smile. Paired together, Saoirse Ronan and Emory Cohen are truly wonderful actors. Julie Walters as the God-fearing, sarcastic Mrs. “Ma” Kehoe is totally hilarious, while Jim Broadbent plays the gentle Irish giant Father Flood, but all in all Eilis Lacey’s is a guiding light when the young lady is out afloat in New York.

‘BROOKLYN’ is a tale of blossoming young love, and finding out that home isn’t always where you expect it to be. Highly recommended, and a very worthy of its numerous nominations. ‘BROOKLYN’ as the winner of the BAFTA® Awards for ‘Best British Film’ and nominated for three Academy Awards® and it is clear that ‘BROOKLYN’ is a really special and beautiful film. Give it a chance and you’ll see exactly why I loved it 100% and definitely a film I will treasure forever and I definitely want to view again and again, but also be prepared to get the Kleenex tissues out, as you will need them, as you will experience a massive amounts of rollercoaster emotions.

A GARDEN IN THE RAIN (Written by Carroll Gibbons and James Dyrenforth) [Performed by John Carty, James Blennerhassett, Seamus O'Donnell and Jim Higgins]

WHAT’S IT TO YOU, JACK? (Written by A Jacquest and J Carter) [Performed by Linda Hayes]

Blu-ray Image Quality – ‘BROOKLYN’ comes to this Blu-ray disc via LIONSGATE and BBC Films with a wonderful looking 1080p encoded image transfer with an equally impressive 1.85:1 aspect ratio that really shines across the board. The film is heavily romanticized both in story as well as visual appeal, opening up the film with a rather grey and misty looking tone that shifts to a more natural colour grading as the film progresses. Certain parts of the film have some brilliant white levels that go into the nice ambient category to give a sort of halo effect to the sequences, the biggest one being on the Ellis Island sequence where the whites are so bright as to almost simulate a heavenly glow. At those moments and a few bits on board the transatlantic flight I noticed some softness due to a green screen effect, especially the water, but overall the fine detail is simply superb. ‘BROOKLYN’ is not colour graded but the primary colours tend to be slightly saturated and seem to pop out off the screen at any given time, especially in Brooklyn in New York. Eilis Lacey [Saoirse Ronan] green overcoat is brilliant in its contrast to the greyish stone of Brooklyn and the cars whizzing by just seem to stand out off the screen with sharp blues and yellows and reds. Eilis Lacey lipstick stands out the most and highlights the pale Irish face behind it, making her all the more adorable. Black levels are consistent and there are few moments where the white colures are quite prominent at times. Please Note: Playback Region B/2: This will not play on most Blu-ray players sold in North America, Central America, South America, Japan, North Korea, South Korea, Taiwan, Hong Kong and Southeast Asia. Learn more about Blu-ray region specifications.

Blu-ray Audio Quality – The ‘BROOKLYN’ audio comes to you with a 5.1 DTS-HD Master Audio track and it is exactly what one would expect from a romantic drama like ‘BROOKLYN.’ It doesn’t have the complexity and overwhelming intensity of an action film or other more immersive style of film, but it does exactly what it is asked of it and is extremely effective on the smaller scale that its niche is. The dialog is the mainstay of the track and every word, whether it be in a heavy Brooklyn accent, and Irish one or even the thick Italian ones that Tony and his immigrant family speak in are perfectly intelligible at all times. There is quite a bit of ambiance in the big city as well as the country town that Ellis Lacey grew up in overseas, and they all integrate nicely into the surround channels in a more subdued and soft fashion. Certain scenes punctuates with a little oomph, otherwise it comes in to accentuate the melodic score that flows throughout the track. It’s a simple track, but a very effective one that brings the film to life.

Special Feature: Interviews [2015] [1080p] [1.85:1] [7:35] Here you have a selection of two in-depth interviews from people who were intimately involved with the film ‘BROOKLYN’ and how it affected them in different ways. The two people we get to view being interviewed are Saoirse Ronan [Eilis Lacey] and Colm Tóibín [Writer]. As per usual, you can either watch each interview separately or Play All.

Special Feature: Featurette: ‘BROOKLYN’ [2015] [1080p] [1.85:1] [5:40] This is a really beautifully presented in-depth documentary look at the film ‘BROOKLYN’ and all who were affected with being involved with the film and basically informing us the meaning of the film and what it meant intimately to everyone who was involved with the film. It is broken up into different categories entitled “TWO COUNTRIES;” “TWO LOVES” and “ONE HEART.” Contributions include: Colm Tóibín [Writer]; Jim Broadbent [Father Flood]; Saoirse Ronan [Eilis Lacey]; Nick Hornby [Screenwriter]; Julie Walters [Mrs. Kehoe]; John Crowley [Director]; Domhnall Gleeson [Jim Farrell]; Emory Cohen [Tony] and Jessica Paré [Miss Fortini]. We also get plenty of nice clips from the film and also nice behind-the-scenes filming. Despite being very short, it is still worth a view and is presented in a very professional way.

Finally, what can one say about this beautiful film and of course you will simply say that, ‘BROOKLYN’ was one of the biggest surprises in 2015 that I have viewed in the last 6 months or so. I had heard rumours prior to the press release and was instantly intrigued to see Saoirse Ronan in an adult role. Sweet, laid back and entirely heart-warming in a non-cloying sort of way, ‘BROOKLYN’ is a fantastic beautiful love story that can appeal to both men and women equally with its simple storytelling. The set pieces and locations are sumptuous and visually stimulating and the specs on the Blu-ray make it almost “reach through the screen and touch it” worthy of all the Awards it received and deservedly so and is definitely worthy of a watch. In some ways ‘BROOKLYN’ feels like a film that’s not just about life in general at the period it is set in, but also from, a more innocent age. Though the country to which Eilis Lacey emigrates is the America of the Korean War and the Red Scare, we get no hint of those national traumas, and potential racial tensions are defused in the comedy of irrepressible little brother Frankie’s announcement, when Eilis Lacey arrives at the family apartment, that “the Italians hate the Irish.” But this side lining of harsher elements is perhaps only to be expected in a film that takes a conventional romantic set-up and, and definitely elevates it to a more intelligent dramatic level of award winning performances. Very Highly Recommended! 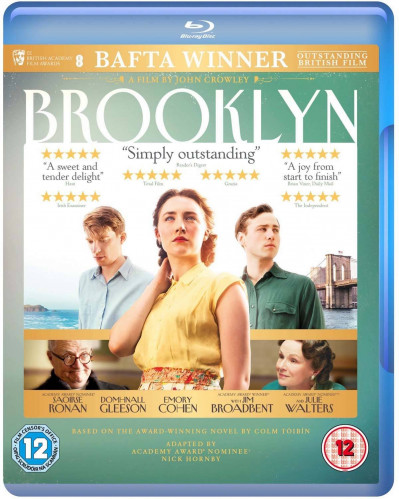 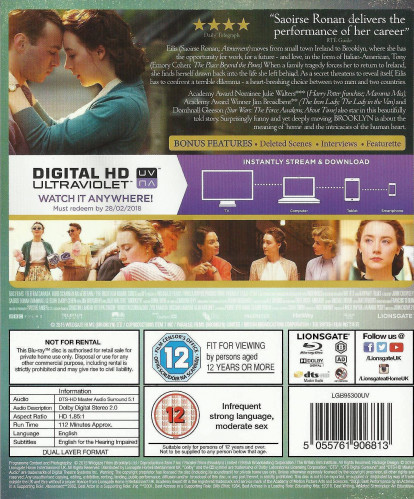