New York, 1929: a war rages between two rival gangsters, Fat Sam [John Cassisi] and Dandy Dan [Martin Lev]. Dandy Dan is in possession of a new and deadly weapon, the dreaded “splurge gun.” As the splurge flies, Bugsy Malone [Scott Baio], an all-round nice guy, falls for Blousey Brown [Florrie Dugger], a singer at Fat Sam’s speakeasy. Bugsy Malone has designs on Blousey Brown are disrupted by the seductive songstress Tallulah [Jodie Foster] who wants Bugsy Malone all for herself. With an all-child cast placed in a mobster era, armed with custard instead of bullets and belting out some superb songs, this is simply entertainment at its best!

FILM FACT No.2: ‘BUGSY MALONE’ was Sir Alan Parker's first feature film. Sir Alan Parker was trying to find a film project that was not "parochial" and decided upon an American gangster setting: "I had four young children and we used to go to a cottage in Derbyshire at weekends. On the long, boring car journey up there, I started telling them the story of a gangster called Bugsy Malone. They’d ask me questions and I’d make up answers, based on my memories of watching old movie reruns as a kid." Alan Parker's eldest son suggested children should be cast as the "heroes." The director chose to cast several unknown actors in the film. The film was rehearsed and shot in England, largely on Pinewood Studios' "H" stage, with locations in Black Park Country Park, Wexham in Buckinghamshire and Reading, Berkshire.

Andrew's Blu-ray Review: ‘BUGSY MALONE’ [1976] is Screenwriter/Director Sir Alan Parker's utterly delightful, very tongue-in-cheek love letter and homage to the gangster film genre. With a cast entirely composed of under-16 year olds, the film traces the turf war between two rival gangs, one, headed by the  aptly-named Fat Sam, boss of the Grand Slam Speakeasy joint; the other by the shady, pencil-moustached Dandy Dan. It is 1929 in Gotham, a vicious mob war is tearing the city apart. One man is caught in the middle. So begins, Screenwriter/Director Sir Alan Parker's utterly delightful, tongue-in-cheek love letter to the gangster film genre.

Here we find small boys who talk like Al Capone. Young girls are dressed in flapper dresses. Machine guns that only fires whipped cream. That's the bizarre genius that is a 1976 film musical with a unique take on  prohibition-era Chicago. As if you don't know, Scott Baio stars as Bugsy Malone, a wise-guy who gets tangled up in a local gang rivalry, while a 14-year-old Jodie Foster is Tallulah, singer at the local speakeasy. Ridiculous, of course it is, and that is why we love the film so much and of course the premise is bonkers but it worked a treat, and of course launching British director Sir Alan Parker onto the Hollywood A-List status and introducing a very young Jodie Foster to the world as the vamp speakeasy songstress Tallulah.

That said, here we have the brilliant director Sir Alan Parker and producer David Puttnam, who knew that casting young adults alone would not carry the film on its own, which of course turned out to be totally rock-solid in every department. Sir Alan Parker's script is as sharp as any wise guy’s suit, and his attention to the genre period is a constant joy, and Sir Alan Parker even coaxes totally professional poised performances from his brilliant professional young performers, in particular John Cassisias as Fat Sam, and Jodie Foster as Tallulah, while generally side-stepping any kind of stage-school nauseating performances.

The film is a veritable treasure-trove of remarkable young talented cast carries the film effortlessly. The humour has something of a choreographed slapstick sequences, and the prepubescent cast pretending to be adults isn't quite as disconcerting in itself as Jodie Foster's charged performance as gun moll Tallulah. Almost 30 years later, the film still holds up, within inspired set designs, wonderful costume designs and brilliant musical compositions that place it among the finest of the 1970s decade.

It was at the time very difficult to imagine that writer/director Sir Alan Parker and producer David Puttman thought that audiences would not go a Musical spoof of Prohibition-era gangster comedy, which takes a standard Depression-era gangster movie template and turns it into a musical performed entirely by children and it works so well as a tongue-in-cheek gangster comedy with a massive helping of wonderful tuneful musical songs and is helped with an outstanding performance with a very young and talented Jodie Foster.

‘BUGSY MALONE’ is a gloriously inventive, entertaining gangster movie pastiche, with kids as mobsters and molls, driving pedal cars and splurge guns that fire stuff that resembles a custard-pie mix. Future star names include Scott Baio as the hero and, and in particular Jodie Foster as the speakeasy vamp who was reportedly furious when her big number “My Name is Tallulah” was dubbed by a professional singer. The songs and set pieces are still fresh and infectious and most of the young adult cast are mesmerisingly good. I defy anyone not to be caught up in the charm and nostalgia that works so well is down to the high quality chosen youngsters,  the elaborate production design built across Pinewood stages, and an excellent set of songs by Paul Williams.  Of course, it is cheesy as hell, but the film has earned its merit over the many years since its release in 1976 and you can’t help but smile along. So all in all, I love this film, especially ever since I viewed in the cinema and a great honour to add this to my ever increasing Blu-ray Collection.

MY NAME IS TALLULAH (Written by Paul Williams)

SO YOU WANNA BE A BOXER (Written by Paul Williams)

DOWN AND OUT (Written by Paul Williams)

Blu-ray Image Quality – The Rank Organisation and ITV Studios Home Entertainment brings us a stunning remastered 1080p image presentation and equally enhanced with 1.85:1 aspect ratio that really shows off this film, to look even better than when the film was released in the cinema in 1976. The colours are lush, convincing, and very natural looking, and in doing so give great details and reflections of Sir Alan Parker's vision of a stylized gangster saga where dark alleys and smoky bars serve as a major role in making us believe it is the real thing and also giving us a great atmosphere. This new upgraded Blu-ray release offers a very film-like look and what a cinema film buffs expect to see with a film of this calibre. What about the actual Blu-ray disc by ITV, the quick answer is, this is the best ever I have seen of the ‘BUGSY MALONE’ film and on top of all this, it is a totally perfect Blu-ray disc and far superior of the inferior DVD version currently on the market and one that retains The Rank Organisation original lab work, giving us a superb at times exceptionally sharp look, and the colours look bright and accurate. So, if you have even the slightest of interest in Alan Parker's imaginative gangster saga, don't torture yourself, this is a must have Blu-ray disc, because once again, this is a very natural looking presentation which I certainly enjoyed a great deal and so well done The Rank Organisation and ITV Studios Home Entertainment for your sterling professional work on this brilliant Blu-ray disc. Please Note: Playback Region B/2: This will not play on most Blu-ray players sold in North America, Central America,  South America, Japan, North Korea, South Korea, Taiwan, Hong Kong and Southeast Asia. Learn more about Blu-ray region specifications.

Blu-ray Audio Quality – The Rank Organisation and ITV Studios Home Entertainment presents us with the wonderful and natural sound experience in 5.1 DTS-HD Master Audio. This is a very clean and very well balance soundtrack mix, which helped to give us a very pronounced dialogue presentation, and especially when it came to the musical numbers, especially from the child actors miming to the actual adult singer, was perfectly executed, also I really enjoyed the audio experience with the battle scenes and especially with the sounds of the splurge guns being used against the child actors when they get “splurged.” Overall, this is a very balanced audio experience and no major sound issues to report. So once again, this is a brilliant and excellent audio presentation and all done in a very professional way via The Rank Organisation and ITV Studios Home Entertainment for their best ever work done on this brilliant Blu-ray disc.

Special Feature: Art Gallery [1976] [1080p] [1.37:1] [1:02] Here we get to view a series of brilliant hand drawn colour  illustrated storyboards of a rough outline for certain scenes in the film ‘BUGSY MALONE,’ and as you view the images, you get to hear one of the songs written, composed and sung by Paul Williams.

Special Feature: From Sketch to Screen [1976] [1080p] [1.37:1] [4:06] With this special feature, it should really be entitled ALAN PARKER’S SCRIBBLES TO SCREEN and here we get to view a series of very rough hand drawn black-and-white storyboard sketches of the outline for the film ‘BUGSY MALONE’ and at the same time it is synched to the films soundtrack, especially relating to what you would be viewing of the actual film, but only up to the point where we enter Fat Sam’s Grand Slam Speakeasy joint.

Special Feature: Photo Gallery [1976] [1080p] [1.37:1] [1:56] Here we get to view a selection of wonderful rare black-and-white promotional and behind-the-scene photographs. In the background we get to hear the sad melodic song that the character Blousey Brown [Florrie Dugger] sings in the film, which the actress had to mime to the recording of the real singer.

Special Feature: Promo Reel [1976] [1080i] [1.85:1] [6:47] Here we are introduced to Fat Sam [John Cassisias] in a rare in-depth promotional short film for the ‘BUGSY MALONE’ film, and of course we get to view loads of clips from the film to give you a flavour of what you get to view when you finally get round to seeing the film ‘BUGSY MALONE.’ We also get some input from the actors Jodie Foster [Tallulah], Florrie Dugger [Blousey Brown] and Scott Baio [Bugsy Malone].

Finally, ‘BUGSY MALONE’ is a delightful magical film that really swings and especially seeing all the young actors mime to grown-up pre-recordings, meaning that the boy’s voices comically plummet a dozen octaves as soon as they start crooning. But this only adds to the total delightful fun, and with such wonderful melodic irresistible tunes by the brilliant tune smith Paul Williams. Anyway who really cares, it is a totally magical delightful viewing experience. Sure, some of the performances are distinctly Year Nine drama class, but the whole idea is so gloriously weird it doesn't matter and is totally thrilling and simply nothing like it has been done or been seen before. The great set piece songs and splurge gun attacks at Fat Sam's Grand Slam speakeasy, and Scott Baio's utterly winning performance as the delightful and engaging Bugsy Malone, ensure this film musical is guaranteed to inspire those warm Sunday afternoons, where the whole family enjoy sitting around watching the television kind of feeling. And there is proof that there is some justice in Hollywood; Jodie Foster, the only old child actor who went onto achieves full-blown mega-stardom, who sometimes acts her small co-stars off the screen. So all together now: "We could have been anything that we wanted to be and it’s not too late to change. You give a little love and it all comes back to you (da da da ra da da da)." Highly Recommended! 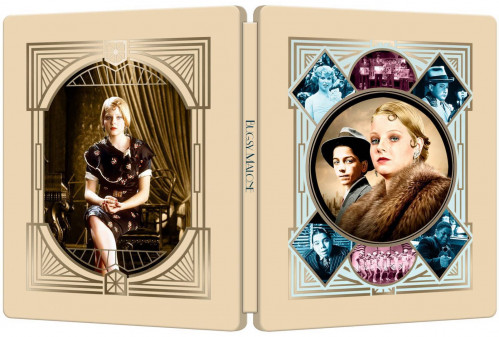 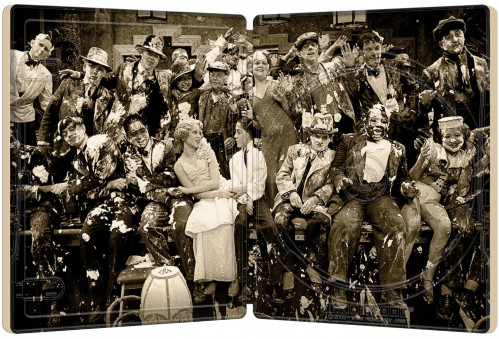