Lots of laughs and great songs have made this all-time favourite based on the hit Broadway show one of the most memorable musicals of all time. When rock star and teenage heartthrob Conrad Birdie [Jesse Pearson] gets drafted, the nation’s teenagers go haywire and Conrad Birdie’s songwriter, Albert F. Peterson [Dick Van Dyke], faces unemployment. So Albert F. Peterson and his girlfriend Rosie DeLeon [Janet Leigh] organize a nationwide contest in which one lucky girl wins a farewell kiss from Conrad Birdie on “The Ed Sullivan Show.” Kim McAfee [Ann-Margret] turns out to be the lucky teenager and Conrad Birdie’s whole entourage moves into her quiet Midwestern home much to the chagrin of her ever-irritable father Harry McAfee [Paul Lynde] and her jealous boyfriend Hugo Peabody [Bobby Rydell]. The result is chaos and a series of hilarious romantic complications.

FILM FACT No.2: Several significant changes were made in the plot and character relationships in the film from the stage version. The film was rewritten to showcase the talents of rising star Ann-Margret, adding the title song for her and dropping songs by certain other characters. Ann-Margret originally signed on to sing two songs gets to sing five, as Janet Leigh’s load is lightened by director George Sidney and Janet Leigh becomes a supporting character while Ann-Margret’s part is enlarged as she becomes the star –something the older Janet Leigh was not pleased about. According to Ann-Margret, she was cast when director George Sidney saw her dancing while on a date at the Sands Casino on New Year's Eve 1961. Ann Margret was paid $3,500 a week and earned $85,000 in all.

Andrew’s Blu-ray Review: ‘BYE BYE BIRDIE’ [1963] is a totally hilarious and quirky musical with catchy songs and energetic dances. This musical is fun to watch and sing along with. The film stars many high profiled people like Dick Van Dyke and Ann-Margret.

‘BYE BYE BIRDIE’ is based on the long-running hit 1960 Broadway play by Michael Stewart and is written by Irving Brecher. Director George Sidney (‘Pal Joey’/ ‘Anchors Aweigh’/ ‘Show Boat’) does a good job keeping it energetic, breezy and fun-filled. The film’s surprise is the brilliant casting of the 22-year-old Ann-Margret to play the ditzy sparkplug 16-year-old heroine, Kim McAfee, a part which paves the way for her future stardom. The film was released shortly before the assassination of President John F. Kennedy, and with that tragic historical moment the American innocence projected here would disappear forever in a divided country heading down a long road of war protests and civil rights unrest.

The convoluted plot is about the Elvis type of gyrating rocker, Conrad Birdie [Jesse Pearson], drafted into the army and his girl fans hysterically protesting via song. Taking advantage of this situation is the ambitious secretary, Rosie DeLeon [Janet Leigh], for struggling song writer Albert F. Peterson [Dick Van Dyke], who persuades Ed Sullivan as a publicity stunt that during Birdie’s farewell performance on “The Ed Sullivan Show” he lavishes a final goodbye kiss to Kim McAfee [Ann-Margret], a member of his fan club from Sweet Apple, Ohio. The kiss is meant to be a “symbolic kiss” to all his girl fans, and is to take place in Sweet Apple.

Albert F. Peterson [Dick Van Dyke] is a bio-chemist, whose domineering mother Mama Mae Peterson [Maureen Stapleton], a former vaudeville performer, wants him in showbiz even though he would probably earn a good living as a bio-chemist. Mom also interferes with sonny boy’s relationship with Rosie DeLeon [Janet Leigh], and the plucky secretary hopes that the song will give him enough royalties so her momma’s boy boyfriend will have enough guts to cut his mother’s apron strings and marry her.

The rocker Conrad Birdie is clearly a parody of Elvis, and Birdie’s first name is lifted from another twisting rocker named Conway Twitty. The only problem is that the parody didn’t make sense, since Elvis had a rep of being a good guy and you got me what it had to do with Conway Twitty.

Dick Van Dyke and Paul Lynde reprise the roles they had on the Broadway stage. Paul Lynde nearly steals the pic as Kim’s irritable father, worrying about how the kiss might adversely affect his local fertilizer business. While singer Bobby Rydell replaces Michael J. Pollard from the stage show, as Kim McAfee’s jealous hometown boyfriend Hugo Peabody, and makes good use of his pleasant singing voice.

Ann-Margret got the launch of a lifetime in ‘BYE BYE BIRDIE.’ George Sidney's 1963 film adaptation of the hit 1960 Broadway musical. Though not the starlet's first film, ‘BYE BYE BIRDIE’ emphatically showcased Ann-Margret's youthful sex appeal, and while opinions differ as to whether the film does justice to its source material, one can't deny it's an energetic and tuneful musical romp.

Paul Lynde as Harry McAfee is of course hilarious, and the sped-up Russian ballet scene also had me laughing. This is one of those rare musicals that you could remove the music, and it would be able to stand on its own as a comedy.

Of course, a standout number is “The Telephone Song,” with tons of teenagers calling and dancing about Kim McAfee and Hugo Peabody played by Ann-Margret and Bobby Rydell now going steady. This happens at the beginning of the film, but I really think it’s the highlight. It’s colourful and presented in a really cool way.

Outside of this film being just plain silly fun, it’s important for us to remember the careers of some of the actors in ‘BYE BYE BIRDIE’ especially making Ann-Margret a star and Ann-Margret had also been in two films prior to this film, but this is the one that made her really famous and now is your chance to enjoy the starlets performance.

BYE BYE BIRDIE (Music by Charles Strouse) (Lyrics by Lee Adams) [Performed by Ann-Margret before the title credits, with Johnny Green and the Columbia Studio Orchestra and Chorus] [Reprised by Ann-Margret in the finale]

THE SHRINER’S BALLET (Music by Charles Strouse) (Lyrics by Lee Adams) [Performed by Janet Leigh, along with the Shriners]

(Everything Is) ROSIE / (Everything Is) HUGO (Music by Charles Strouse) (Lyrics by Lee Adams) [Performed by Janet Leigh, Dick Van Dyke, Ann-Margret and Bobby Rydell]

Blu-ray Image Quality – Columbia Pictures and SONY Pictures presents us the film ‘BYE BYE BIRDIE’ with a great 1080p image and is shown in the marvellous anamorphic 2.35:1 aspect ratio and with the Sony’s due diligence in hi-definition yields an exemplary presentation with virtually no complaints. The image quality here is virtually identical to the Twilight Time 2014 Blu-ray release. That said it continues to look amazing on this Blu-ray with rich and vibrant in its Technicolor hues and fantastically detailed with a consistent smattering of light film grain. Age-related artefacts are a non-issue. Contrast is excellent. Even the optical used during “The Telephone Hour” have been brought into line, properly colour balanced, and, looking incredibly textured. What a welcomed rarity, especially as the visuals are smooth and creamy, the palette of fifties’ pastels, further complimented by very accurate flesh tones. Wow, doesn’t begin to describe the way things look.  You are going to love – LOVE – this transfer.

Finally, ‘BYE BYE BIRDIE’ may not accurately represent the warm nostalgia that its Broadway original had for the 1950’s in spades, some of the songs still hold up. And Ann-Margaret in raging Technicolor is never a waste of your time. The film is a wonderfully energetic and colourful adaptation of the smash Broadway hit, satirising the traumatic induction of one Elvis Presley into the US Army. The Blu-ray comes highly recommended for fans of this musical film who do not already own the Twilight Time’s Blu-ray release of old. Highly Recommended! 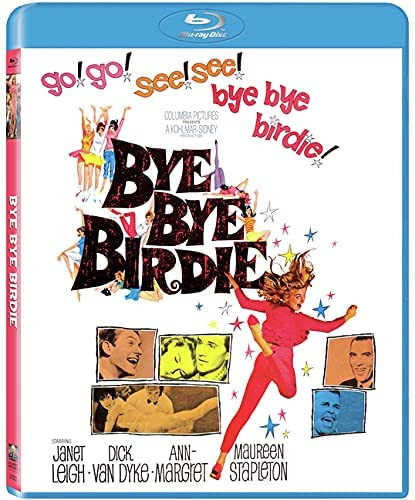 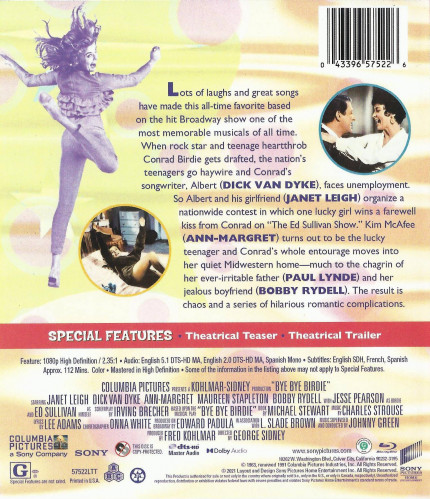