With gadgets, gaming and girls galore, this camp classic is not only the coolest of the spy films, but it's also a brilliant parody of itself!

Will the real "James Bond" please stand up? When secret agency chief "M" [John Huston] is killed, James Bond [David Niven] is thrust out of spy retirement to help smash SMERSH, the band of hit men who are likely responsible. And to protect his real identity, Bond's name is given to numerous other agents, including Evelyn Tremble [Peter Sellers] and Bond's neurotic nephew, Jimmy [Woody Allen]. With five directors, a cast of Hollywood icons that also includes Ursula Andress, Charles Boyer, Peter O'Toole, Jacqueline Bisset and Orson Welles, a soundtrack by Burt Bacharach and a frisky, farcical script, ‘CASINO ROYALE’ is Bond. Psychedelic Bond.

FILM FACT No.2: Burt Bacharach's musical score was praised, earning him an Academy Award® nomination for the song "The Look of Love" and was performed by Dusty Springfield.

Andrew's Blu-ray Review: At the height of the James Bond craze in the mid-sixties, the studio executives at Columbia Pictures desperately wanted to capitalize on the 007 phenomenon, but Harry Saltman and Albert "Cubby" Broccoli, who had a distribution deal with United Artists that owned the rights to every Ian Fleming novel except one ‘CASINO ROYALE,’ which had been acquired by producer Charles K. Feldman in 1967. A deal was struck to create the biggest James Bond extravaganza of all time, but the resulting film was something else entirely a wildly uneven parody that required the services of five directors, countless screenwriters, and a cast of international actors and celebrities, many of them reduced to fleeting cameo appearances.

In the early days before Albert Broccoli and Harry Saltzman were in the picture, Ian Fleming's first James Bond title had been sold to Charles K. Feldman for a substantial sum. The bad news is that it would take fifteen years to make it to the big screen. By that point, five James Bond films were already out and there seem to be no hope to make an alternate James Bond picture. The filmmakers in their infinite wisdom decided to scrap the storyline, keep the title, and make a spy spoof which had been making lots of money at that time with the success of the Matt Helm and ‘Our Man Flint’ films. With Charles K. Feldman’s agent connections, he established an all-star cast not to mention five directors to make the ultimate wide spy spoof with the number of 007 attached to it. The result was ‘CASINO ROYALE.’

It's a dark time for the spy world. Five agents go to a remote spot to one car to seek out bringing Sir James Bond [David Niven] out of retirement for his assistance. Unfortunately, James Bond has been living a modest life and does not much care about the spy world as he used to. That is, until an attempt on his life at his residence claims the life of his former boss "M" [John Huston] whose only remains happen to be his toupee. After some careful thought at his former boss' residence, he takes over his superior's position to counteract on the mysterious deaths within the organisation using his moniker for recruits to use in order to confuse the organisation known as SMERSH and its chief enemy Dr. Noah [Woody Allen]. This includes a baccarat expert Evelyn Tremble / James Bond 007 [Peter Sellers] and his long lost daughter with Mata Hari. Together they infiltrate their main hideout which is under the cover name "Casino Royale."

It was best that a familiarity with the ‘Our Man Flint’ series and the Austin Powers films are enough to satisfy with this all star vehicle. The wackiness, plus the use of the kind of jokes that you don't know whether to laugh or whether we are supposed to think they are trying to be serious? A lot of the craziness going on in this film makes a viewer wonder if the filmmakers were all on something during the production. Nonetheless, it's a psychedelic spy spoof with a nutty sense of some of the previous Bond films as well as brandishing its own brand of cool, thanks to a solid music score by Burt Bacharach and Herb Alpert and the Tijuana Brass.

The look of the sets in this film is quite breath-taking and full of colour and uses a wonderful stained glass palette that let all the colours explode out sixties style. As for the performances, they all range from being in the movie a little while to a glorified cameo to some uncredited that do surprise and make me grin at their use in this film. All is different in this incarnation of James Bond and 007, and this multi-directed film came with much criticism and was not looked on too highly at the time. It was also not a box office success. However in this day and age when spoofing the sixties is a happening, in trying to get away from the traditional James Bond series and instead getting into its own groovy mould.

By the end, the budget the film ‘CASINO ROYALE’ had swollen from its initial cost of $12 million to more than twice that amount. And no wonder the costs were high considering the extensive locations that included Paris, the South of France, West Berlin, Ireland, and the Pinewood and M-G-M-British studios in England. The mammoth slapstick climax alone, featuring Jean-Paul Belmondo as a French Legionnaire, George Raft as himself, and countless famous faces and cost $1 million and took two months to shoot! Yet, despite the film's troubled production history, there is fun to be had amid the insanity, everything from Scottish comedian Ronnie Corbett as a robot with a German accent to the lovely Jacqueline Bisset as Miss Goodthighs. So, if you want to experience the Hollywood-style Sixties, this is the ultimate pit stop and an enjoyable one was had by all.

‘CASINO ROYALE’ was a big box-office hit and it's not hard to find passionate fans of the film due to its oddball and chaotic structure; it's closer to a sixties "happening" than a major studio release. After all, what's not to like about a film that features a Burt Bacharach film music score performed by Herb Alpert and the Tijuana Brass, and especially the amazing Dusty Springfield singing "The Look of Love," while Ursula Andress seduces Peter Sellers, and Woody Allen is in one of his first screen roles as the megalomaniac Dr. Noah (billed as "the tallest dwarf in the world"), lavish special effects, and groovy art direction with all the psychedelic trappings one is looking for in a madcap film like ‘CASINO ROYALE’ and a plethora of oddball James Bond?

HAVE NO FEAR, BOND IS HERE (Music by Burt Bacharach) (Lyrics by Hal David) [Performed by Mike Redway]

Blu-ray Image Quality – With the film ‘CASINO ROYALE’ we are presented with an awesome 2.35:1 aspect ratio and an even more stunning 1080p image which is about the most inconsistent that I've encountered on Blu-Ray, then again I've never seen a film with half a dozen directors, either. Image quality varies from scene to scene, but it's a reflection of the source material I'm sure. Though the image detail has been improved slightly over the previous inferior DVD format release, there's still a bit of edge enhancement that I noticed. Still, it's what I believe to be a step up from the previous inferior DVD release and if this kind of film that floats your boat and then you should find a nice home next to the "real" James Bond films in your collection.

Blu-ray Audio Quality – The ‘CASINO ROYALE’ Blu-ray disc brings us a 5.1 DTS HD Master Audio track, but let's not get too excited? The Audio has been cleaned up a bit and though this title in no way competes with the newer soundtracks, does have a moment or two of greatness. Take "greatness" with a grain of salt, if you please. Dialogue sounds nice and natural with little to no distortion. It's about as close to a mono track as you can get without actually being mono. Still, it's not a horrible or unlistenable mix and for that and I'm very pleased. So all in all a good effort all round on the part of 20th Century Fox.

Audio Commentary with Bond Historians Steven Jay Rubin and John Cork: Steven Jay Rubin is author of The Complete James Bond Encyclopaedia, and John Cork has co-authored several books about Bond, as well as biographies of Ian Fleming, Albert "Cubby" Broccoli and Harry Saltzman. Cork has also co-produced many of the documentaries included on the "ultimate" Bond DVDs. Between them, Steven Jay Rubin and John Cork provide a wealth of detail not only about ‘CASINO ROYALE’ and its troubled history, but also about film history in general and various personalities both in front of and behind the camera. The commentary often takes on a "six degrees of James Bond" quality, as the speakers riff on the subsequent careers and chance connections of people involved in the film. Example: Woody Allen appeared in ‘CASINO ROYALE’ and did uncredited writing work. In 2006,  Woody Allen was nominated for a screenwriting OSCAR®, as was Paul Haggis, making it the only year when two writers who had worked on the same James Bond story were nominated for an OSCAR® together.

Finally, this 1967 ‘CASINO ROYALE’ definitely inspires a “cult” appreciation. Similar to its finale – this remains a jumbled mass of bubbles and jolly japers fun. If you can allow the fun to sweep over you rather than scrutinize it – you will definitely be better-off for your viewing experience. Plots don't always have to make sense – and looking at ‘CASINO ROYALE’ is a slightly disjointed “runaway production” that kind of adds to its kitsch. I liked the performances and all the tongue-in-cheek and the sexy 1960's ladies like Ursula Andress, Joanna Pettet, Daliah Lavi and Jacqueline Bisset etc., plus Burt Bacharach's peppy composed theme music gives it some real joy. This Blu-ray, in my opinion, represents the best it's going to get for this psychedelic James Bond film. So come on and have some fun... the price encourages it and is a total honour to add this to my ever growing James Bond Blu-ray Collection as it is a total fun ride throughout its 125 minutes running time. Highly Recommended! 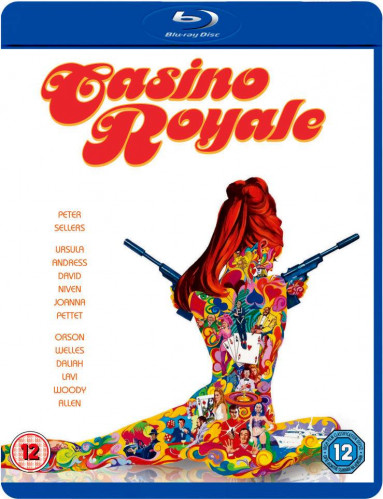 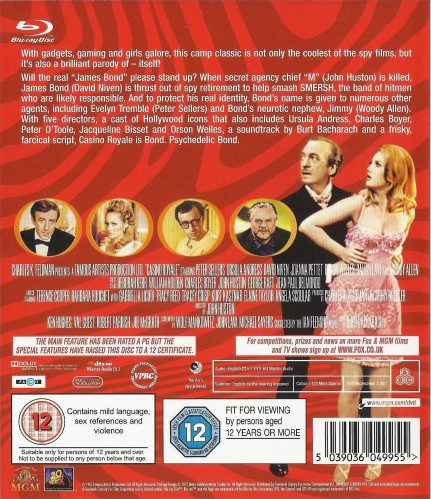