“I'm not living with you,” Maggie snaps at Brick. “We occupy the same cage, that's all.” The raw emotions and crackling dialogue of Tennessee Williams' 1955 Pulitzer Prize play rumble like a thunderstorm in this film version, whose fiery performances and grown-up themes made it one of 1958's top box-office hits.

FILM FACT No.2: The original stage production of “Cat on a Hot Tin Roof” opened on Broadway on the 24th March, 1955, with Burl Ives and Madeleine Sherwood in the roles they subsequently played in the film. Ben Gazzara played Brick in the stage production and rejected the film role. Athlete turned film star Floyd Simmons also tested for the role. Lana Turner and Grace Kelly were both considered for the part of Maggie before the role went to Elizabeth Taylor. Production began on the 12th March, 1958, and by the 19th March, 1958, Elizabeth Taylor had contracted a virus which kept her off the shoot. On the 21st March, 1958, Elizabeth Taylor cancelled plans to fly with her husband Mike Todd to New York, where he was to be honoured the following day by the New York Friars' Club. The plane crashed, and all passengers, including Todd, were killed. Beset with grief, Elizabeth Taylor remained off the film until the 14th April, 1958, at which time she returned to the set in a much thinner and weaker condition. The music score, "Love Theme from Cat on a Hot Tin Roof," was composed by Charles Wolcott in 1958. Charles Wolcott was an accomplished music composer, having worked for Paul Whiteman, Benny Goodman, Rudy Vallee and George Burns and Gracie Allen. From 1937 to 1944, he worked at Walt Disney Studios. In 1950, he transferred to Metro-Goldwyn-Mayer Studios where he became the general music director and composed the theme for ‘CAT ON A HOT TIN ROOF.’ The remaining songs on the soundtrack are composed by a variety of artists such as André Previn, Daniel Decatur Emmett and Ludwig van Beethoven.

Andrew’s Blu-ray Review: ‘CAT ON A HOT TIN ROOF’ [1958] was directed by Richard Brooks positively sizzles thanks to Paul Newman and Elizabeth Taylor’s chemistry. It’s as electrifying today as when it was first released. There’s no doubt it has stood the test of time. Based on the 1955 Pulitzer Prize winning Tennessee Williams play, “Cat on a Hot Tin Roof” was adapted by the director Richard Brooks and writer James Poe. The two men crafted a screenplay that would initially be dismissed by Tennessee William’s as it cut  the tones of homosexuality and softened some of the story’s racier elements. Although Tennessee Williams did not approve, audiences around the world did.

The story finds our characters in the heat of a loveless marriage, the end of careers and part of a family’s desperate money grab. Brick Pollitt [Paul Newman] is in the throes of a post athletic midlife crisis. His wife, Maggie "the Cat" Pollitt [Elizabeth Taylor] is keen to rekindle her husband’s lost affection. Between the bottle and the past, Brick Pollitt finds himself in a nasty bout of depression, made worse by his visit to his father Harvey "Big Daddy" Pollitt [Burl Ives] for birthday celebrations. The pressure of family bonding drives Brick to reach for the bottle even more frequently. Harvey "Big Daddy" Pollitt and Ida "Big Mama" Pollitt [Judith Anderson] create an environment where Maggie "the Cat" Pollitt flourishes and Brick retreats. As the story progresses, secrets arise only to open doors Maggie "the Cat" Pollitt and Brick Pollitt had been trying to keep closed.

Throughout, the tension between the family dynamics is something not many films have been able to capture so believably. Brick Pollitt is first introduced drunkenly attempting to clear a series of track hurdles, vainly reliving the unfulfilled promise of his youthful athleticism. Imagining the cheers of a non-existent crowd, reality breaks the illusion in the form of a broken ankle. More debilitating than that, though, is the emotional damage from the accident; the injury is a final nail in the long-closed coffin of what used to be his sporting life and is a conclusive instigation for the tumultuous realization of what’s to come.

The film next picks up with Brick Pollitt still drinking and now either lying about in an inebriated stupor or hobbling along on a single crutch, his frailty and physical vulnerability an outward hint of the what lies dormant and damaged underneath. Brick Pollitt is joined by his wife, Maggie "the  Cat" Pollitt, as effervescent as he is subdued, the two having recently arrived at the grand Mississippi residence of his parents: Harvey "Big Daddy" Pollitt and, fittingly enough, Big Ida "Big Mama" Pollitt. Rounding out the family reunion are Brick’s brother, Cooper "Gooper" Pollitt [Jack Carson], his  wife, Mae Flynn "Sister Woman" Pollitt [Madeleine Sherwood], and their overbearing brood of misbehaving, insubordinate children or “no-neck monsters” as Maggie "the Cat" Pollitt calls them.

Standing out amongst the various acrid plotlines is the rocky relationship between Brick Pollitt and Maggie "the Cat" Pollitt, their own enclosed, intimate turmoil rising above the surrounding drama. Be it as Elizabeth Taylor seductively changes her stockings, slinks around in her brilliant white slip, or incessantly chatters away in a southern belle drawl, Elizabeth Taylor exudes as much vitality as the brooding Paul Newman restrains. Conversely, his booze-fuelled depression reveals a cruel streak marred by sexual strain and repressed desire: despite Maggie "the Cat" Pollitt’s best efforts, Brick Pollitt would rather fondle a glass of whisky than her.

Adding psychological insult to physical injury, Brick Pollitt is tormented by the suicide of close friend Skipper. Periodically sprinkled into their exchanges is the insinuation that there was something between Maggie "the Cat" Pollitt and Skipper,  as well as the implied notion that he and Brick Pollitt were themselves more than just good pals. Though the latent homosexual suggestion had to be watered down by Hollywood’s production code, the cues and allusions are plainly evident and the film may even gain some potency by the reflective repression of its own creation and what is subtly intimated makes the potential scandal all the more inflammatory.

Brick Pollitt’s wilfully silent stance of grim contemplation wavers when he raises his voice to Maggie "the Cat" Pollitt  and exposes a “crack in the stone wall,” but otherwise, their intense, if misplaced, passion challenges a loveless marriage apparently governed in part by never fully explained conditions for the arrangement. And what does she hope to gain by maintaining their relationship in spite of the obstacles, what is, as Brick Pollitt puts it, the “victory of cat on a hot tin roof?” “Just staying on it,” she says, expressing the self-imposed tension of a relationship on edge and a film that expertly builds toward a rising climax of stifling confrontation.

With Paul Newman and Elizabeth Taylor front and centre and an impossibly beautiful duo that look simply stunning in the hues of William H. Daniels Metrocolor Cinematography, ‘CAT ON A HOT TIN ROOF’ is very much an actor’s movie, with no less than two performances for the ages.

As a polished M-G-M production with a seething source and an appropriately biting screenplay by James Poe and Richard Brooks, helped ‘CAT ON A HOT TIN ROOF’ to be a box-office sensation, and Burl Ives and Madeleine Sherwood, who were reprising their  stage roles, were not recognized by the Academy. Arriving somewhat late in the so-called Classical Hollywood game, this is pinnacle 1950s American movie-making: subversive, provocative, powerful, and emblematic of a finely-tuned system still firing on all cylinders, even as it paves the way for a new model of national cinema.

It’s also amazing to consider that a film of such calibre almost didn’t get completed. Elizabeth Taylor’s then-husband, Mike Todd died in a plane crash during the first weeks of production. Elizabeth Taylor herself decided to not fly with Todd that day due an illness. Production was suspended for an indefinite period afterwards and threw the budget and schedule into a potential abyss. But Elizabeth Taylor, ever the professional, took only a small time to grieve and returned to the film quickly. Elizabeth Taylor’s poignant performance may have been even more heartfelt as the actress threw herself into the role.

The two defining features of ‘CAT ON A HOT TIN ROOF,’ the 1958 screen adaptation of Tennessee Williams’ Pulitzer Prize-winning 1955 play, are the extraordinary performances, principally from Paul Newman and Elizabeth Taylor, and the palpable sense of southern ambience. What makes the film an American classic, however, is that these two elements, each dependent upon and boosted by the other, are simultaneously heightened by exceptional writing, calculated direction, incisive set design, gorgeous cinematography, balanced editing, and all other superlative aspects of film production.

BOOM, BOOM AND IT MAKES ME CRAZY (uncredited) (Adapted by Marguerite Lamkin) [Sung by the children]

Blu-ray Image Quality – Warner Archive Collection presents us the film ‘CAT ON A HOT TIN ROOF’ with a 1.85:1 aspect ratio, and gives us a wonderful Metrocolor 1080p image and the Blu-ray also gives us superior resolution that excels at bringing the subtlest nuances and gorgeously saturated hues and contrast to vivid life. But due diligence in preservation along the way and current tinkering with all the digital tools at Warner Archive Collection disposal has resulted  unequivocally in a masterpiece renewed and proof positive that when it comes to preserving deep titles in hi-definition, the Warner Archive Collection really is, quite simply, in a class apart from the rest. Again, this is a totally reference image quality with some truly remarkable and, at times, absolutely stunning black levels. On top of all that, this film is nothing short of stunning. Seeing Paul Newman’s baby blue eyes in such detailed crisp colour is almost shocking. Every scene almost leaps from the screen with this gorgeous remastering. You can almost feel the heat as Maggie walks into the room. The film kept the grain consistently rendered for a very film-like presentation of this one-of-a-kind seminal fifties melodrama and, indeed, one of the greatest screen dramas of all time.

Blu-ray Audio Quality – Warner Archive Collection brings us the film ‘CAT ON A HOT TIN ROOF’ with just one standard 2.0 DTS-HD Master Audio Stereo experience and the audio has been given the necessary upgrade to make it sparkle as it should because the soundtrack is clean, and dialogue is very easy to understand, and the sultry, jazz-inflected score by Charles Wolcott “Song of the South” plays with good fidelity and broad dynamic range for the period, punctuating and modulating key moments of the drama, which makes for a very competent audio presentation. You are going to love – LOVE – this Blu-ray disc. It’s that simple.

Finally, ‘CAT ON A HOT TIN ROOF’ is technically a very glossy, seamlessly performed by its stars, and has the advantage of being adapted from one of Williams’s best plays. Richard Brooks always explained that he was first and foremost a writer. “Directing is only writing with a camera. Editing is writing. Scoring is writing. It all has to do with a story, how to tell a story.” Indeed, ‘CAT ON A HOT TIN ROOF’ is more a filmed play than an imaginative work of cinema. At times, the dialogue seems too explicit. Still, the film is sufficiently and eloquently true to the original, despite a concluding reconciliation scene between Brick and Big Daddy that contains more than a touch of the pedestrian and the sentimental. Still, in Richard Brooks’s adaptation, Tennessee Williams’s belief in the difficulties and the need for human connection in a loveless, hypocritical, emotionally impoverished world powerfully resonates.  This is a rare film adaptation of a major artist’s work that, even if flawed, doesn’t compromise the heart of his vision. Highly Recommended! 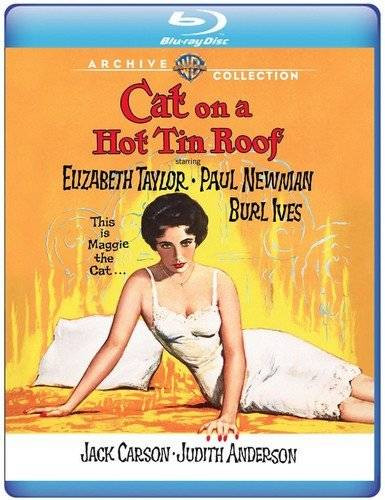 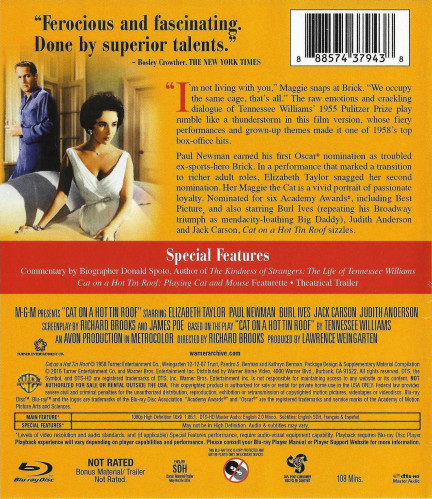