CENTRAL STATION [1998 / 2002] [DVD] [UK Release] The uplifting story of an unlikely friendship between an orphan and cynical woman who learn to help each other!

FILM FACT No.2: Being a co-production between Brazil and France, the film was chosen by the French Ministry of Culture to receive resources of Fonds Sud Cinema, for their funding. ‘CENTRAL STATION’ was first shown in a regional film festival in Switzerland on the 16th January, 1998 and on the 19th January, 1998 was shown at the Sundance Film Festival in the United States. On the 14th February, 1998, it was shown at the Berlin Film Festival.

Andrew’s DVD Review: ‘CENTRAL STATION’ [1998] is an emotionally well-earned poignant tale, with neorealism blended with a road-trip journey film through 1990’s Brazil rich landscapes affecting Brazilian drama by Award Winning directed Walter Salles and is one of the best films of 1998. Isadora "Dora" Teixeira [Fernanda Montenegro] is a cynical and selfish former schoolteacher who earns a living writing letters for the illiterate in Rio de Janeiro's busy railroad station. Viewing most of her clients as "trash," Isadora "Dora" Teixeira never even mails their missives. ‘CENTRAL STATION’ is a masterpiece where Walter Salles joins his great talent as a director perfectly to the excellent script and cast powerful.

Meanwhile, the supporting cast is also terrific: Otávio Augusto gives so beautiful little details to this truck driver Osmar Pedrão, Matheus Nachtergaele warmth is as palpable as Isaías Paiva, we instantly want to jump into the screen and tell him Josué Fontenele de Paiva is his brother and Caio Junqueira is also wonderful as the other brother Moisés Paiva. But ‘CENTRAL STATION’ has uniqueness to it: a chance to watch Fernanda Montenegro play against Moisés Paiva, another treasured Brazilian actress, and seeing them play together is just a huge pleasure.

When the end comes, it’s impossible to see Isadora "Dora" Teixeira’s final narration, when she asks Josué Fontenele de Paiva not to forget about her, without losing it completely. Last but certainly not least, the killer composed film score by Antonio Pinto is just totally beautiful and totally outstanding.

Catholic writer Henri J. M. Nouwen once wrote, "The joy that compassion brings is one of the best kept secrets of humanity." This extraordinary film publishes that secret, and we receive it with tears and glad tidings.

DVD Image Quality – MIRAMAX FILMS presents us the film ‘CENTRAL STATION’ with a very nice 1080i image and especially for the DVD format and is enhanced with a 2.35:1 (Anamorphic) aspect ratio. To some reviewers they comment that it can seem sometimes slightly heavy and dark with interior shot scenes, but I did not experience this at all, instead what I viewed was scenes that were viewed in natural light and totally fitting for these types of scenes in the film, obviously they must have a very inferior Blu-ray player. Cinematography Walter Carvalho pulls out all the stops and makes the colour image standout with total perfection. The contrast is punchy, and while the strong colours all round, especially with the mid-range colours is most attractively rendered. But overall the majority of the film the image quality is really excellent, especially seeing very good detail, especially with vivid colours in the daylight scenes, and we also get to view realistic skin tones and nice inky blacks. What is also very good about this DVD is that there are no noticeable problems with grain or artefacts and in fact the image is so good, you think you are viewing a good standard Blu-ray disc. So all in all, this definitely get a much deserved five star rating for a film released in 1998. Please Note: Playback PAL: This will not play on most Blu-ray and DVD players sold in North America, Central America, South America, Japan, North Korea, South Korea, Taiwan, Hong Kong and Southeast Asia. Learn more about the region specifications.

DVD Audio Quality – MIRAMAX FILMS brings us the film ‘CENTRAL STATION’ with just one standard 2.0 Dolby Digital Stereo Audio experience. It is also first-rate and very immersive, but at times the audio performance of the actors can be a little erotic with their comments, which is very natural for a film of this calibre and adult content. The dialogue in a few spots is sometimes nearly drowned out by some ambient sounds, especially with outdoors scenes, but inside buildings and rooms, the dialogue is spot on and you can hear all the actors speak very clearly. So all in all, this is a really good audio experience. Also outstanding is composers Antonio Pinto and Jaques Morelenbaum robust and dramatic composed Brazilian film music score that really adds ambience to the film that really helps you to enjoy this audio experience of this really excellent heart-warming and emotional film even more, so well done MIRAMAX FILMS for really giving the soundtrack a five star performance.

DVD Special Features and Extras: Sadly, MIRAMAX FILMS decided that they felt that any supplementary extras was not worthy for this particular DVD release.

Finally, ‘CENTRAL STATION’ is an outstanding Brazilian drama with a simple story. An old woman is earning by writing letters to the near and dears of illiterate people at a central station but never posts them. A working woman, one of her clients dies in an accident after dictating a letter to the father of her son living far from Rio De Janeiro and story turns. The old woman unknowingly involves herself to find the father of the kid who's stretched relationship turns into a strong bonding. Awesome performances by the characters and a great exposure of Brazilian culture. This is a true stuff never to be missed. I loved it. A heart-warming travel movie… Fernanda Montenegro… What a gem of an actress Fernanda Montenegro is... This movie will definitely stay deep in your  heart.. and the visuals are so well made... A simple tale of two people how are in unusual situation. A document about life and times of Brazil. It is a very heart-warming film and marvellous acting by the leading lady. Very Highly Recommended! 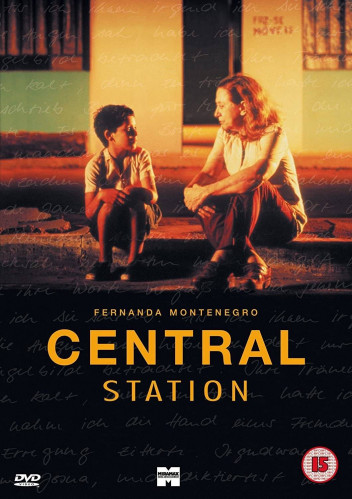 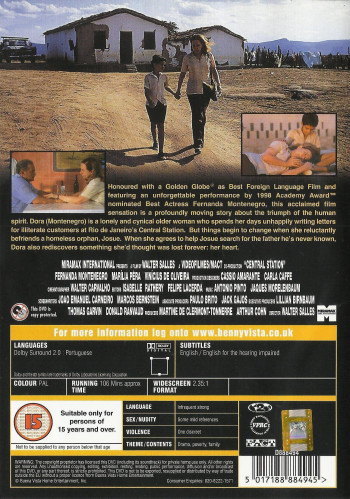