FILM FACT No.2: The film was adapted by William Boyd, Bryan Forbes and William Goldman from the books “My Autobiography” by Charlie Chaplin and “Chaplin: His Life and Art” by film critic David Robinson. Associate producer Diana Hawkins got a story credit. Although Sir Richard Attenborough wanted Robert Downey Jr. for the part of Charlie Chaplin, studio executives wanted Robin Williams or Billy Crystal for the role. Jim Carrey was also considered for the role.

Andrew's Blu-ray Review: Sir Richard Attenborough's biographical film ‘CHAPLIN' is of the life and times of Charlie Chaplin, is a very charming, creative and ultimately moving insight into what made Charlie Chaplin tick and shows you why he was a genius and loved by people all over the world. Robert Downey Jr. does a really excellent job at re-creating Charlie Chaplin's graceful slapstick and getting inside the silent-film superstar's head over many years of triumph, defeat, scandal, official persecution, exile, and inner peace.

The film is packed with stars in small roles, as everyone plays second banana to Charlie Chaplin, especially Marisa Tomei, Milla Jovovich, David Duchovney, Dan Akroyd, Moira Kelly, and Geraldine Chaplin, just to name a few. The period accuracy is well done, and the acting is superb and just shows more of Charlie Chaplin doing what he does best in making people laugh! But of course it all showed the negative side when you see James Woods as a prosecutor working hard to nail Charlie Chaplin for anti-American sentiments and making Charlie Chaplin pay $75.00 a week in a paternity case.

To his credit, Sir Richard Attenborough shows `CHAPLIN' as the social activist who had an FBI files, close to 2,000 pages in length. The drama, at times, seemed a bit much for someone known for bringing joy to so many... perhaps, therein lays the irony of Chaplin's life. Seeing this film makes you appreciate why Charlie Chaplin was a genius, especially seeing Robert Downey, Jr. in top form in this Oscar nominated performance and ode to one of cinema's greatest artists who was the forerunner for such &#34;control freaks&#34; as Warren Beatty and Orson Wells. Writer, director, actor, producer, editor... Charlie Chaplin did it all!

As expected from a Sir Richard Attenborough film, ‘CHAPLIN’ boasts strong production values. The editing and camerawork are smooth. There's a wonderful “life imitates art” scene where Charlie Chaplin is being chased by the police, and this couldn't have been better composed. The aging effects are some of the best I have ever seen. When Charlie Chaplin is old, he looks like he's being played by an elderly actor, not Robert Downey Jr. under a mountain of makeup. Veteran composer John Barry's score, while perhaps too reminiscent of his ‘Dances with Wolves’ music, is evocative. All-in-all, however, even though ‘CHAPLIN’ is fitfully entertaining, it fails to touch enough emotional chords to make it of more than passing interest.

THE HONEYSUCKLE AND THE BEE (Written by Albert Fitz and William H. Penn)

AMERICA THE BEAUTIFUL (Written by Katharine Lee Bates and Samuel A. Ward)

DON'T DILLY DALLY ON THE WAY (aka "My Old Man (Said Follow the Van)") (Written by Charles Collins and Fred W. Leigh)

ANY OLD IRON (Written by Charles Collins and E. A. Sheppard and Fred Terry)

SMOKE GETS IN YOUR EYES (Written by Otto A. Harbach and Jerome Kern)

Blu-ray Image Quality – The Blu-ray appears to be derived from the same transfer used for the LIONSGATE 2008 inferior DVD. The greater 1080p resolution afforded by Blu-ray is something of a revelation and of course is enhanced with a 1.78:1 aspect ratio. In the earlier scenes in England, detail is noticeably improved and colour delineation is superior. You can make out individual faces in images such as the music hall and vaudeville audiences, as well as different articles of clothing in medium shots. But overall the picture remains soft and sometimes almost mushy, and one begins to worry that perhaps the transfer was flawed in a way that DVD's resolution concealed. When Charlie Chaplin steps off the train at Mack Sennett's studio, and snap, the entire photographic style changes. Without calling too much attention to themselves and without, in other words, looking like a Tony Scott or Michael Bay film, the images become crisp and finely detailed, and the colours become subtly brighter and less faded. Charlie Chaplin may not know it yet, but he's just taken the step that will change his life, and Sven Nykvist's cinematography registers the transformation. Until now, the film hasn't been available in a home video format capable of fully presenting this transition, which registers unconsciously, unless you're looking for it. Black levels are excellent, and check out those tuxedos, and the film's grain structure appears to be intact and unreduced. Having been completed in an era before digital intermediates were standard practice, the film has been transferred from an analogue source, and close attention reveals the occasional “pulsing” instability caused by gate weave. However, this is minor and will probably not be noticed by most viewers.

Blu-ray Audio Quality – When I viewed my previous DVD, I was impressed with the improvements caused by matrix-encoding the 2.0 Dolby Digital track. At the time, I didn't think CHAPLIN's soundtrack could be improved short of a discrete remix from original elements. I stand corrected. The 2.0 DTS-HD Master Audio track on this Blu-ray gives John Barry's haunting score an increased presence and musicality that adds to the film's emotional weight. However, I recommend playing the track through front left and right speakers only, the track tended to “bleed” into the surrounds more than I found desirable. As always with such matters, individual tastes and listening spaces will vary. Dialogue remains clear, as has generally been the case with ‘CHAPLIN.’ Surround effects are not a significant factor with this film.

Blu-ray Special Features and Extras: The only real Negative aspect of this excellent Blu-ray is that the extras are shown in the most ridiculous aspect, as you get this small image at the top left hand part of my flat widescreen Television and I don't know what idiot who produced this ludicrous nonsense and thought it was at all very clever, but to me it is totally ridiculous and I cannot understand why other people’s Reviews have NOT pointed out this ridiculous situation, as I feel these special features have spoiled what is otherwise a really excellent ‘CHAPLIN' film and again I don't know how LIONSGATE thought these special features were a professional job, in fact it was a very unprofessional crass action.

Special Feature: Includes 3 documentaries plus a rare home movie of Charlie Chaplin, which are as follows:

“All at Sea” Here we get to view a home movie of Charlie Chaplin vacationing in Catalina, California. Here we get to view some rare home movie footage from 1933, shot by Alistair Cooke, then a college student, on Chaplin's boat. It shows Chaplin in private moments, although it also shows how little he could resist the impulse to perform whenever a camera was on. The original footage is in the 1.37:1 aspect ratio, but it has been pillar boxed for presentation in a 1.78:1 frame. [2:27]

“Strolling into the Sunset” with this  documentary Director Sir Richard Attenborough he interviews Chaplin's son Michael, film critic Richard Schickel and Chaplin biographer David Robinson, whose book supplied raw material for the film, about the film's genesis and the breakthrough that Downey's casting represented. Sir Richard Attenborough is candid about what he thinks he didn't get right and says he'd like to make the film all over again. [7: 30]

“Chaplin the Hero” with this documentary we get some Charlie Chaplin's contributions to film. A reminiscence of a great career, with a mixture of vintage clips and 'CHAPLIN' footage alongside numerous interview snippets. [6:00]

“The Most Famous Man in the World” with this documentary, we take a look at Charlie Chaplin's status as a pop icon, and is a continuation of sorts of the above feature, again reminiscing about Charlie Chaplin. I don't see why this needed to be a separate feature. [5:00]

Finally, 'CHAPLIN' is not quite a perfect film, nor is it among the top biopics ever made. It is, however, the home of one of the best biopic acting performances out there. Robert Downey Jr. is a fantastic Charlie Chaplin, and watching him recreate the classic, most memorable scenes. Despite slight negative aspects of this Blu-ray, it is still an excellent film and another aspect that is wrong about this Blu-ray disc is that Amazon on both sides of the Atlantic, says that it is just one Region A/1, well I can tell you that this information is totally wrong, as it is as stated on the Back Cover that it is All Regions. Highly Recommended! 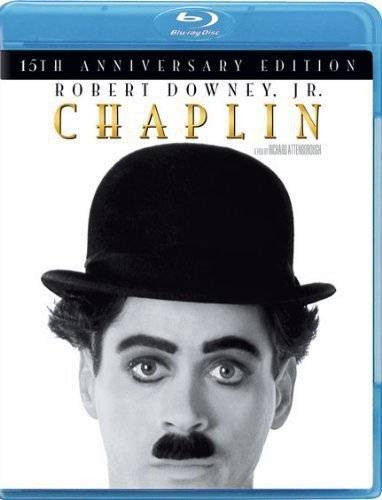 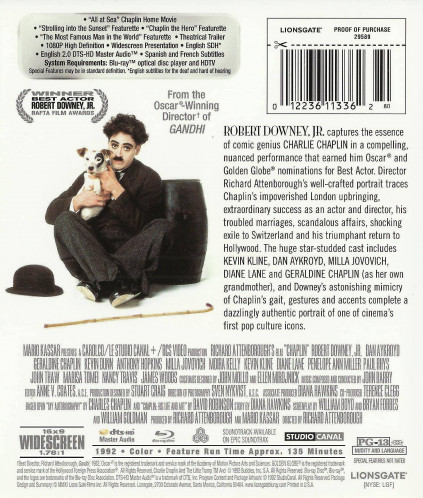