CHILDREN OF THE DAMNED [1964 / 2021] [Warner Archive Collection] [Blu-ray] [USA Release] Beware The Eyes That Paralyze! They Come To Conquer The World, So Young, So Innocent and So Utterly Deadly!

Six gifted children are found to pose a threat to the world in this chilling horror story from the makers of ‘Village of the Damned.’

The children, who all live in England but are from different parts of the world, are normal in all respects except that they are geniuses with acute psychic powers. They have more in common than their IQ’s, however: None of them have fathers, and no one seems to know where they came from. When a psychologist (Ian Hendry of TV’s “The Avengers”) attempts to find out more, he unlocks a mystery that could lead to the destruction of the universe.

FILM FACT: ‘CHILDREN OF THE DAMNED’ is a 1964 British black-and-white science fiction horror film, a thematic sequel to 1960's ‘Village of the Damned,’ which concerns a group of children with similar psi-powers to those in the earlier film. The film enables an interpretation of the children as being a good and more pure form of human being, rather than evil and alien.

Andrew’s Blu-ray Review: ‘CHILDREN OF THE DAMNED’ [1964] finds five super-intelligent, emotionless children have the power to control people’s minds. They’re all taken to London to be studied but they escape and barricade themselves in an old, abandoned church. One would assume that this film is a sequel to the 1960 ‘Village of the Damned,’ but on closer inspection, this film really isn’t a part of that film, because ‘Village of the Damned’ deals with women having extra-terrestrial children artificially implanted into their wombs.

While the film ‘CHILDREN OF THE DAMNED’ have the children born with a mutation that causes them to be years ahead of ordinary humans in intellect, they look slightly different from the children featuring in the former film. Two separate veins on the same basic genre certainly but there is no continuity between the two narratives, this preconception is what has damaged the film’s popularity.

Not considered as much of a classic, paling in comparison to ‘Village of the Damned’ in the eyes of many, the film falls under the misguided and proverbial “difficult second film.” If we must report why the film doesn’t shine as brightly as its counterpart the sci-fi film just isn’t creepy and chilling enough, plus the narrative can be a little too cloudy and vague about how the children came to be and what ultimately motivates them to control and terrorize the population.

Judging the film on its own merits forgetting the first; ‘CHILDREN OF THE DAMNED’ is a very classy superb black-and-white horror 1960’s picture; capturing the early Sci-Fi paranoia regarding the threat of clandestine invasion in some undefined form. Of course, it includes elements that are fuelled by the political unrest rife in society during the cold war period of the era, much like ‘Village of the Damned’ in that respect.

With the brilliant screenwriter John Briley, who later on went onto winning an Oscar for his 1982 ‘Gandhi’ screenplay, is enduringly intelligent and the composed film score was created by the supremely talented Ron Goodwin, brilliantly did the film scores for the iconic films ‘Where Eagles Dare’ and the ‘Battle of Britain.’

All the performances from the adults and children are solid, brilliantly well-acted is the relationship between the characters Ian Hendry and Alan Badel portray, an interesting and thought-provoking foray. The film was made just before homosexuality was legalized in Britain; it is never clarified whether the two men are flatmates or partners, either way it brings home the notion that, their status might not really matter in today’s modern outlook on their sexuality.

‘Village of the Damned’ and ‘CHILDREN OF THE DAMNED’ may not come from the brand of horror that delivers enormous shocks and runs at a break-neck pace, but both films are thoroughly fascinating to watch. From the trademark mid-century sci-fi plot to the glowing eyes to the believably orchestrated performances especially from the spooky children, and both films are not one to miss.

While ‘CHILDREN OF THE DAMNED’ sequel will never have the same sort of cult following the original has gained, it is not bad in its own right. What it does is create a story that spans nations, making a not so subtle argument about the advantages of working together rather than being at odds with one another. Coming out in 1964, this was no doubt a jab at the Cold War scenario.

Blu-ray Image Quality – Warner Archive Collection presents the film ‘CHILDREN OF THE DAMNED’ with a 1.85:1 theatrical aspect ratio is faithfully reproduced with this superb 1080p black-and-white image transfer and arrives on this Blu-ray disc for the first time with a brand new master. I have said this before; there is no studio like Warner Bros., for their superb catalogue title releases on the Blu-ray format and this film is no exception, the picture here is totally brilliant, detail is sharp and well defined throughout and the black and white presentation has a nice balance to it. From what I could see, there was no obvious or significant film damage like specs, dust marks or other flaws so another well done transfer from Warner Archive Collection and definitely gets a five star rating for me.

Blu-ray Audio Quality – Warner Archive Collection brings us the film ‘CHILDREN OF THE DAMNED’ with a standard 2.0 DTS-HD Master Audio experience, which is a sound mix that is very solid and for the most part it is wonderful audio mix, and especially the dialogue comes across with good clarity and the same goes for its original composed film score by the prolific and brilliant British composer Ron Goodwin. Overall, this is one of the better and very impressive audio experiences for a nearly 60 year old ‘CHILDREN OF THE DAMMNED’ film.

Audio Commentary by Screenwriter John Briley: With the start of the M-G-M logo and Leo the Lion, we are then introduced by John Briley and informs us that he wrote the original screenplay for the film ‘CHILDREN OF THE DAMMNED’ and was recorded in 2004 and is nice to hear again; not only because it offers a first-hard account of the film's construction, but it's more meaningful due to John Briley's sad death only two years ago. Topics of interest include developing the story, the earlier ‘Village of the Damned’ film and its source novel by John Wyndham's “The Midwich Cuckoos,” also the notorious Hollywood's blacklist, and much more. Obviously it leans much more heavily on the in-depth themes of the film and the story elements than traditional behind-the-scenes fare like casting of the actors and technical details, but within those boundaries this audio commentary is definitely worth listening to.

Finally, director Anton M. Leader's ‘CHILDREN OF THE DAMMNED’ is a reasonably entertaining follow-up, rather than a sequel, to the brilliant 1960’s classic ‘Village of the Damned.’ It explains its core idea, of powerful children, as being something “other” than the product of alien insemination. These different children – six in all – are born to mothers around the globe, without the need for conventional procreation. Officials such as Dr. Tom Llewellyn [Ian Hendry] and Dr. David Neville [Alan Badel] bring the children together for study, only for the kids to break free and hole up inside an abandoned building. They bring along a concerned adult Susan Eliot [Barbara Ferris], and are able to build something quite remarkable. Soon, it is determined that these children may pose a serious threat to mankind, due to their superior intellect. Once you get over the fact that this is a different variety of sci-fi, with fewer scenario horror elements, from the film ‘Village of the Damned,’ this does start to look better. If you compare them too much, this is naturally going to come as a let-down to some folk. It's still somewhat sad and scary, just in a different sort of way. The acting is solid from the adults – also including Alfred Burke, Sheila Allen, Patrick Wymark, Harold Goldblatt, and Bessie Love and just right by the blank-faced children. Clive Powell and the other alien children do a capable job of barely showing any emotion, right up until the end. The film is a much slowly paced, and very low key, but it does have its rewards for patient viewers. Now with the previous Blu-ray release ‘Village of the Damned’ and now the Blu-ray release of the film ‘CHILDREN OF THE DAMNED’ is a brilliant double bill for your collection and is certainly worth your time if you are a true sci-fi horror fan, but make sure you erase ‘Village of the Damned’ from your memory just for the duration of the film ‘CHILDREN OF THE DAMNED.’ Highly Recommended! 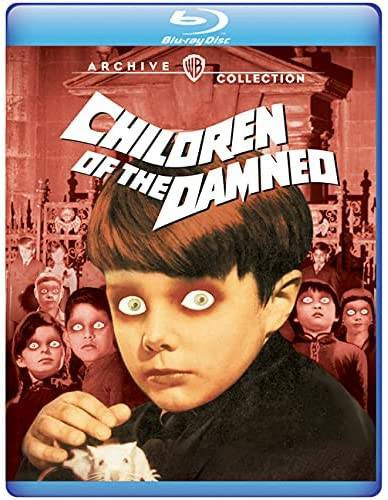 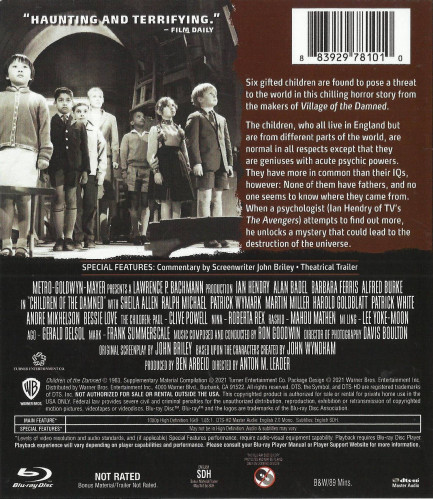