Journalist Miss Elizabeth Lane [Barbara Stanwyck] is one of the country's most famous food writer. In her columns, she describes herself as a hard working farm woman, taking care of her children and being an excellent cook. But this is all lies. In reality she is an unmarried New Yorker who can't even boil an egg. The recipes come from her good friend Felix  Bassenak [S.Z. Sakall]. The owner of the magazine she works for has decided that a heroic sailor will spend his Christmas on “her” farm. Miss Elizabeth Lane knows that her career is over if the truth comes out, but what can she do?

Andrew's Blu-ray Review: ‘CHRISTMAS IN CONNECTICUT’ [1945] and stars Barbara Stanwyck who usually burned up the screen in films like ‘Double Indemnity’ and has been listed number 8 on the American Film Institute's list of greatest screen villains, but with this film would once again prove her amazing versatility in Warner Bros. frothy confection ‘CHRISTMAS IN CONNECTICUT,’ which would also provide perennial screen-heavy Sydney Greenstreet a chance to show his "lighter side" acting skills.

In the film ‘CHRISTMAS IN CONNECTICUT’ Jefferson Jones [Dennis Morgan] is a naval officer whose destroyer goes down in the Pacific. After eighteen days on a life raft with no food, Jefferson Jones is rescued and brought back to the states to recuperate in a hospital, where he is kept on a steady diet of mush to allow his system to readjust to food. While convalescing, Jefferson Jones dreams of nothing more than a sumptuous meal of the kind described in glowing detail by Elizabeth Lane [Barbara Stanwyck] in her column in the glossy Smart Housekeeping magazine. Along with menus, Elizabeth Lane offers heart-warming, poetic glimpses into her life as a Connecticut farm wife, offering tips on housekeeping and gardening.

Jefferson Jones is love-struck nurse pens a letter to the publisher of Smart Housekeeping, Alexander Yardley [Sydney Greenstreet], asking to arrange for Jefferson Jones to spend Christmas with Elizabeth Lane and her family on their Connecticut farm, so that Jefferson Jones can get an idea of what happy domestic life would be like. Alexander Yardley seizes on the idea as a patriotic gesture and a great way to boost circulation. What he doesn't know is that Elizabeth Lane's home life is a complete fiction created by the journalist and her editor Dudley Beecham [Robert Shayne], and the mouth-watering menus are provided by their long-time friend, restaurateur Felix Bassenak [S.Z. Sakall]. Although Elizabeth Lane tries to talk him out of it, the overpowering Alexander Yardley not only convinces her that it's her duty to open her home to the wounded serviceman for the holiday, but invites himself along as well.

Certain that Elizabeth Lane will lose her job when Alexander Yardley learns the truth, Elizabeth Lane resigns herself to giving in to the latest marriage proposal from her loquacious suitor John Sloan [Reginald Gardiner], but when Elizabeth Lane and Dudley Beecham remember that Sloan has a Connecticut farm, they hatch a plan to save their jobs by having Elizabeth Lane quickly marry John Sloan and pretend that they've always been together. Unfortunately for John Sloan, the quickie ceremony is interrupted by the early arrival of Jones for his visit, and they must pretend to be married while Lane attempts to play the role of a domestic expert. Elizabeth Lane's simple plan for duping the young officer and her publisher becomes hopelessly complicated when she finds herself falling for Jefferson Jones, but will Elizabeth Lane’s dream be fulfilled and we get a really fairy tale ending, well you will have to purchase this brilliant Blu-ray disc to final outcome.

I really adore this holiday festive film. I love it for it’s hilarious set-up type film. Festive holiday films in general tend to be sappy, mushy, sweet, all rolled up in one package, and although there is certainly nothing wrong with those mentioned adjectives, especially for festive holiday films, it is so nice to get a little change into your festive holiday line-up once in a while, which makes the film ‘CHRISTMAS IN CONNECTICUT’ totally perfect, for me personally and I know you will feel the same when you view this festive holiday film

This is also a really underrated film, one that perhaps slips under many people's radar, so I strongly encourage you to give it a view around the festive holiday season. It has a bit of a slow start, but eventually you are in for a treat and you are also very well rewarded with the final outcome. The main cast and the supporting actors are totally excellent, the dialogue is very witty and crackles with romantic intrigue, and overall it is a very satisfying, feel good comedy festive holiday film and a lovely combination of screwball meets romance meets holiday festive film. This is a totally refreshing holiday festive film because it really stands out from similar holiday festive films that are so common around this festive holiday time at the end of every year. It might not actually be the most "Christmassy" film, but I still strongly suggest you give it a watch. You won't regret it; this isn't one to skip. So the bottom line is purchase this Blu-ray disc and watch it, especially in the Christmas time of the year!

THE WISH THAT I WISH TONIGHT (Music by M.K. Jerome and Lyrics by Jack Scholl) [Sung by Dennis Morgan and played often in the score] (uncredited)

SHE BROKE MY HEART IN THREE PLACES (uncredited) (Written by Al Hoffman, Jerry Livingston and Milton Drake) [Played when the nurse is reading the magazine to Jeff]

TURKEY IN THE STRAW (uncredited) (Traditional) [Played at the community dance]

THE IRISH WASHERWOMAN (uncredited) (Traditional) [Played at the community dance]

Blu-ray Image Quality – Warner Home Video once again brings you this classic festive film in a glorious 1080p black-and-white image presentation and enhances it with a nice 1.37:1 aspect ratio. The 1080p image resolution has a massive improvement in the predictable areas, like the superior contrast, there is also a very nice film texture and it definitely gives you an easily advances over the inferior DVD release. Contrast is strong, and has excellent grey scale variance that really nicely highlights background elements and gives the picture image a bit of depth. Black levels are rich and inky; and the white of the snow remains bright and very realistic. Close-ups are good, and definitely gives you a significant amount of fine detail, and Barbara Stanwyck's striped jumper is always rock solid and resists giving you any shimmering effects. The source material still exhibits a very solid effort that will certainly please any film fans who love this film and definitely merits an upgrade over the very inferior DVD release.

Blu-ray Audio Quality – Warner Home Video sadly is only able to supply one audio soundtrack of 1.0 DTS-HD Master Audio and gives you great fine sounds throughout the film, with the occasional seasonal composed music score by Friedrich Hollaender that gives the festive film a really nice seasonal feel to its overall performance. At the start of the film you get a wide dynamic scale handles all the highs and lows with ease, and a couple of booming sound moments when the torpedo striking the ship in the opening minutes of the film and even the avalanche of snow cascading off the barn roof later on sounding good and definitely will shake the room without any distortion. Dialogue is always clear and comprehendible, but I have read American reviewers say when the actor S.Z. Sakall speaks they cannot understand what he is saying, well that is why I am glad I am European, as I could understand everything he says. But one of the more standout moments for me is when actor Dennis Morgan sings with his dulcet crooning voice that really exudes plenty of warmth and charm towards the Christmas spirit. For a 70-year-old film, I feel ‘CHRISTMAS IN CONNECTICUT’ sounds really good for its age, which of course is really excellent news indeed and well worth upgrading by purchasing this Warner Home Video Blu-ray disc.

Special Feature: Vintage 1946 Academy Award® Winning Short: ‘STAR IN THE NIGHT’ [1945] [480i] [1.37:1] [21:27] This is a modern version of the Christmas story and adds elements of Charles Dickens "A Christmas Carol" story. On Christmas Eve somewhere in the US southwest, three cowboys are riding through the desert night with items they purchased at a general store. They see a bright light just above the horizon and decide to find out where the light is coming from. The light turns out to be a newly installed light, in the shape of a large star, at the Star Auto Court and auto court's owner, Nick Catapoli [J. Carrol Naish], doesn't believe there is much good left in the world. He complains that people wish each other “Merry Christmas,” then look out only for themselves the rest of the year and his customers get the brunt of his rudeness, but have no other choice of lodging nearby. A young couple, José Santos [Anthony Caruso] and Maria Santos [Lynn Baggett], arrives hoping to get lodging. There are no cabins available, so they must settle for a small shed to sleep in. When the lodgers find out about Maria Santos's medical condition and Nick Catapoli learns that there is still goodness in the world. Cast: J. Carrol Naish, Donald Woods, Rosina Galli, Richard Erdman, Lynn Baggett, Johnny Miles, Anthony Caruso, Irving Bacon (uncredited), Claire Du Brey (uncredited), Dick Elliott Cactus Mack (uncredited), (uncredited) and Virginia Sale (uncredited). Director: Don Siegel. Producer: Gordon Hollingshead. Screenplay: Don Siegel (uncredited), Robert Finch (story) and Saul Elkins (screenplay). Composer: William Lava. Cinematography: L. Robert Burks. ‘Star in the Night’ won an Academy Award® in 1946 for Best Short Subject (Two-Reel).

Theatrical Trailer [1945] [1080i] [1.37:1] [1:53] This is the Original Theatrical Trailer for the film ‘CHRISTMAS IN CONNECTICUT.’ It is really a nice festive trailer that really entices you to enjoy the actual Christmas festive film, because it is a great presentation.

Finally, ‘CHRISTMAS IN CONNECTICUT’ is rather like a sweet-potato casserole with melted marshmallows and a real treat that is so curious it defies explanation, and yet so irresistible that no Christmas season would be complete without it. The film's success lies squarely on Barbara Stanwyck's broad shoulders, who is so consummately versatile professional actress, who is well placed at home in ultra-light comedy films as well as hard-bitten drama films that this actress is famous for. Here Barbara Stanwyck shows her infallible ability to tailor her talent to the material. As Miss Elisabeth Lane, Barbara Stanwyck never appears to be working too hard to make the role overly funny, but instead breezes through the film like a breath of fresh air. In the first half of the film, while trying to hide her ignorance of domestic life, Barbara Stanwyck perfectly balances her attempts to appear at ease with the fact that Lane is walking a mine field in which any common domestic task may expose her duplicity. Dennis Morgan proves a charming leading man in a role that is not overly demanding but could have easily been overdone, and Sydney Greenstreet is a total pleasure in one of his rare good-guy roles and it is a particular pleasure to see him re-teamed with co-star S.Z. Sakall in the film ‘Casablanca.’ 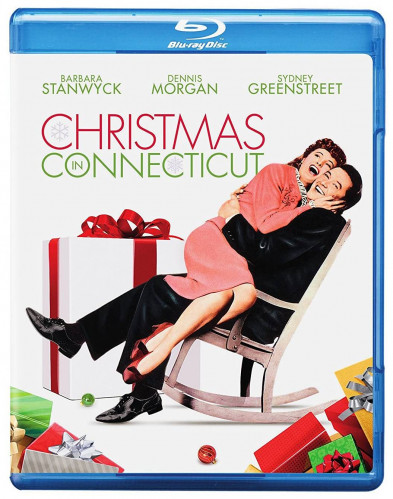 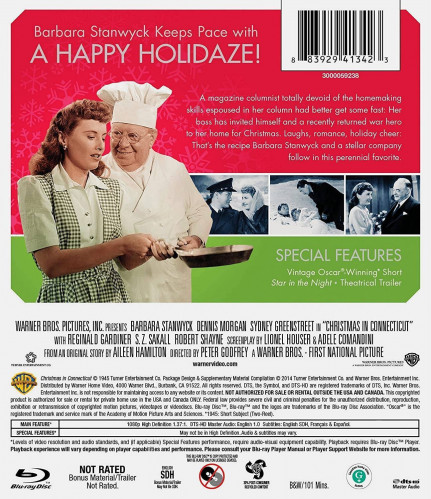