Ladies and Gentlemen. . . Get ready for non-stop hire wire action with John Wayne riding and brawling his way across Europe as the two-fisted boss of a three-ring Wild West show.

Co-starring the vivacious Claudio Cardinale and the beautiful Rita Hayworth, this Hollywood extravaganza is packed with thrilling stunts and action-filled fun. You’ll see a devastating shipwreck, an explosive fire that fills the screen with danger, teams of horse-back-riders, wild animals on a rampage, and Europe’s top circus performers.

Don’t miss the incredible stunts, unbelievable spectacle, a cast of thousands and old-fashioned romance that makes Bronston’s ‘CIRCUS WORLD’ a movie to remember!

FILM FACT No.2: While filming a scene where the main tent catches fire, John Wayne was almost killed when the set collapsed. As he was "fighting" the fire, John Wayne was to be cued in by the assistant director when to leave before the set was to collapse in flames. Either John Wayne didn't hear the cue, or the a.d. mistimed it (it was never determined which), but the flaming set began to collapse before John Wayne got out. He escaped with just a few seconds to spare before the entire set would have fallen down on top of him. While the film is taking place in 1901, there are several mistakes with the European flags. One example is the Finnish flag that is seen in the movie. Finland didn't achieved independence and the flag until 1918. The film's music score was by Dimitri Tiomkin and the cinematography by Jack Hildyard. The film was made in Super Technirama 70, but was advertised on posters as being presented in Cinerama in those theatres showing that process. It has been speculated by film historians that at the time this film was made, Rita Hayworth may have been suffering from early onset Alzheimer's disease. Only 46 at the time the film was made, she was often late on set and had trouble remembering her lines, and it was reported she was often drunk and abusive on the set. John Wayne had previously looked forward to working with her, but allegedly came to despise what he saw as unprofessional behaviour.

Andrew’s Blu-ray Review: ‘CIRCUS WORLD’ [1964] that originally was released as ‘The Magnificent Showman’ in the United Kingdom in 1964, but now with this UK Release, has now been given its original title. This big, sprawling film, beautifully filmed in Cinerama, that is set in the early years of the 20th century, Matt Masters [John Wayne], who is also the foster father of Claudia Cardinale her mother (an aerialist) having left both of them years before. , Matt Masters is an American circus impresario in the early 1900's, decides to take his circus and Wild West Show to Europe, with the ulterior motive of finding Lili Alfredo [Rita Hayworth], mother of Toni Alfredo [Claudia Cardinale], the young circus performer whom Matt Masters has protected since Lili Alfredo's disappearance 14 years earlier.

Lili Alfredo had been married to an aerialist though in love with Matt Masters; and when her husband, “The Flying Alfredo” who fell to his death, which at the time it was believed that Aldo Alfredo [Richard Conte] dove to his death deliberately when he realised his wife loved Matt Masters and not him. The troupe puts on a show aboard the circus boat in Barcelona; when a performer falls overboard, the huge audience surges to the railing, causing the ship to capsize. No lives are lost, but the circus is destroyed. Matt Masters, Toni Alfredo, and Steve McCabe [John Smith], Toni Alfredo's boyfriend, join a touring Wild West Show and are a great success. Matt Masters plans to put together another show and rehearse it in Spain during the winter before touring.

A fire breaks out, and Toni Alfredo and Lili Alfredo, scaling a rope to the top of the tent, save the major part of the big top from burning. When the fire is extinguished, Toni Alfredo and Lili Alfredo embrace and all is forgiven and decides to stay with the circus; and at the opening of the circus the next night, the two perform an aerial act with Rita Hayworth and Claudia Cardinale astounding the crowd by doing over one hundred over-the-shoulder one-arm somersaults. But as to the outcome of the film and finale, well you will have to view this Blu-ray to find out.

TURKEY IN THE STRAW (uncredited) (Traditional) (Arranged by Dimitri Tiomkin)

THE DYING COWBOY (Oh, Bury Me Not on the Lone Prairie) (uncredited) (Traditional) (Arranged by Dimitri Tiomkin)

A HOT TIME IN THE OLD TOWN (uncredited) (Music by Theodore A. Metz) (Arranged by Dimitri Tiomkin)

Blu-ray Image Quality – ‘CIRCUS WORLD’ has received a really wonderful restoration, with its stunning sparkling 1080p encoded image and also offering a beautiful transfer with an equally stunning 2.20:1 [Super Technirama-70] aspect ratio and seems to have undergone a meticulous frame-by-frame clean-up, culled from the original 35mm horizontal 8 perf Technirama negative with a total professional job. The source is just about impeccable, with no traces of dirt or blemishes. Blacks are pure, and contrast is vibrant and retains a definite filmic look quality. The originally, already-brilliant Technicolor palette is superior and in some cases, greatly improved over the previous inferior DVD version. Detail and sharpness also receive a noticeable boost. The image is three-dimensional, with appreciable depth and excellent clarity even in the most detailed shots. It's also no surprise that this is a rock-solid encoded image, with no apparent edge enhancement or motion artefacts. ‘CIRCUS WORLD’ was restored and re-mastered to HD [1080p] quality from the original 35mm horizontal 8 perf Technirama negative by Pinewood Post Production in the United Kingdom. Playback Region B/2: This will not play on most Blu-ray players sold in North America, Central America, South America, Japan, North Korea, South Korea, Taiwan, Hong Kong and Southeast Asia. Learn more about Blu-ray region specifications.

Blu-ray Audio Quality – Anchor Bay Entertainment has brought you ‘CIRCUS WORLD’ that has gone above and beyond with the audio quality experience with this film. What you are given is two audio tracks, which includes a 5.1 DTS-HD Master Audio and 2.0 LPCM Stereo Audio, which you have to select in the menu, as it automatically goes to the 2.0 LPCM Stereo Audio. With the 5.1 mix it is a full bodied soundstage experience. Minor ambiance is also nicely sustained, particularly during the outdoor action, but the rear speakers come into play more prominently when you have the full orchestra go into overdrive to great effect. The music score is also technically impeccable, with a nice richness I wasn't expecting for an older title like this. So all in all a very nice audio experience, that especially helps you to enjoy the circus environment you view on the screen.

Blu-ray Special Feature and Extras: Sadly there are no extras with this Blu-ray release. But what you do get is the original film release INTERMISSION and with it you get the Best Song in a Motion Picture of Dimitri Tiomkin (music) and Best Song “Circus World” for Ned Washington (lyrics) in the background. Also sadly all you get is a blank screen, but what a shame they could not of supplied a still image of the film title. But what is a slight let down, is the audio has a horrible crackling throughout the intermission, so if they can do a restoration on the image quality, why couldn’t they have done an upgrade on the audio presentation.

Finally, here is a real show stopper! Which all can view now with this brilliant Blu-ray release. ‘CIRCUS WORLD’ is at its best with all the personal drama and spectacle and calamity that can befall a troupe of performers. It's a great film! It is also another outlet venue for the Duke to excel in. I've been searching for this film for a very long time, but now I have been rewarded and definitely belongs in your Blu-ray Collection, like mine now, especially with all the Duke's other great films that have now been released in the Blu-ray format. Henry Hathaway at least makes the film look gorgeous, filmed in something called Super Technirama-70, but promoted as Cinerama. ‘CIRCUS WORLD’ is visually rich, with beautiful saturated colours, with an admirable level of kinetic energy sweeping across the screen, particularly in the numerous circus show segments. Henry Hathaway finally finds a pulse in the late catastrophic fire scene that injects some much needed momentum into the ‘CIRCUS WORLD’ film. Highly Recommended! 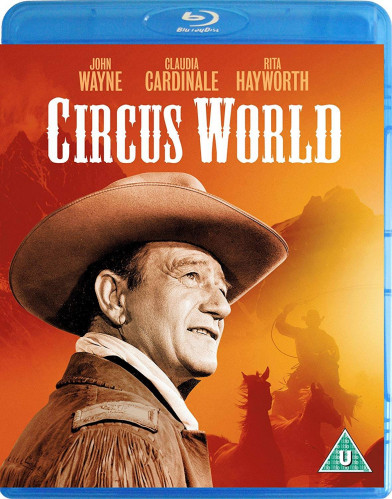 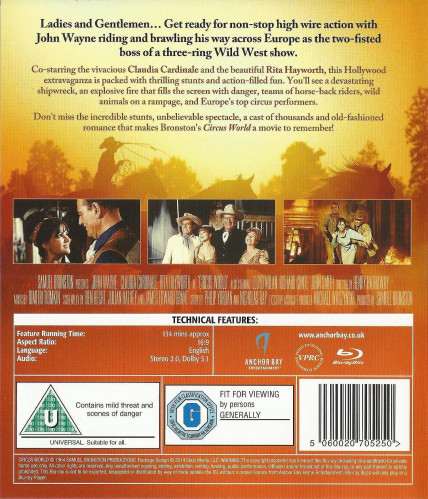