Visionary filmmakers James Cameron [‘AVATAR’] and Andrew Adamson [‘SHREK’] invite you on a spectacular adventure unlike anything you've seen before. Leap, soar, swim and dance with the legendary performers of Cirque du Soleil as they transport a young couple on a “magical journey” worlds away and beyond imagination.

A greatest-hits extravaganza tenuously linked by a love-story narrative and the 3D film relies on directors Andrew Adamson and James Cameron's use of slow-motion, close-ups and inventive camera angles to smooth the transition from big top to big screen presentation on this spectacular 3D Blu-ray disc.

The undeniably spectacular skills of the Cirque du Soleil performers lose little in translation, although the intimate moments work decidedly better, as cinema-goers catch each slap of the aerialist’s mid-air hand grasps and every droplet of water splashed. The elastic female gymnast doing solo backflips inside an oversized brandy glass was a totally boring pointless viewing experience in my personal opinion and should have been taken out of the whole show.

With more than 100 million tickets sold across six continents for Cirque du Soleil stage shows, the brand is certainly a spectacular experience for all ages. The new medium of this 3D Blu-ray disc opens up the experience to an even wider audience, in exploring this awesome experimental artistic stunning film, to savour time after time with this beautiful 3D Blu-ray disc.

The story opens with something that would never happen at a live Cirque du Soleil performance, a fall from The Aerialist [Igor Zaripov]. Mia [Erica Linz], a petite outsider visiting a down-at-heel old-timey circus, the kind with sword-swallowers and bearded ladies, is drawn to one of the performers. He's a trapeze artist simply known as The Aerialist [Igor Zaripov] and when she catches his eye mid-air, he breaks concentration and plunges to the ground.

The sand of the rink gives way and she follows him down the rabbit hole, as it were, into a parallel universe where she meets that madly prancing clown [John Clarke]. He escorts her through a series of fantastical realms populated by trampolining superheroes, rider less tricycles and giant double-jointed spiders from the company's Las Vegas shows, including O, Mystére, Believe and Viva.

As Mia [Erica Linz] wanders through these dreamscapes clutching a poster of The Aerialist [Igor Zaripov] to her chest, Mia [Erica Linz] alternates eye-widening with theatrical brow-furrowing. Let's just say that as an actress, she's a good acrobat, which is made clear in the gorgeously romantic finale. The brow-furrowing is understandable, though, as, like most abstractedly mystical Cirque du Soleil stage shows, the action follows the logic of a dream.

Still, the unifying accomplishment is in the giddy acrobatics, sleek sensuality and heart-stopping derring-do of the performers, as well as the constantly sumptuous, transporting immersive cinematography, and the final result is some of the coolest cinema performance footage ever recorded in 3D. Some acts are physically astounding and technically well staged; especially the aerial pas de deux finale is especially very good and totally spectacular.

Most Cirque du Soleil shows do have a story line, usually a young person on a quest, and “Worlds Away” does that extremely well. Acted without dialogue, the plot concerns a gamine acrobat [Erica Linz] who attends a shabby, real-world carnival and is so entranced by a handsome The Aerialist [Igor Zaripov] that she's compelled to follow him, Alice-like, down a hole and into another universe. There, a bordering-on-creepy clown escorts her through show-stopping numbers from Cirque du Soleil's Vegas shows. The opening set from “O” features swimmers, acrobats, and contortionists in, on, and above water. A segment from “Kà” boasts Imperial China-influenced visuals, costumes, and makeup with acrobats performing gravity-defying stunts on a near-vertical platform. Less eye-popping is the “hole Lotta Shakin'” number from the now-closed “Viva Elvis.” A segment from “Love” features The Beatles “Octopus's Garden” with troupe members suspended like chandeliers and dripping in white tendrils like floating jellyfish. “For the Benefit of Mr. Kite” boasts a Sgt. Pepper-like master of ceremonies presiding over an assortment of Fellini-esque characters.

Cirque du Soleil live performance in this 3D Blu-ray, are considered the epitome of the ultimate “contemporary circus” and the show draws inspiration from circus styles around the world, usually weaving a very loosely-structured storyline in the process. In other words: the narrative for ‘CIRQUE DU SOLEIL: WORLDS AWAY’ is mostly meant as an excuse to stage a variety of Cirque du Soleil set pieces and routines, which were captured using James Cameron's PACE Fusion 3D camera system and wow does it work for me, spectacularly.

That said, James Cameron's PACE Fusion 3D system is great for expansive and immersive visuals, which “Worlds Away” should offer in loads. Similarly, it's impossible to not admire the athleticism of Cirque du Soleil performers and marvel at how often they're but a single misstep away from greatly injuring themselves; obviously, you won't have to worry about that happening in this 3D Blu-ray. Anyone who's ever wanted to see a Cirque du Soleil live stage performance, but never been able to for whatever reason, that it is too expensive, no nearby location: this is the way to go.

It's not much of a spoiler to reveal that Mia and The Aerialist eventually are reunited, and we finally get the chance to see them become active participants, thanks to a beautiful stunning airborne aerobic acrobatic performance. Fireworks signify the explosion of romance in the air, and the film then comes to an abrupt conclusion. The cast even takes bows, over end credits set to The Beatles “All You Need is Love.”

BEING FOR THE BENEFIT OF MR. KITE (Composed by John Lennon / Paul McCartney)

GET BACK (Composed by John Lennon / Paul McCartney)

WHILE MY GUITAR GENTLY WEEPS (Composed by George Harrison)

ALL YOU NEED IS LOVE (Composed by John Lennon / Paul McCartney)

3D Blu-ray Image Quality – This is a combination Andrew Adamson and James Cameron production, so, as to be expected, ‘CIRQUE DU SOLEIL: WORLDS AWAY’ was an original high definition 3D production shot with the PACE Fusion 3D system. It comes to this 3D Blu-ray with a stunning 1080p encoded image and an aspect ratio of 1.78:1 which is totally awesome. Like most productions from ‘AVATAR' to the more recent ‘Life of Pi' which again is shot with the PACE Fusion 3D system, and gives the 3D a totally natural and gorgeous vision. In the very opening scene, there is a bit of a pop-up book look, and, on my display, some issues with crosstalk. However, once we move to the Circus Maximus and beyond, these issues dissolve and we are given a strong 3D effect with great depth. In 2D, the image is strong as well, offering a lot of detail and texture with no anomalies to speak of.

3D Blu-ray Audio Quality – ‘CIRQUE DU SOLEIL: WORLDS AWAY’ features a dazzling 5.1 DTS-HD Master Audio Surround soundtrack. It's smooth but also aggressive, making extensive and natural use of the surround channels in every scene. Musical delivery is precise, showing great clarity and seamless flow around the stage. The track makes use of a positive, balanced low end, whether a rumbling train, which displays great sound imaging that moves from one side to the other or in support to the music. The film is littered with all sorts of distinct, well-placed, and demonstration-worthy moments that bring the world to life and are guaranteed to put even the best sound system through its paces. This is a marvellous listening experience that alone is worth the price of the 3D Blu-ray disc.

Special Feature: Making Worlds Away [2012] [1080p] [1.78:1] [2:26] Here we get an in-depth look at the amazing fantasy presentation of Cirque du Soleil and we get an interesting perspective from the likes of James Cameron [Executive Producer]; Andrew Adamson [Producer/Writer/Director]; Erica Linz [Mia] and Martin Bolduc [Producer]. Despite it not being a very long special feature, it is still an interesting look at what makes Cirque du Soleil so magical and spectacular.

Special Feature: A Day in the Life with Erica Linz [2012] [1080p] [1.78:1] [13:24] Here we get another intimate look behind-the-scene on how the artists go about training for the acrobats and visual presentation of Cirque du Soleil and of course the main presenter is the main female character in the show, which of course is Erica Linz. We also get introduced to the other acrobatic performers, who are Pierre-Luc Sylvain; Kyle DesChamps and Cheetah Platt. We also get to see behind-the-scene on how the filming was produced for the show. Contributions included: Andrew Adamson and James Cameron.

Trailer: Cirque du Soleil Las Vegas Commercial [2012] [1080p] [1.78:1] [1:01] This is a very spectacular commercial, showing off what makes Cirque du Soleil so special, magical and awesome, that takes you into a fantasy world we would all love to be in. What a shame it was not in 3D? 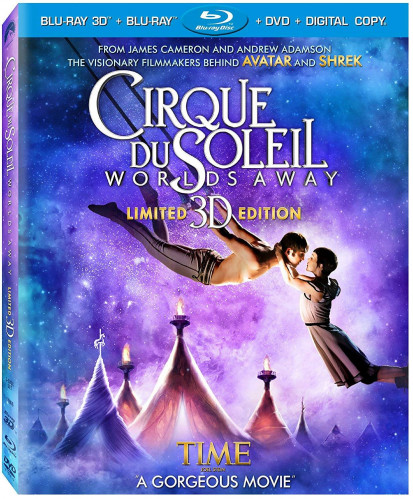