More hilarious than ever, and packing a slew of special features, including behind-the-scenes documentaries, commentary and deleted scenes, it's the insightful, delightful film about cowboys, careers and midlife crises starring comic genius Billy Crystal and OSCAR® Winner Jack Palance.

Thirty-nine-year-old New Yorker Mitch Robbins [Billy Crystal] is tired of his job and bored with his life. So he and his two best friends [Bruno Kirby and Daniel Stern] trade their briefcases for saddlebags and set out to find freedom and adventure herding cattle under the wide New Mexico sky. But what they discover instead is scorching sun, sore backsides...and more about themselves and each other than they ever thought possible.

Andrew's Blu-ray Review: ‘CITY SLICKERS’ won Jack Palance an OSCAR® and gave Billy Crystal some of the best material of his Oscar-hosting career, thanks to Jack Palance's memorable acceptance speech, complete with one-armed push-ups. It was a fitting outcome for a film that mined big laughs from serious subjects: mortality, fatherhood and true friendship, all within a gentle parody of a Western. One of the pleasures of ‘CITY SLICKERS’ is that it's a Western created by people who never imagined themselves making one, but did it anyway for sheer love of the genre.

The film centres on three men in their late thirties who've been friends since childhood. Mitch Robbins [Billy Crystal] works in the ad department of a New York radio station, lives on Roosevelt Island with a wife and two kids and feels that life has passed him by. Phil Berquist [Daniel Stern] manages a supermarket, married the boss's daughter Arlene Berquist [Karla Tamburelli] and has regretted it ever since. Ed Furillo (the  late Bruno Kirby], puts in one of his finest  performances who sells sporting goods and, to the shock of his two friends, has finally gotten married after years of serial dating to a much younger woman Kim Furillo [Walker Brandt] who models for underwear ads. Ed is also an adrenaline junkie who's constantly goading his two friends into increasingly dangerous “fantasy  holidays.” As the film opens, they're running with the bulls in Pamplona, Spain.

As a birthday present, Phil Berquist and Ed Furillo give Mitch Robbins a two-week stay at a Colorado ranch where they get to be real cowboys, and Barbara insists that her husband go, so that he can find whatever he's looking for. Before you can say “dissolve!” the film heads west to a John Ford territory? After a few days' training, Curly leads everyone on a cattle drive from New Mexico to Colorado. Adventures ensue, some comic, some dangerous, many of them both. For example, a proper Western requires a stampede, and ‘City Slickers’ provides one that begins and ends with a punch line. But it's no laughing matter while it's happening, and the actors did it for real without stunt doubles or visual effects. The same is true of the sequence where Mitch Robbins, Phil Berquist and Ed Furillo have to drive the herd across a river. It's every bit as dangerous as it looks, and the actors did it themselves.

Director Ron Underwood juggles these characters effectively, keeping the balance just right, but the film had a secret weapon behind the camera. Its cinematographer, Dean Semler, had just won an OSCAR® for his work on ‘Dances with Wolves,’ and there is no one working today who is more skilful at capturing the menace and majesty of remote locations. Throughout the latter portions of ‘CITY SLICKERS,’ Dean Semler's cinematography ability to infuse the frame with a rugged sense of the landscape provides essential context to the characters' emotional drama.

Some of the jokes in ‘CITY SLICKERS’ have dated somewhat, especially with the routine about TV programming a VCR was funny at the time I viewed the film in 1991 will probably never again elicit the belly laughs I remember with the audiences in the cinema – but most hold up fine, because they arise from universal anxieties. Did I make the right choices in life? If I didn't, what can I do about it? What should I do with the limited time left? What's most important to me? The genius of ‘CITY SLICKERS’ is to address these questions by regressing its three lead characters back to their childhood playing cowboys and letting them find answers in the shadow of an icon from the Old West.

WHERE DID MY HEART GO? (1991) (Composed by Marc Shaiman) [Performed by James Ingram]

Blu-ray Image Quality – The Blu-ray of ‘CITY SLICKERS’ presents a richly detailed image that has been neither artificially sharpened nor. It's a film-like image that may strike some viewers as “soft,” but fully preserves all the rough detail of rocks, cliffs, dust, cattle hides and Curly Washburn's leathery visage. Black levels are generally excellent; with only minor occasionally evident in scenes where the exposure clearly had to be “pushed” to obtain certain effects. Even the scenes at night have the warm yellow and orange of campfires, and the skies are purple, a phenomenon that I have been told happens in New Mexico. Please Note: Amazon and the back of the Blu-ray Cover states that this is a Region A/1 Blu-ray disc, well this is false information, because as you will read above it is in fact an All Regions Blu-ray disc.

Blu-ray Audio Quality – ‘CITY SLICKERS’ was originally released in Dolby Surround, and its first DVD included that track as an option. Presented here in 5.1 DTS-HD Master Audio and the soundtrack has none of the artefacts often heard when discrete tracks have to be “extracted” from a surround mix. Pans from front to rear and left to right are clean and very effective, especially during the cattle stampede, and dialogue remains firmly anchored to the centre channel, without any of the echo or hollowness that remixing often creates. Typical ambient sounds such as raindrops or hoof beats occur naturally in the surrounds without calling too much attention to themselves. ‘CITY SLICKERS’ isn't an action spectacular, but if you didn't know otherwise, you'd think it was specifically made in 5.1. Surround mix

Audio Commentary: Commentary with Director Ron Underwood, Actor/Producer Billy Crystal and Actor Daniel Stern: Here we have the cast and crew reuniting to watch the film together after almost eighteen years, the director and two co-stars share an easy and affectionate rapport and an obvious appreciation for the film's longevity. They swap stories and trade memories about the production. A fair number of anecdotes relate to Jack Palance, but just as many involve the challenges of working on horseback and acting while riding. This audio commentary starts off fantastic, but sadly runs out steam by the time we get to the middle part of the film, and then suddenly starts to rebound towards the end of the film. Director Ron Underwood, Billy Crystal and Daniel Stern all have really good insights and fond memories of working on the film, but get a little too caught up in watching the film once the cattle drive gets underway.

Special Feature: Back in the Saddle: ‘CITY SLICKERS’ Revisited [2008] [1080i] [1.78:1] [28:59] This documentary recounts the origin and production of the film in substantial depth. In this retrospective, the director and cast reminisce about the film, the characters, the shooting locations, and the cast. They provide some entertaining stories about the production, and also talk about why the movie still remains so popular nearly 20 years later. Includes behind-the-scenes footage, and interviews with screenwriters Lowell Ganz and Babaloo Mandel, director Ron Underwood, director of photography Dean Selmer, and stars Billy Crystal [Mitch Robbins], Daniel Stern [Phil Berquist], Patricia Wettig [Barbara Robbins], David Paymer [Ira Shalowitz], and Helen Slater [Bonnie Rayburn]. In a classic example of how little appreciated technical personnel often are, one of the industry's leading cinematographer is the only person whose name is misspelled in the elaborately animated on-screen identifications.

Special Feature: Bringing in the Script: Writing ‘CITY SLICKERS’ [1991] [1080i] [1.78:1] [20:59] Constructed from the same batch of interviews, this documentary focuses on the script-writing process. The original idea came from Billy Crystal, who brought it to Babaloo Mandel and Lowell Ganz to develop and stayed on as an unaccredited co-writer. The three of them discuss various elements of the story and how they worked together.

Special Feature: A Star Is Born: An Ode to Norman [1991] [1080i] [1.78:1] [6:14] The cast and filmmakers talk about filming the calf birthing scene, and then the cast provide their own guesses as to what happened with Norman’s career after the film. Includes behind-the-scenes footage, and interviews with director Ron Underwood, screenwriters Lowell Ganz and Babaloo Mandel, and stars Billy Crystal, Daniel Stern, Patricia Wettig, David Paymer, and Helen Slater. Norman is the name that Billy Crystal gives to a calf born during the cattle drive. This documentary breaks down the scene of Norman's birth, which involved elaborate prosthetics and was shot in three different locations.

Special Feature: The Real City Slickers [1991] [1080i] [1.78:1] [8:55] Here we get to head to a real cattle ranch like the one portrayed in ‘CITY SLICKERS’ really does exist, and this documentary provides a brief tour of the Colorado Cattle Company & Guest Ranch. Those interviewed include ranch owners Penny and Mats Persson, cowboy Tim Hastings, and several of the other guests at the ranch.

Special Feature: Deleted Scenes [1991] [1080i] [1.78:1] [2:48] According to director Ron Underwood, there was very little excess footage shot for ‘CITY SLICKERS,’ but two scenes are included, both of which would have occurred near the end of the film. The first is preceded by an introduction from Ron Underwood, who continues to talk through the scene. The second is introduced by Babaloo Mandel and Lowell Ganz, which plays without further commentary. In both cases, the explanation for removing the scene is compelling.

Finally, ‘CITY SLICKERS’ deals with everyday issues of living in a totally unforced way that doesn't get in the way of the brilliant humour, and yet sets the movie up for a genuine emotional payoff at the very end. And the male bonding among Billy Crystal, Daniel Stern and Bruno Kirby is unforced and convincing. There are so many ways this film could have gone wrong, with gratuitous action scenes, forced dialogue or contrived showdowns, that it's sort of astonishing, how many ways it finds its way into our heart in making a brilliant entrancing film that has always been a big favourite of mine and now seeing it in the Blu-ray format brings a fresh joy to behold, despite its age, it has a quality that always brings a joy to me every time I have seen this film and it all helps, especially with the superb and cracking script from Babaloo Mandel and Lowell Ganz. If you want to get the same feeling everyone else who loves this film, especially from the comments with the people in the “The Real City Slickers” documentary, who echo the thoughts of mine and everyone who loves this extremely enjoyable funny film. But one sad fact, I just wish they would release ‘City Slickers 2,’ as it would be a great companion to this particular Blu-ray disc, so come on 20th Century Fox, so get your act together post haste, as I do not understand what the delay is? But despite this last comment, I am still very proud to add this comedy classic film to my Blu-ray Collection. Highly Recommended! 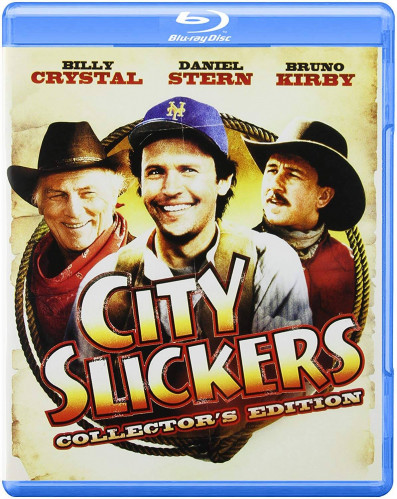 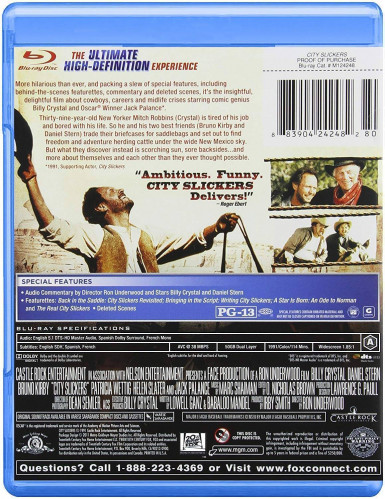