Arnold Schwarzenegger returns with a vengeance in the sword and sorcery adventure ‘CONAN THE DESTROYER.’ The powerful hero Conan [Arnold Schwarzenegger] has been commissioned by evil Queen Taramis [Sarah Douglas] to safely escort a teen princess [Olivia D'Abo] and her bodyguard Bombaata [Wilt Chamberlain] to the magic Horn of Dagon. Conan soon discovers, however, that the queen plans to sacrifice the princess when she returns and inherit her kingdom. Now Conan and an unusual group of allies, including the eccentric Akiro “The Wizard” [Mako Iwamatsu] and the wild woman Zula [Grace Jones] must defeat both mortal and supernatural foes in an epic, sword-wielding battle with the fate of the entire world at stake and the extinction of mankind.

FILM FACT No.2: Deleted Scenes: In the film, a camel is knocked to the ground, and after struggling to get back up, its hind legs are drawn forward with wires so that it is forced to sit down before falling to the ground. This sequence was cut from the UK version, as is a double horse-fall in the opening battle. To secure a PG rating, Sarah Douglas said several scenes involving her character were cut, including a sex scene with Schwarzenegger, slapping Chamberlain, a virgin sacrifice, and the seduction of a statue. Shooting took place in Mexico from the 1st November, 1983, to the 10th February, 1984.

Andrew’s Blu-ray Review: Arnold Schwarzenegger returns with his breakthrough role as ‘CONAN THE DESTROYER’ the mythical muscle-bound hero but the kitsch magic of the John Milius original is missing this time around. However, the requisite number of ugly villains, beautiful temptresses and doe-eyed heroines are present and correct, Arnold Schwarzenegger doesn't have much acting to do and director Richard Fleischer keeps the often violent action flowing smoothly. Look out for Grace Jones as a lethal warrior.

In the career of Arnold Schwarzenegger, it’s fair to say he’s had two great roles were ‘The Terminator,’ the unstoppable killing machine that eventually turns kind of good with ‘Conan the Barbarian.’ The Austrian born bodybuilder wanted to become a Hollywood star, and was very smart about building his career, but those early films were where he shined brightest. The two Conan films have now hit Blu-ray, and it’s a lot of fun to go back and watch him do what he did best.

This ‘CONAN THE DESTROYER’ film does not have the scale of the last film, but it does have more money than the Italian imitation knock-offs that came around this time, and though Arnold Schwarzenegger is not as well used in this film, but despite this Arnold Schwarzenegger is still perfect for this role. Watching it again, after watching on my inferior DVD, I realise that whenever I think of an open wound, or missing tooth, I think of the image of the final monster’s removed horn, looks even more realistic on this re-mastered Blu-ray disc. Some of images I witness years ago on the DVD have a staying power that is transcendent of one’s initial viewing. Watching it again, that moment will still grip you.

There's a lot of talent in this film. Jack Cardiff's elegant photography lends all the more impact to the striking landscapes and gives the palace scenes something of the quality of the great Greek-set sword and sandals epics. There's still that thrilling Basil Poledouris composed music score and there's some great creature work by Carlo Rambaldi. The one good aspect of the film is the presence of singer Grace Jones in one of the handful of film appearances she made in the mid-1980s. Grace Jones is not a particularly good actress but whenever Grace Jones is on screen projects a raw savagery, like she is like a wild animal that needs to be caged. Although the filmmakers, seemingly somewhat daunted by such a strong female presence, have to sadly dumb her down with a sexist scene where she screams at the sight of a mouse.

‘CONAN THE DESTROYER' makes exceptional fine entertainment for all fans of Arnold Schwarzenegger and especially if you enjoy films of violent, simple-minded genre of this calibre. Moreover, there are monsters and wizards and clanging metal weapons ringing to the tune of Basil Poledouris brilliant film score music that stays with you long after you’ve forgotten the story. ‘CONAN THE DESTROYER,' which presents more “mature” storytelling and filmmaking. Richard Fleischer and Jack Cardiff make this fantasy film more enjoyable, and most watchable, which to me is total “guilty pleasure” viewing experience of a B-Movie fun. Like when Conan and his adventuring party venture into the desert and find a temple hewn into the side of a mountain, a world of fantasy awaiting them underneath the white, sun-bleached rocks, ‘CONAN THE DESTROYER' is a rollicking and imaginative film that’s been buried beneath nearly 30 years of bad press, but has now been resurrected for a new generation to really this fantasy film to enjoy and especially now in a totally stunning remastered glorious 1080p image experience.

Blu-ray Image Quality – Universal Pictures has once again given us a stunning remastered film in glorious 1080p encoded image transfer to give us a new lease of life with this 1984 film and on the whole, looks excellent with high definition Blu-ray. The transfer displays outstanding clarity with distinct details of fine lines and textures throughout. With the close-ups, facial complexions appear healthy and natural with plainly visible blemishes and pores. The picture comes with spot-on contrast, giving the movie a youthful and energetic appeal. The colour palette is bold and full-bodied, adding to the overall quality of the image. Black levels are also accurate and true with strong shadow detailing, except in a couple scenes with slightly poorer resolution. Noise reduction has been applied to clean up the transfer a bit, but used very sparingly and barely worth mentioning. Film grain remains thinly intact and consistent, providing the movie with a great cinematic appeal.

Blu-ray Audio Quality – Universal Pictures has once again done us proud and given us a totally new experience with this 1984 film with the upgraded awesome 5.1 DTS-HD Master Audio experience. The dialogue is for the most part well positioned and perfectly intelligible; however, there are minor moments when the voices of actors don't quite match their lip movements, like with the conversation with Wilt Chamberlain, Olivia d'Abo's voice suddenly echoes while out in the open, riding on horseback and probably stems from the original recording. Again the 5.1 DTS-HD Master Audio soundtrack exhibits a clean and sharply-rendered dynamic range with a healthy low-end. It's a front-heavy presentation with great balance and fidelity, providing the imaging with an attractive, spacious feel. Once again, Basil Poledouris composed music score makes best use of the surround mix, filling the soundstage with warmth and brilliant differentiation of the orchestral instruments. The music also bleeds very lightly into the back speakers, making this a nice and satisfying soundtrack to a fantasy-adventure favourite, so overall it does its job effectively and efficiently.

Special Feature: BD-LIVE: Explore more bonus features where you can access even more through your Internet-connected player to watch exclusive content, the latest trailer and even more! Powered by BD-LIVE!

Special Feature: HOW TO: View these user guides to get more out of your Blu-ray Experience.

Special Feature: MY SCENE: Universal Pictures MY SCENE feature makes it easy to create your own personal collection of favourite scenes while watching the film on your Blu-ray player. Using the remote control or the Dashboard button, press the GREEN button to add a bookmark.

Special Feature: D-BOX MOTION CODE: This Blu-ray disc is enabled with D-BOX MOTION CODE. If you are equipped with a D-BOX integrated motion system, you will be able to experience a whole new dimension while watching this film.

Special Feature: Pocket BLU app: Use your tablet or smartphone to control the Blu-ray features and watch content on-the-go anywhere and anytime! App available for iPad, iPhone, Android and more!

Finally, ‘CONAN THE DESTROYER' is the sword-and-sorcery sequel with Arnold Schwarzenegger and Mako Iwamatsu reprising their roles. Sarah Douglas, Grace Jones, Wilt Chamberlain, Tracey Walter and Olivia d'Abo join the fantasy quest to defeat a religious cult from awakening a demon god and ruling the world. This film directed by Richard Fleischer is full of fun, escapism but falls somewhat short of offering the same engaging level of adventure as its predecessor. The Blu-ray arrives with an excellent image presentation and a good audio experience, though it also comes with one or two minor weaknesses. On the whole, this bare-bones package is better suited for the high adventures of the bargain bin, but if you are a massive fan of Arnold Schwarzenegger, like me, then this is the film for you and one you should upgrade from the previous Blu-ray disc releases. Highly Recommended! 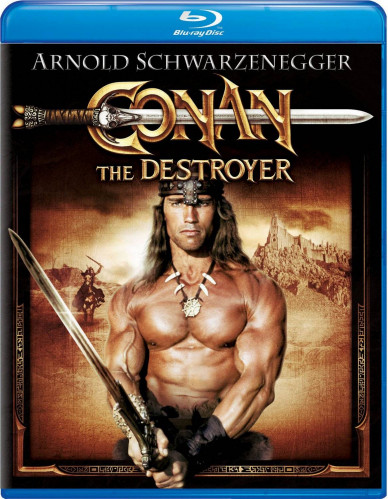 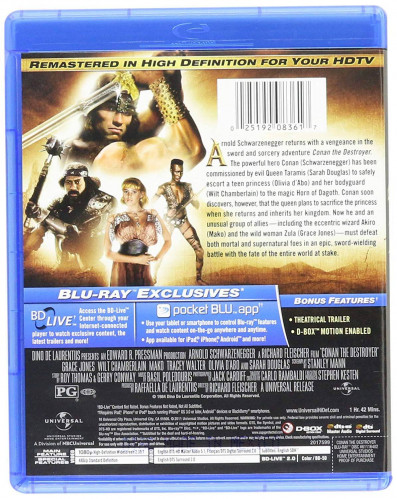