From the visionary director of ‘The Nightmare Before Christmas,’ and based on Neil Gaiman's best-selling book, comes this spectacular stop-motion animation adventure! Coraline Jones [Dakota Fanning] is bored until she finds a secret door and discovers an alternative, better, version of her life on the other side. When this seemingly perfect world turns dangerous, and her other parents, including her Other Mother [Teri Hatcher] try to trap her forever. Coraline Jones must use her resourcefulness, determination and bravery to escape this perilous world and her family.

Andrew's Blu-ray Review: In the tradition of the Brothers Grimm and the stop-motion animation style of my childhood, 'CORALINE 3D' is a much more serious film than the trailers would have us believe. There's no way around this other than to write that the film is a children's tale not really meant for children. Teetering between fantasy and horror, the nightmare-inducing puppetry is only half of the scare factor. The other half, and arguably its best feature, is a story that is actually creepy and frightening - something that's sadly missing from modern horror in general. Henry Selick, the director of 'The Nightmare before Christmas' brings life to Neil Gaiman's award-winning novella, with a stunning visual mastery that somehow makes all the grotesque imagery rather attractive and captivating.

Feeling bored and neglected, Coraline Jones [Dakota Fanning]   decides to explore her new apartment while her parents Mel Jones [Teri Hatcher] and Charlie Jones [John Hodgman] continue in their time-consuming work. Walking the grounds, she meets the odd Wyborne 'Wybie' Lovat [Robert Bailey, Jr.], the two eccentric downstairs neighbours Miss April Spink [Jennifer  Saunders] and Miss Miriam Forcible [Dawn French],  and the Russian gymnast who lives upstairs Mr. Sergei Alexander Bobinsky [Ian McShane]. Back inside the house,   she discovers a mysterious secret door that leads to a parallel universe much like her own. Only there, everyone at the Pink Palace Apartments lives to endlessly provide and entertain her. But soon, the black buttons, which serve as their eyes in this world, give way to more sinister intentions. With the help of a talking black cat [Keith David], Coraline Jones must defeat the grasps of this "other world" and get back home.

There are no surprises or twists in the plot and it's all very familiar ground, in fact, but 'CORALINE 3D' is nonetheless a loving tribute to the art of filmmaking itself. We're not watching the story as much as musing and gawking at the beautiful artistry that went into blending the charming and delightful with the creepy and frightful. There is such a great amount of attention placed on the details that it becomes almost trance-like, and it all works to enhance the narrative. We don't need anyone to explain that Coraline Jones's parents are busy. They just are. We learn more about the downstairs women by looking at pictures and their collection of taxidermy Scottish Terriers. And watching the world of her Other Mother change appearance is scarier than requiring an explanation for her existence.

Again, this may be more than what younger viewers can handle, despite giving the impression of being a children's movie. All the same, the film does arrive with the unsurprising and inevitable moral conclusion typical of the genre. And this is not so much a hindrance as it is expected five minutes into the movie. No matter, 'CORALINE 3D' knows how to play its cards right and lives up to that cautionary proverb we grew up hearing from parents and now repeat to our own children: "Be careful what you wish for." With an animation style that's both adventurous and strange, Henry Selick's newest work of art is very much a modern-day fairy tale and one which will only grow in appreciation with time. It's fanciful, imaginative, and contemplative. But it's also weird, eccentric and even freakish. This is a really terrific mix of fun 3D animation film.

Not since 'A Nightmare Before Christmas' has an animated film been so visually captivating. But rather than repeating the success of its predecessor, Henry Selick's 'CORALINE 3D’ [2009] gives audiences a darker undertone, where wish-fulfilment suddenly turn into true a nightmare. It's a beautifully immersive experience about a young girl learning to be clever, resourceful, and mature about her outlook on life. Only, parents, be sure that the little tykes can handle some of the film's more disturbing aspects.

Blu-ray Image Quality – Almost two years since 'CORALINE 2D' first appeared in high definition, Pictures UK now brings the highly-imaginative stop-motion film to the 3D realm. The results are terrific though not quite the knockout experience I expected and not without some minor issues along the way. On the other hand, the majority of the 1080p image is strong and a great treat for the eyes. Presented in its original 1.85:1 aspect ratio, the picture arrives with pitch-perfect contrast levels, providing wonderful clarity and visibility of things in the distance as well as in close-ups. The finest details are stunningly consistent and distinctly sharp. Textures in various objects are remarkable and incredibly lifelike, which seem to jump out of the screen in many scenes. From individual threads in articles of clothing to separate strands of hair atop each character, everything is crystal clear and superbly detailed. Colours possess an extraordinary pop and energy in spite of the darkened lenses of the shutter glasses. Whether we're in the drab and drained real world or the vibrantly exciting universe of Other Mother's house, the diverse palette on display is vividly saturated and accurate. Blacks are inky and profound with excellent delineation in the darkest shadows. The reason for going over to the 3D version is that the image has now added with a few awesome gimmick shots thrown in for good measure. Some of the best moments are when Coraline enters the little door and crawls through the colourful tube into Other Mother's world. Also, the last half-hour of the movie as that world is slowly dissolving away is when the Blu-ray really shines in terms of three-dimensional depth. So all in all the 'CORALINE 3D' is still a fantastic presentation sure to make many fans and 3D enthusiasts happy with the picture quality.

Blu-ray Audio Quality – The 5.1 DTS-HD Master Audio soundtrack arrives for the animated film 'CORALINE 3D' with resounding clarity, precision, and depth, the sound mix is impressive as it reaches the higher pitches without a loss in detail and an active surround presence that is at a near constant. The front soundstage is expansive and evenly balanced with crystalline dialogue reproduction and wonderful transparency. Atmospheric effects and non-directional cues are sharp and fluid, enveloping the listener convincingly. Interior scenes exhibit terrific spaciousness and acoustics, generating an amazing environment that's eerily authentic. The original score by Bruno Coulais and They Might Be Giants is warm and inviting, using the entire system to draw the audience into this fantastical world. Low bass is richly polish and responsive, adding a palpable realism to each scene and musical number. Accompanying the great 3D picture quality of 'CORALINE 3D' is that the track is simply amazing, offering audiences a terrific and immersive aural experience that matches perfectly the fantastical elements of the film.

Audio Commentary with Director Henry Selick and Composer Bruno Coulais: Director Henry Selick and composer Bruno Coulais discuss various aspects of the film's production, from adapting Neil Gaiman's novella, cast choices, LAIKA's extraordinary animation work, and of course, the musical score. The audio commentary is fairly standard, offering some kind of information you can find elsewhere in the package, but the affability of the two men keeps it from being utterly boring and maintains interest.

Special Feature: Deleted Scenes [2009] [1080p] [1.78:1] [9:00] With a brief introductions from Henry Selick, this collection arrives with finished animation and voiceovers, which was a nice surprise. Only two scenes were actually removed from the final product, while the rest are mostly extended sequences that really don't affect the narrative either way. Still, they're interesting to watch for anyone curious.

Special Feature: The Making of ‘CORALINE’ [2009] [1080p] [1.78:1] [36:00] There are no surprises in this informative documentary that examines different areas of the film's pre-production and its end result. Henry Selick hosts the majority of the runtime with behind-the-scenes footage showing the cast in recording sessions and the creative team working on the animation. Viewers have a choice of either watching the feature in its entirety or selecting specific areas as individual short segments. Contributors include: Neil Gaiman, Maddy Gaiman, Tom Proost, Dakota Fanning, Jennifer Saunders, Teri Hatcher, Dawn French, John Hodgman, Georgina Hayns, Jeremy Spake, Suzanne Moulton, Deborah Cook, Lee Bo Henry and Matt Sanders.

Special Feature: Voicing the Characters [2009] [1080p] [1.78:1] [11:00] This is a self-explanatory documentary that has Henry Selick and the cast members talking about their experiences working on the film, the various characters, and developing unique voices for each. Contributors include: Keith David, Dakota Fanning, Dawn French, Teri Hatcher, John Hodgman, Ian McShane and Jennifer Saunders.

Special Feature: Creepy Coraline [2009] [1080p] [1.78:1] [6:00] Author Neil Gaiman and director Henry Selick host this rather very short look at the film ‘CORALINE 3D’ and its unique and grim visual elements. Honestly, this is an okay documentary, but it's very brief and easy to sit through. Contributors include: Dakota Fanning, Teri Hatcher and Henry Selick.

Finally, taking audiences into a world where wishes become nightmares, 'CORALINE 3D' is the newest animated film from visionary director Henry Selick. Adapted from the novella by imaginative author Neil Gaiman, the film is a splendid and astounding visual delight with a narrative that's genuinely - and appreciably - terrifying, one that may not work well with younger viewers. The 3D Blu-ray edition arrives with great awesome picture quality, despite a few minor drawbacks in the presentation. The high-resolution audio remains the same awesome experience as before for an animated feature, and the supplemental package mirrors its predecessor. Only those willing to make the jump into the 3D realm will want to add this to their collection, while owners of the previous 2D version will be sort of satisfied with their original purchase, but I feel you are losing a hell of a lot in not going for the 3D awesome experience, which are absolutely stunning and this 3D Blu-ray is such an honour to add to my Blu-ray Collection, as every time I view this 3D Blu-ray, I see other stuff I missed before. Very Highly Recommended! 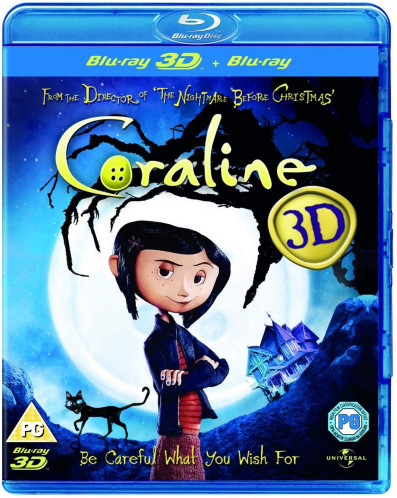 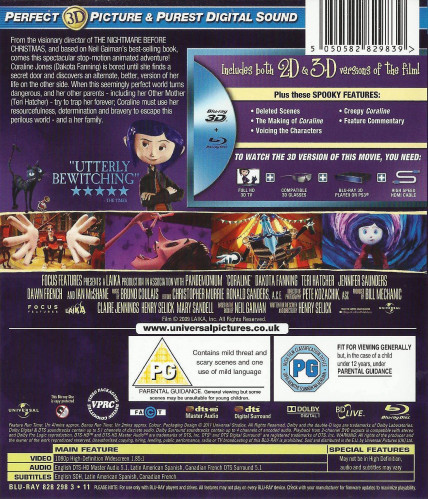